69 replies to this topic

The Howard Heerey/John Love/Barry Joel Chevron B2 returned to racing yesterday at Donington Park in the 1 hour Sports Racing Masters event.
Driven by ex-patriot Mancunian now resident in California, Dr.Ted Carden, the car finished a brilliant first in class and fifth overall in it's first race in 34 years! Apart from a few to be expected minor problems, the car ran as well as anyone could have hoped for.
Ted is the brother of one time B2 racer (& Grand National jockey!) John Carden. 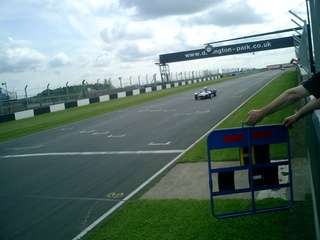 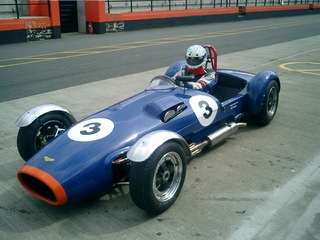 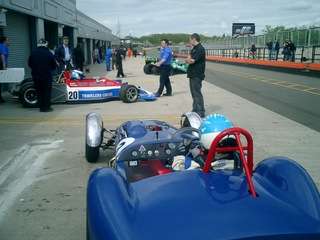 As Ted pulls in to the pits after his race, the March 761 of Katsu Kubota pulls out, and on to win the Grand Prix Masters event, and Katsu's first win in the ex-Ronnie Peterson Italian GP winning car. 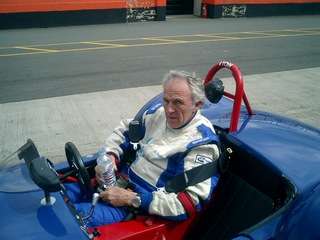 A bit o/t, Ted told me that he was at one time in the distant past, Medical Officer at Goodwood and on one occasion had to extract John Surtees from an inverted 250GTO at Fordwater! 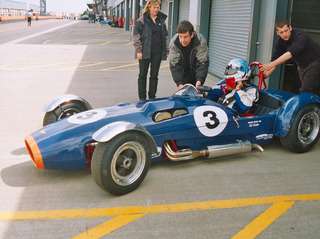 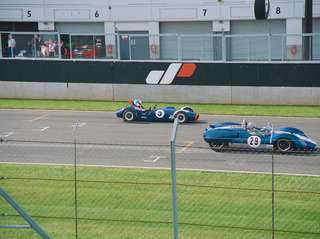 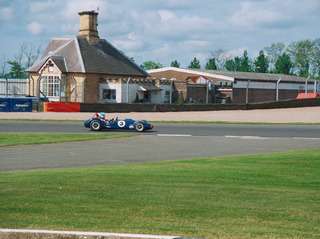 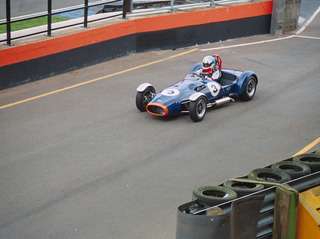 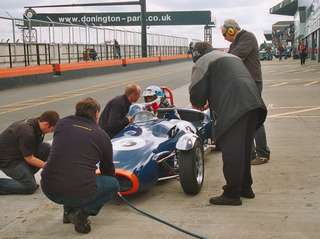 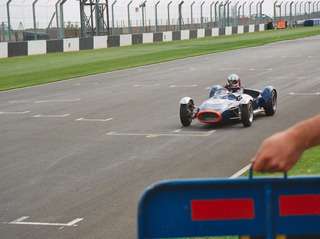 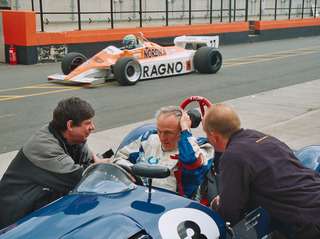 Ted in post-race debrief with Vin Malkie and a Chevron engineer as Mike Wrigley's Arrows A4 prepares to run in the GP Masters warm-up. 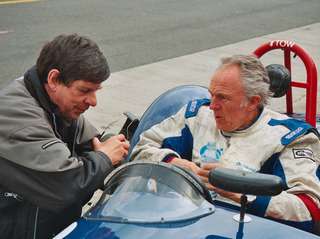 At long last and down to the efforts of Ted Walker at Ferret Fotographics, I am able to post a photo of John Love in the Chevron B2 at Cadwell Park in April 1972!! 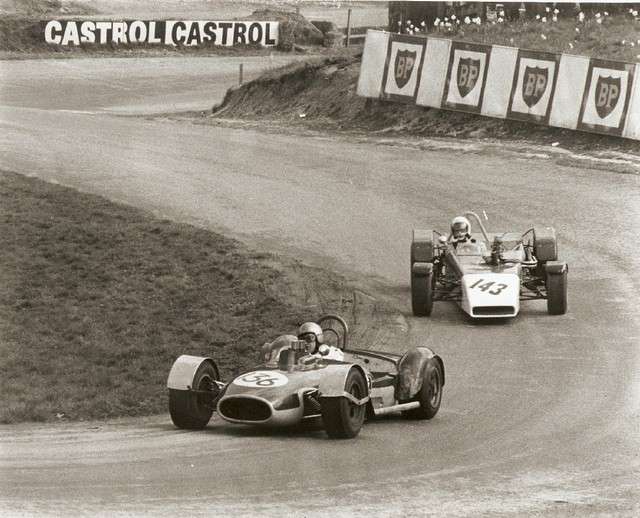 I will ensure John gets this pic. Many thanks for your help Ted, much appreciated!

I managed to deliver the print of the above photo to John in Wombwell, Barnsley today, and he was very pleased to receive it! 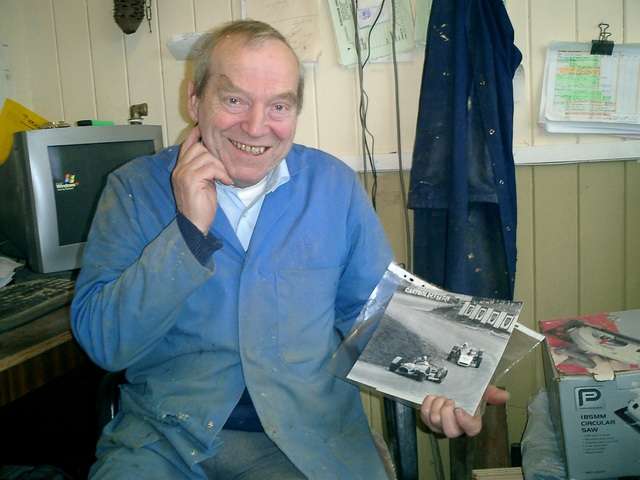 John raced all over the country in his Chevron B2 and Lotus 7 in both the Northern and Shell championships. He also did three seasons with the ex-works spare Le Mans Lotus 11 and raced a fiery TVR with a 7.2 litre Holman & Moody V8! He competed in two Birkett relays with the TVR, once with the official works team. He raced from 1965 - 78.
As previously related, John lost all of his trophies and mementos in a robbery and this is the only pic I've been able to come up with for him so far. I am looking for more pics of his career to post and take to him.

John did relate a story of how a pic of him did make the national press on one occasion when he left the track at the Esso hairpin at Oulton Park at some considerable speed, clearing the banking and dropping down into a field. The only way he could get back was to drive across the field and back into the circuit via a gate, and the photographer gave him his wallet with which he was pictured so as to appear as if John was paying to re-enter Oulton!!! 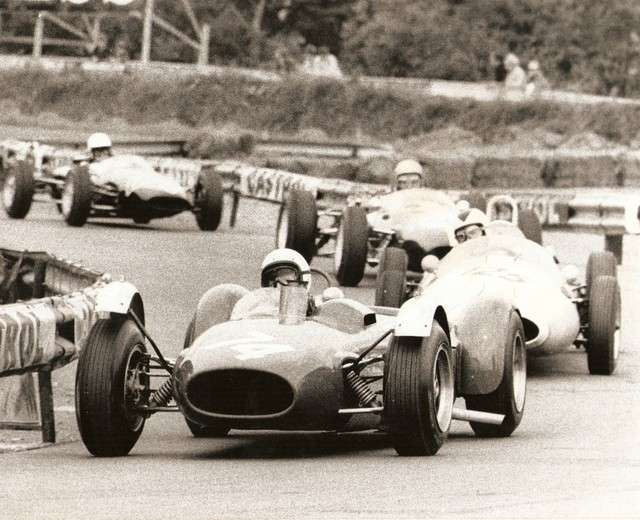 Here is the Chevron B2 prior to John Love's ownership in the hands of it's first owner, Howard Heerey at Mallory in July 1966. This was one of the first appearances of the car that went on to dominate Clubmans racing in 1967 scoring 21 wins and the national championship. Howard's closest rival that season was one Max Mosley in a U2.
John thinks he finally retired the car at Rufforth in 1978, the circuit where he had his first race. That would mean the B2 raced for 13 seasons before going into hibernation.
John tells me that the driver of the other car (143) in the pic with himself in the Chevron perished in a crash at Oulton shortly after this photo was taken, but I cannot recall his name.
I am currently trying to gain access to the late Frank Hall's photo collection in an attempt to find more photos of John's career for him (& other subjects).

(This photo is courtesy of Ferret Fotographics and posted with the kind permission of Ted Walker).

... John thinks he finally retired the car at Rufforth in 1978, the circuit where he had his first race. That would mean the B2 raced for 13 seasons before going into hibernation...

Racing finished at Rufforth in 1977, Tony.

Racing finished at Rufforth in 1977, Tony.

Well at least I can confirm that to John with a degree of authority!

I suspect he actually stopped racing in about 1975 as indicated earlier, but he's a bit hazy about it!

Vin Malkie told me yesterday that he now has both the B1 models and three of the four B2s at Chevron Racing. Vin tells me the fourth is currently in poor condition and somewhat overvalued by It's owner............

How many of the continuation models has he done so far, Tony?
Roger Lund

How many of the continuation models has he done so far, Tony?
Roger Lund

There are no continuation B1 or B2s, Roger. The nearest thing is the roadcar of which I understand only one was made due to quality problems with the South African sub-contractor.

There are no continuation B1 or B2s, Roger. The nearest thing is the roadcar of which I understand only one was made due to quality problems with the South African sub-contractor.

...and is now back in the Chevron workshops in deepest Cheshire

And excelling at it, Roger!

I recently purchased a slide from Ebay (link below) - I'm not sure if it's a B1 or 2, or exactly where / when it was taken, but the white band under the nose is similar (but not identical) to the photo further up the page.

The car in the slide does not appear to have shape in the bonnet to cover downdraft carbs though, and the rollover hoop looks a little 'suspect'

any thoughts on who's car this is? and a good TNF quiz question, where / when was it taken?

My guess is that it's Ken Massey's 1500cc Chevron B2 that was driven by Dave Rees & Don Hulme in the BRSCC '500' Club Championship Race & the Formula Libre race at Oulton Park 30th August, 1969. The number ties up with the programme.

So was that a team race , Tony, hence the 21A? I have not checked Autosport yet.
Roger Lund

Edit.
I knew I recognised the number and car. I have now had chance to check my own files. Wrong driver, wrong circuit, wrong car, wrong year, I am afraid, Tony.

It is John Bromilow in a mk 3 DRW, in the 1966 750MC 6 hour relay race at Silverstone.
The colour on the slide has faded as the car was a rich maroon, unless it was in the morning, as the race was very wet. I have a shot supplied by Ted Walker of John passing the pits.
Roger Lund

So was that a team race , Tony, hence the 21A? I have not checked Autosport yet.
Roger Lund

I have a feeling it was numbered as such because it was running in two races that day. It was in sync for the earlier Libre event, but out of sync for the later Clubmans race, as was Peter O'Sullivan's WRA entered U2. I may be wrong, but I do recall this happening on occasion.

PS I am wrong, but happy to be proven so beyond doubt!

Damn you, Mr Giraffe, you have forced me to open my secret Malkie files and post a less than perfect photo.

This one is going into a book, when I get the time. It is one of a series showing Helen in her first outing in the B1 and is straight from the scanner, hence the smeared water marks on the negative. I was probably at the end of a long evening in the darkroom and headed to the Old Cock to meet Vin for a beer.

Any offers on what is going on in the background? I recall that Helen had a very well-controlled spin on this corner but, having some personal interest, was too busy shouting Jesus H Christ to take the snap. Maybe the car sans front was something to do with this? 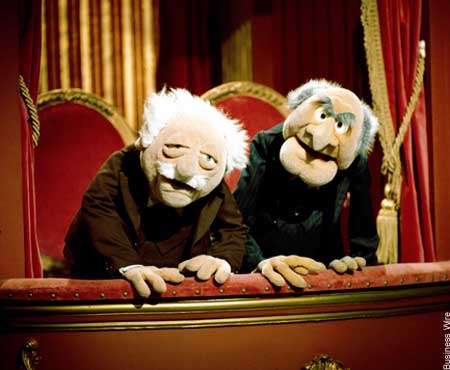 Pete, I first saw Vin Malkie race at Aintree in 1970 in a Formula 4 Vixen, but I'm not sure when he made his track debut.