Great photos here http://plus.autospor...es-of-the-year/ but the cropping is a bit off on "The British drivers pose for a photo-call prior to the British Grand Prix." one:

"but any danger that he would have to relinquish victory to Schumacher was abated when a late safety-car period forced Ferrari to pit both drivers on the same lap."

The safety car was deployed on lap 13 - which isn't what you call "late".

Not an error per se but what about replacing the 2013 Brazilian GP schedule with 2014 Testing schedule?

And, perhaps, the "63 DAYS, 11 HOURS, 59 MINUTES AND 54 SECONDS BEFORE THE AUSTRALIAN GP" with the appropriate Test gap?

Hmmm. Sounds like someone's been caught with a Midas touch...

"I know where we are now today with the car and we will still be fighting, hopefully for some podiums his year."

This is quite wrong. The link redirects to a news with the correct heading, but the one shown in the front page is wrong:

http://www.autosport...t.php/id/112403: "The best lap time of the test set by Kevin Magnussen was eight seconds off the best ever lap time set in testing at the Spanish track by Michael Schumacher back in 2004."

Still, even Jenson's time is not eight seconds faster than Magnussen's time of 1.23.276. And it would have nice to put things a bit in perspective: those 2004/2005 times were made when the 'testing season' as already in full swing and the V10 almost overdeveloped, while last week's tests were just a very early tryout session. And for some perspective it would have been nice if last year's test FL was also mentioned: Felipe Massa'1.17.879.

David Evans wrote in his story "Rally Sweden denies it needs to move" the following: "Rally Sweden (...) The World Rally Championship's only winter round..."

I have suddenly been unable to Quote or Multi Quote in my replies. I have tried in a couple of Forums and it is the same. This is particularly annoying as when trying to either use a previous comment to add weight to my input or when using a quote to highlight an error I cannot.

is totally wrong. The article is about victories that missed in a painfull way. Now an accident was painfully avoided: that is a near-miss, almost an accident.

If this is supposed to say 'advantage advantage' in a little play on words on the twin-tusk thing, carry on. 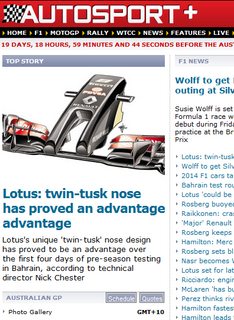 I cannot pay my subscription this year (my cards changed numbers last year) and I am unable to change my card numbers on the Autosport subscriber pages. I have emailed Autosport three times via their subscription website, but I have not had any replies at all - including email replies.

An email address posted here for me to allow access to Autosport (or sent to me) would be appreciated.

I sent you a private message earlier this morning - has that not reached you?

Is anyone else having Firefox problems today? The main forums look fine, but threads are appearing as really basic text, all left aligned

There's a typo in this story:

According to the MSA wesbite, this should be '10 Golden Rules for Safer Motoring’:

"Williams is understood to have a seven-year contract with Mercedes, which could mean this is its longest period of engine stability since its early days running Cosworth power."

The points table is not updated to current season.

Front page, small "GP" info box in bottom right corner says that the sessions for the Malaysian GP are on Thu, Fri and Sat local time. When I click on "Convert to your timezone" it changes into the correct Fri, Sat and Sun CET times.

You state that Ericsson finished 22nd, he finished 14th.

Also, the error in my post above is there also for the Bahraini GP info box.

What is the 'effing point of adverising/displaying that a service is *LIVE NOW* when it is not/no link to it (http://live.autosport.com/.) I swear, that this site is becoming more amaturish as the years roll by.

What is the 'effing point of adverising/displaying that a service is *LIVE NOW* when it is not/no link to it (http://live.autosport.com/.) I swear, that this site is becoming more amaturish as the years roll by.

I agree ... this site is getting so bad... poorly run and no thought to the changes they make other than to reduce the value.

the race link on F1 page takes you to a article about Sterling Marlin from 2001...

"Michael Schumacher once identified Mika Hakkinen as the driver he most feared, yet Hakkinen's threat to the German's dominance didn't really extend beyond the 1998/'99 seasons"

I think this does not give nearly enough credit to Mika's 2000 challenge when he still lead Michael going into the 2000 US GP - what could've happened if his engine had not expired then? At least an even more thrilling finale....

In the article about Red Bull's hearing the spokesman for Mercedes said 'flount' the rules. Should that not be 'flout'?

Flaunting= demonstrating how good you are.

Flouting= having disregard for

Or Flounce: "to go or move in an exaggeratedly impatient or angry manner". Which sounds a bit like what Red Bull have been doing.

Once, way back way more than a decade, almost 15 Years, this was the place we would help our friends from Atlas. Now it is just autosport showing off their own lack of commitment with the site itself, isn't it? imHHHo, of course, before I get banned for this single wholeheartedly truly post... Actually, I didn't say that at all! I didn't post this, at all! Someone got my password and posted on my behalf! Aliens, perhaps!

The Dane starred in Australia, finishing third on the road before being promoted by Daniel Ricciardo's exclusion for exceeding the fuel-flow rate, but has failed to score a point since.

In the Montoya NASCAR story, I think Ryan Blaney will be driving the third car at Kansas and Talladega.

Front page, small "GP" info box in bottom right corner says that the sessions for the Malaysian GP are on Thu, Fri and Sat local time. When I click on "Convert to your timezone" it changes into the correct Fri, Sat and Sun CET times.

Problem is still there for the Spanish GP, it says Thu, Fri and Sat local time (times are correct, weekdays wrong). Clicking "Convert to your timezone" shows them correctly as Fri, Sat and Sun. Interestingly the "Barcelona local time" is correctly shown. Same problem on IE and Firefox browsers.

"Porsche LMP1 technical director Alex Hitzinger has revealed that the same problem had already been encountered in pre-season testing and that a stronger driveshaft was already in manufacturer ahead of Spa."

And then later in the same report...

"The hybrid system problem that lost the fourth-placed #14 Porsche 919 driven by Neel Jani, Marc Lieb and Romain Dumas was a result of a false system alarm, according to Hitzinger."

The four times Formula 1 world champion was classified th in qualifying after being hit with a gearbox problem early in Q3.

Minor glitch but the timer for Canadian GP must be off by one day?

Dunno if this falls within the remit of a website error, but the mail@autosport.com email address, as published in the magazine as recent as last week, is constantly bouncing back undelivered.

Dunno if this falls within the remit of a website error, but the mail@autosport.com email address, as published in the magazine as recent as last week, is constantly bouncing back undelivered.

I think that the problem was with the way that it was being forwarded... It should be working again (I've just tested it and it's definitely going to the right people) so let me know if you carry on getting a bounce!

I think that the problem was with the way that it was being forwarded... It should be working again (I've just tested it and it's definitely going to the right people) so let me know if you carry on getting a bounce!


Still bouncing back this afternoon.

Could you forward the bounce message to simon.grayson@haymarket.com please?

Could you forward the bounce message to simon.grayson@haymarket.com please?

I've noticed the email address published in today's Autosport has changed...and is also bouncing back undelivered.

"The withdrawal of the GreenGT hydrogen-powered experimental prototype, which was due to take the Garage 56 slot, three weeks before last year's race left the entry one short of its 56-car capacity."

Not true. The GreenGT was replaced last year by a GTE-Am Porsche entered by Prospeed Competition, because the reserve list still had two entries at that point.

"Race winner Marc Marquez had a similar moment at Turn 1 earlier in the race while trying to take the lead from Valentino Rossi, but backed off as he rejoined the course to enjoy he slotted in behind both Rossi and Dani Pedrosa"

Enjoy? Ensure maybe... and a full stop at the end of the sentence might be a good idea too.

"However, the Italian outfit is wholly committed to F1 - and doing all it can to ensure it had a bright future."

I suspect that should read: 'has a bright future'.

The qualifying and race start times for the British GP in the GP/Facebook/Calendars box are wrong. Both should be 13:00 local time, not 14:00.

Channeling the FOM graphics with Raikkonen currently both fourth and 20th.

In your gallery for the German GP:

You have this photo of Susie labelled as Valtteri

This photo of Felippe is labelled as Susie

this picture: http://cdn.images.au.../1405773148.jpg under the heading McLaren looks like Rosberg's Mercedes, with the Number 6 clearly visible.