Or maybe even July 23rd.

Never on a Sunday in July '65 then? It's a Brier Thomas shot and I reckon the nose off shot above it is of the same car.

I can make out sliding spline versus tubular driveshafts in the first two cars.

Originally posted by SJ Lambert
Never on a Sunday in July '65 then? It's a Brier Thomas shot and I reckon the nose off shot above it is of the same car.

Originally posted by SJ Lambert
Garrie Cooper (car 12) and others.......

I'm surprised you haven't identified the other two Monos, James...

Not that I can this far from home, but I can certainly say that's Alton Boddenberg and his ex-Geoghegan Lotus 32 on the outside of Garrie.

The wheels got bigger?

I hope you're comparing the cars as the comparison of the pics is pretty useless. The photo of Alfie is taken way earlier than the photo of Hunnam. The photo of Millis is much nearer.

I'm surprised you haven't identified the other two Monos, James...

Not that I can this far from home, but I can certainly say that's Alton Boddenberg and his ex-Geoghegan Lotus 32 on the outside of Garrie.

I'd love to ID 'em Ray, but it's beyond me - don't recognise the numbers or helmets. There may well a nose of a third (making a total of 4 Monos in frame with Boddenberg being the dissenter) - the one on the outside immediately behind Boddenberg appears to be a very early car still with the skinny drive shafts - so it mitigates against that particular car being Cook or Keen (and the number on the nose is not in white, so despite the skinny drive shafts, that makes it not the Millis car either - see post 162 for Millis at same meeting).

Could it be Ian Cook on the outside behind Boddenberg...

I suspect the photo was taken on practice day as the main race was run on a very wet circuit. There was a preliminary race on a drier circuit for the littlies, but it was only over five laps and this bunch doesn't represent anything mentioned in the report. I don't think Cooper ran in that race at all.

Could Keen or Millis be wearing a different hat?

Or was it simply not at that meeting?

Was Col Green not running a Mono around this time?

However, there was another race on the programme which included other cars. Not on the grid for the Gold Star event but mentioned in the minor race were:

Of the runners in the main race not mentioned in that report we have:

It is possible that some of these merely ran at the back of the field and weren't mentioned, but I'd think that Champion would not be one such, nor Scotty or even Cooper.

So we have a known field of:

But, frankly, I don't think they would have run. Like Scotty and Champion I would have thought they'd be saving their cars for the 99-miler later in the day.

So were there only eight cars in the other race?

The list above shows only three 1100s, but there could well have been others. A programme for the event would be a handy thing at this stage!

I suggested last night that the pic might come from another meeting, but I don't really think it's possible. I went through the entries for International races and Gold Star meetings and at each of them either Cooper or Boddenberg were not there.

For the record, that's Mike Champion in the Brabham behind Cook, who was destined to have a big spin under the bridge. Mike finished third in the race, a lap down, a very creditable effort.

I still reckon that's Champion ranging up behind Cook in post #173.

I'll have a second go at discerning who is who in the Boddenberg & co. shot a bit later. Could be Cook is rear gunner in that shot.

Originally posted by SJ Lambert
Garrie Cooper (car 12) and others.......

I would be very confident saying it was Noel Riley up on the inside behind Cooper...

Did Gricey ever run his car in a dark colour? There's something about the car on the outside behind Boddenberg that looks a lot like Grice.

The car that's barely in frame isn't an Elfin. Possibly Power's or even Stewart's Rennmax, but it's very hard to say. I'm still convinced it's not in the race.

Do you know whether Deane built that engine up himself?

Do you know whether Deane built that engine up himself?

Sorry, I don't.
I didnt really know anyone at that stage - I was just getting into Vee's and wandering around the paddock with my mouth open.
Did meet Deane socially years later, though.

Purely speculative, but could that US photo have some relationship to a US driver entering the 1966 Gold Star/Australian 1.5litre Championship at Mallala - heats 3 & 4 respectively? Why I ask is that there's a "#11 P Hotchkiss (USA) Elfin Mono 1498 Blue" listed in the event programme.

In fact there's 9 Elfin Monos out of an entry list of 13.

I've recently made contact with Phil's nephew & am now looking forward to seeing a couple of shots of Phil with the car!

I wonder whether they'll be any taken in Australia prior to taking it back to New York.

I recently took these pics of an Elfin Mono at Wanneroo Park--sorry, Barbagallo raceway:

(The car on the left is an F1000, utilising 1000cc motorcycle engines/gearboxes)

Unique rear upper wishbone suggests this is No 1 chassis:

And a good clear shot of the tapered tube used to extend the dampers...

Now, what was that stuff called again?

Ray the thing that I do not understand is why was the taper tube not put on the top of the shock thus lovering the center of gravity, any comments?

It's more in the windstream there.

It's more in the windstream there.


Thanks Ray, yes I understand what you are saying, it was just a thought I had in lowering the CG.

Ray the thing that I do not understand is why was the taper tube not put on the top of the shock thus lovering the center of gravity, any comments?

Unsprung weight.
That design does nothing for me. Later Monos had the wishbones basically paralel with each other didn't they?

Interesting, we now have 3 reasons, wind resistance, centre of gravity & unsprung weight. So my question is out of the 3 which would be the most helpfull in the design of the car?

Yes, unsprung weight comes into it when you consider that he could have gone for a longer damper unit to take up that space...

Also overall weight. But I'm sure that when you look at how that spring is tucked in behind the end of the monocoque that Garrie saw the opportunity to cut wind resistance as the air has to squeeze between the wheel and the hull of the car, as well as flow around the suspension members and halfshaft.

The source of the metal piece used for the purpose is interesting, and many years later its use in a Mileage Marathon car had the heads of the boffins being scratched.

There is a set of four of those pushrods on ebay at the moment for $10. But there are only two chairs with them.

Another shot of Garrie's Mk2 prototype. Shot provided to me by Brian Lear, who received it from Chuck Krueger. 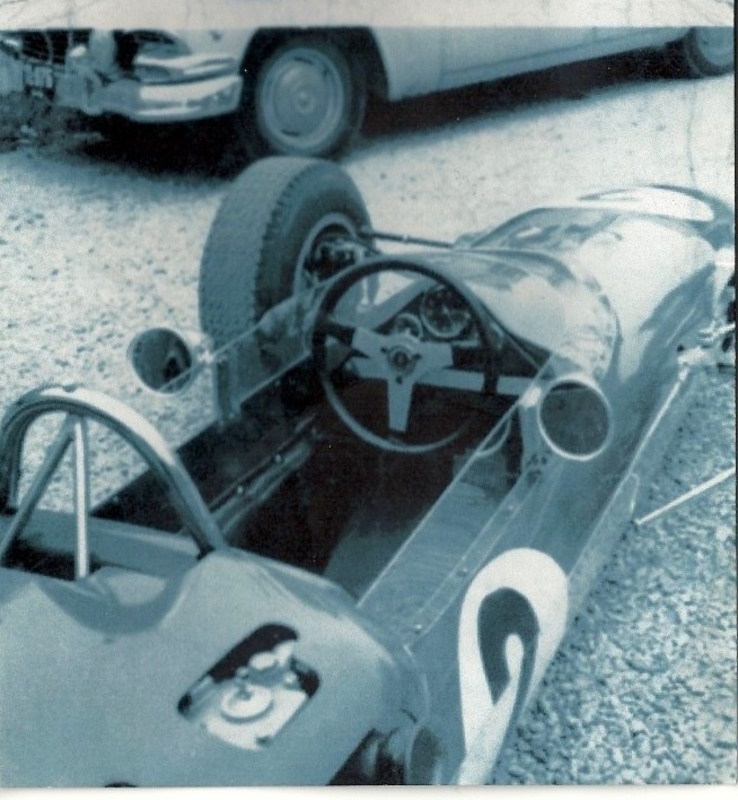 An early announcement for the Mono in Dec 63 RCN. 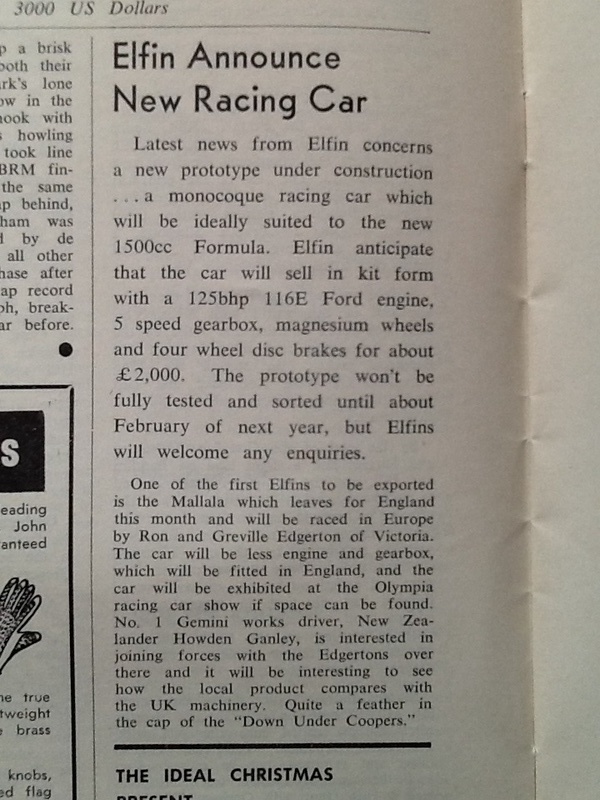 Does anyone recall or can anyone tell me anything about Bill Pile having a spectacular "off" in his Mono on the back straight at Mallala?

James, I'm not sure if this is the incident you are after, but in the December 28, 1964 Mallala report in Feb 65 RCN there's the following.

"Bill Pile spun at Clubhouse corner, went up on the grassy verge to let the crowd go by and broke his rear suspension on an unprotected object."

Thanks Stephen, it might be.  We're trying to nail down when and who's Mono had a "little accident" back at Edwardstown whilst undergoing repairs following an on track incident.......avgas vapours and a torch....... it all turned out ok in the end........... 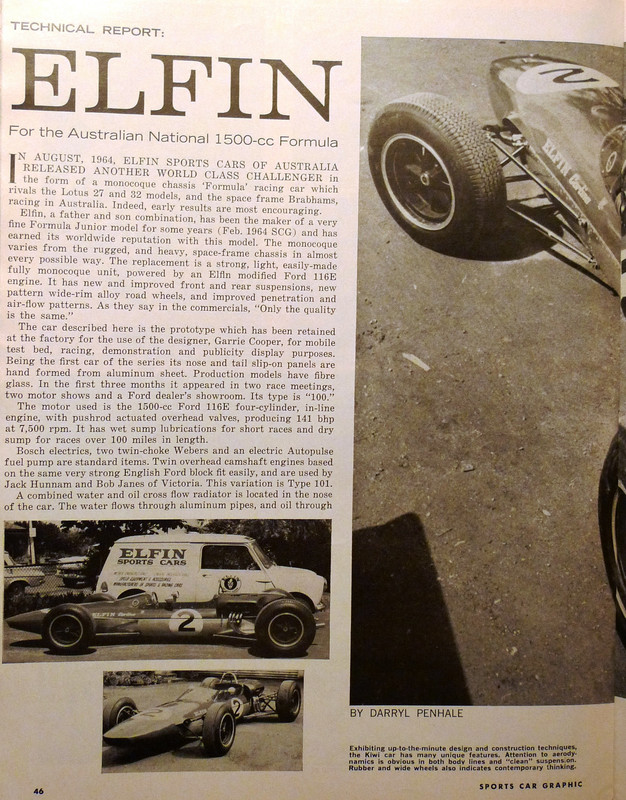 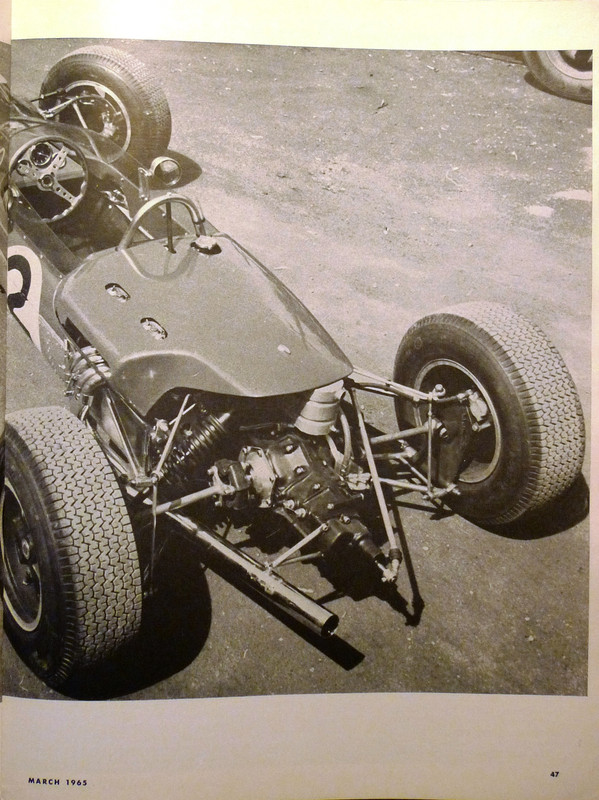 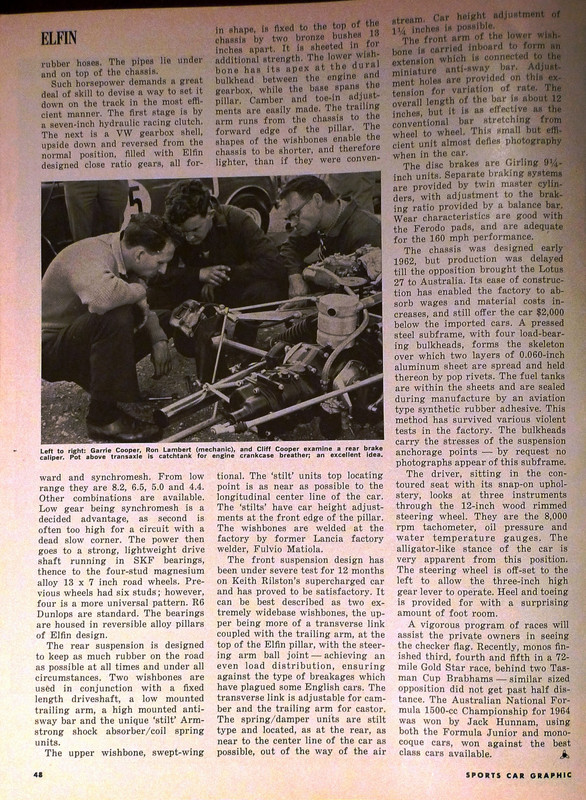 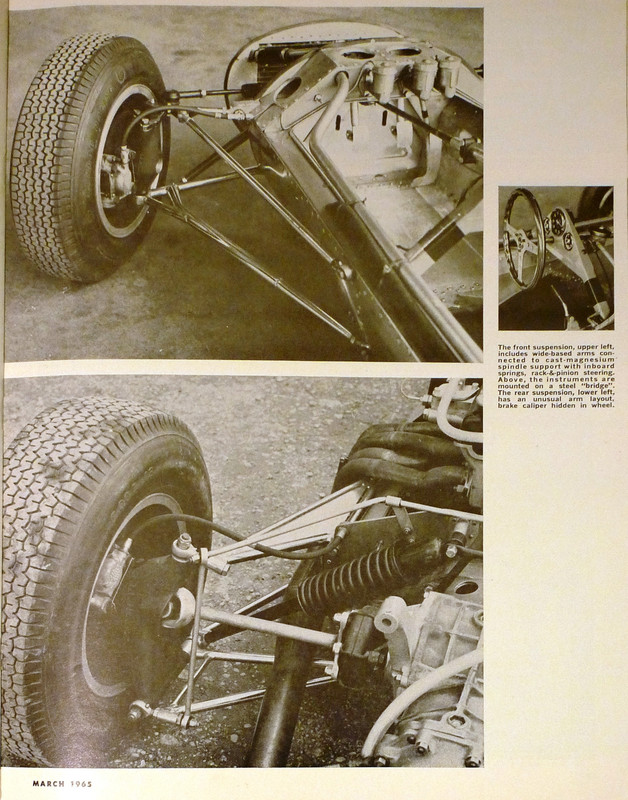 Interestingly the first two shots in the magazine show a split case VW gearbox and the last one a hewland .

Looking at the in period shots including the clisby powered car I am assuming most of the mono's came with elfin modified split case gearboxes .

Do yo have any more details on the elfin "Porsche style" clutch ? A striped photo maybe ?

As far as the clutch is concerned - I don't know whether or not they used a modified a Fichtel and Sachs dry plate clutch - I think the flywheel and clutch combo in ours (a Mk 2C - 1966 assembly) has "Germany" stamped into it - I'll have a proper look at some stage. In 68 when Dad left Elfins and they'd progressed to the Type 600 as their front line open wheeler they were still utilising a 7 1/4" diameter single dry plate clutch of "Porsche origin"..........

Yes, I reckon the majority did start off with Elfin Split boxes, I think that even the first Mk2C  had a split box initially, Garrie's first Mk 2 started life with a split box. It  would be interesting to try to nail down what they all started with!!!

It's highly likely that this engine is the same one as in the last photo in the SCG article.  The clutch would be to the same specs too. 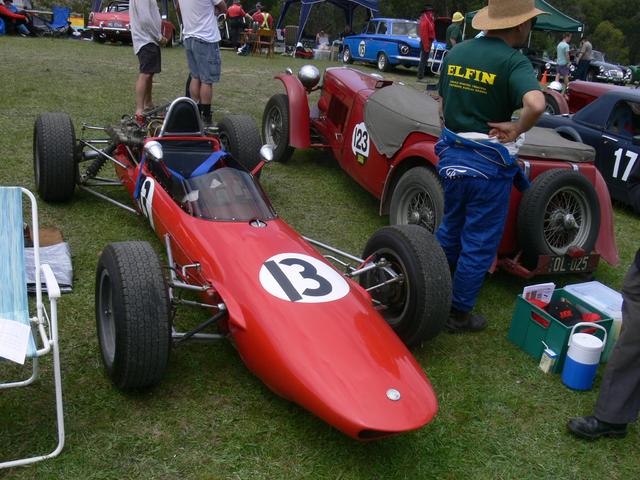 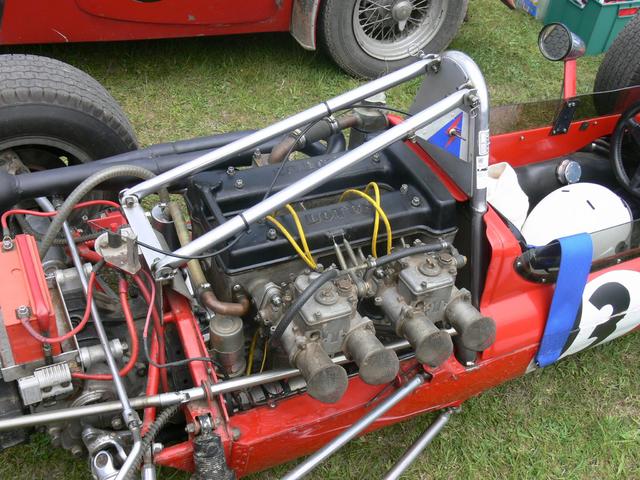 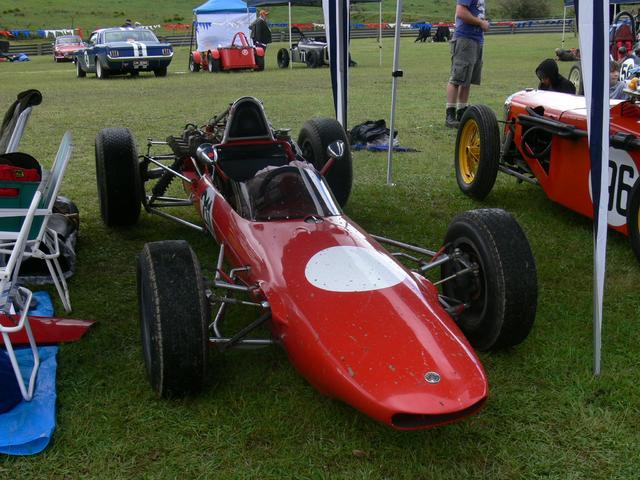 Brian Lear's Elfin register has Bill Pile with a Ford 1500, then Dean Clough, then Tony Maw fitting a Twin Cam.

Here's ours stripped back, about to get the full treatment! 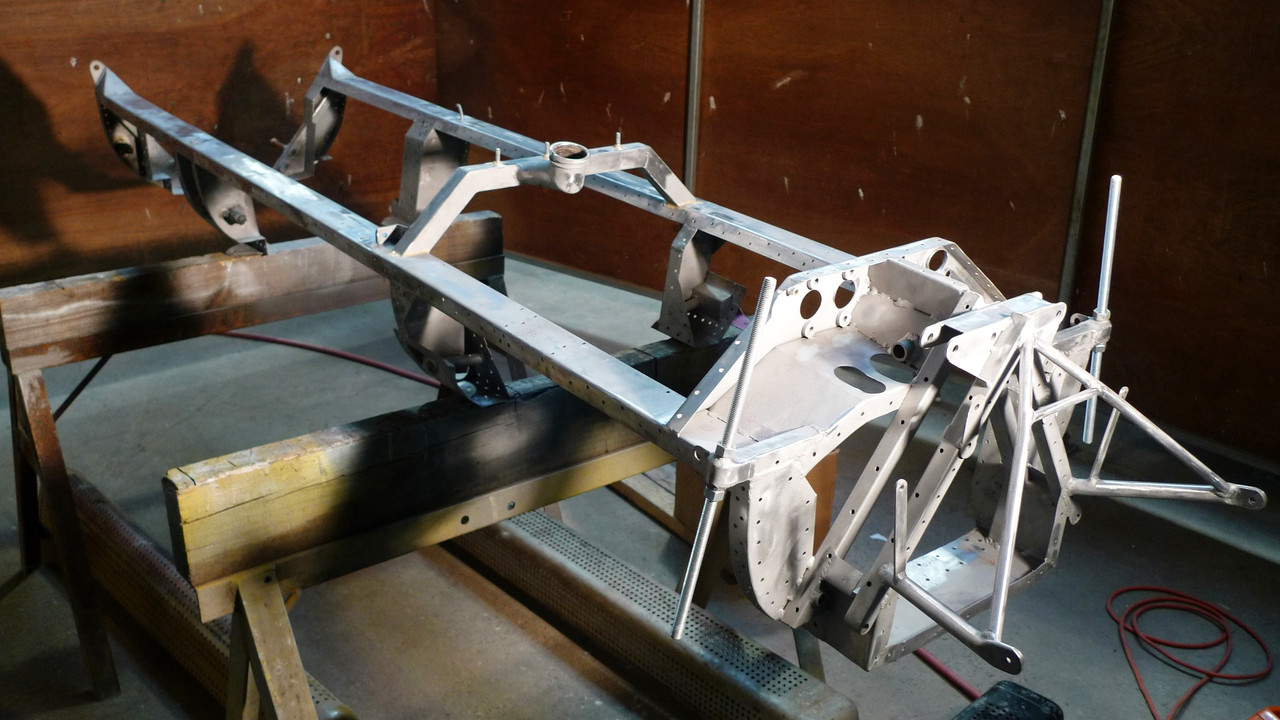 By the way, what front uprights did the original 300 run?

Ron made a new jig for it before we de-skinned it, but it went back together true enough so didn't need the jig in the end.  We've just got a couple of lengths of threaded bar through the front top pick up points so we could pick it up and roll it whilst painting it. Better seen here. 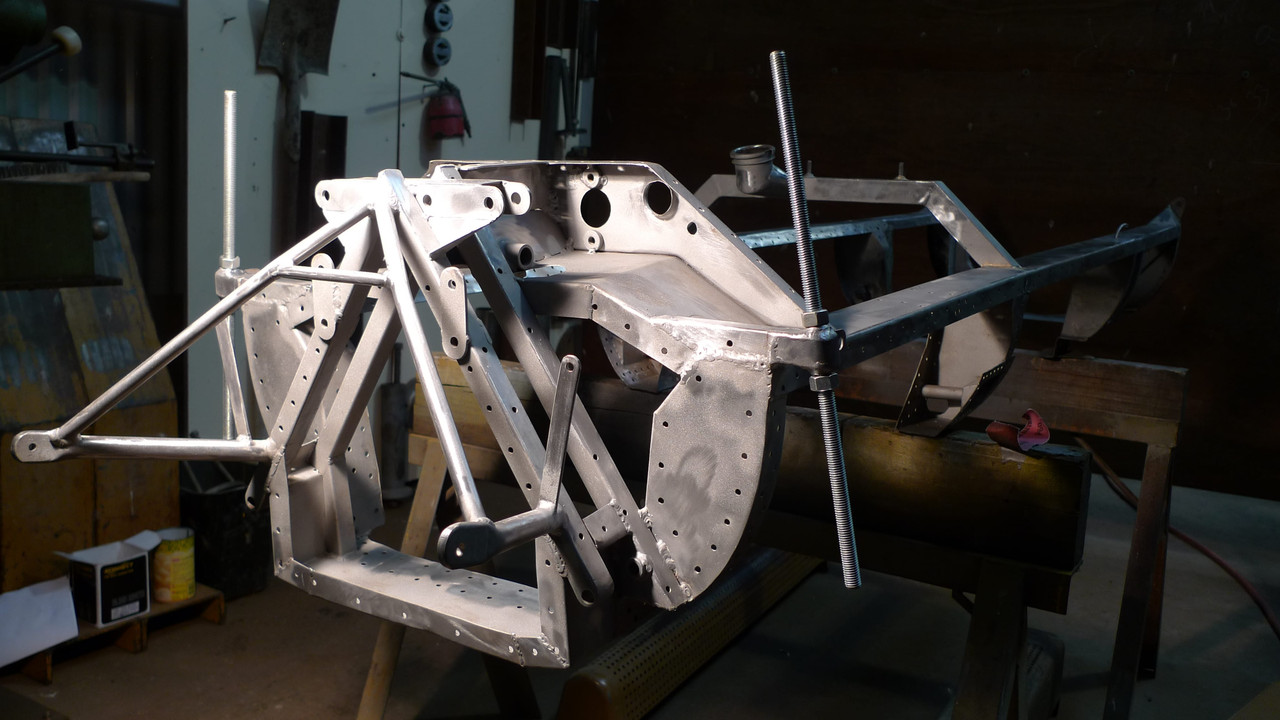 Tub getting a dummy skin assembly just so we didn't get any nasty surprises when using the "you can't get it wrong" sealant and rivets. 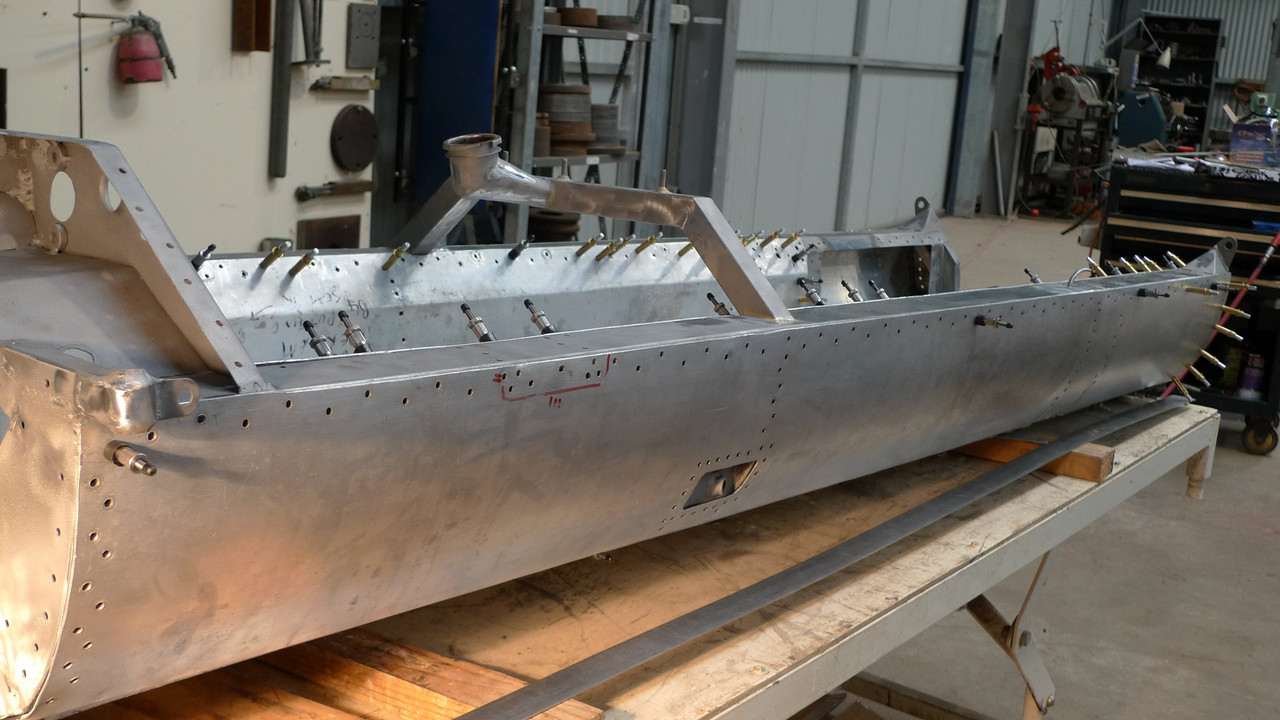