Inner sleeve, outer skin panels and seat being readied to go back in and on. 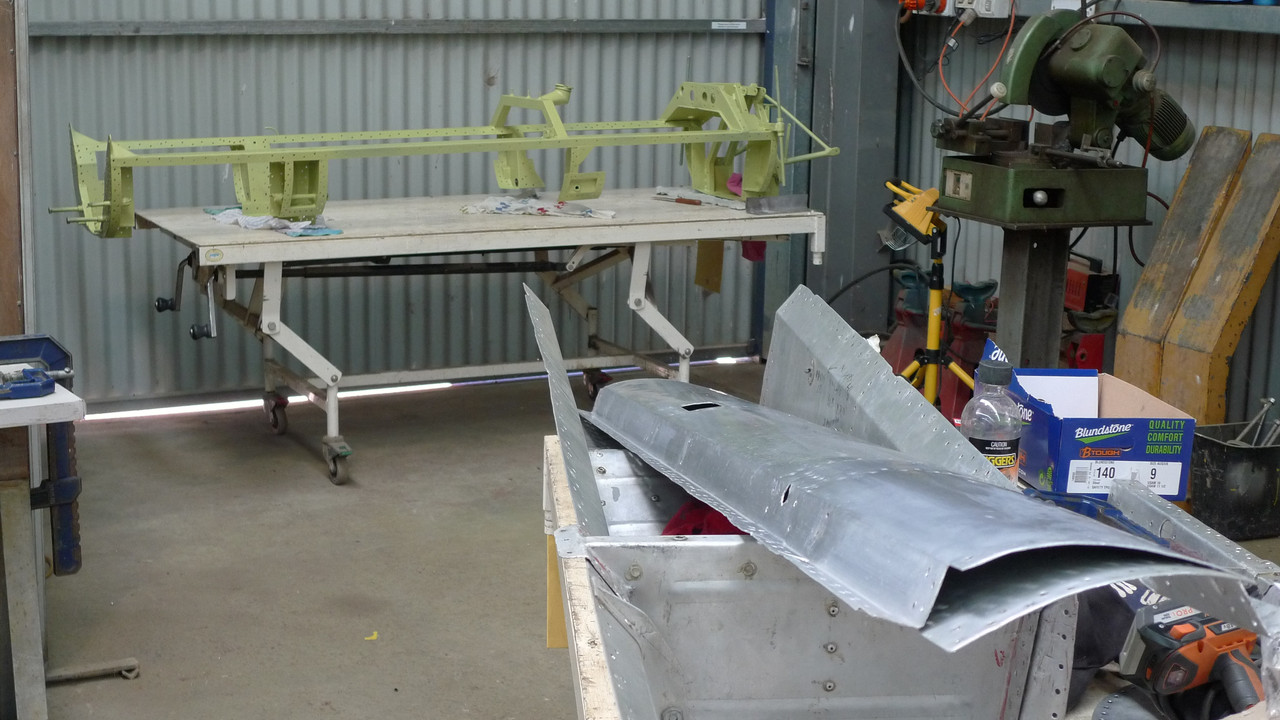 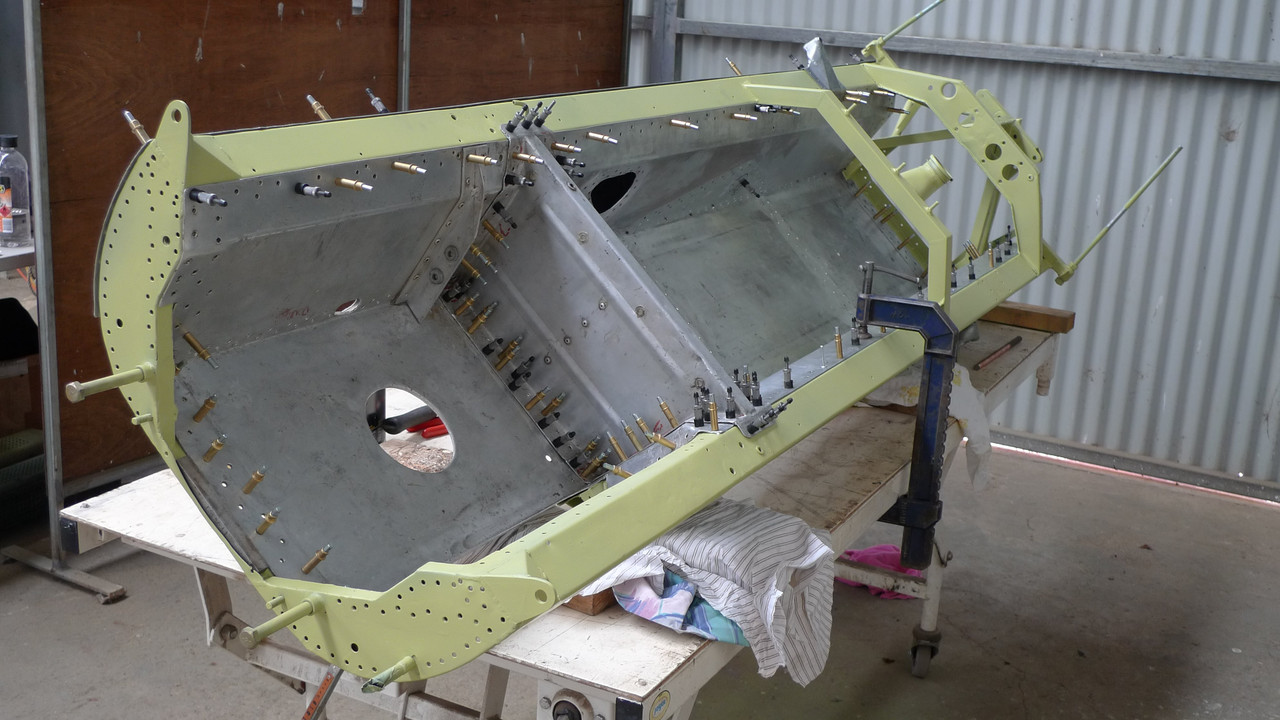 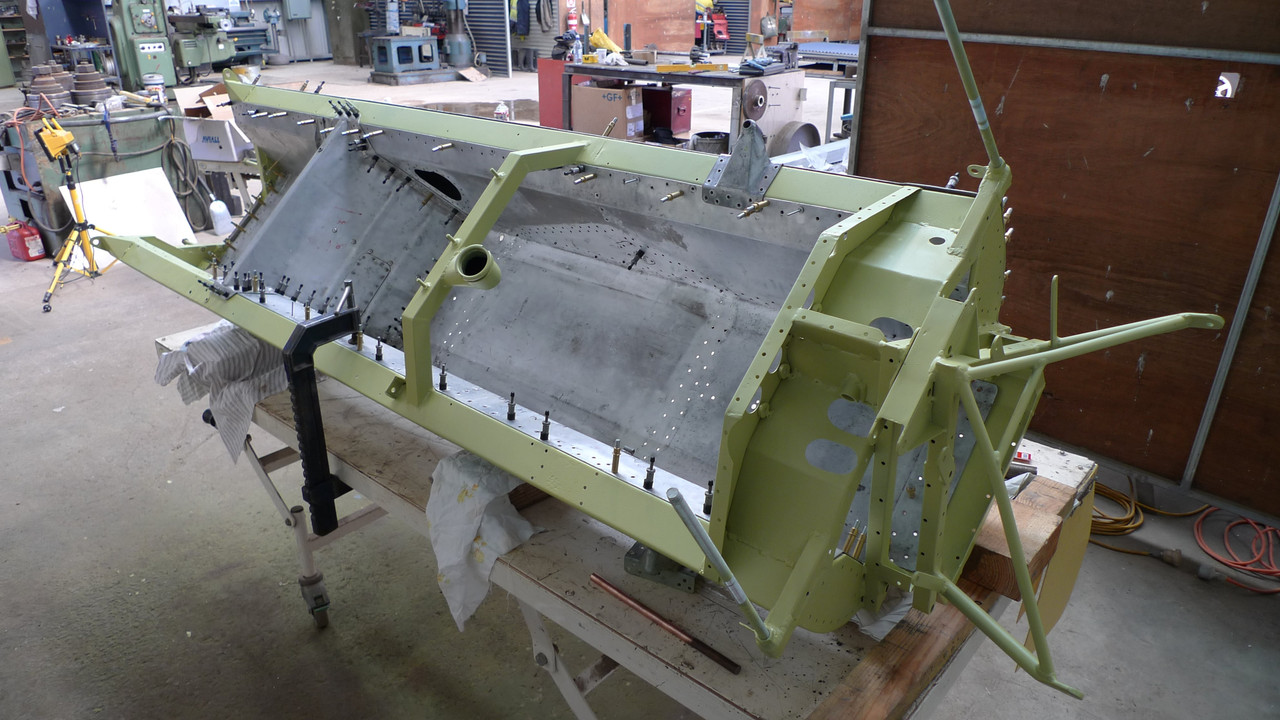 This shot gives a good feel for tub's fuel carrying capacity, the front 2/3's (it's slightly more than that), from front bulkhead to second last bulkhead holds full down each side that feed into the collector tank which is formed by inserting the seat (backrest section) into the tub. 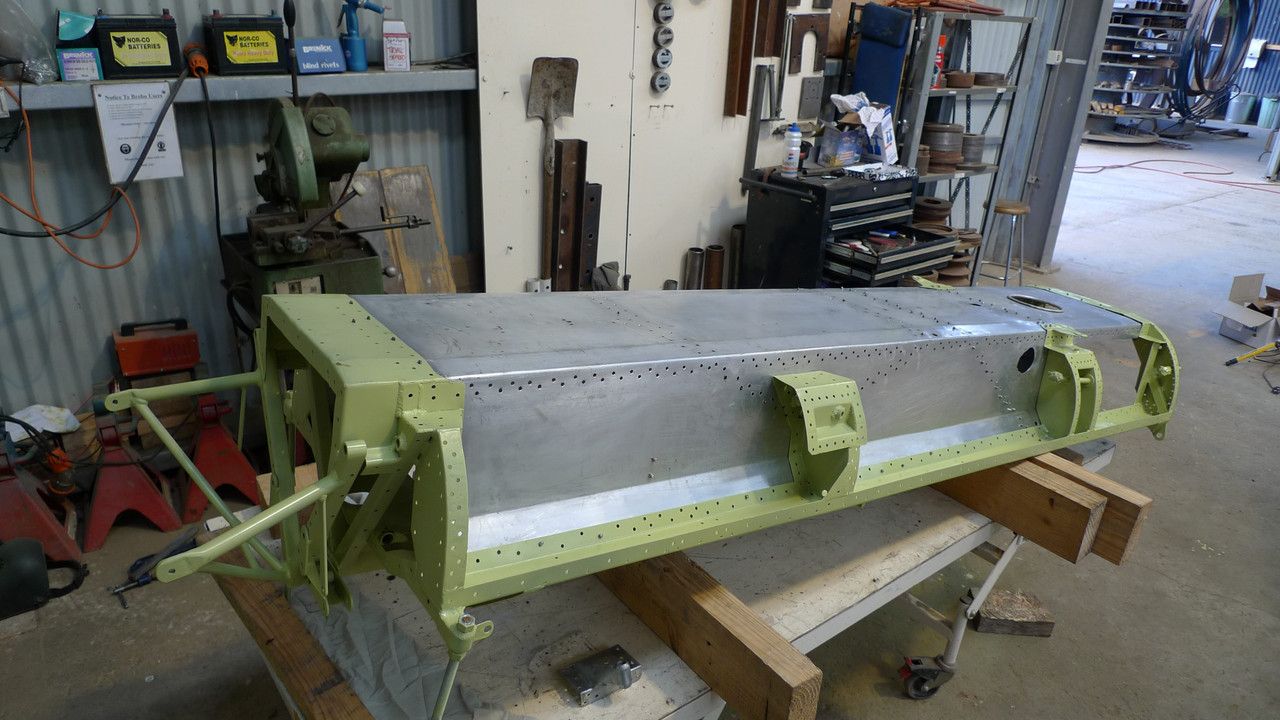 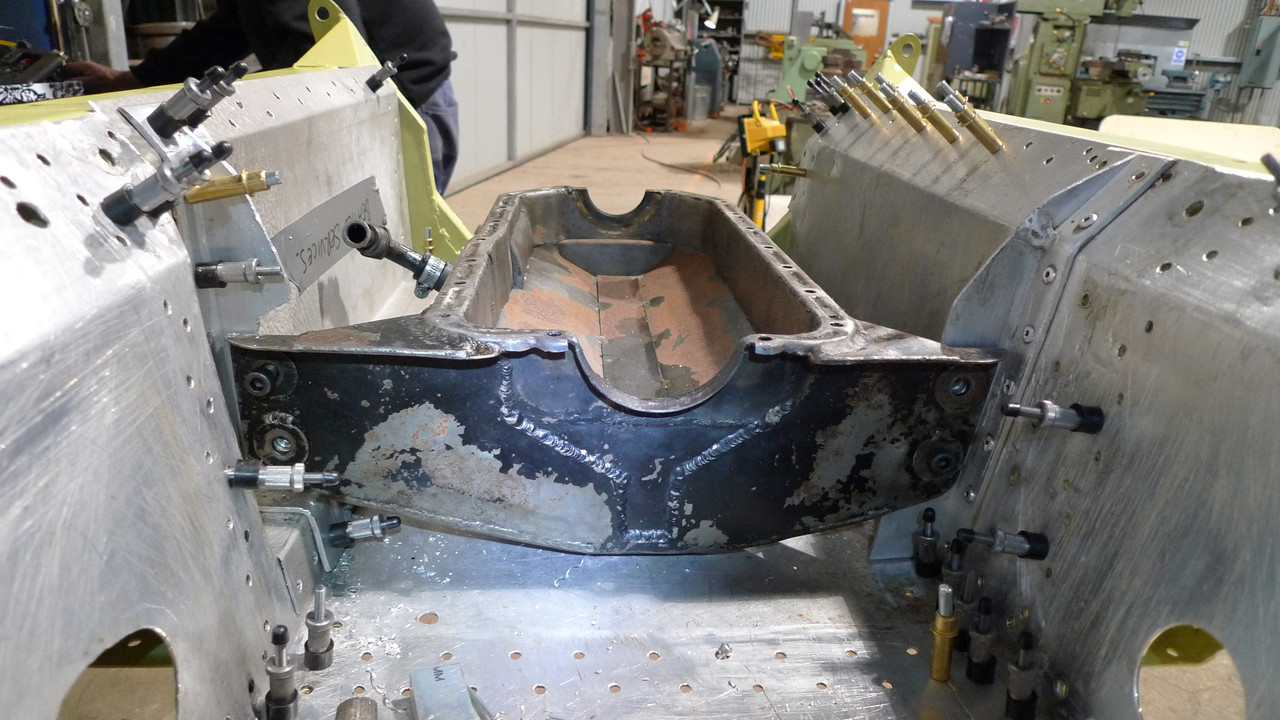 Back together again, Ron's not altogether unhappy!! 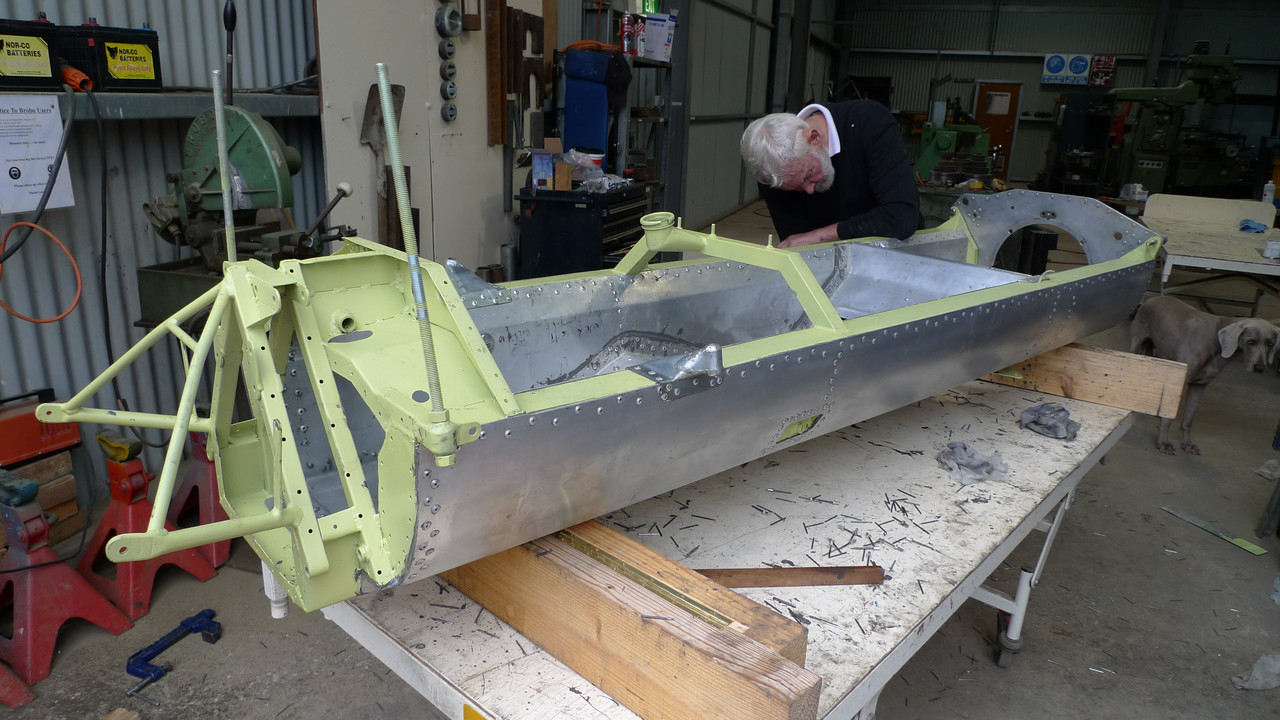 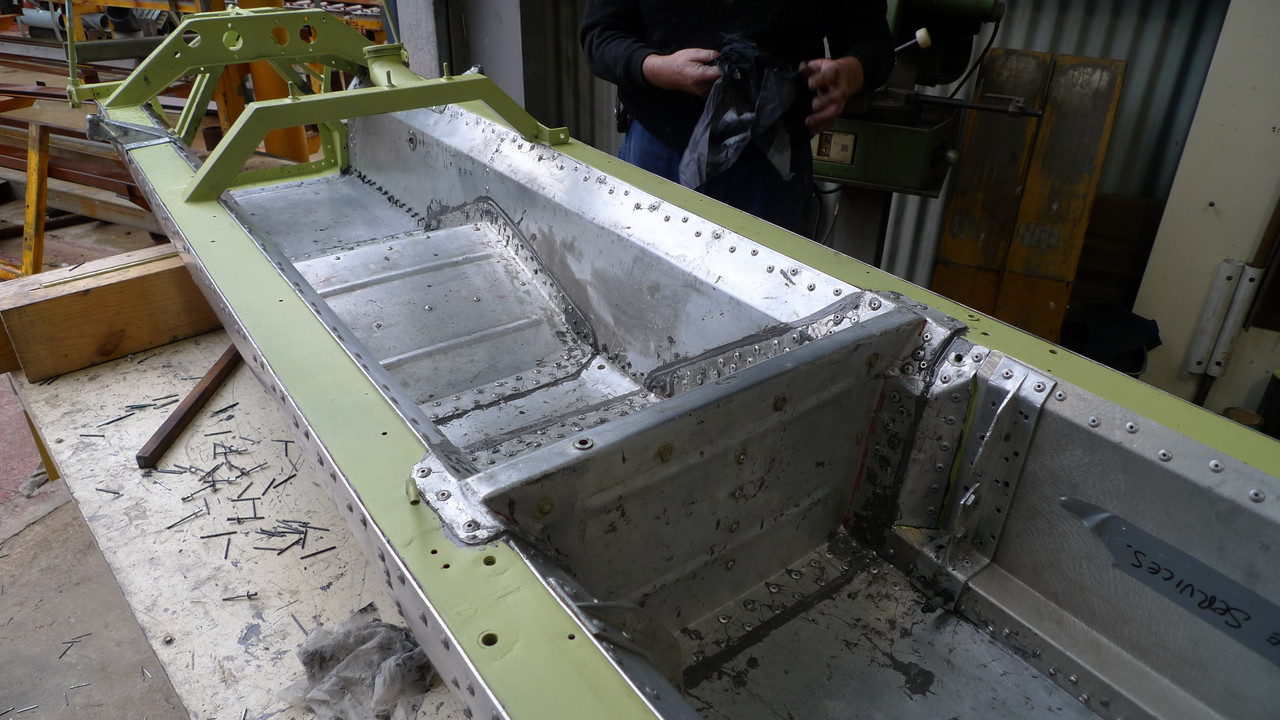 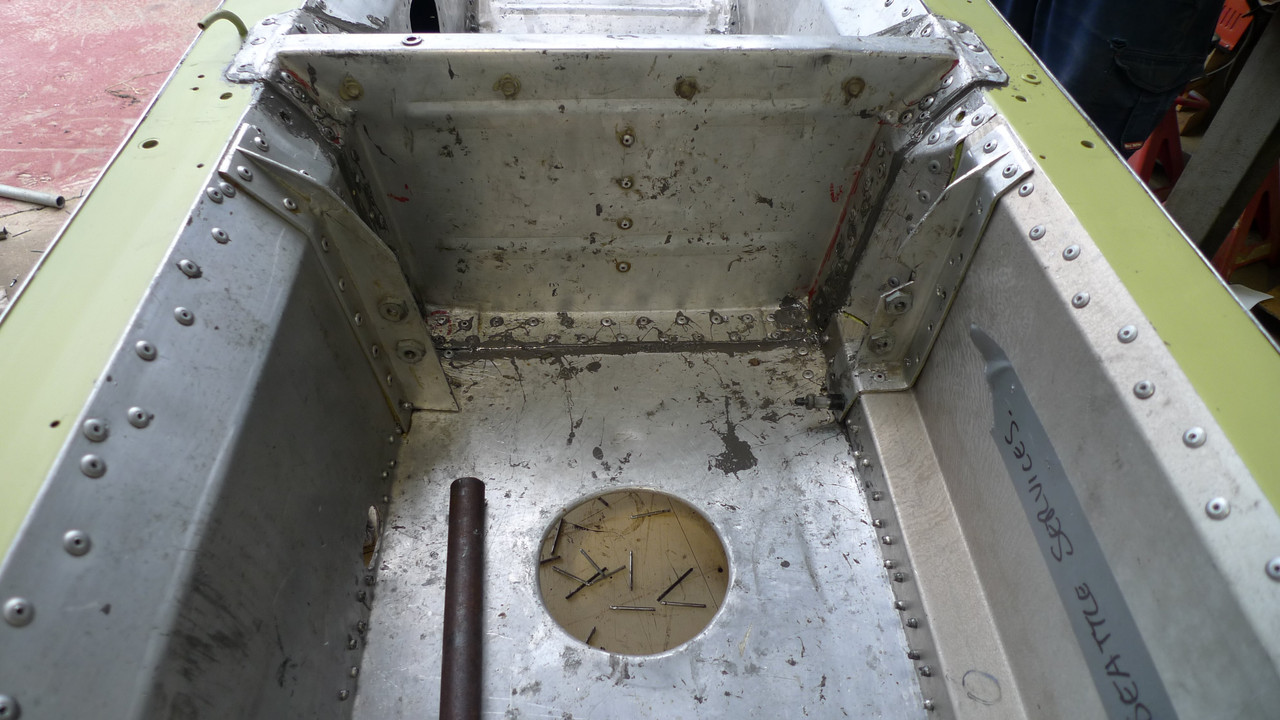 A great set of photos showing how the Mono goes together.

Just as well you found someone who knows what they're doing. Lol

Never loan your car. Granton Harrison's Mono after Bib Stillwell borrowed it for the 24/1/65 Calder meeting.

Despite the entry list stating it was a TOURING Car race, Bib did intend running a Brabham. 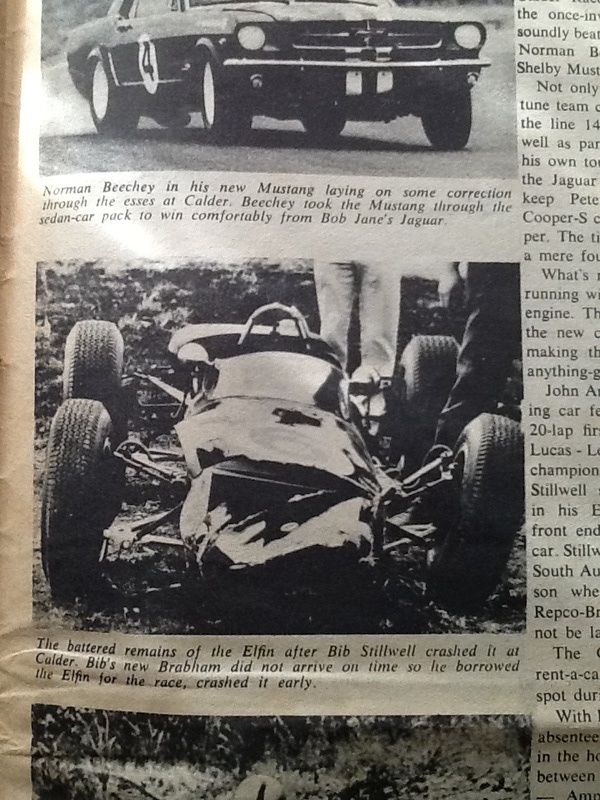 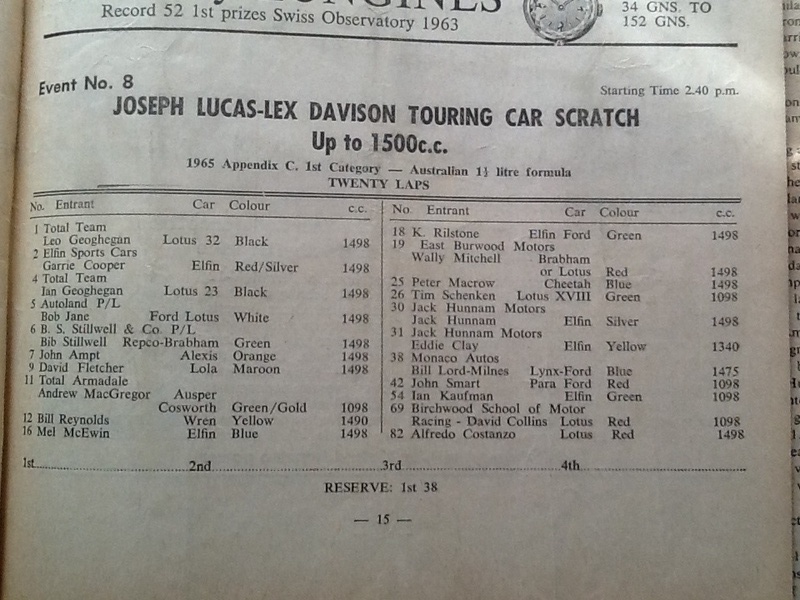 The damaged Mono photo is in the Calder report published in the first issue (29/1/65) of the short lived weekly, Australian Autonews. 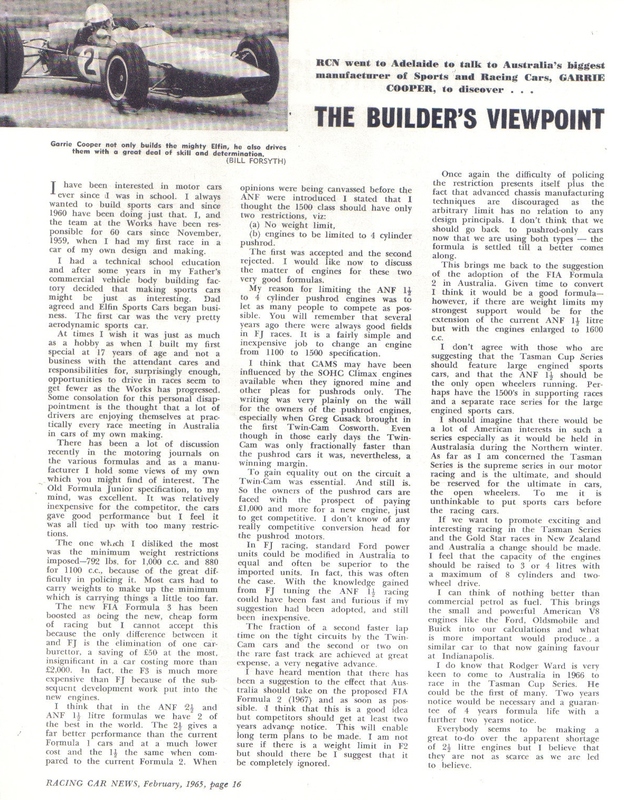 Over the three days of August 13 - 15, 1964 Lex Davison, Bill & Jim Leech and a few other Melbourne motor racing identities put together the 'Melbourne Racing Car Show' at Melbourne's Exhibition Building. With the help of other enthusiasts and their own collections they gathered together, MG's, Austin 7's, Aston Martin, Ferrari, Maserati, Lotus, Coopers and a myriad of other players to help with raising funds for Rocky Tresise's girlfriend, Robin Atherton's participation in the Miss Mercy Hospital Quest.

It was sort of 'Motorclassica' 45 years before it was thought of.

Amongst the exhibits was Jack Hunnam's Elfin Mono making its public debut a couple of week's prior to its Calder race debut. 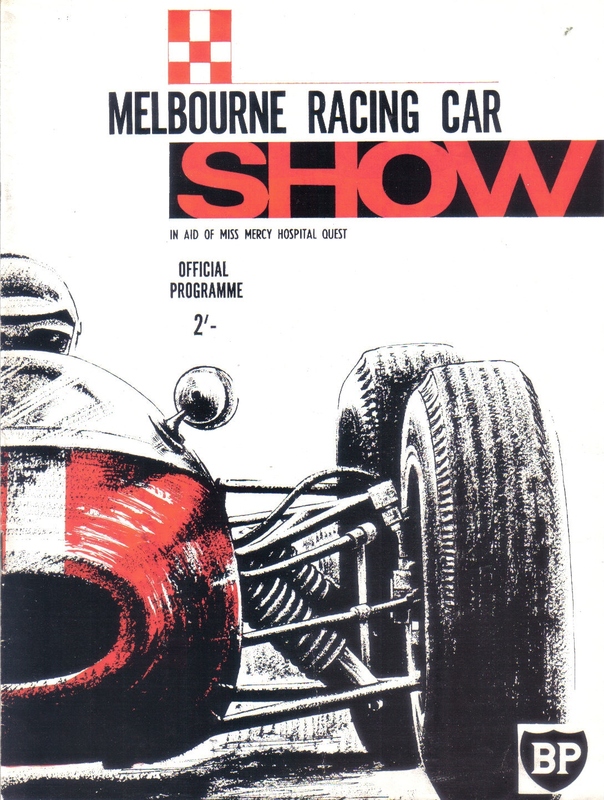 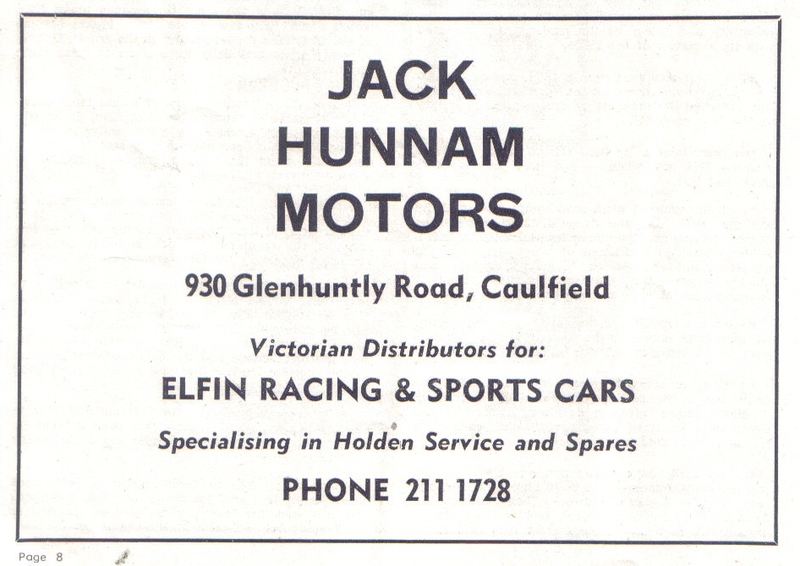 Jack's advert in the programme.

Mono exhibit info in the programme

Here's the German clutch out of our Mono, it's also stamped 2/64. 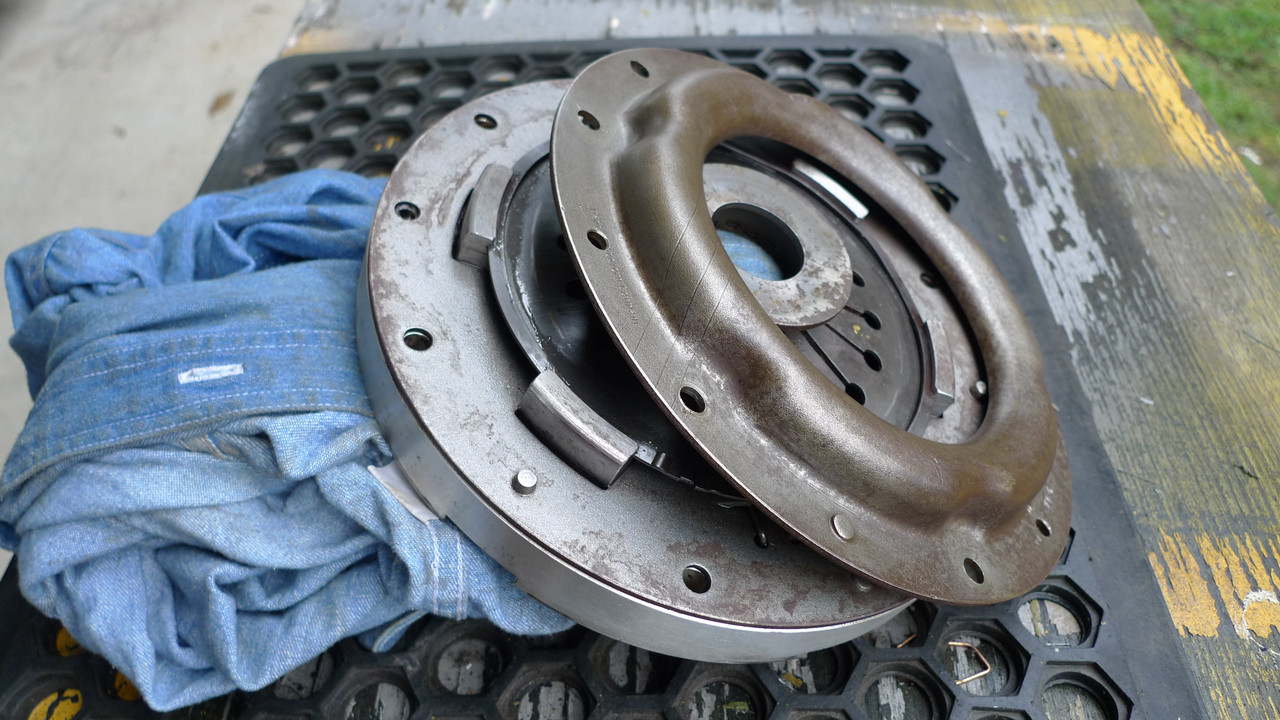 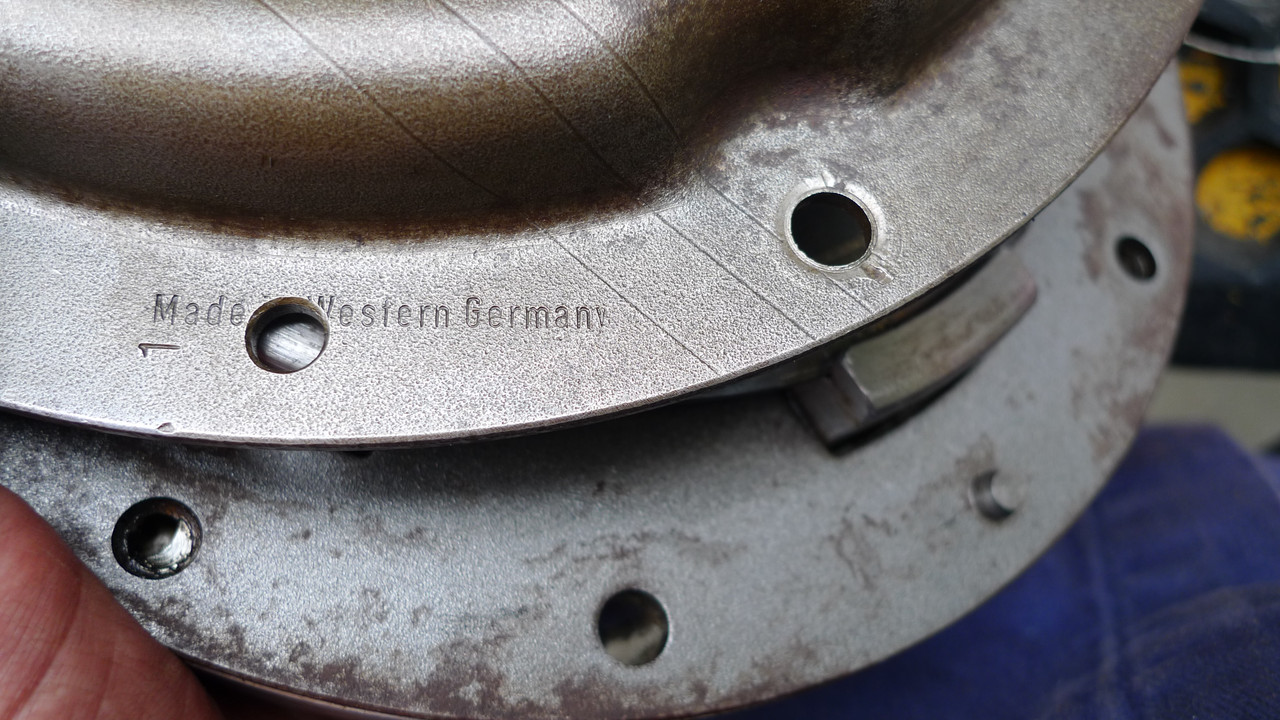 And my car, Catalina chassis number 626 owned by Vern White, had been driven by Mike Fenwick

Taking Lynton's lead the Fenwick RCN ad is identical to the AMS one. In fact this issue's classifieds is an Elfin smorgasbord with 8 up for grabs. Three being Monos, the others being Stan Keen's Twin Cam, with no price and Brian Page Mono-Lancia V4 at $3200 ono.

The Dec 67 RCN also has this ripper Col Anderson cover for Mono enthusiasts to enjoy. Depicting Alfie Contanzo in front of Garrie Cooper at November 5, 1967 Calder. 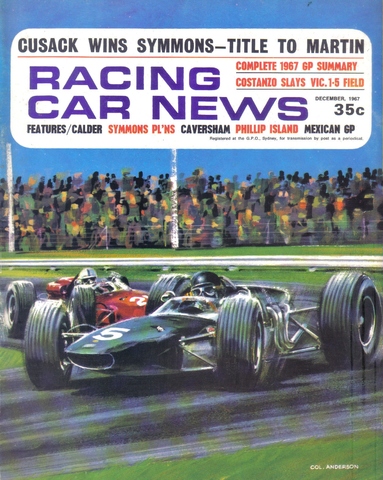 I think that's Brian Lear's car.  It may also be up for grabs as we speak, is that right Brian?

Having sat unused for almost three years, I decided to test the market and I now advise that ownership

of Mono MB6550 has passed to Sydneysider Geoffery Varey.

Let's hope Geoffrey treats 6550 in the manner to which it's become accustomed!!

If I've worked this one out correctly this is the 28/8/66 Calder meeting - the whole Division 1 Racing and Sports Car field on the back straight. 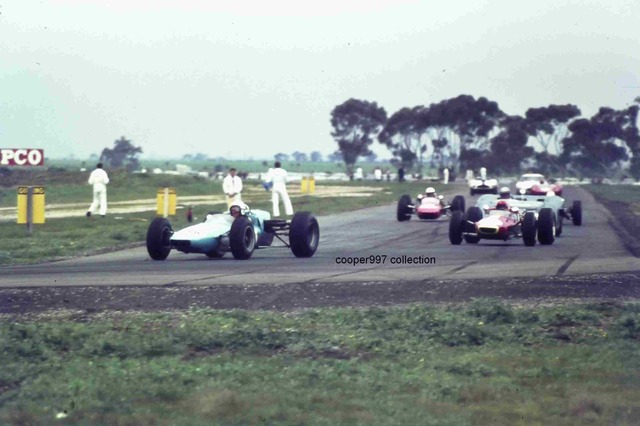 That's a great shot Stephen - do you mind if I reproduce it onto a private Facebook Group that I administer named "Elfin Monocoque Aficionados"?

Sounds like a secret handshake society James. No problem about using for the group. Thanks for asking first.

I have others, some probably need photoshop treatment. Are you any good with that?

Thanks Stephen,it's set up so that people have to ask to join keeps the spammers at bay - all TNFers are welcome to join - it's content largely mirrors this thread.

I could have a crack at any others, I have tidied up some shots along the way.

With thanks to James for making the following better than how it originally scanned.

It's Alfie Contanzo parked on the dummy grid at Sandown. As far as I can work out, it's the April 68 meeting. 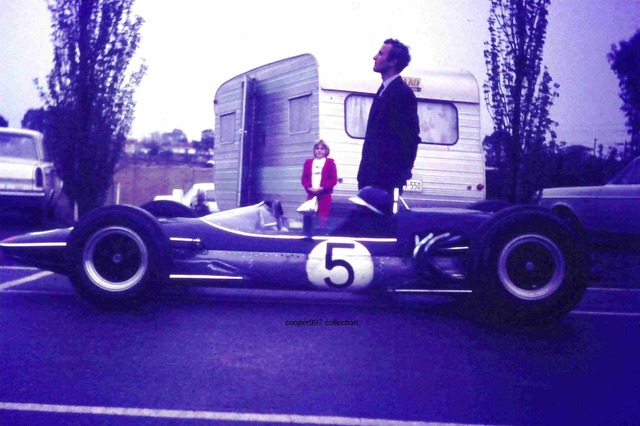 It's Alfie Contanzo parked on the dummy grid at Sandown. As far as I can work out, it's the April 68 meeting.

Thanks for the Valiant model info Mick.

Here's 2 more that James has converted to B&W. They were just a purple nightmare in colour. Closeups of Alfie in his Mono, at the same April 68 Sandown. 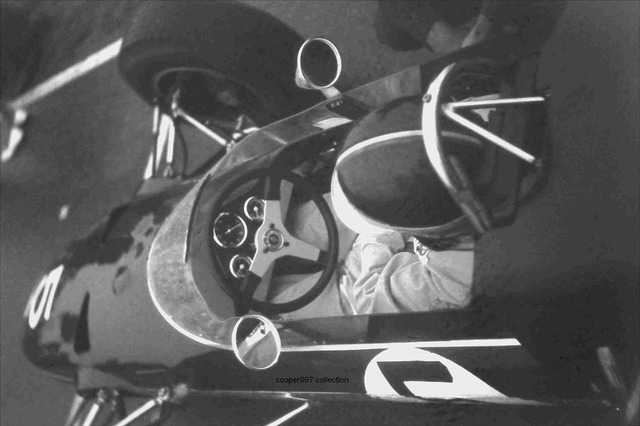 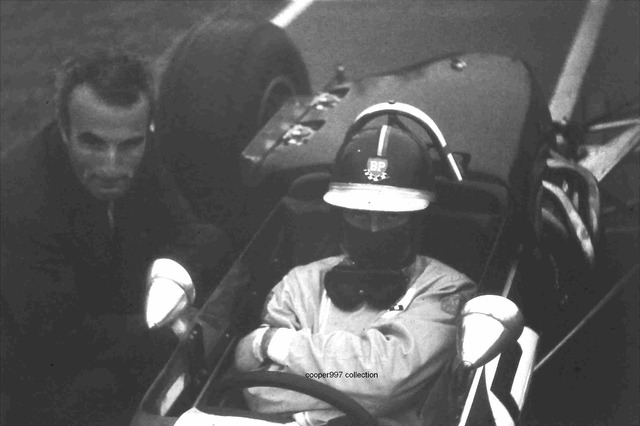 I'm about to start restoring Elfin Mono chassis number 6651 originally owned by Alan Grice. Anyone got any period photos/information on this car?

I'm about to start restoring Elfin Mono chassis number 6651 originally owned by Alan Grice. Anyone got any period photos/information on this car?
Thanks, Pete.

No I don't! But just wanted to say welcome Pete...there are many knowledgeable people here who can help you...

I'm about to start restoring Elfin Mono chassis number 6651 originally owned by Alan Grice. Anyone got any period photos/information on this car?

Just off the top of my head, it had an 1100 engine with a Howard down draft cylinder head. The colour of the car was a pale yellow (or similar) with a green stripe. But, I am happy to be corrected.

Hi Pete, I can dig up a few shots out of RCN, though designated a Mk 2, I am sure it was built on a mk1 tub with Mk 1 suspension. I'm not 100% sure about original motor, but believe it was a Holbay down drafted engine, not a Howard head (not sure if period RCN also say so) - I think the erstwhile NZ owner was of the view that it was a Holbay (orig engine long gone).

PM me, I may be able to assist with chassis, engine & even a gearbox (ie rebuilds & build up from scratch).

There's a good period shot of Allan behind the wheel on the Autopics.com.au  site - image #66611 (can't manage to post a link to it just now)  - rear suspension has already been modified from original by Grice.  Image is noted as Oran park 1966 pic is by Lance Ruting

Thanks all for the above replies and information. The really old bodywork I have with the car is indeed yellow but with 2 narrow red stripes.

The information I have is that the car was delivered in 1966 and first raced at Oran Park in July 1966. I received the car without engine, gearbox and wheels, but most other parts are there. I have a Formula Junior with several spare engines so the engine bottom end is no problem but would like to acquire a downdraught head/carbs/manifold. Also wheels if anyone has them. The tub looks quite good but will look more closely when I have it cleaned up.

We're currently casting a new set of wheels in magnesium for 6653 using original patterns - I'm sure our guy would be happy to knock out another set. Ron Lambert, who machined the originals in 66 will turn new castings to finished specs.

The stripes were indeed green...

A mid-green, not a really dark green. The yellow was a bit creamy. I have a notion there was a colour picture of the car published somewhere or other.

Thanks James, I would like to get a set of wheels if I can tap into your order. Where abouts are you located? I'm competing at Sandown this weekend if you're in the area.

Hasn't the free car freight on the Princess finished for the year?

The prices are going up!

Thanks James. I'll try to catch up with you on Saturday. I'm running a black Lotus 41 number 40. 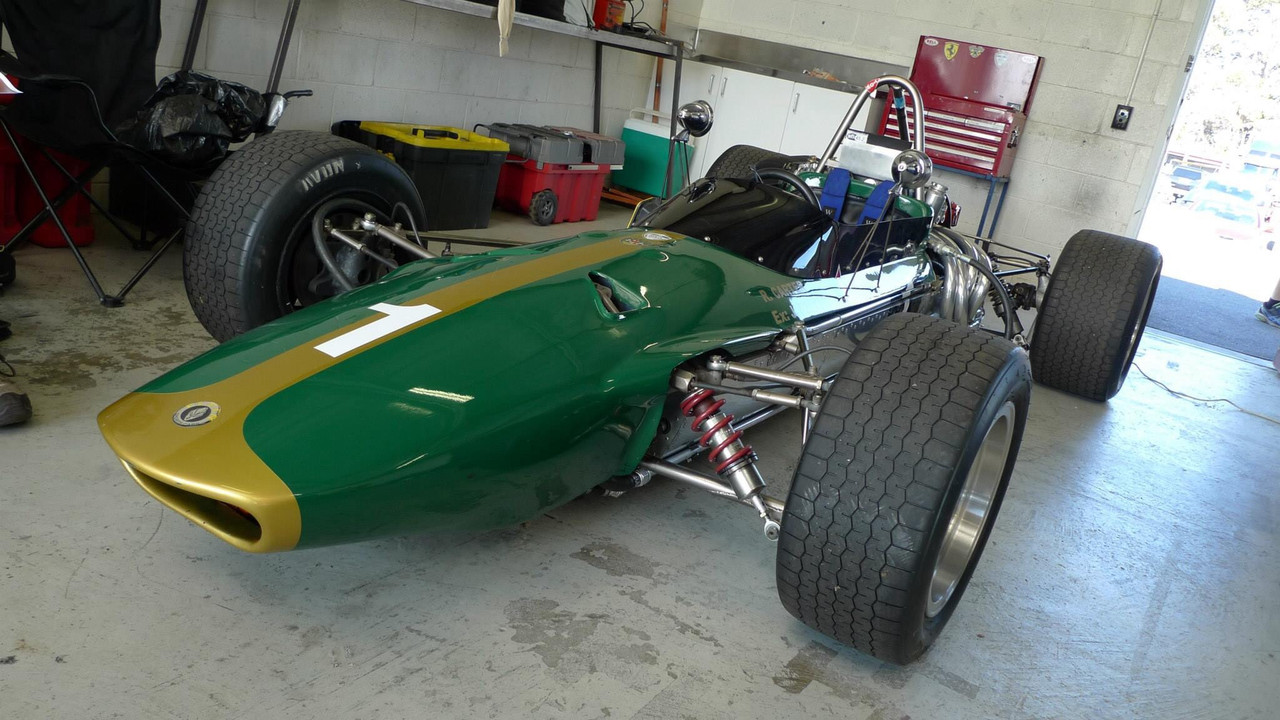 What sort of power does he have in the Mono?

I would think tyres and prevailing circuit conditions would have had a bit to do with things.

Not knocking Richards efforts at all but I would be surprised if Sandown is not a lot faster these days. Too much of the track is reprofiled. Even the flip flop to Dandenong Rd is straighter now. Dandenong Rd is a MUCH faster corner now than a decade ago. I am told that even the bumps onto the front straight have been 'ironed' into some sort of submission. At least for a few months!

I also suspect the Mono may be more forgiving over those bumps than an RT4. The one time I saw them there was quite exciting as they were skittering all over the place. Ground effects is probably a big disadvantage on bumpy tracks.

On Sunday the Mono did 1:14.5 and young Sean Whelan in a Brabham with a FVC (4 valve/fuel injection) was a fraction faster so he now has the record... 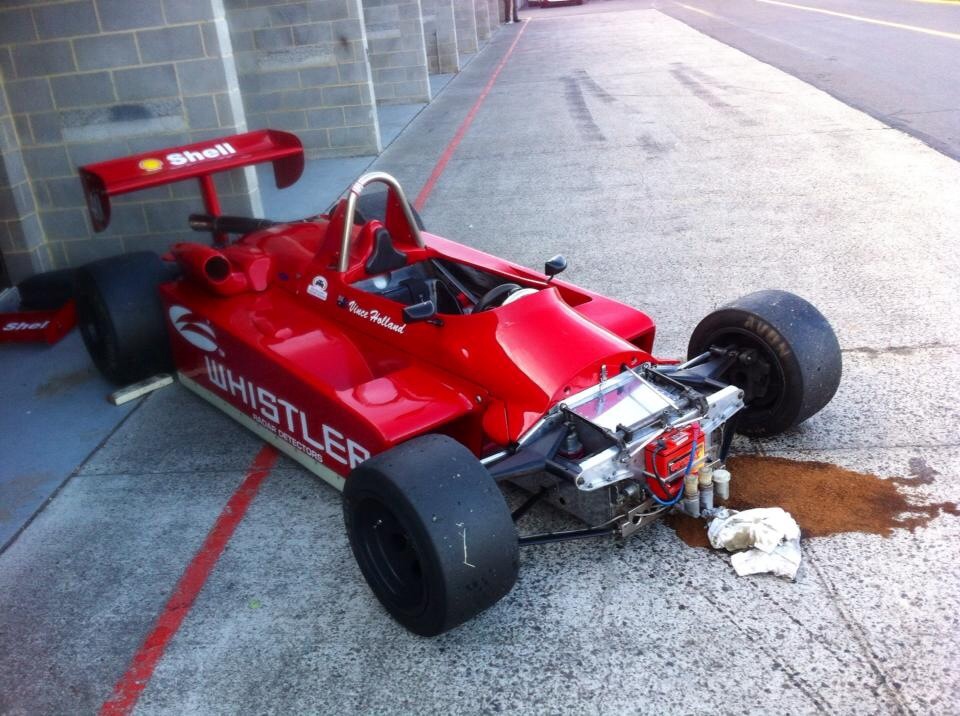 Vince Holland put in the quickest RT4 lap of the weekend in the Saturday race, a 14.97 (was a DNF after 8 laps, didn't run Sunday) - the quick O cars  &  R cars were a joy to watch through Dandenong Rd.  The owner of the Brabham that Tim Schenken demonstrated chose not to run as the track's too bumpy for him! 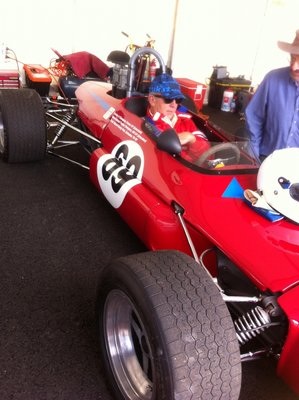 Isn't there a class distinction between Richard's Mono and the Brabham FVC?

A 1600 FVA is potentially a pukka Group O car if it's the right age & configured to Group specs.

CAMS race car groupings are purely date based so if the Brabham ran in period 1966 - 1969 with an FVA/FVC it can get a C of D for Group 'O'. The FVA was first introduced in 1966. Was a Mono ever fitted with an FVA?

Good twincams are putting out over 200 BHP these days and FVA's 40 -50 BHP more than that.

Good to catch up on Saturday, James. Sadly my Lotus 41 developed transmission problems in Friday practice so no racing for me at Sandown.

I would have thought there'd be a class distinction because of capacity, James...

In the Group O period the ANF1½ category was in place, FVAs always ran with the outright ANF1 cars.