Wondering if any one knows who built the 1953 Waye JAP that was advertised in issue 37 of Loose Fillings a couple of years ?

Other than it having a CAM logbook and it being raced @ Castle Combe by Doug Yates in 2014 there do not seem to be any other details about the car on the web.

Just glimpsed through this again and really nothing new. Most TQs then and even now use motorcycle engines.

A few midgets used JAP twins inc the Jack Brabham version that also did hillclimbs etc. That car is still alive and well and modified as it was last raced in the late 60s here at Rowley.

Some TQs also found them selves doing hillclimbs and sprints, I suspect some of the modern ones would do really well.

For 60s/ 70s TQ pics look at Lyntons excellent pics on the All British Day thread from a month or so ago on TNF.

To me [as a very casual observer] in road racing not many bike engines were used between the early 70s and early 2000s. Why? I really do not know, for a budget Formula Libre they should be fairly good.

Though for hillclimbs there has always been a good range of bike engined Libres, both old and modern.And in between!

One that is my mind is Dean Richards 750 waterbucket powered Ragno that has been very quick on hills and I feel did a few Club meets as well. His son Jay still brings it out to Collingrove.

And as I remarked several years ago the Rohrlach car that started Vincent powered and has been running at Collingrove longer than just about anything else.

Though most of the real quick stuff now is bike powered. 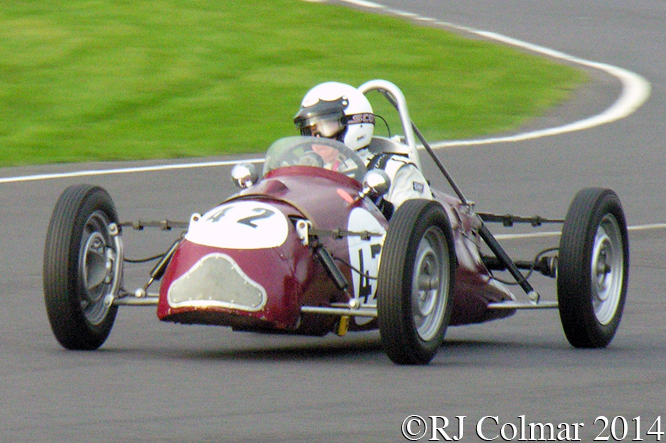 Thanks for your help Lee, here is a photo of the Waye Jap at Castle Combe with Doug Yates at the wheel.

Going through the first page of posts again I notice that in post 41 John Medley speculates if the Kevin Fuss JCW Manx Norton, mentioned by Greg Mackie in Post 28, are one and the same as the Waye.

Does this ring any bells with anyone else ?

With help from Greg Mackie and John Medley's post mentioned above, one lung on another thread on the forum, John 'Bolly Blog' Low, and Loose Fillings I managed to identify Jack Waye in Adelaide as the builder of the Waye, and that Kevin Fuss also owned it from 1955 to 1966, where and how the JCW Manx fits into the picture will have to wait until another day

I know it is not quite the same but the Aussie Racing Cars are bike powered, as was the Legends before them. I have seen some bike powered very modern Sports Cars recently too.The name escapes me ATM.
There is still several older [historic these days] bike powered open wheelers at hillclimbs.

Radical & Spire both race in the Sports car classes

What a shame all the photo,s have been lost in Cyber Space, so much work by all concerned just down the drain. 😢😤🤔

What a shame all the photo,s have been lost in Cyber Space, so much work by all concerned just down the drain.

Why not PM each of the posters who put up pics and ask them to edit them back in, Daniel?

If they upload them to Postimage they can do that easily.