This weekend at Bathurst will be 42 year since this great Gentleman Of Motor Sport lost his life.

I only knew Tom from running his cars at Huntley Hill Climb but during those years he was allways a a very strong compeditor that gave others in his class no leeway, I was running my Mazda 800 at a round of the NSW Hill Climb Championship in 1964/65 when out of the blue Tom came up to me showing intrest in my car then proceeded to teach me how to use the torque of the motor to achieve a better & faster take off from the start, in his own words "This is most vital in a small capacity car", my next run up Huntley was 0.25 seconds quicker, THANKS TOM.

Tom in his Lynx at the Tamworth hillclimb, 1966 I think. He also ran the Lotus XI at the same meeting; These were relatively low-powered cars and required some delicacy to avoid washing-off speed and time; there is just a hint of opposite-lock apparent and it's clear that he knew just how to get the best out of these cars.

Let's not forget that Tom also drove in trials, especially of the 'round Australia' variety...

I was never sure, but I was told that the Humber Super Snipe he used as a tow car for his Lotus 11 (etc) was the very car in which he ran some of these big events.

And the Mt Druitt 24 hour race

Tom's Humber tow car was indeed the car he had used in at least one round Australia trial.

He was a great mentor to many of us starting out in the sport in the early 60's and he and I became quite good mates. The friendship did not reduce his competitiveness, however, and he could be quite good at his efforts to psyche out the opposition. My Turner and Tom's Lotus eleven were quite closely matched in hill limbs and I well recall the day at Huntley hill when he walked up and spoke to me as I lined up on the starting pad saying simply 'there's oil up there son'. We had been battling all day for sports car FTD and that simple statement destroyed any chance that my final run would beat him! Without any chance to confirm or deny the suggestion of an oil spill I could not avoid lifting off just enough to ruin the run!

Tom loved driving at Bathurst and, in his later years, it was the one circuit meeting he never missed. He generously spent a lot of tiime showing me the line around the circuit on my first run there in Easter 1968. I was not there the day he died and was shattered when hearing a radio report of his death but it is at least appropriate that in death he became a part of the history of a place he loved so much.

Could some one put together a list of the cars that Tom drove over the years let alone designed.

Thanks Dick, what is the History of the 2 Lotus 11 & did he have them both at the same time. 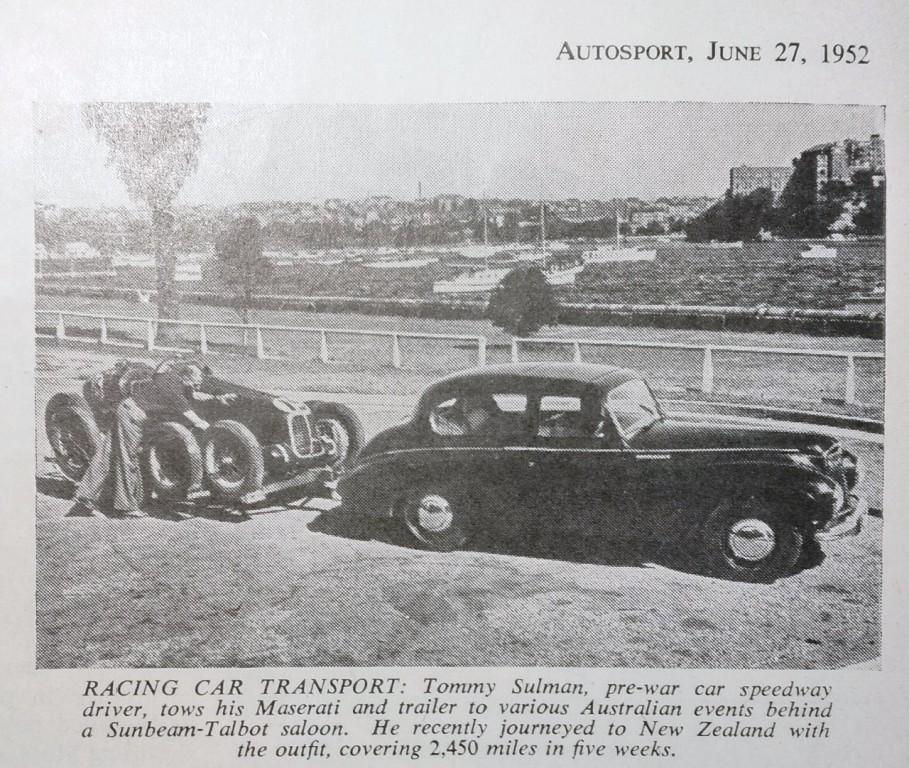 Without double checking, the Sunbeam Talbot shown above may be a 'racing' car too. Fluffing around in my Gnoo Blas file I've found this entry...

I was also reminded of the David Kelsey Flickr collection that I've previously identified on TNF, but worth another view. Hopefully this link takes you straight to Tom's 99 Aston DB3S and the Sulman-entered Sach 15 humpy Holden in the background at the Feb 60 Gnoo Blas ATCC meeting.

Originally posted by the late Daniel Tracey
Thanks Dick, what is the History of the 2 Lotus 11 & did he have them both at the same time.

Too late for Daniel, however...

The ex-Whatmore car, built up by John Coombes and and raced by Roy Salvadori and Ron Flockhart in England, was originally chassis No. 305 and rebuilt with replacement chassis 553, Tom owned it from 1963 to 1967 and raced it alongside his other car, chassis No. 343. But not as often.

This was then sold on to Malcolm Bailey of Newcastle, then was restored in the ownership of Adrien Schagen, moving on to his close friend Fred Vogel and later to Paul Samuels. By this time it had a new body from Williams & Pritchard due to an accident in Fred's ownership. Warwick Marks was the next owner, only racing it five times before selling it to George Razdowski who moved it to Europe.

Michael Clark was the first owner of No. 343 and it was driven by Peter Arundell in his ownership. Henry Nehrybecki imported it to Australia and only raced it once before selling it to Keith Whightley (who only raced it three times) in 1960. Johnny Martin owned it but never raced it, then it went to fellow car-dealer Ron Hodgson. A GT top was put on it for some races, but Tom then bought it and that went by the board.

It was entered for 103 events before Tom was killed in it in 1970, many of those being hillclimbs.

Once again Adrien Schagen bought the pieces, a new chassis was built by Bob Britton and another Williams & Pritchard body was fitted, it also was sold to Paul Samuels. Later owned by Richard Longes, it travelled to Europe, then went back to Samuels before Gerry Lawson bought it.

All details from Marc Schagen's book, which covers the cars' histories up to 2012.

This article is about Tom generally rather than the Lotus 11s specifically, but there are some pics of the cars; 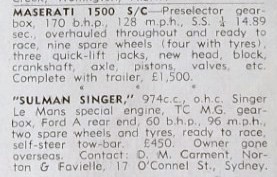 As they write up an unregistered trailer ticket for you...

From the pages of the 1952 Australian Motor Racing annual. Tom Sulman's Maserati shown when still owned by David Chambers at the March 1950 Rob Roy. 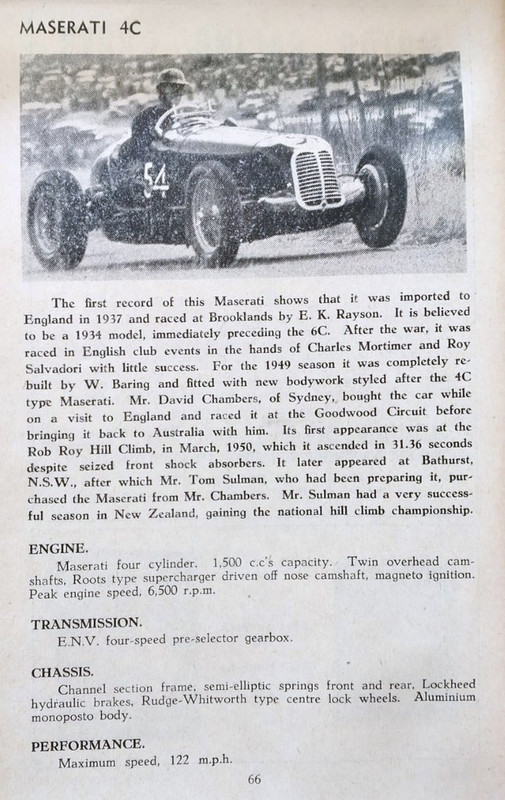 Just as an aside, British Jaguar dealer and lifelong racer John 'Noddy' Coombs's surname had no 'e'.