One of my personal heroes is gone. Godspeed Jerry!

Years ago I read a great story about Grant. In the early 60's he was drafted into the Army. As a new recruit, he was stationed at Ford Ord. As you may know, Laguna Seca was on Fort Ord property in those days, and the track was run by the Army. He was given a weekend pass the weekend of the big sports car race. He won the race (Lotus 19 ?). Monday morning, he and his platoon were assigned trash cleanup at the track. RIP Jerry.

I'll always remember his great race at Indianapolis in 1972. I was so happy for Donohue and Penske in the end, but after Bettenhausen broke, it looked for awhile like it was Jerry's race. He would have been a very popular and deserving winner.

Condolences to his family and friends, and thanks for the memories. 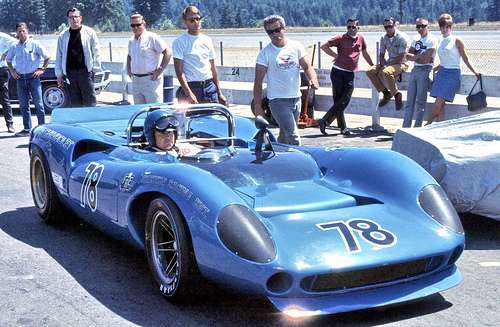 A very good guy and a great ambassador to motor racing. 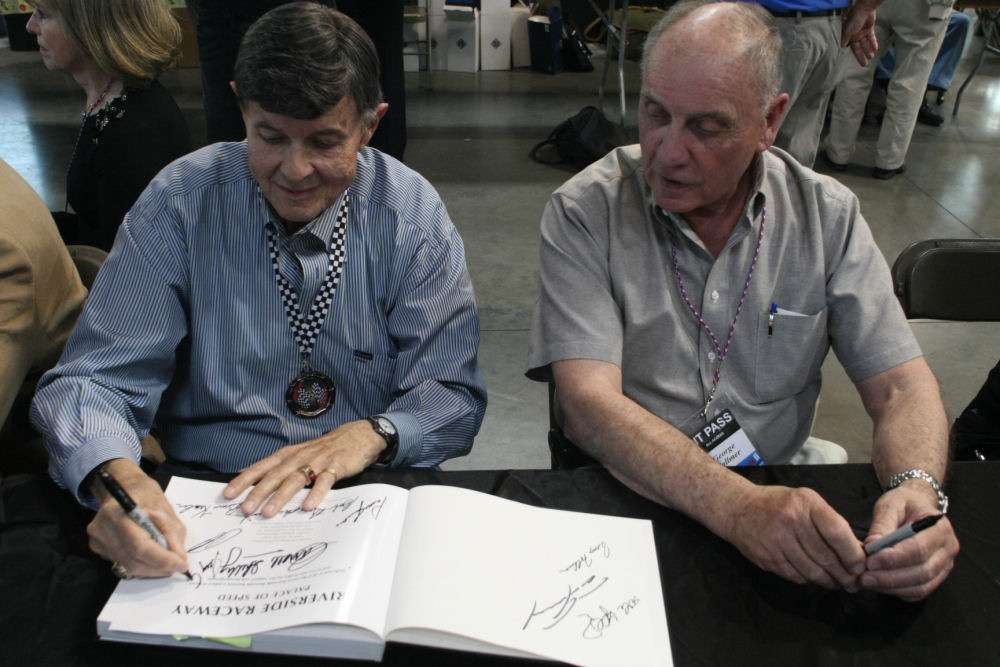 Always liked Jerry. Class act. All around good guy, and he could haul ass in just about anything he strapped on...
RIP...

RIP Jerry, a very underrated driver I felt. The first to lap 200mph average though, is his forever and can never be taken away from him. 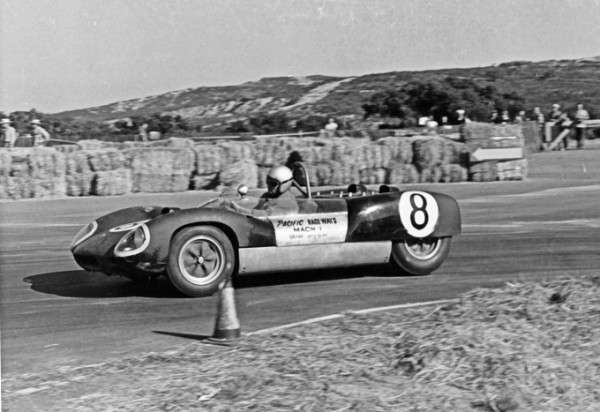 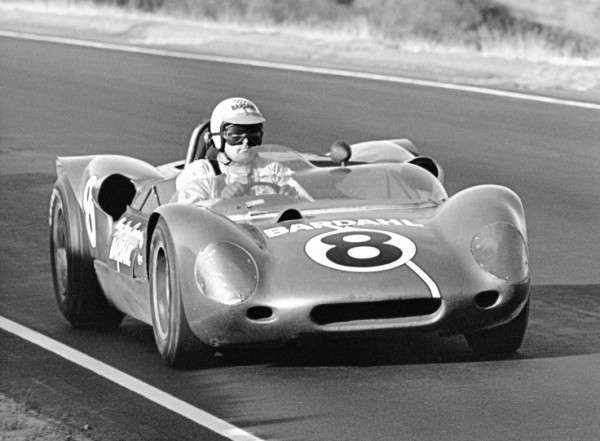 Jerry Grant in the same Lotus 19 two years later, now with Chevy power. He had to mortgage his house to buy the car. Photo taken during the 1964 Pacific GP at Laguna Seca.

A great and interesting career during a golden age in racing. A good subject for a bio book?

I was a fan of the man just because of your names RIP Jerry GRANT.

Sometimes I feel so sad that there is so much focus on the winners of the Indy 500 formeost and sometimes almost exclusively.
Because other milestone achievements in champcar racing are overlooked, almost forgotten and deemed of little importance compared with winning Indy. 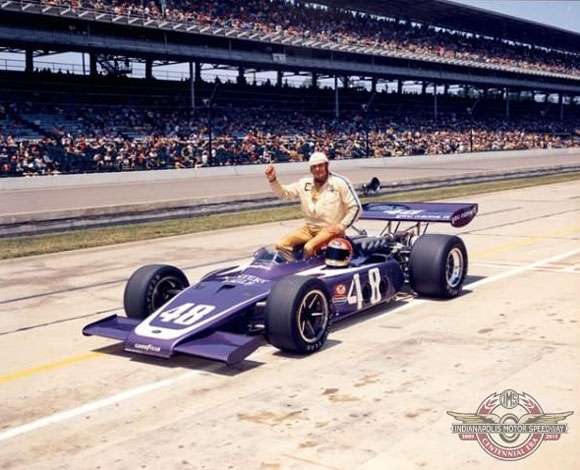 Jerry Grant in his Eagle at Indy

This is what the Speedway has to say about Jerry Grant:

Grant, a prominent American road racer, turned his historic 201.414-mph lap in 1972 at Ontario, Calif. But he is probably best remembered for nearly winning the 1972 Indianapolis 500.

Driving the purple Mystery Eagle as teammate to Bobby Unser on Dan Gurney's All-American Racers team, Grant led at the 188-lap mark when he had to pit to replace a tire which was losing air. Instead of pitting in his stall, he went to the adjoining one of Unser, who had retired much earlier in the day. Whether or not Grant actually took on any fuel from Unser's refueling tank is up for discussion, but the hoses were momentarily hooked up, and it became known that the tank in his own pit was apparently empty, the maximum allotment of 275 gallons having been exhausted.

While Grant did finish the 500 miles, taking the checkered flag in second place behind Mark Donohue, officials subsequently disallowed Grant's final 12 laps, thus dropping him from second to 12th.

Such an occurrence was hardly a new experience for Grant. With only five minutes remaining in the 1966 Sebring 12 Hours, the Ford GT Mk. II he shared with Gurney was in front when a mechanical issue forced Gurney to stop on the course. Gurney then proceeded to push the stricken car the final 300 yards to the finish line, whereupon he was disqualified.

Gurney and Grant would have placed second, based on distance covered, if the car remained untouched at the side of the road. Less than three months later, Gurney and Grant were seemingly on their way to winning the 24 Hours of Le Mans when a mechanical issue eliminated them while leading at the 21-hour mark.

Goodbye to one of the good guys. My favourite recollection of Jerry Grant was reading in (I think) Sports Car Graphic back in the 60s that at one race he decided that his trusty Lotus 19 Chevy needed a tail spoiler. Not having any sheet aluminium with him, he knocked one up from a metal advertising sign - which just happened to be for Bardahl, his sponsor!

Sad news indeed. He was a real gent and was happy to be interviewed by me regarding his involvement with Dan Gurney and the AAE team last year. Rest in peace.

As a great fan of Jerry’s this image was very memorable to me as well.
RIP Jerry, you will be missed by many.

This picture and information was provided to me by JB Miltonian a few years back:
From Sports Car Graphic's report on the 1965 Pacific Grand Prix at Kent, Wa. USA (text and photo credits to Pete Biro):

"...during a Thursday practice run, the body blew off the Lotus, shattering sponsor Alan Green's nerves as well as the expensive new fiberglass body he had just purchased from Dan Gurney - and had painted pearlescent, yet. Then, after an all-night patching session, the car fell off the trailer on the way to the track Saturday morning. If this wasn't enough, new big tires wouldn't fit under the front fenders, so tin snips now did even more damage to Green's nerves. Finally a cobbled up Mobil sign, being used as a spoiler, fell off the car at speed. This was cured by switching to a more reliable Bardahl sign (sponsor plug). So with no bodywork over the front tires, plus a few other minor details, you can see why it was impractical at this time for the tech inspection chief to give Jerry the go-ahead."

A few years ago at the Legends of Riverside, Chuck Parson's daughter, Linda Peterson asked me if Jerry Grant was there. I told her he was. She told me in his younger days he had been hurt at Monterey and Chuck Parsons had him come and stay at his house to heal after he got out of the hospital. Linda took care of Jerry until he was well. She was very young,

I went up to Jerry Grant and asked if he remembered staying at Chuck Parsons house until he got better. He said he did and Chuck's daughter Linda had nursed him back to health. I told him she was at this event with her husband George Peterson and would love to see him. Jerry came over and sat with Linda and told her how much he had looked forward to her coming home from school and taking care of him and that he had always thought about how cute she was being his nurse. She was like Shirley Temple.

Very few American drivers in history have been able to compete in the tough 72-kilometer Madonie Piccolo circuit. Jerry Grant was one of them, managing to finish 8th in the 1964 Targa Florio at his debut, with the most "European" of the American racers Dan Gurney as co-driver. And compared to the 904GTS, Alfa Romeo TZ/1 and GTO which finished before them, the Cobra was a much more crude thing to drive.

Jerry Grant was a racer's racer. I always thought he was underrated and underappreciated, not by the fans, but by the racing press.

I regret that I never met the man but I am fortunate that I was able to see him drive, if only a few times.

Deepest condolences to his family.

Shairon and I sat with Alan Bolte at the Shelby Event at Pomona a few months ago. He was one the highlights of the panel discussion along with Sherry McDonald, Dave's widow. I had never seen him speak before and he was very entertaining. He had a great wit and he got more than a few laughs from the audience.

He looked very weak from his battle with cancer; but he was tough guy with great determination; so he he had to be there.

I don't know what else to say; but God Bless his soul; and my deepest wishes to his family.

During the panel discussion Bob Bondurant made a comment about being fastest in the GT-40 at Le-Mans setting a new top speed. Well Jerry sat up a little straighter
and explained in detail how he begged to differ. He HAD been the fastest. They're back and forth left BB reaching for words of rebuttal. For me it was the highlight of the panel discussion.

There will be a celebration of Jerry Grant's life at the Riverside International Automobile Museum, Sunday October 28th. There will soon be an announcement from the RIAM .

At this time, Butch Wilson, the sole surviving crew of the "4 Musketeers" who worked on both Jerry Grant's and Bobby Unser's Eagles in the great years between 1972 and 1975, is at the RIAM, refining the shifting on an Weismann gearbox fitted to one of those Eagles, and has great stories to tell about Jerry.

Butch is 73 years old and in great physical shape. He now lives in Colorado but he will hopefully be able to attend the event.

The following was sent to Willem Oosthoek by one of Jerry Grant's co-drivers from his racing days:

Jerry Grant was the affable guy that co-drove with me at the 24 Hour Daytona in 68 in the 67 Sunray-DX Corvette #31, which we placed 1st in Grand Touring, 10th overall, highest an American built car had placed, at the time. Jerry was invaluable to the three car team which included drivers Peter Revson, Don Yenko and the likes, for he was the only driver on the team that had “round-round” experience and Goodyear had never “shoed” a vette for that track! The Vette never missed a beat (all Jerry and I had to do is drive it swiftly)

The Vette today is on Long Island owned by Glen Spielberg, meticulously restored by Richard Prince.

Grant was a great endurance driver, as shown with his performance at Sebring with the Ford and Dan as co-driver. What happened to the car 1 lap from the finish is akin to what happened to Pierre Levegh and his Talbot at Le mans in 1952. Pure crummy luck.

The date of the RIAM event honoring Jerry has been changed due to a change in the Grant's family plans, and will be earlier in October. As soon as nailed, I will post it here with a link.

Missed at Monterey...a number of people hadn't heard that he had passed away:

Please join us to celebrate the life of our departed friend

If you would like to speak or do a presentation of Jerry, please let us know when you RSVP so we can schedule everyone.

If Needed: Directions and Discounted Accommodations are available at time of RSVP Apologies for late posting this tribute to Jerry found on the windscreen of his Lola T70 seen at Concours on the Avenue, Carmel by the Sea.