Performance Automobiles was based in Hobart and founded by Dennis Pooley, John's father. Dennis was from the UK and Performance Automobiles were originally VW dealers, and they took on Subaru in the early 70s. John took over the business after Dennis retired and he ran it for a number of years. The family now runs the successful Pooly Wines, which Dennis started with a small vineyard in the Coal River valley. PAs are now agents for Subaru, VW, Porsche and Mercedes Benz.

Dennis P did indeed hail from South London, a friend of my late father before they emigrated to Tasmania. I'm sure Vic would have been delighted to know that a vinery developed from the motor business as they would have enjoyed the odd glass when attending Le Mans back in the day.

Despite barking up the wrong tree on Tasmania's (Goss/Bates) Performance Cars and the (Pooley) Performance Automobiles (refer previous page last couple of posts) it's good to see something good came of the mention of the Pooley's.

Thanks for the clarification Geoff, I'm not sure where the VW connection started and ended, but they sold and raced BMC cars in 1967.when there was a BMC factory magazine run a feature on them. One of ellrosso's oldracephotos snappers had the gig for the feature photos (Geoff Harrisson).

Just to give a bit of background to Performance Automobiles (and various pics). They were very prominent amongst the Southern sporting car/racing scene from the mid 60's onwards. John Pooley built the rear engined VW based sports car and from memory that was his first race car (refer accident pic with Goss FJ behind - Baiilie Galaxie just visible at rear too). In 1967 John and Mike Dorney ran two Cooper S's (black /gold roof) at local Tassy events. Mike's dad was a well known doctor in Hobart and Mike's day job was an ambulance driver. In 1968 Mike's S was painted gold with black stripes and John continued with his in PA colours. John dipped out of regular competition (to my knowledge) till 1975 when he purchased the Tom Naughton Porsche and also raced the VW Passat. He may have had the odd go in a Vee PA's sponsored , 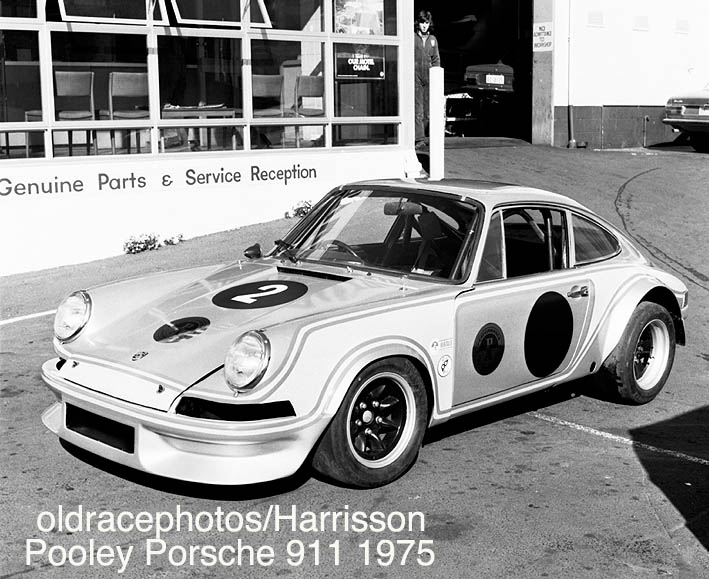 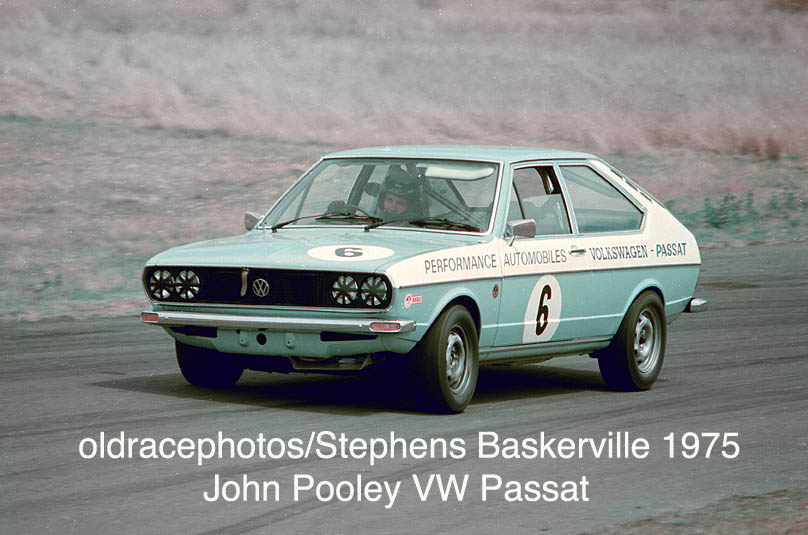 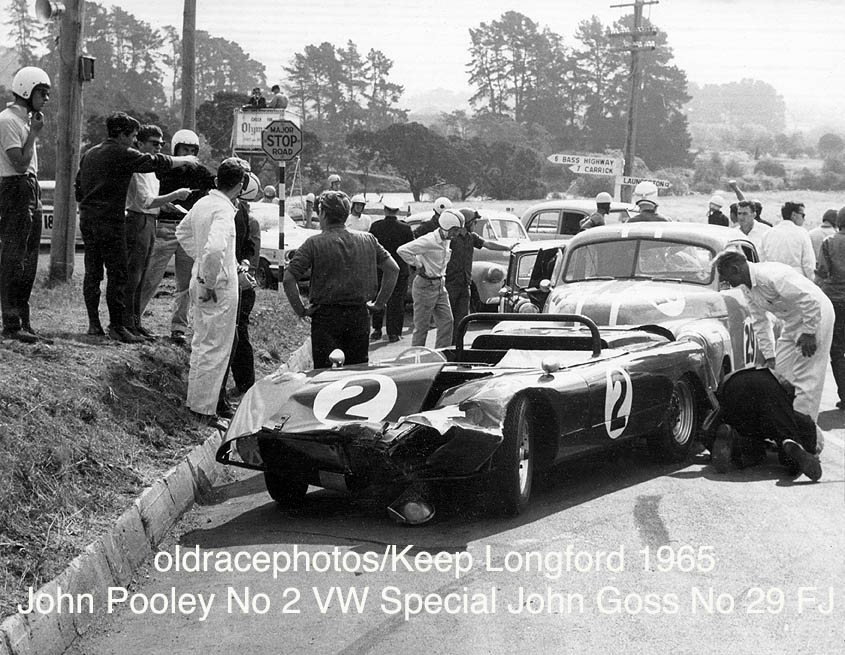 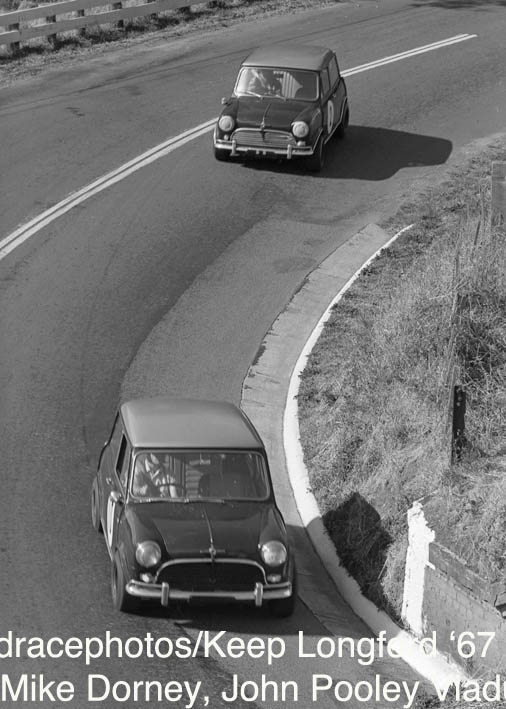 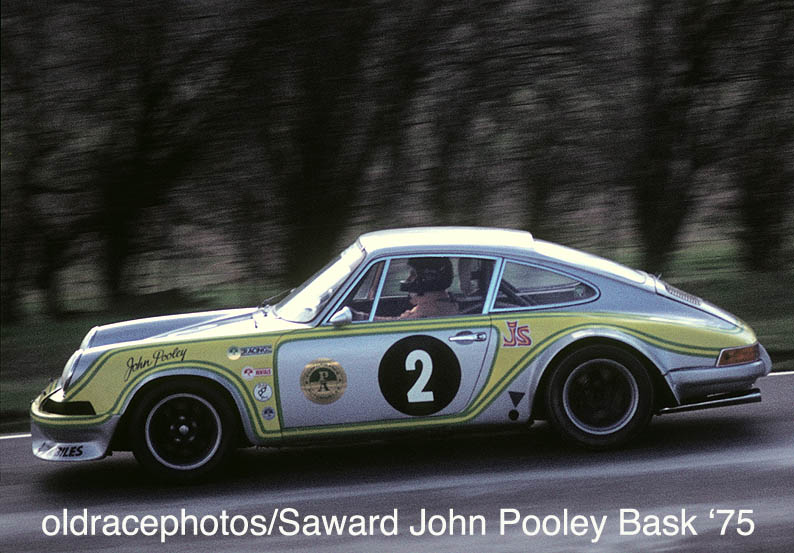 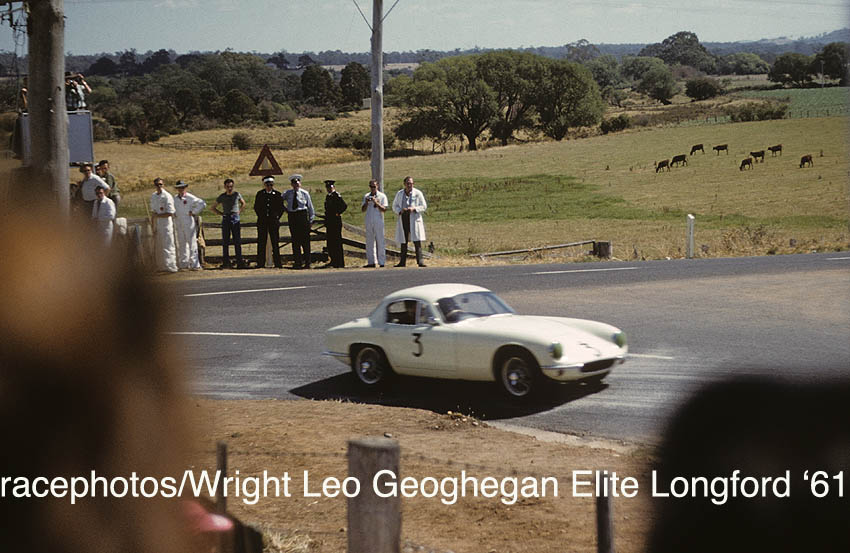 but I think he was effectively out of it after 1975.

Geoff Harrisson knew John well and we had a good chat with him at the HSCC 50th Anniversary (Bask) in 2004 when we launched the oldracephotos website.

Pooley Wines does very well these days and is pitched towards the upper end of the quality scale. Their HQ is a beautifully restored historic homestead on the LH side of the road as you go into Richmond and I think his children are involved as well (so I've been told). Shot of Leo Geoghegan in Elite at Longford to get back on thread.

To add to the stunning Geoghegan photo posted by Lindsay, if you click the link it will take you to one of the series of Lotus Elite features pmurray orchestrated as editor for the LCV magazine on the Australian delivered cars.

This link will take you to the feature on Derek Jolly who imported the early Elites. If you only scroll as far as page 15 then I will understand the reason.

Originally posted by cooper997
To add to the stunning Geoghegan photo posted by Lindsay.....

It actually is stunning...

That corner would have been the MOST important corner on the circuit for the Elite. An awkward braking area as they came flying off the Long Bridge, a tight climbing corner with solid kerbing leading to the longest straight. All of this would have been so important for a 1220cc Elite dicing with much bigger cars.

I just noticed the posts in relation to John Pooley of whom I have fond memories.

In the mid-eighties I was a Manager of a Melbourne based accounting firm which specialised in motor dealers and via Geelong's Porsche Dealer, Chris Taylor (Motors in Mercer Street) we were referred to 'Pools' , at that time Performance Automobiles were located in 269 Davey Street Hobart and had Porsche, Subaru, Volvo , and perhaps one or two other franchises.

JP was careful with the $, so on my trips there I stayed with he and his family at their home, a farm they had at Campania, which is a drop kick from Richmond where Pooley Estates is now. The drive with John to Campania was great- safe, fast! Libby would cook a meal from farm produce and John would produce a post meal Port and the work continued well into the evening whilst 'the meter is off- it is off isn't it Mark?!,

Several times in the evening we walked into the next valley where Johns mum and dad had a farm- and where the first grapes were grown. For years I was sent bottles of the wine which at that stage was Chateau Cats Widdle. In the morning we would go for a run, he never did enjoy the jokes about his cute sheep explaining that he was a Tasmanian not a Kiwi.

We kept in touch and years later I bought a 3.2 Carrera from him, a memorable trip my then 4 year old son still remembers, not least for him chundering on the plane, in the rear seat of Pooley's Subaru demo car- JP picked us up from the airport, and in the ferry on the way back to Melbourne! When I got the car to Melbourne it was checked over by Porsche Melbourne as JP and I had agreed, 'it had been hit by the Southern Aurora' , the whole front of it had been replaced. JP sent the car back to SV's in Sydney from whom he acquired it, refunded my money, costs and knocked on my door in Melbourne several weeks later with a Subaru loan car he let me have for a couple of months! A very honourable guy to do business with.

Roll forward another few years and he invited three of us down to Targa to have dinner with Walter Rohrl, his wife, Klaus Bischof (Porshe Museum) Walter ran a 911 of some sort that year- somewhere I have notes of that conversation, if ever I can find them they will form the basis of a nice article!

I've lost touch with John but I do know he sold the dealership business some years back but he didn't sell the dirt- three years ago when last I was in Hobart the dealership premises were still there, albeit all closed up, a shame really as it was a very busy, buzzy place in its heyday.

Time moves on- it's amusing that the two little kids on the farm at Campania are now the wine makers/operators of Pooley Estates and that the wine is now far from Chateau Cats Piss!

John Pooley, a gentleman of the old school and fine businessman and driver .

I'd forgotten that one. They had been dealing with Proven Products since back when it was Peter Antill Motors. 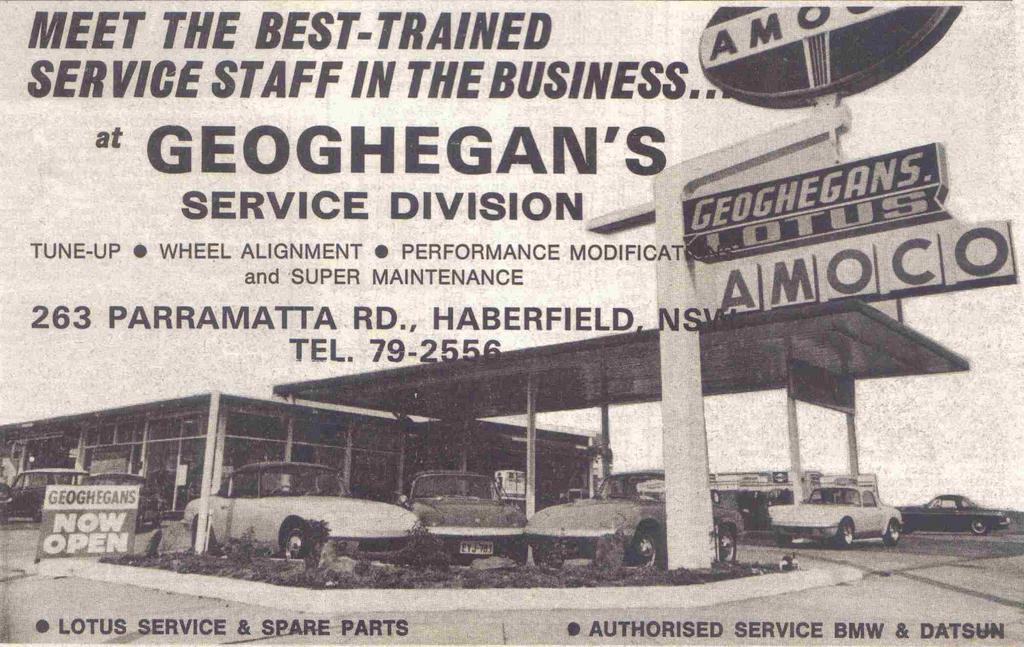 Nice story Mark. John was racing the Cooper S at my first ever race meeting at Baskerville in May 1967 and was one of our top Mini racers in Tassy back then. Mike Dorney used to race under the PA banner back then too.

John called in on our trade tent at Bask in 2004 when we launched the ORP website at the HSCC 50th Anniversary meeting and had a good chat with Geoff Harrisson and myself. Very well regarded in Hobart circles.

Just a quick pic of him dicing with Tony Calvert's EH at Syms in 1967 - Copyright : David Keep (one I had on the desktop to go on the ORP Instagram page) 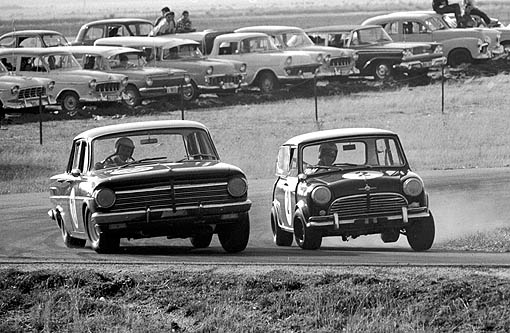 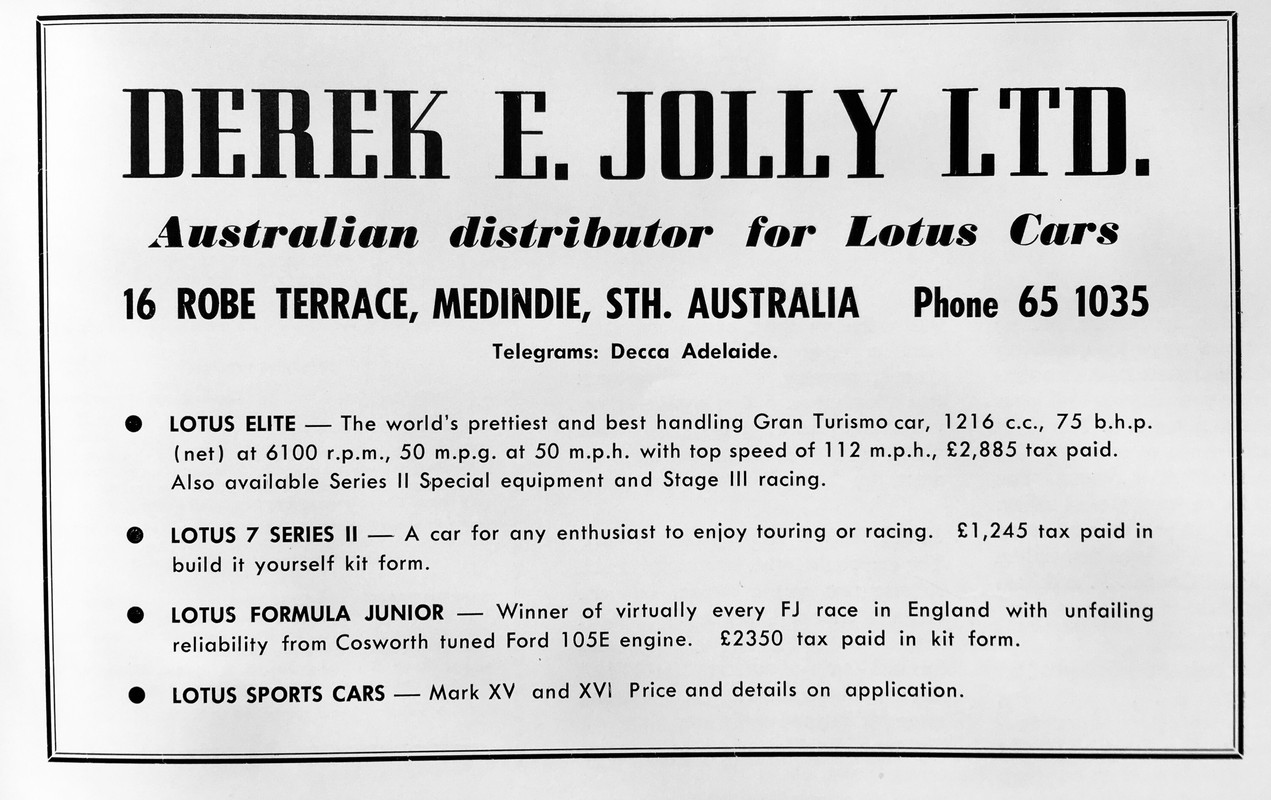 I've tried messaging 'DanTra2858' about the matter following, as he worked at Geoghegans about the time, but I haven't heard back. I'm hoping he may spot this and reply. (edit - reply received, thanks)

With the restoration of the Bob Caddy Lotus Cortina complete the only bit of information missing is the 12 months between when it was traded to a BMC dealer for a Morris 1100 and it being purchased from Geoghegans.

In addition to the Geoghegans logo on the rear window the car sported two green stripes with gold trim (Castrol livery) on the front apron, when purchased from Geoghegans. Fascinated to know the origins of the stripes. A workshop prank or a marketing ploy maybe? 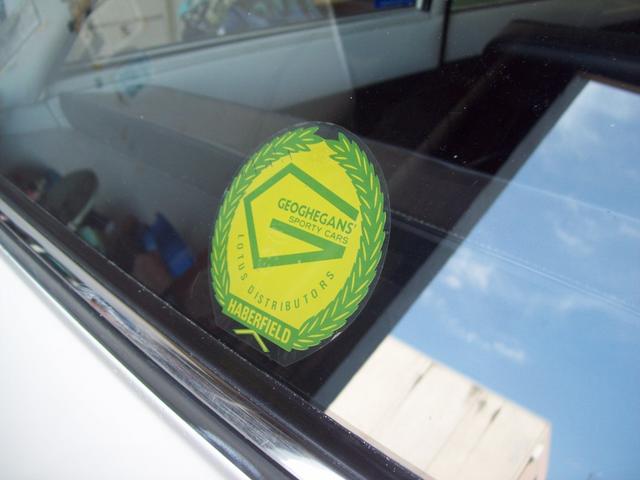 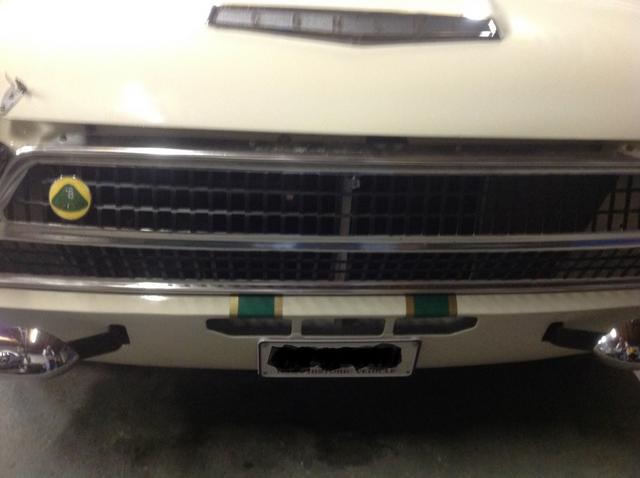 Attention Mr Medley; I passed on your "kind regards" to Stevie. He was stunned that the term 'kind' was in your vocabulary!

Please advise Stevie that I never forget a poor quality insult-- of which he attempts one. And I am not only kind, but also witty and handsome.

A couple of photos from the Geoghegan archive, appearing recently on FB. 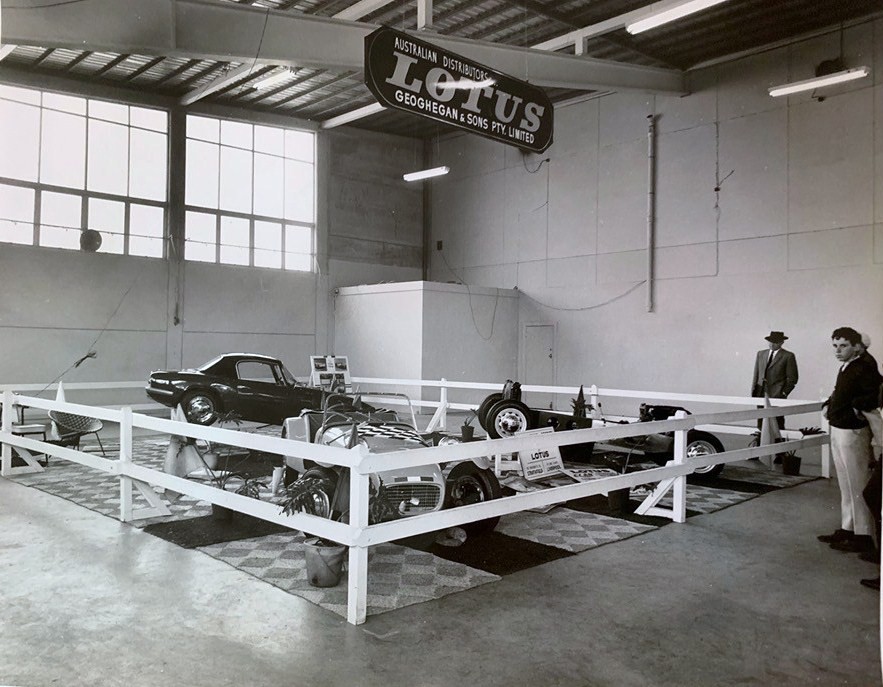 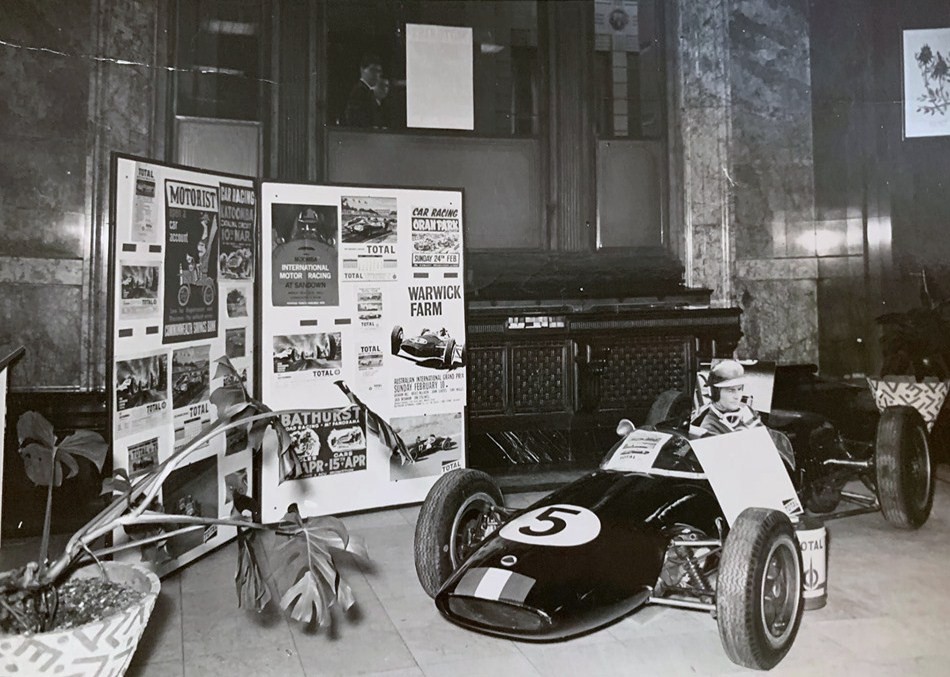 These photos appear to be of different show events. The last photo appears to be from late 62 / early 63. The poster for the Warwick Farm event states it is the Grand Prix and 10 Feb - the only time that occurred was 1963 - the Bathurst date is 15th April - that again is 1963.

My guess is the car here is Lotus 20 20-J-960. The car carries the No.5 and that is the number given to the Geoghegans at Catalina in March and May (63) and although I don't have reference to the January meeting 63, l'll bet they carried that number there too. Just before that  (20th January) they competed at Calder in 960 also with the no.5 for the car.

I agree Ed that the two photos are at different venues

The first is at a motor show at maybe the old RAS.

The second is very different IMHO. Look at the marble columns and the woodwork in the counters. It may be in a CBD bank office. It is certainly not a motor show

I don't think it's the showground...

The more I look at the 2 photographs the more I tend to agree that the first one was taken at a motor show, possibly the old Sydney(International?) Motor Show at the original Moore Park showground whilst the second appears to be in a Commonwealth Bank building.

The "Motorist" signage on the display board and the window appear to say Commonwealth Savings Bank.

The Commonwealth Bank building in Elizabeth Street Sydney near Martin Place has a lower floor level that can be seen from the footpath where the 2 gentlemen are looking in through the 3 pane window fixture that still exists today.

Obviously I could be wrong but I was walking past the bank yesterday and it caught my attention so much so that last night I got the old magnifying glass out to closer examine the photo. I checked the Google street scene and whilst the sunny conditions and reflections tended to prevent seeing inside the rest of the façade looks similar.

I recall the first photo was at the Sydney Motor Show at the old Moore Park Showground.

It was taken in the pavilion to the south of the very big Commemorative Pavilion, in the pavilion with the red and blue squares on outside wall (I'd love to post a photo of it but beyond my skills)

The main big exhibitors were in the Hall of Industries and Commemorative Pavilion. The overflow was in this much smaller pavilion, hence the few spectators.

It must have been 1964 or later as Ed says in post #1 that is when Geoghegans first imported Elans.

as noted by chatswood47 the second photo is in the glorious old Commonwealth Bank Building on the corner of Martin Place and Elizabeth Street Sydney
I alluded to this in post #168.

I was familiar with place as I used to work in nearby Philip Street.