Does anyone knows which event was hosted at Monza on June 24th, 1954? 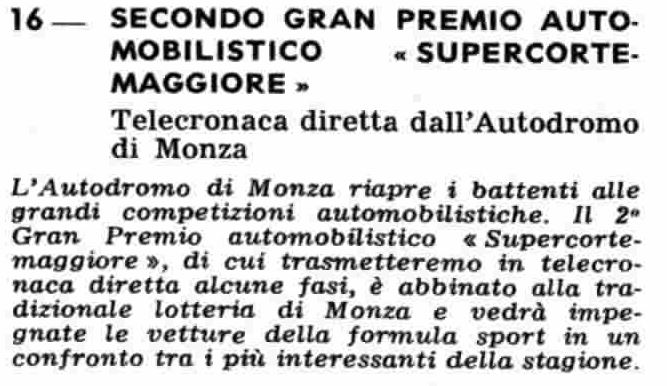 The F1 race was of course much later in the season, the Nations GP was on September 12 and there is no mention of an Italian race on Formula2.net.

It was a sports car race

Does anyone knows which event was hosted at Monza on June 24th, 1954?

The F1 race was of course much later in the season, the Nations GP was on September 12 and there is no mention of an Italian race on Formula2.net.

The SUPERCORTEMAGGIORE event was for sports cars only! In 1953-54 it was for 2-liter cars while from 1955 on also cars with 3-lifer capacity participated.

As the results in the Racing Sports Cars link above show, the 1954 race was for cars up to 3-litres.

An example of race sponsorship: Supercortemaggiore was the brand name of the AGIP high octane petrol

Ever heard of the "1000 km di Monza", one of the classics of the sports car calendar?

I was wondering the same thing - Did they later move the date from June to April?

Nor was the Gran Premio Supercortamaggiore always held at Monza

As I understand it:

The Gran Premio Supercortemaggiore was run in 1953 at Merano (won by Fangio), on the old Monza road circuit in '54 (Hawthorn/Magioli) on the Monza road and track in '55 (Behra/Musso) and on the revised road circuit in '56 (Collins/Hawthorn). CORRECTION: it was the 1956 race that used the combined circuit.

There was a separate series of races at Monza called the Coppa Inter-Europa, run from 1949, in later years as a GT race as support for the Italian Grand Prix. There were often two Coppa Inter-Europa races, for smaller and larger cars. The last race for larger cars was in 1964 and the first race called the 1,000 km di Monza was in 1965 so a case could be made that the 1,000 km race replaced the Inter-Europa but it was a new event.

The results in the Wikipedia page linked to above seem to have the Coppa Inter-Europa winner from 1949 to 52, the Supercortemaggiore from '54-'56 and the Inter-Europa again from '57. The result it gives for 1953 refers, I think, to the Gran Premio dell'Autodromo, usually run as a single seater race and only in '53 for sports cars.

As the results in the Racing Sports Cars link above show, the 1954 race was for cars up to 3-litres.

So was the 1953 race. In "Challenge me the race", Mike Hawthorn refers to a 2-heat aggregate race in which he drove a 2.5 litre 4-cylinder engined Ferrari, while Villoresi and Farina had 2930 cc V12-engines. This race was the day after the F1/F2 race at Rouen, and the Ferrari drivers travelled by overnight sleeper train from Paris to Milan.

Hawthorn (or ghost-writer Wilkins?) also describes his win with Maglioli in the 1954 1000km "Supercortemaggiore Grand Prix" in the book.

But that wasn't the Supercortemaggiore. As mentioned above, the 1953 race was held ar Merano, on 6th September. It was for 3-litres cars though.

I said earlier that the June 29th race (the one referred to by Wenoopy was the Gran Premio dell'Autodromo. That is the way it is described in Settant'Anni di Gare Automobilistiche by Emanuele Carii. However, a brief report in Motor Sport August 1953 is headed Inter-Europa Cup. Carli says that the Inter-Europa was, as usual, a GT support race for the Grand Prix.

One further point on the Wikipedia Monza 1,000 km page. As I noted earlier, for several years it gives the results of the Coppa Inter-Europa. This was usually run as a series of races for different capacity cars. In most cases the winner listed is the winner of the unlimited race. The exception is 1964 where it lists Slotemaker's Porsche 904. He won the 2-litre race but there was an unlimited race won by Vaccarella's Ferrari LM. The unlimited race was a victim of the squabble between Enzo Ferrari, the ACI and the CSI over the homologation of the LM and was not part of the GT championship.

I don't think too much can be read into the Supercortemaggiore or Coppa Inter Europa races being part of a series that became the Monza 1000kms except that Monza saw the need to run sports car races at an international level.

Ref. the Coppa Inter-Europa in 1964 let's not have anyone repeating the old myth that Enzo Ferrari got it cancelled at the last minute to prevent Shelby from winning the GT championship. As Roger says it was a victim of the squabble over the homologation of the 250LM. Can't help thinking though that Salvadori's Aston win in '63 was embarrassment that they maybe didn't want to repeat!