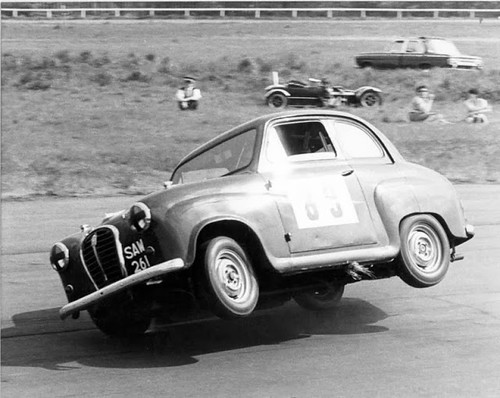 Looking at Julius Thurgood's website for his A30/35 race series I noticed this photo, not because it is a pretty action packed shot, but rather because of the car in the background, pointing the wrong way having obviously retired from an earlier race.

From the poor detail in the photo it shares many similarities with my unidentified clubmans project, particularly the layout of the very long trailing links being very widely spaced and the apparent lines of the chassis top rails.

Julius thinks the photo may have been taken in the late '70s / early '80s at a CSCC race, but he isn't sure. I thought it looked much earlier. The fence could be Aintree?

Does anyone recognise the car? I know it's a long shot, but if I can identify the event it might be possible to identify who had a DNF in the clubmans race, which might help me identify what the car in the background is, and probably confirm it isn't the one in my garage!

SO, over to the TNF masses.

That's what I initially thought, but of course, if it was the late '70s such a car could well be there.

I think all but current model year cars should be banned from old photos! :-)

St Johns Ambulance could do with more definable uniforms too.

I'd have expected by the '70s more stickers would be on display, and I wouldn't expect the skinny steel wheels either. I don't think Julius took the photo, so his dating of it might be out?

Searching the web, I came across this photo of Aintree. 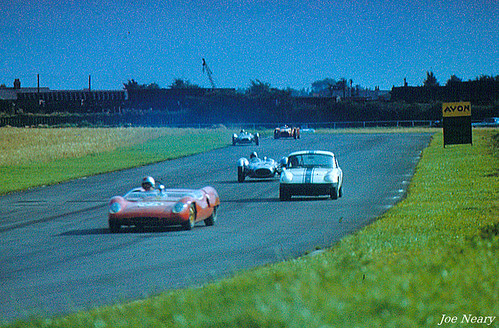 The fence is certainly the same, but can anyone think of seeing them at any other circuits?

My car was 'discovered' in the late '80s in North Wales / Cheshire border area, which would tie in with racing at Aintree.

From my hazy memory, it looks like a WRA mk2 rear engined clubman's car as raced by the Cheshire Racing Team by such as Max Ward.  George Whitehead built them before he moved down South to race his quick Anglia.  He also built a one off sports car similar in appearance to a Lotus 23.

It can't be rear engined, can it?  to me it looks like the classic front engined layout - long trailing links forward from the rear axle and the roll hoop sticking up above the rear wheels.

I think the light coloured lump on top is probably the drivers helmet, with the engine just visible at the front.

Any suggestions as to non production / one off (i.e.not Mallock, DRW etc) clubmans type cars running in that area would be welcome of course.

Here's my chassis as I bought it. 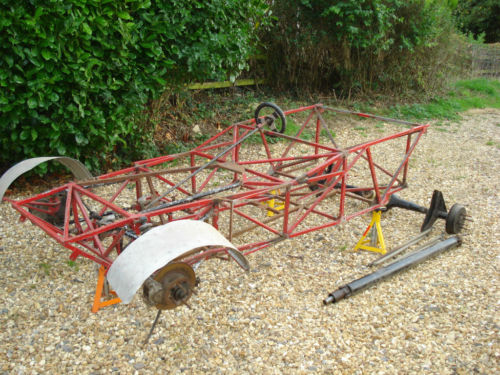 I've previously sought help with this search in the 'Historical research' section of TNF, but not here, so any suggestions would be welcome

Searching the web, I came across this photo of Aintree.Al


Alastair, the red no 84 car on the shot scrolling next left on that site looks interesting...... Is there any aware of contacting the poster?
Roger

I think I should be able to contact them through Flickr, but haven't quite worked out how just yet. :-) will have another look tonight

However, having spoken with the Liverpool Motor Club, it looks like the A35 may be  being driven by Tim Blackburn in race 5 at Aintree on 17/5/1980. If so, sadly, the roll continued and I'm afraid  that was the end of his race for the day.........

Race 1 of the meeting was for 750MC cars, and Race 6 for F1300, so those could be possibilities, though only if the driver decided to stay on and marshall, rather then returning the car to the paddock after going of in his own race (or practice if it's a F1300 car).

I just need to track down a programme for the event and see if car 84 was in the race before, as it looks like a 750. Will reply to LMC tonight to see if they have any more records

If only the driver hadn't sat with his back against the car- I suspect he's obscuring the race number.

All good fun, and this is the fun bit of buying old racing cars

Al, there is someone, poss Graham Heath??, who published a record in 3 parts ISTR covering practically all the races at Aintree. I think it was covered on the book thread a while back. Perhaps a TNFer has a copy. I will check my own records to see the name of the man who most generously supplied me with many period Aintree race sheets. Pls pm me if your e mail has changed
Roger Lund

Cheers Roger! email is as before.

"I`m afraid I don`t have the date. I still have the slide which I took on the Aintree circuit at a Tuesday night practice of the Aintree 200 club members.If I were to have a guess I would say late 1960`s early 1970`s"

so a fair bit earlier, and it seems he doesn't have any others. F1172, I suspect