A lot of history started here... Cooper's Garage. Just the place for a well heeled enthusiast to store his fleet. Well we can dream of a Cooper on the forecourt again. Or a racing car being tested along Ewell Rd..

The Met used the site for their traffic branch from 1968, until about 12 months ago.

This would make an ideal Cooper museum.  If, of course, there is sufficient interest to support one.

If someone's willing to sand those walls down for a year or so, we might get some of the original engineering drawings back...

As enthusiasts we can only hope that if Mike Cooper was to release the freehold (as maybe considered in that link's terms) then some prat doesn't come in with the wrecking ball for some horrid multi-level development.

Can some TNFer who lives in SW London go to the agents and arrange a viewing as a potential tenant.............and take some pictures inside.

Cirrus and I went over to the old Cooper works over the Christmas/New year holidays a good few years ago and posted some pics on here....I wonder how i could find that thread now ??

It might be this one, Gary, but sadly Cirrus's photos are no longer there - the Cooper factory photos were in post 17:

Well it's not Maranello, but if you're a Cooper enthusiast then this sign means something. 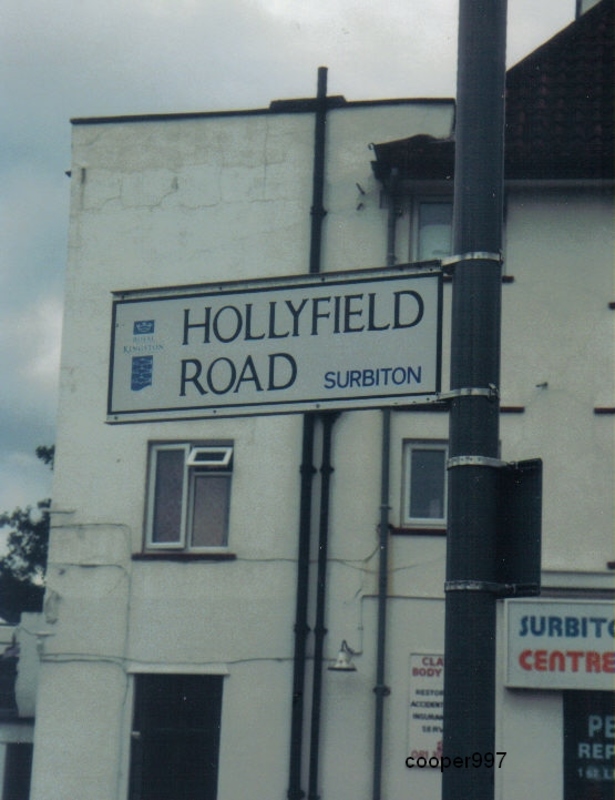 I've only ever been out of Australia twice. First time in 1994 and then in 1997 - both times UK-bound. With the second visit to take in Goodwood FoS, amongst lots of other mainly motoring related visits. It was on Friday, June 13, 1997 that I decided to gamble the London traffic and head to Chaters bookshop at Isleworth. Then afterwards a decision was made to see if I could navigate my way to Surbiton. Not that far from memory, but a bit of a maze for a mug from the other side of the globe.

As the navigation was by old school road map, I pulled over to confirm my bearings. Upon looking up there was my destination around 200 metres in front of me. Parking 'my' borrowed Mini in Hollyfield Rd, directly across the road from the Police traffic branch, aka Cooper's Garage, I armed myself with the camera and took a couple of photos. What followed next was totally unexpected, yet still to this day fully appreciated. Plus, I dare say since the global security changes relating to September 11 not likely to have happened too much since. I was greeted by a police officer, Clive A, who upon finding out I was a Cooper enthusiast invited me in for the guided tour. He was a motor bike enthusiast and quite used to Cooper enthusiasts turning up. He'd been there since the Met set up their Traffic branch in 1968 and was the last of the original crew still at the branch. He also mentioned there was a new headquarters being set up. So as he commented to me was looking forward to being "first in and last out" at the time. So I'm not sure what actually happened that meant the police hung around at the site as long as they did.

I also recall in conversation at Ferring with John Cooper, or Mr Cooper as I always addressed him, about Surbiton. He still owned the property and that was for his 'retirement' - he was nearly 74 at the time. But what he was really saying to me was that it was his superannuation.

So here's some photos from the tour. I'll add some more photos, including a couple of internals, later. 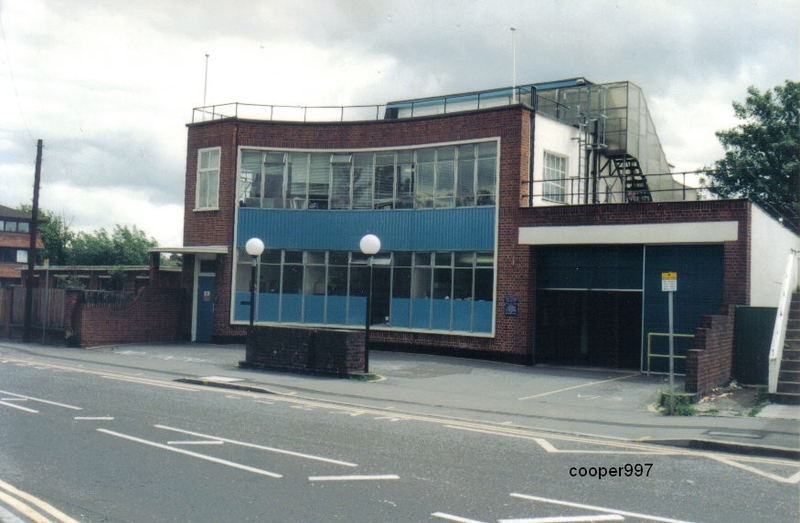 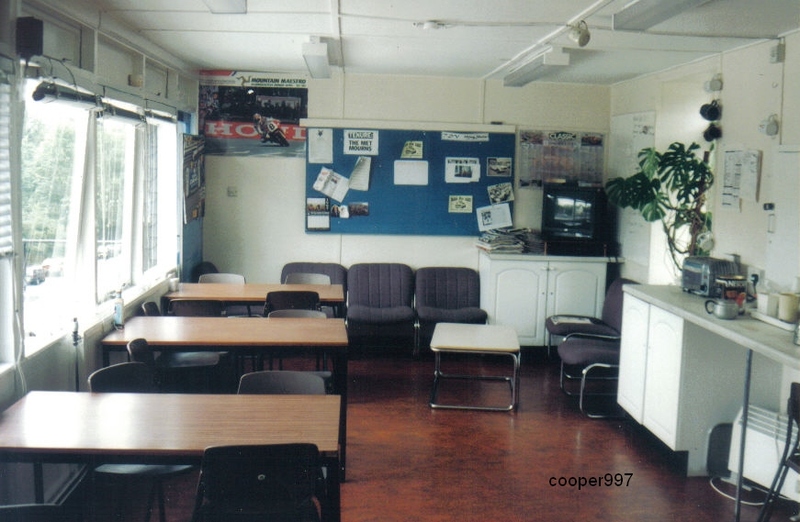 Tea room in 1997, but once Owen's drawing office 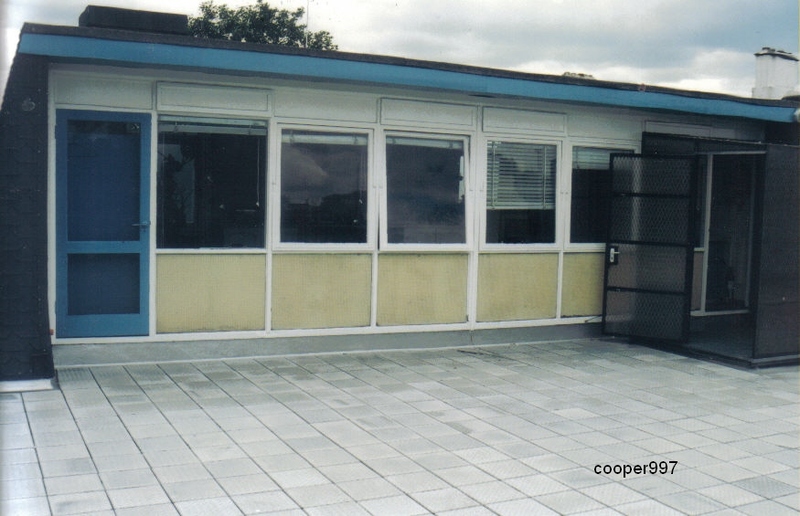 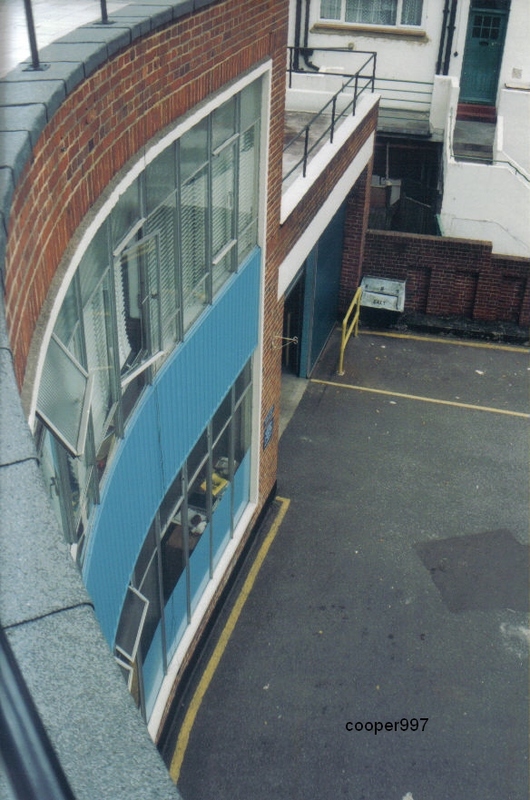 It looked like Charles Cooper's Flying Flea at the back of the workshop, behind the Vauxhall. For one awful moment I thought the Series E Morris was going to pass him while he was tooling along beside the 152 Bus.

Reading the real estate agents blurb on the property, it's a bit of an understatement to describe the "birthplace" of the modern day, rear engine racing car as "the property was originally a garage". Quite so, but it was hardly used by the occupants for knocking out M.O.T.'s for the masses !

The bleedin' agent's suggesting it may be suitable for a Children’s Day Nursery.

See... this is what's wrong with yer actual world these days innit!!!

How better to breed the next generations of motor sport enthusiasts?  As the Jesuits say "Give me a child until he's seven and I will give you the man".

Although mixing children and Catholic priests is perhaps not seen in quite the same light these days...

It's a pity there's only one internal photo on the estate agent page, looking like the first floor towards the rear?

How does it fit with how it was in 1966? The canteen is the second floor Drawing Office-as-was?

Am I right that the big shed at the back of the later buildings was the same building seen in early photos c1947?

This is the view from the estate agent's brochure.

I believe the block at the rear is the toilets. There is a back door from this that leads via a footbridge across a little stream to the car park of the pub on the main road. Not sure why!

Comparing those photos it does not seem the same building. Walls, roof trusses are all entirely different,

The pics from the front are the same. But not inside.

Comparing those photos it does not seem the same building. Walls, roof trusses are all entirely different,

The pics from the front are the same. But not inside.

People are confusing the Canada Road workshop (as seen in "GrandPrix") with Hollyfield Road.

"Back to the Weybridge/Brooklands/Byfleet area in Canada Road off Oyster Lane ( with the Byfleet Banking of Brooklands Motor Course visible at the foot of gardens of the houses on the left ) the last major factory building on the right at the end of the cul-de-sac which is Canada Road was the Cooper factory in the Chipstead Motor Group/Cooper-Maserati era 1966-68 - where the boy Ron Dennis used to be out the back cleaning freshly-imported Moskvitches."

Here is a map - has anyone been there? Annoyingly I was at Brooklands only a few weeks ago and could have had a look if I'd known.

I've driven past it today twice...and I'm sure Cirrus drives down Oyster Lane every working day...........

I do my shopping at Tesco & M&S (bottom right of pic) and I got my double glazing from a company in Abbot Close, of which Canada Road runs, but I never knew of this connection.

For those with an interest in Cooper (and brief mention of Halseylec), there's a feature in the March 2019 issue of MiniWorld magazine on a man who spent a lot of time within the walls of the Cooper works in all its forms over many years. Due recognition with a 7 page feature on Michael 'Ginger' Devlin.

And yes I realise it's old news in the UK, but this issue has just arrived in far off Australian newsagents.

This link will hopefully take you to a 14 or so minute youtube piece by Rob Wilson and Peter Windsor. It's from Feb 2016, when Porsche specialist, Charles Ivy were just getting things tidied up for their move to the famous site.