I seem to remember that in the early 60s the hillclimber Phil Scragg got hold of a Chaparral 1, with the intention of using it on hills in the UK.  I even remember seeing a photograph of it in action, minus bodywork, in Autosport.

Anyone know how it fared and what happened to it?

Richard still has it and has written a good book on Chaparrals with some bloke called Doug - that presumably recounts the history when Phil Scragg had it (I've not got my copy handy to check).

Some more stuff from various earlier threads, including info from Richard Falconer himself:

I have now done what I should have done in the first place- check in the Nye/Falconer Chaparral book. The car is a Chaparral 1, chassis 005 bought in '63 by Phil Scragg, who had a horrible season with it, " it would not go straight, and would not turn corners," plus the engine did not deliver the expected power, quote his mechanic. In Dec '63 it was sold to Rotheram agricultural machinery manufacturer Howard Parkin, who then set about converting it to 4wd, and thus it became the Cannon Ball Special.
Usual disclaimers; for thos enot familiar with the work, the Nye / Falconer Chaparral tome is everything you would expect it to be. Published by Haynes in 1992.
Roger Lund

I had a good chat with Richard Falconer about both Chapparals. Chap 1 started life ordered by Phil Scragg for hillclimbing but he didn't like it and quickly sold it. When Richard found it it was minus body and the chassis had been chopped around a bit. He paid £120 for the remains and found that Walter Wolf had a body buck which he swapped with Richard for a washing machine.
Chap 2 is certainly a replica, but built around the almost unique 2-speed GM transmission which was never offered for sale. It has a torque converter that locks up at 3500rpm. The tub is fibreglass as the original was.
Sadly it only got one competition run at Shelsley because Ian Wright was at the top of the hill with Chap 1 when he was due to run. Bit of a muddle really but I think it's agin the rules for one driver to compete in two cars.
Otherwise it was a great meeting with masses of lovely cars in the car park Concours and lots of people in period dress. The hope is that it will develop into a social gathering for Classic enthusiasts in the same style as vintage Prescott for the VSCC. Maybe HSCC could get interested.
Chris

I would be pleased to answer any queries anyone has about Chaparral 1 and Chap 2. However I would like to make one minor correction to Chris's comment above. He has misunderstood my story about Walter Wolf. In the mid-70s a friend of mine, who was an unofficial scrap man to the Formula One teams, acquired several sackfulls of polyurethane from the Wolf team. I swopped him this for a washing machine. Later I took a week off work, went to a corner of a shed on the West Wilts Trading Estate, made up some profiles on the Chaparral chassis, and infilled between them with said polyurethane foam.
Some years later,mainly through the work of Pat Cuss, we ended up with a finished body. Of course only the 1963 Sebring Chaparrals had glassfibre bodies, but when the car was comprehensively wrecked in 1989 I was very glad not to be stuck with the bill for repairing an aluminium body. Funnily enough, my car does have surprisingly original features. I supplied 3 complete pairs of seats copied from mine to American restorers, and the first comprehensive work my engine has had was changing the head gaskets last year.
Richard Falconer 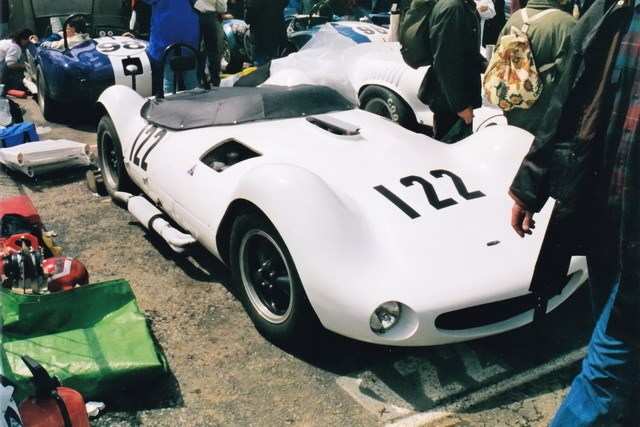 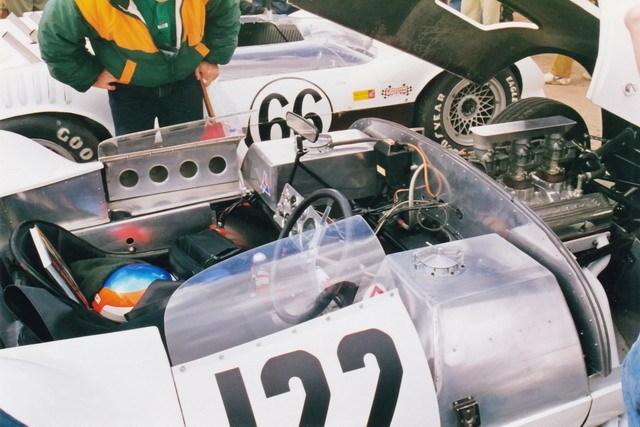 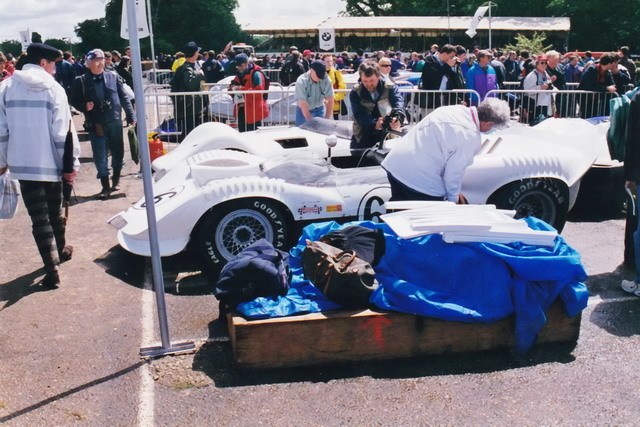 Thank you, one and all.

A nice photo of Jim Hall sitting in the Chaparral 1 at its first race: https://revslib.stan...log/pg295pb3682 (...with a Troutman-Barnes badge on the hood). He looks concerned about something.

He could be worried about the carbs setting fire to the bodywork.

When one of the UK historic race people was given one to look after (apart from Richard's car there is another in the UK now, which IIRC was built up from spares) he was told to always keep a fire extinguisher handy when starting for the moment when it sets fire to the bodywork - apparently it is a case of when rather than if!

Does anyone have contact details for Richard Falconer - I'd like to ask if he owned an early TVR Climax 1,098cc and competed at Brands Hatch 26th April 1964. The entrant is RDL Falconer

His brother runs Claremont Corvette , you might try there

I think Richard is still active in his profession in the Stroud (?) area so shouldn’t be hard to find.
I have his email somewhere, but my email account is currently up the spout and I cannot access any mails or contacts…

(though I’d have thought Richard would have been too young to be racing in 1864 - he’d have to be at least ten years older than me and having met him I’d think that unlikely. On the other hand he might have just taken better care of himself than I have…)