The new generation of steel belt CVTs for cars expands the Transmission Gear Ratio Range from the previous 6.0 to the current global top level of 7.0

The need for a higher "Transmission Gear Ratio Range" is more crucial in trucks, in agricultural tractors, in machinery equipment etc.

In the following image the PatTra mechanism (shown at "slow motion" at right):

A single-step PatTra (as in the animation above), using the same belt profile and the same minimum actual-diameter in the conical pulleys, doubles the "Transmission Gear Ratio Range".


Given the angle F of the conical pulleys, given the working width W of the belt, and given the minimum effective radius Ri wherein the belt is allowed to run on the pulley, the transmission gear ratio range (TGRR) is defined (and limited).

The effective radius R wherein the belt runs is calculated as:

wherein L is the axial displacement (i.e. the displacement along the rotation axis of the conical pulley shaft) of the one conical-pulley-half relative to the other (with L=0 when the belt runs at the minimum effective radius Ri).

The tan(F) is the tangent of the angle F.

For specific Ri and F, the R gets maximized when the L is maximized, so the maximum possible effective radius Ro at which the belt can run on the conical pulley is:

The maximum allowed radial displacement Ro-Ri of the belt as it cooperates with the conical pulley is:

The maximum pulley ratio Ro/Ri is:

As explained previously, the Lmax cannot be bigger than W (W is the effective width of the belt), limiting the Transmission Gear Ratio Range to:

limiting also the maximum allowed radial displacement RD of the belt to:

In the following image the control is mechanical (a variator in the drive pulley, at top, a spring with an actuation linkage in the driven pulley, at bottom) :

A different, and simple, approach, preferable for some applications, is the "comb" conical pulley wherein the two pulleys can get closer to each other without collision:

Another different, and simple, approach, preferable for some applications, is the "radial comb" conical pulley wherein the two pulleys can approach each other without collision (stereoscopic image): 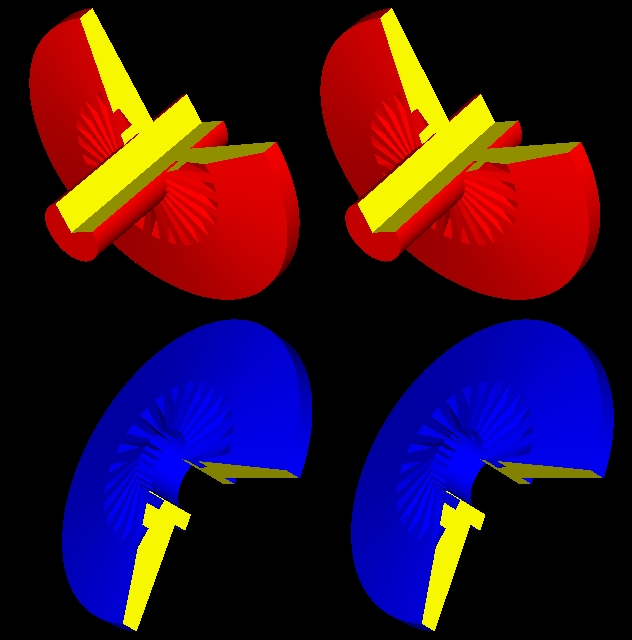 The grooves on the one conical pulley half allow the conical surface of the other pulley half to enter without collision, and vice versa.
This type fits with continues belts (like the elastic belts used in the scooters).

I like your first idea with the collapsing/telescoping pulley center.  The radial comb idea is more elegant, but I would be afraid that the comb teeth would chew up the edges of the belt.  Also, any little bits of dust and debris could get lodged in the comb and keep the pulley from collapsing fully.

See if you can make the inner part collapse where the comb is now. If the belt is not there it does not matter anyway.


I like the ideas too - but maybe the "comb" version would get blocked with bits of rubber etc.?

In practice, the way the belt runs between the two complimentary "radial combs" may improve things: for the same torque, less clamping of the belt between the two pulley halves is required.

The optimization of the shape of the grooves is an interesting problem.
Is it better a single but wider groove at the big eccentricities, or it is better to divide the wide groove into a pair of thinner grooves?


By the way, the grooves can be made a little deeper to make room for any "little bits of dust and debris lodged in the comb", allowing the pulleys to collapse fully for a long time.

As noted there are already production link-chain type CVTs that provide a drive ratio close to 7.0, which is quite adequate for automotive applications. A rubber V-belt CVT would not be durable enough for any automotive use. If a greater drive ratio is required from an automotive CVT, there are approaches like geared neutral that can be used.

As noted there are already production link-chain type CVTs that provide a drive ratio close to 7.0, which is quite adequate for automotive applications. A rubber V-belt CVT would not be durable enough for any automotive use. If a greater drive ratio is required from an automotive CVT, there are approaches like geared neutral that can be used.

The PatTra CVT fits with “link-chain” V-belts (metal belts) and with rubber V-belts.
There are millions of scooters on the roads using rubber V-belts in their CVT’s.

You can add a “gearbox” to increase the “total” TGRR of a car CVT. Nissan uses a planetary one.
But again, with a basic CVT (comprising the two conical pulleys and the V-belt) having a bigger Transmission Gear Ratio Range, things further improve either with, or without, a gearbox.

A truck or an agricultural tractor with a bigger (and bigger) TGRR has more capabilities, and the PatTra can offer a much bigger TGRR.

Nissan and Toyota fight for years for a small increase (from 6 to 7) of the TGRR. The PatTra (with one step) over-doubles the TGRR and is easy in control and implementation (think how it effects the size / capacity of the torque converter).

if you want to avoid a “reduction gearing” (like those in the rear wheels of the scooters), the PatTra (applied, in the simplest case, only in the rear (the smaller) pulley) provides a simple and functional solution (I mean the PatTra with the radial-comb design).

The CVT automatic transmission is coming in fashion.

Here is a PatTra version providing a TGRR (transmission gear ratio range) over 28 (the current world top is 7):

Hello all.
Today it is published the US10,221,925 patent for the PatTra CVT (Continuously Variable Transmission): 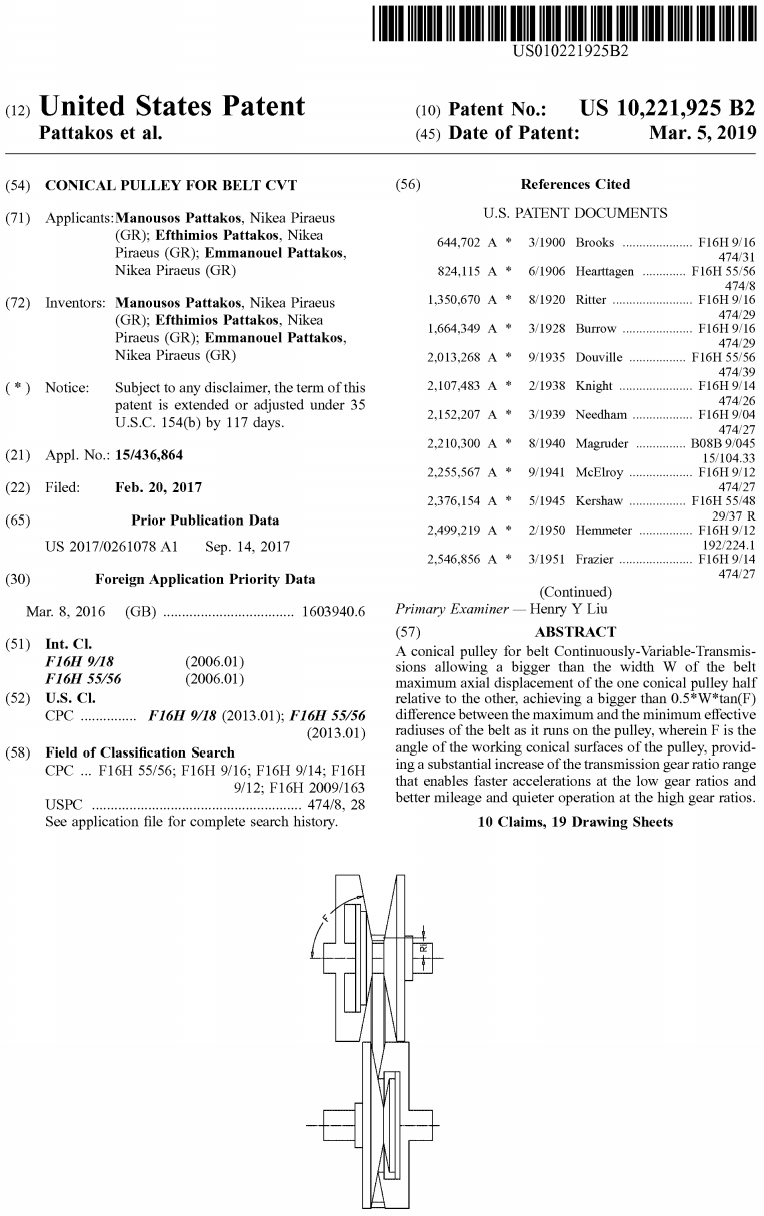