75 replies to this topic

First post has been updated. The latest unknown photos are:

T.S. Fotheringham, Bugatti T54, when he lost a wheel at Brooklands. Any idea of year or race?

Crash at Prescott. Paul Gibbons, Bugatti Archivist believes it to be one of two entries which carried #101 - Norton in ERA R4D (1958), or Merrick in ERA R1A (1973). All I can find is evidence that Merrick didn't turn up to Prescott, and I have no info on Norton

Michael Herman, Brands Hatch.  Seems to be a 500. A Mike Herman is listed on some race results at Brands in the early 1960s, but I can't find anything else. Any ideas?

The Fotheringham one may be in practice for the 1932 Empire Trophy. The preview in The Times (30/4/32) mentions 'connecting rod trouble earlier in the week'.

"Connecting-rod trouble" probably couldn't take the rear wheel off though. His engine also blew up during the race itself according to Motor Sport. When were the Vickers sheds being built (re-built?). Might give us a clue.

First post has been updated. The latest unknown photos are:

T.S. Fotheringham, Bugatti T54, when he lost a wheel at Brooklands. Any idea of year or race?

Michael Herman, Brands Hatch.  Seems to be a 500. A Mike Herman is listed on some race results at Brands in the early 1960s, but I can't find anything else. Any ideas?

In the second pic Dick Seaman in a blazer, collar and tie is striding toward the Bugatti and on the old Team Dan Brooklands races site there is Fotheringham in a Bugatti (but no type no.) retiring in the Gold Star handicap race on Whit Monday May 16 1932. I could find no mention of Fotheringham at this race in the updated Boddy Brooklands book, unless I missed it.

However in the background is the nose of Trossi's Clemens engined Duesenberg which did not appear at Brooklands until 1934 driven by Whitney Straight, so I suspect this must be 1934 or later when Duller owned it.

Pretty sure that's not R4D, steering wheel has the wrong offset, and there looks to be a front leaf spring.

I think it is unlikely that the photographs of Thomas Fotheringham's
stricken Bugatti were taken during a race as although Fotheringham was a Brooklands habitue racing various Bugattis the only occasion he was entered in a Bugatti T54 was in tbe 1934 BRDC 500 Mile race , where he was due to share the car with Oliver Bertram .

In the race the car retired with a broken gear lever , not a broken rear axle (it retired from the 1933 race with axle problems but was not driven by Fotheringham on that occasion) . Also the weather for the 1934 BRDC 500 Miles was wet unlike the glorious sunshine in the photographs
and the car wears number 29 and not its race number of 39 . Therefore I believe that the incident occurred on a general practise day in August or September 1934 .

That's very helpful GazChed. I did consider the possibility of a test day or practice session, there doesn't seem to be a lot of people around in any of the photos.

#29 Bugatti in this picture fits to crashed one. 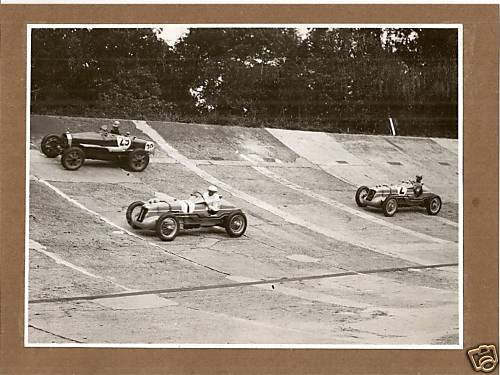 There were New Haw handicaps at March 16 meeting.

Next door lay the 4.9 Bugatti, once owned by Kaye Don and called Tiger II. Manby-Colegrave is its new owner, while Dudley Froy is to *handle it at all track events.

Froy turned out for this race, but sheared his back axle on the line. After being towed back to the Paddock it was jacked up, when one wheel promptly fell off ! The break revealed a fracture that had taken a long while to develop, and Froy shuddered to think of the 40 practice laps he had done before the meeting

You beat me to it ! However the driver on that occasion was Dudley Froy but it does look very likely that is the incident in the photographs above . For the record the meeting was the opening meeting held on March 16th .

Amazing! I'm convinced that's the one, brilliant work. According to the Bugatti Trust, the Kaye Don/Dudley Froy Bugatti was a Bugatti Type 54, chassis number 54203. Did T.S. Fotheringham ever own or race it? Or did the current owner of the Bugatti get that wrong? Or are we wrong?

(Weren't you over at The Fastlane with us a few years ago Vladimir?)

Weren't you over at The Fastlane with us a few years ago Vladimir?

Probably yes. There are too much forums to follow them all.

Apparently appeared in an Autosport magazine in 1967 or earlier. Seems to be Brands Hatch. Paul, regarding your post of the two Elans (26R ????) I have come across that image before somewhere ? there are Lotus registries, you might be able to find an answer there.

I'm sure some one on this forum will come up with the identification, bumping the post might bring a reply.

Looking at the photo it seems almost undoubted that the pelvic injury would have been caused by the nose of 108 which looks to have T-boned 164. In that case a harness would have been superfluous.

The photo of the Elans is from Dr Michael Henderson's book 'Motor Racing in Safety'.

I posted that Elan photo on another forum, three venues have been put forth with out a positive identification,  Oulton Park, Mallory Park or Lydden Hill.

I posted that Elan photo on another forum, three venues have been put forth with out a positive identification,  Oulton Park, Mallory Park or Lydden Hill.

My money is on Lydden Hill. The bank at Chesson's Drift(?) looked much like that before it got an Armco barrier at trackside level.

Inside of Clay Hill but I don't think the bank is high enough?

Bringing up again the topic of the Bugatti with the lost rear wheel which reportedly shows Fothringham (btw, often written Fotheringham, which one is correct?).

These mystery photos puzzle me since years, as I always was convinced it's indeed a T54, because of the rear suspension. However, I actually changed my mind, it's for sure no T54, shape of frame is different, brakes are too small, and the typical oil filler on the bonnet is missing. I also had the 2 events in mind which had been posted here, but both do not fit. The Brooklands BRDC 500 on 22.9.1934 was the only occasion where Fothringham was entered as driver (by Kaye Don) for 54203, but Oliver Bertram retired the car with a broken gear lever before Fothringham had a chance to take over the wheel. Brooklands BARC Meeting on 16.3.1935, Manby-Colegrave had bought 54203 from Don and entered it for Dudley Froy, but the car was freshly painted in silver and carried r/n 1.  Reportedly the rear axle broke at the start, and the wheel fell off. Looks promising, but in that case the whole wheel assembly would have been missing, including brake, whereas on the photo only rim and tyre disappeared.

Obviously front and also rear suspension are not original anymore, seems that the rear springs had been changed from inside to outside the bodywork. 4896 was painted green, which would fit to the photos. I agree that the Trossi Duesenberg which can be spotted on one of the photos only appeared at Brooklands in 1934, so any earlier identification is out of question. As 4896 was sold to Ralph Vickers around May 1935 we can limit the period to March 1934 up to April 1935, under the condition of course the photos show indeed Fothringham.

The Bugatti looks indeed as our mystery car, however, I cannot find Fothringham racing at the BARC opening meeting on 16.3.1935.

Okay, the reason I left this forum years ago already is the photo topic. Correct decision.....

The car is now owned by Julian Majzub.