Having no knowledge of football to speak of, but a somewhat muddled memory of something to do with Felice Nazzaro and football, and now you say Italy, so I say...

Hah!! I googled it, and I was half right - it was Biagio Nazzaro!!!

Yes, for some reason the death of Biagio Nazzaro really struck a chord in northern Italy, there were lots of things named after him, including a football club founded the year he died.  I assume his bike racing was pretty high profile given his GP career has to go down as the joint least successful ever...

(If I can sneak in a quick one)

Who, what, where and when? 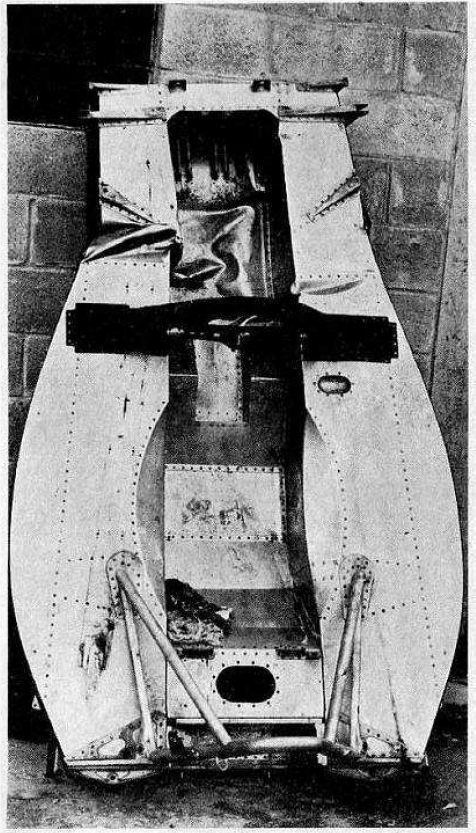 Do you, or anybody, have further details?

Since this is supposed to be a quickie, I reveal the arcane without further ado.

Jarier, Argentina, 1974. A proper introduction to the team by godasso…

I take it that photo was only published on Autosprint and not on the UK press.

One could recognize Southgate's monocoques among a thousand others, always the same configuration, from the BRMs until even the first Arrows when ground effect required narrow chassis.

One could also say that chassis was properly buckled in an Eulerian way. LOL

PS: Please proceed with further questions, either Ferner, LittleChris or who's got one ready. Cheers.

I can slip this one in

I suspect that this one may be fairly easy, knowing the depths of knowledge that pervades TNF !

Messed up the photo link so having another go

I suspect that this one may be fairly easy, knowing the depths of knowledge that pervades TNF ! 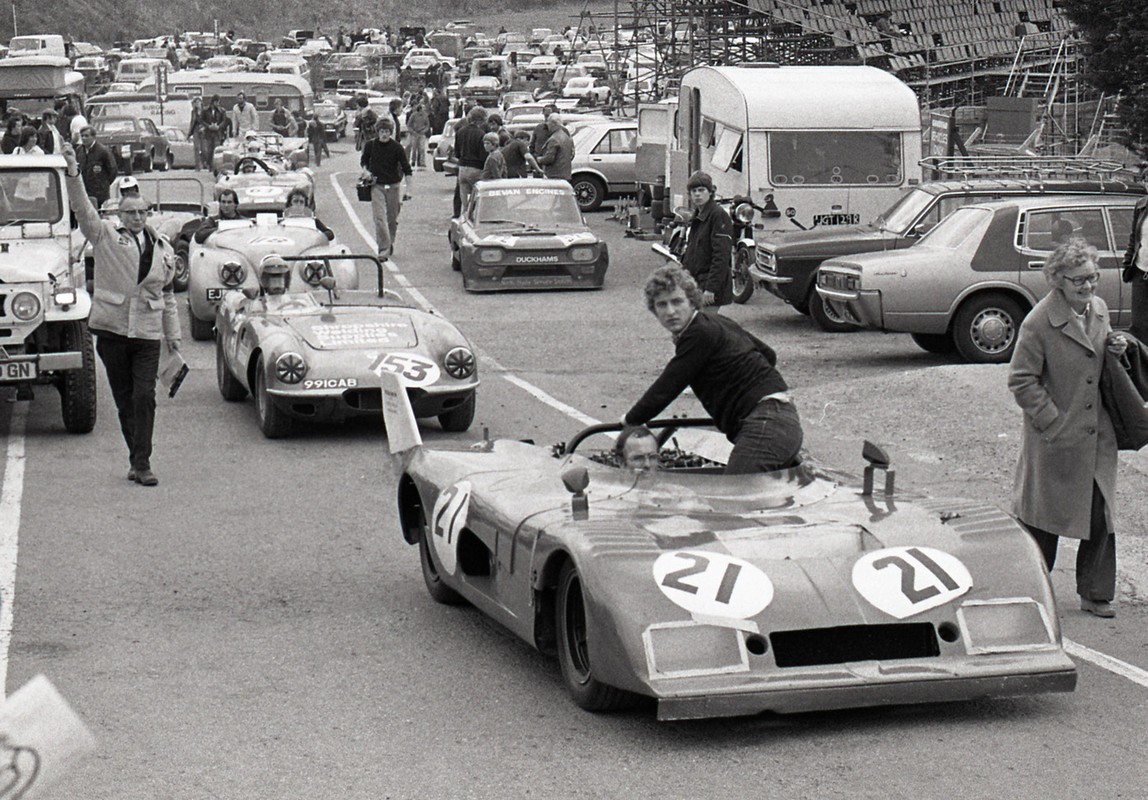 I have no idea where this is coming from in my memory, but somebody called Anthony Taylor and Blackburn, Lancashire?  And, yes, it is obviously Brands.  What it is, I have no idea.  Was there a Kincraft sportscar?!

Yes this is the Kincraft Sports Chevrolet 5.5 litre with, I presume Anthony Taylor in the driving seat. Brands Hatch 22 Oct 1978.

Told you it would be easy

Ken Heywood’s Elva Courier behind it.

Wow.  Goodness me.  But who designed and built it?

Is that a help?

Thought I would have another go at this.

I guess it could be a Cooper Maserati variant and I seem to remember that Arnold Glass drove one but I am not up to speed on Australian events in that era. 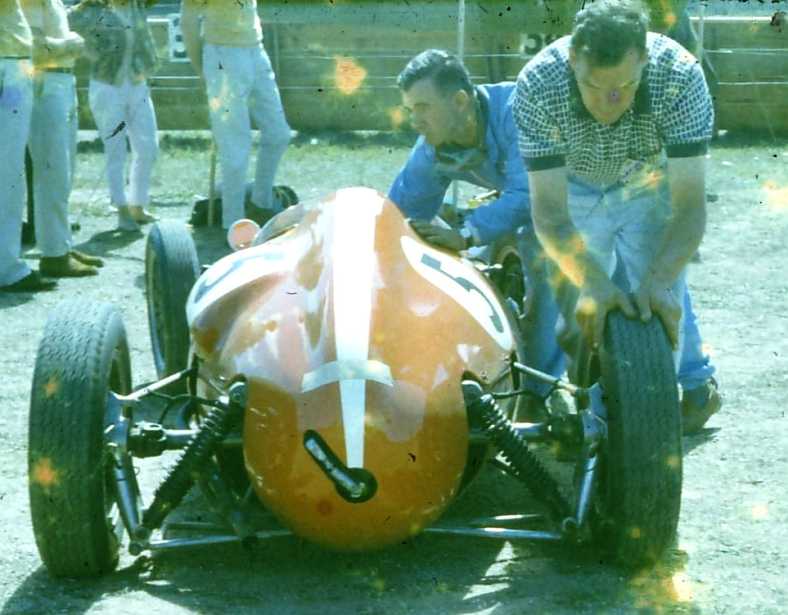 Ken Heywood’s Elva Courier behind it.

And behind that appears to be an XK120?

I associate such a beast in ModSports with John 'Plastic' Pearson... but 1978 seems to be much too late. And this one looks to be running in a nominally road-legal state with reg plates (and LHD too?).

No mention of the Kincraft or any XKs in either the event preview or the race reports in Motoring News. The Kincraft does appear (uncaptioned) in the background of a photo of Mike Harrison spinning his Elva 8S-Rover. The event seems to have been half-and-half historic and modern races.

I think someone identified the car as maybe an Ausper...

I will make a call to the photographer and ask him if that's right. I don't actually know the answer, but I can check any answers against the lap time cards for drivers and pick it that way if someone names a driver.

Who was racing it at that time, John?

Going back to the Brands photo Ken Heywood competed in the Thoroughbred Sportscar series in the late seventies. This series catered for the type of cars used in the Marque Sportscar races at Goodwood up to the mid sixties. I can remember Jaguar XKs, Aston Martin DB4s, TR2/3s etc competing although in later years cars built up to 1975 were allowed in.

Martin Crowther in the XK?

Going back to the Brands photo just to clarify. This was at the 22nd October1978 historic meeting.

# 21 is the Kincraft Sports - this is listed in the programme as having a 5.5 litre Chevrolet entered by Autotune Ltd, Blackburn and driven by Anthony Taylor.  The car also made an appearance at the 21 May 1978  Brands historic meeting where it is listed as having a 5.9 litre fitted (does'nt say if it is a Chevy or not). Also shows the car being red and manufactured in 1966.

#153 is the Elva Courier Mk1 of Ken Heywood. This is listed as #53 in the programme in event 3 (Oldham & Crowther Thoroughbred race) but probably due to lack of entires event 3 was combined with event 1 which accounts for the odd mixture of cars.

Behind the Elva is car #118 which is the Jag XK120 of Peter Sugden. On the right is a Hillman Bevan Imp which according to my programme change, was driven by Bill McGovern (this was in a different race !)

Here is another view of the Kincraft. I don't know whether the tail fins are just that or if there was meant to be a wing fitted. Certainly as a 1966 car it would probably not have had a wing but it might have been a retro fit.

Car #63 is the Lotus 23B of JeffreyJohnstone.  The race was won by Malcolm Clube in his McLaren M1C by the way. Just scanning down the entry there are some well remembered names for this race - Rodney Bloor, Bruce Halford, Tony Godwin, Martin Colvill, Vin Malkie, Stephen Griswold, Simon Phillips among others.   Happy days.

Time to revive this thread now that many of us have time on our hands?

The Champions in those years also won their first F1 WC race in the same year.
( the correct title was not the F1 World Drivers Championship, though I know what you refer to)

The Champions in those years also won their first F1 WC race in the same year.
( the correct title was not the F1 World Drivers Championship, though I know what you refer to) 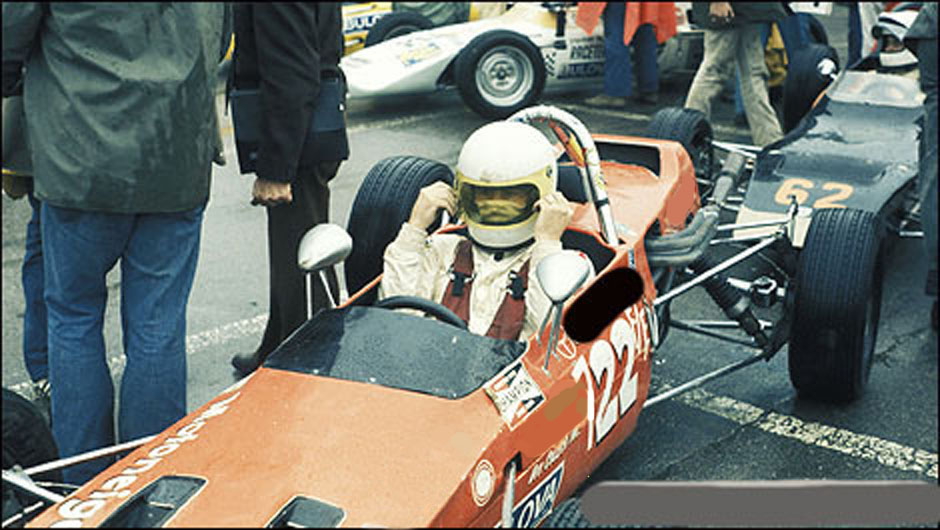 Who is this well known racer in his inaugural season? Also time and place which will easily follow.

Gilles Villeneuve? No idea on time and place...

Gilles Villeneuve? No idea on time and place...

Good work, it is Gilles. Since I am not clear on the place I will rely on others who might know. It is 1973 and the FF is a Magnum built by J P St-Jacques. The photo by Lucie St-Jacques does not identify the circuit. Gilles did race at the Canadian Grand Prix at Mosport with #722, I think that is the place. Anyone know more?

What was used for the final time in a Formula one World Championship race in 1967 and in a non-championship Formula 1/Formula 5000 race in 1971?

Must admit though I don't know the answer.

(At a guess, German GP and International Trophy?)

(At a guess, German GP and International Trophy?)

Correct Tony, over to you!