I am keen to find out what thread was used on the rod bolts of the Daimler 2.5-litre V8 engine...

I would expect they were 3/8" UNF, but they could be anything I guess.

Surely it would be more likely to be BSF?

Surely it would be more likely to be BSF?

Maybe too recent to be BSF? Some of the Jag engine rebuilders do Daimler pushrod engines - maybe give one a call?

Maybe too recent to be BSF? Some of the Jag engine rebuilders do Daimler pushrod engines - maybe give one a call?

I believe most post WWII British cars use UNC/UNF.

I believe most post WWII British cars use UNC/UNF.

They do - but there is often odd exceptions - like the mid-60s Minis. The were mostly UNF/UNC but the tappet adjusting screws and locknuts were BSF.

UK factories made American National Standard screws during WWII but everyone welcomed Unified threads from 1949. Somewhere I have the British Standards Institute spec book for the Unified thread, published shortly before the UK adopted Metric standards....


The Gypsy series of aero engines (surely the most Pommie of all 'plane engines) had metric threads - but imperial hexagon heads to suit the common spanners in use at the time
. The Morris 8 of the '30s was similar.

The SP250 had UNC/UNF threads - I had to buy the taps & dies and a set of A/F spanners when I got my first one. What's more the big-ends used twelve-point nuts (and possibly bolts but I can't remember).

Metric threads with BSW hexagons was a Morris Engines characteristic, as the works was originally Hotchkiss, so French. I should have known about the DH Gipsy and if that's right it probably goes back to the origins in war-surplus Renault engines.

Well, the need for me to know this has now disappeared, but it's good to see I started a small tangential disucssion...

Peugeot for many years used UNF threaded tube nuts on their braking systems, these having metric hexes of course.

I'm sure there are further mix-ups in this crazy automotive world, I'll probably think of another later.

I asked the David Manor Group (UK Daimler specialists) about the rod bolt threads - they said in reply:-

The automotive, which includes piston aircraft engines has always been a hotch potch of threads and weird bolts. As described by others imperial threads with metric heads and vice versa. Many 70 on engines were predominantly one or the other in all the main engine bolts then accesory bolts were different.

Though some English vehicles were both BSW and UNC. And Euro stuff built UNC UNF with metric heads.

Though my guess is that those Daimler engines would have been imperial. Though imperial can be weird as well 5/32 rod bolts are fairly common in English, Australian and US engines.

Brakes and suspension can be a pain as well, and aftermarket parts, eg wheel cylinder bleeders some are imperial some are metric and some cylinders are not bored eg 7/8 but the metric  22mm equivilant. Not ideal!

TC TD Cortina 6 [and 4 too I think] use metric one end of the front shock and imperial the other. Though they also originally had odd valved rear shocks as well. Those cars though are an English Euro Aussie abortion. And need a full compliment of imperial, metric and whitworth tools.

Interestingly the Aussie, Jap and US  metric built vehicles  use some odd metric spanners, 15 &18mm are not uncommon for Euro vehicles where the rest never use them, eg 12mm bolt Euro uses 18mm spanner where the rest are 19 or 17. Weird.

until I came across these vehicles 1 15mm spanner was a tight 3/8W !

The only things I have ever seen an 18mm spanner fit were rear caliper bolts for a Nissan Skyline and wheel nuts on a Mini (and other A-series). I can't remember the one automotive application I have seen for a 15mm spanner, but they do fit front axle nuts on bicycles.

The only things I have ever seen an 18mm spanner fit were rear caliper bolts for a Nissan Skyline and wheel nuts on a Mini (and other A-series).

It is a long time ago but I seem to recall all my minis having 17mm wheel nuts.

When I replaced a piston on my 2.5 Daimler, my recollection  is that they are 3/8 UNF. However this engine had been modified so to say these are the original factory fitting I can't say. My factory Daimler manual depicts the nuts as 6 point nuts not 12 point but does not specify the size. The torque recommendation is 25-30 ft lb. 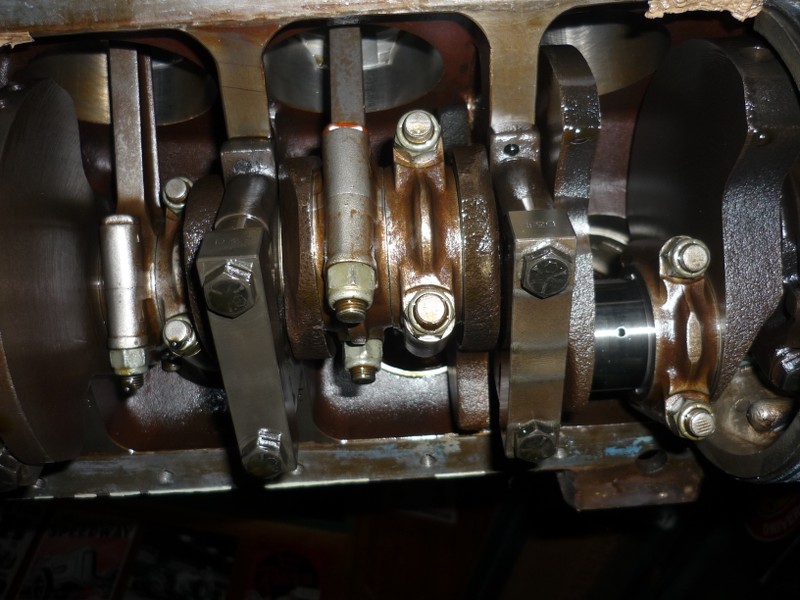 I thought you should know.

They ran out of split pins?

Surely correct torque is a function of the material quality and the thread pitch of the bolt. So size alone is not a good way to judge a picture on the internet. What i would wonder the most about is the backside of the bolts. Does the bolts have teeth? Do you trust the torque all by itself to be sufficient lock?