I wasn't aware that the white and blue livery for the 1990 season basically was designed because of Rothmans becoming main sponsor of the team.
Unfortunally the deal came to nothing, but the team decided to keep the livery because it looked better than the plain blue car the year before. 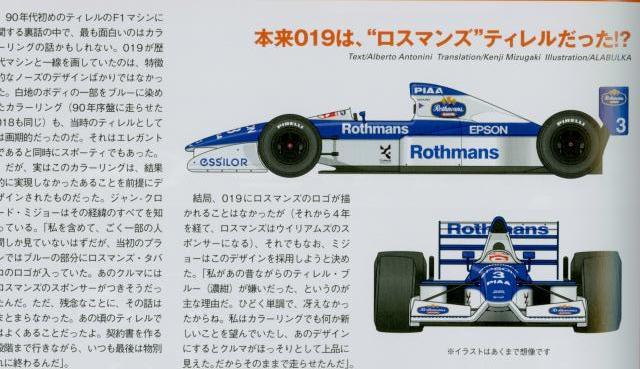 I got this from a Japanese F1 magazine, I wish someone can translate this for us.

if you look at Tyrrell's transporter for the 1990 season, it seems to be waiting for the Rothmans stickers to be put on. 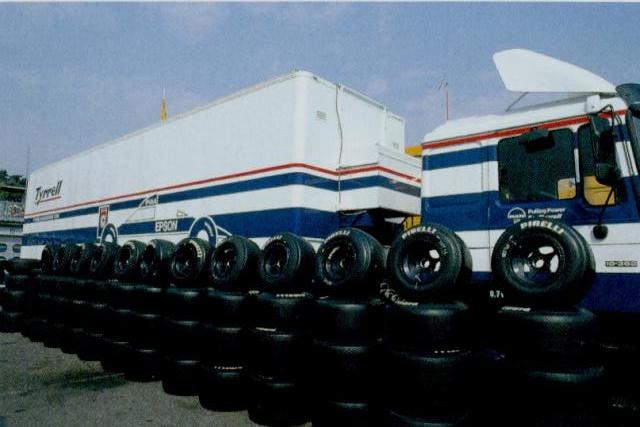 The text in the extract from the Japanese magazine is itself translated from an article by Alberto Antonini, according to the line under the headline - so I just Googled "Alberto Antonini Tyrrell 019" ...

Such a shame, the Rothmans money would have helped them to develop their car more, I was always a fan of independent midfield teams like Tyrrell, Arrows, Ligier

I for sure never knew about this

There is a photograph of the car painted up with the Rothmans badging.

This may be the photograph mentioned by f1steveuk

It's a Tyrrell 018 in front of the teams workshop at Long Reach, Ockham.
Although you can't be 100% sure due to photoshop etc.

I admit I was sceptical when I first read this, the livery on the car as raced didn't convince me but the picture of the truck with the gold striping around the blue is very convincing.  Uncle Ken may have been naive to think he could have secured such an iconic sponsor whilst swimming in the 'pirhanna cllub?'

It's not that outlandish a thought; Rothmans' previous title sponsorship in F1 was for March in 1982, a season in which a then-record 26 drivers scored points - and none of them were in Marches.

It's a real picture.

The livery we used in 1990 was decided by Ron Dennis. He came to Ockham to check it.

Ron Dennis?  Did Ken like his OCD-esque attention to detail?

Thank you Nigel for confirming.
I'd hoped to get some additional information when starting the topic from former team members like you.

Seems that Ron Dennis was involved already in late 1989, did the discussions for taking the Honda/Mugen V10 engine start at the same time?

Ron Dennis was helping the Tyrrell team in securing sponsorship in the 90/91 time when they were sharing the Honda engine.  I suspect this was because McLaren couldn't take all the sponsors knocking on their door.  In 1991, you see the Tyrrell car was full of sponsors for once.  But this partnership ended soon afterward.

Ron Dennis?  Did Ken like his OCD-esque attention to detail?

If I recall correctly, McLaren undertook some of the marketing/commercial tasks of Tyrrell at that particular time. (I'm assuming that McLaren took a cut of sponsorship revenue raised).

Thank you Nigel for confirming.
I'd hoped to get some additional information when starting the topic from former team members like you.

Seems that Ron Dennis was involved already in late 1989, did the discussions for taking the Honda/Mugen V10 engine start at the same time?

Yes, we were in Japan for the race in 1989. My hotel room mate was Roger Hill. Ken called Roger, and after he hung up Roger said "Nakajima for next year and Honda engines for the year after". Simple as that.

Yes, there was a deal for McLaren Marketing to source sponsorship for 1991. My understanding was that they guaranteed a certain amount, and took a slice of anything found over and above that amount.

Ron came to Ockham and personally applied the silver tape which marked the border between the blue and the white paint on the first 018 that was painted for 1990.

This is just great info, thank you so much Nigel

Have you thought of writing a book about your time working inside F1??

Weirdly though you would think if Ron was involved it would be a Philip Morris brand, not an RJ Reynolds one, it was them wasn't it?

Or was that Camel.

So they went from part Camel sponsorship with Alesi in 89 to this in 1990.  I think the car looks great, but Rothmans were heavily into bike racing in 1990 with Honda in two classes, so the tie in is clear.  Also obviously the tie in with Nakajima, Honda and a fag company.

Well if Ron applied the silver tape, we can 100% certain it was dead straight and in the middle!!!

Weirdly though you would think if Ron was involved it would be a Philip Morris brand, not an RJ Reynolds one


Or a stillborn RJ Reynolds one.

Not sure they ever were.  Part of British American Tobacco (BAT) as far as I know.   Fascinating thread by the way

Stillborn sponsorship! Not stillborn brand. Who In their righ mind would let a person from a rival team to arrange sponsorship. I guess only the person who would put 6 wheels on a race car