57 replies to this topic

I never imagined that attending four days of motor racing could be so exhausting, or maybe it is just my years reminding me of my years....

I just remembered that I haven't written up the Saturday, never mind race day.

So to get to the Baron Trenck this time, Dah-veed picked us up in his monster merc - actually I think it was a Maybach, it was so swimming in luxury - and whisked us around the back of Monte Carlo to the port of Fontevielle. I don't know how many of you have been there, but it is truly spectacular with limestone cliffs dropping sheer down into the limpid waters of this small harbour. There we were greeted by this hugely black and sinister rib which had at least four big engines on the back. The wind and sea had got up, and it was wild rollercoaster ride once the driver lit the wick, until we reached the calm of the main harbour. We motored past these amazingly large yachts, some with helicopters perched on the aft decks and eventually we glided up to the stern of the Baron in a damp and dishevelled condition. But nothing that a second breakfast served on the flydeck in the brilliant morning sun couldn't put right.

But then I looked around, and a shadow fell across my high spirits.

We were in the row of yachts parked stern-to along the straight after the tunnel and chicane, and the yachts were moored perhaps 10 meters out from the quay, in a beautiful straight line. But the thing is, the Baron's aft decks were not aft enough, and the yachts alongside us were blocking the views to left and right. For the entire day, my head was spinning from side to side to watch cars flashing by, across an 80 meter stretch of straight. Bloody useless for photography. So I was grumpy. It was a shitload of money to spend in order to watch 80 meters of track!

And get this: the yacht to the right of us, blocking our view of the chicane, the people on board weren't even watching the cars.It was wall-to-wall bimboes and exceedingly elderly (well my age I suppose) gents, bronzed like walnuts and indeed with the entire appearance of walnuts. They spent  the entire day sunbathing, swilling bubbly, stroking each other's parts - and blocking our bloody view!

Anyhow, Mrs E was on very good form, the Baron was well stocked with the necessary victuals, and she was not going to allow me to be grumpy for too long. And indeed I gathered myself together, concentrated on the big screen that was perfectly positioned, and inhaled the vibrations of the racing cars as they whooshed and roared past me in a blur. I couldn't use my newly-acquired F1 app, because of the sunlight on the mobile screen. In between sessions lunch was served, and very excellent it was too, and Sebastien the barman was ensuring that noone had an empty glass.

Mrs E made some new friends. A Canadian couple that were looking lost and hostile, until she accosted them and drew them out of their shyness whereupon they turned into party animals and very good company indeed. Big property developers in Victoria, and when  the day ended we made heartfelt promises to each other that we would visit them in Canada, and they would come to us in Cairo. And then there were two Finns we had met at the F1 legends and yacht bash the night before: Mrs E and Ingrid have been inseparable, and it seems we are going to stay in their lakeside cabin somewhere in Finland a little later in the year. When a sauna was promised, Mrs E said "not naked, I hope!!". Ingrid replied "of course not, it is only those Swedes that make you go naked". At which point I nodded sagely and contributed "yes, and beat each other with birch canes afterwards. Perverts."

A group of insanely rich and very sophisticated Indians, one of whom seems to own all of Goa, and his terribly English supermodel fiancée. When her eyes lit on Mrs E's textile jewellery she got very excited, as did her future spouse; who took all our contact details and has promised us a big business proposition. We await eagerly.

I cannot tell you much about the racing and qualifying: it went by in a blur. And I have a stiff neck to prove it.

But afterwards, when we were all a little ready for our siestas, we were informed that the track would not open until 8.30pm, and therefore our cars could not collect us until then. And in the meantime the bar on the Baron was closing. Mrs E was not at all amused, and was on the verge of a major wobbly. But then the Baron's captain whistled up the yacht's own tender, and Dear Mrs E had to descend a wildly swaying ladder off the bow - a big drop - into the waiting arms of a very handsome and swarthy Italian bosun. Shame really, she had her eyes screwed so tightly shut, she didn't appreciate the moment.

So we made it back to the Meridien, decided to have a little siesta before going out somewhere insanely expensive for dinner. And we didn't wake up until Race Day! So that saved me something in the region of €400.....

If ever you get tired of running the factory - then write a book :-)

We keep telling him that.

Eastern: Always a pleasure to read your stories.

However. We got to try out a selection of stands, and I think we ended up liking K1 the best: you could see the cars coming down from the tunnel, the chicane and then a huge burst of speed down the straight into the left-hander to the piscine.

As a bit of context, this is the view from K2 (the stand, not the mountain) at the Historique two weeks ago.  K1 is the grandstand in view at the bottom. 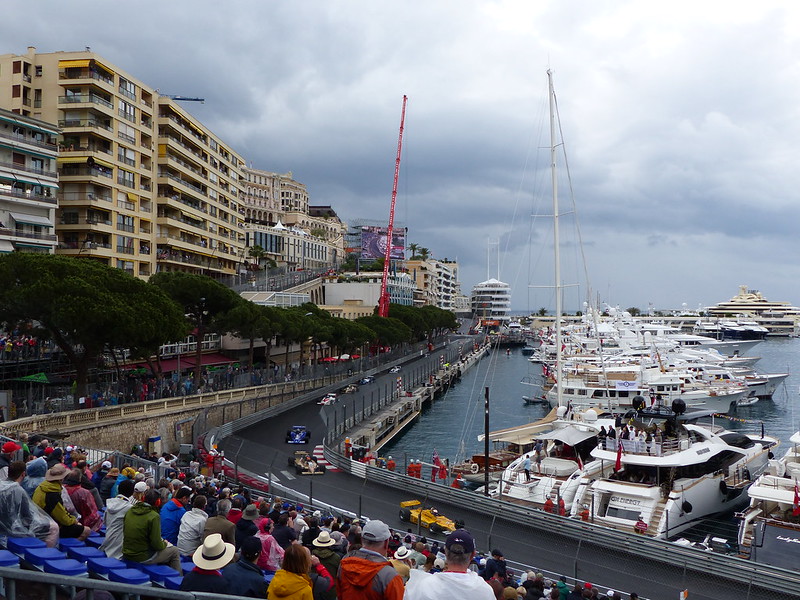 The very best place is in the top row.  You can see the cars coming at you without the catch fencing, and, if you turn around, you can see them going through Ste Devote and going up Beau Rivage... 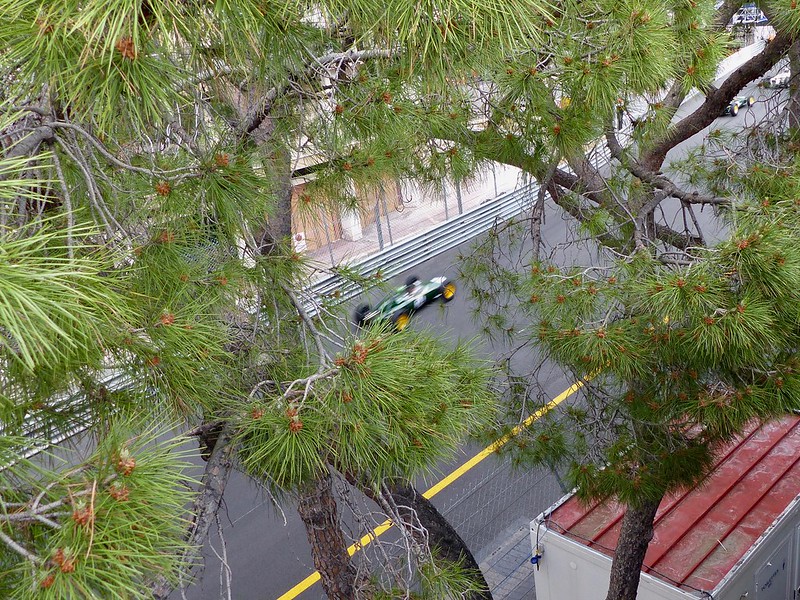 Certainly trying to get around with all the roads closed is labyrinthine in the extreme.  But in the evenings they open up the circuit and you can tread the hallowed tarmac.  (At least at the Historique.) 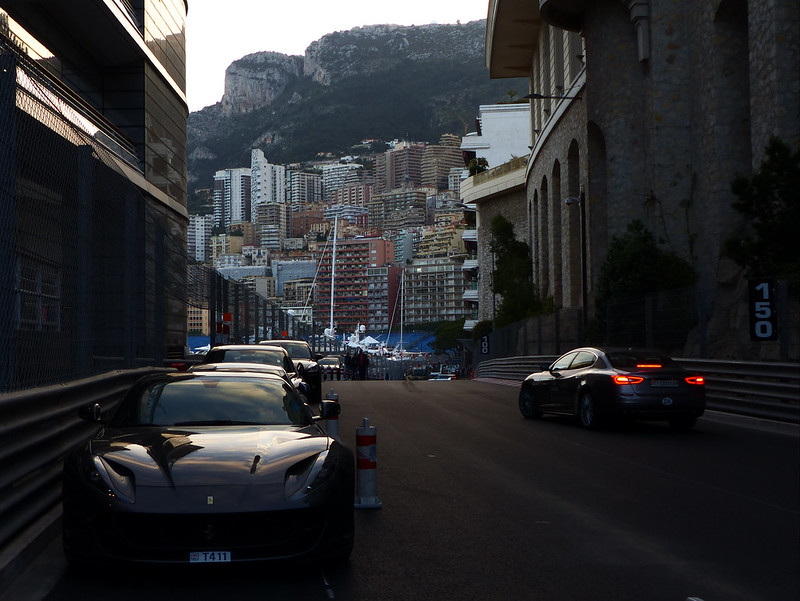 ^ coming out of the tunnel; the cars are outside the Yacht Club, waiting for the valet parking.

I was thinking about going to the GP itself, but, you know, with all those Beautiful People there.  I thought they might get upset at me outshining them.

The buildings around are new, they're where the "real" Monegasques live as the Monte Carlo and Monaco-ville bits are so eye-wateringly expensive.  It's also near to where the Stade Louis II is, hence me stumbling across the harbour trying to find it...

You can fit Monaco inside Central Park, but it seems much, much bigger than that.  Because its surface is nearly 3D; I'm sure there's a fractal dimension that describes it.  As Monaco rises so precipitously from the sea, it means loads of hairpinned roads cycle up it, and of course there are towerblocks alongside most of them.  I thought I'd run out of stuff to see just either side of the races, but I'd love to go back when there is no racing there, so I can enjoy things like the royal palace and Prince Rainier's car collection.

Well I just got back from treating ourselves to a sunset dinner on the roof terrace of the Plaza Hotel in Nice. Mrs E is snoring with the utmost delicacy behind me as I type this, and tomorrow we fly back to Cairo. So I may not get race day written before then, And after that I have around 1,000 ****-awful photos to sift through and post the least clumsy of them on here.

Race Day dawned with a sky like molten pewter, mirrored by a swollen and choppy Mediterranean sea. We went down for breakfast in a dining room full of scarlet mechanics and pit crew, and  - somewhat insincerely - wished them luck. This morning our trusty David was not there for us, but we were picked up by a Hungarian driver called Tomasz, excellent chap, well he is Magyar after all just like my paternal forebears, taken around all the back streets of Monte Carlo, until we were deposited at rue du Rocher, with instructions how to reach the Caravelles building. The streets were heaving with good-natured fans heading on foot to their different stands; we threaded our way through until we reached the Caravelles and after a lengthy wait for the lift found ourselves disgorged onto the flower bedecked and canopied roof.

The view was breathtaking. If you leaned sufficiently far forward over the parapet, you could see the start line and the first third of the grid, the run to Ste Devote, and then the long climb up the viaduct to Casino Square; and then we would see them burst out of the tunnel, down to the chicane, and all the way the piscine. And in between all of that, Monaco's famous harbour, filled with superyachts and an endless bustle of small tenders ferrying people about to their places before the day's racing started.....

...... well ladies and gentlemen: the above is all that I was able to recover on the autosave after the internet belched and wiped out my entire post. And I am way too tired to re-write the whole thing. So that is the end of our Monaco VIP experience

Your travelogue rocked my world Eastern.