Where can we find aero numbers for old F1 cars?

I understand it would vary depending on what stage of in-season development they were in, but I'll take anything as a start.

I doubt you will find that information, unfortunately.

Most teams keep their aero data encrypted, have sophisticated security software & have no reason to expend energy or money, releasing it.

And the information is usually not even available to team members outside the Aerodynamic Department,

There is an excellent Italian book on the subject.

Not official numbers but clever calculations based on track data.

As I thought, hard to get. I too have some ideas to gain some data from my own calculations, which I guess I'm going to have to have a go at. Perhaps the following is something like Enrico Benzing's calculations? Unfortunately I don't speak Italian.

At a start, I would get images of Monaco and Hockenheim spec downforce levels like this: 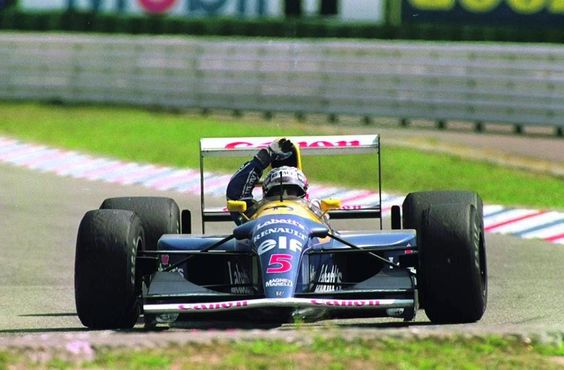 ..... and then I'd arbitrarily set the downforce levels for Monaco at 100, and Hockenheim at 1.

Then I would observe qualifying onboards for the car at key corners of each track, such as Agip at Hockenheim and Tabac at Monaco. If I can get speed graphics during those corners then great. If not, I'll have to make an audio note where the throttle was, and in what gear. Then I can make some sort of calculation of:

Maybe I will find a middle ground circuit like Barcelona to level up the data as neatly as possible.

I would then rinse and repeat for all other cars on the grid. Hopefully I should start to get some sort of pecking order of how good the cars were in any given season, at least aero wise.

Then I can start looking at other factors like car stability, engine driveability and tyres. Not sure yet, but at least I have a base to work from. Would hopefully help to differentiate who were the faster drivers too during a season too. Sometimes slow/fast drivers muddy the perception of how good the car actually was. 2007 is in dispute by many.

Well you could start off very simply by looking at max speed in a straight line versus engine power, on circuits where max power is exploited. Assuming you can find reliable data for max power, you can identify cars which have the most drag.

You will not identify any useful information based on max drag/rune signs/dandelion circles, even if you have twenty sector times for a single corner. The driver may have passed through 10 times on warm up laps. Perfect laps are extraordinary.