I am hoping that someone within the forum may be able to put me into contact with Bob and Marj Brown please.

Some time back I purchased a set of Hilborn injection mounted to a Norman supercharger. I have been hunting down the history of both units, with some interesting turns along the way. Records from Hilborn’s archives show that the injection set was originally purchased on the 25th of July 1972 by Robert Brown from Glenunga (Adelaide) South Australia. Over time I have spoken to a few people, and from what they remember have been able to piece together the story below.

Bob started in business in Adelaide as a ticket writer, providing signs for department stores and land agents. After whitegoods manufacturer, Simpson, asked him to print decorative patterns on toughened glass stove fittings, Bob closed the signwriting business and concentrated upon supplying toughened glass to Simpson. Bob sold the business to a subsidiary of the glass-makers, Pilkington-ACL. The business now operates as Pilkington Seraphic at 776 Port Road in Beverly, South Australia. Bob rose from early retirement to establish Thermax, a business in Britain to provide decorative ceramic glass to cooker manufacturers and toughened glass panels to the automotive business in the United Kingdom and Europe. In the mid-1980’s Bob once again sold a thriving business to retire.

Bob was no stranger to racing, with the Bob and Marj Brown team owning two Thermax Birranas, driven by Tony Alcock and Bob Muir in Formula Atlantic. Muir would take one of the Brown’s Birranas to 2nd place in the 1974 Australian Formula 2 Championship. I have photos of Muir in the Brown’s Birrana 273 Ford '009' at Symmons Plains in September 1974, and at Mallory Park during the  British F Atlantic Championship, Bank Holiday meeting in August 1975. I understand that Enno Busselman also drove the Brown’s Birranas, taking second palce in the 1973 Australian Formula 2 Championship. Bob and Marj Brown took two 1973 Birrana 273s, Alcock and Muir to England to race in the 1975 Formula Atlantic. An airplane accident would kill Alcock, along a number of other names in Formula racing. Bob and Marj also competed in the European Formula 2 Championship (in different vehicles) with Muir driving.

I suspect that the injection set however has led it’s life on the dirt rather than tarmac racing. Bob owned two speedcars. The first of the speedcars was the Rowe/Wigzell #2 WonderCar (driven for Brown by Joe Braendler, who had recently sold his Holden) and a SESCO powered speedcar driven for Brown by Colin Hennig and originally built by Ted Bohlander. Both of Brown’s cars were painted a lime green colour and were numbered #25 and #26. When the Rowe/Wigzell #2 WonderCar was purchased by Brown, it was running multiple carburettors. Brown purchased and fitted injectors, casting up aluminium manifolds to suit. Given the WonderCar’s Peugeot powerplant, and the fact that Brown specified a Peugot engine in his original order to Hilborn, it is possible that the injection used on the WonderCar is the injection set that I now own. The #2 WonderCar went from Brown to Anderson who blew up the Pug engine. It then went to Ron Gates (sans motor) who fitted a Datsun motor. It was later sold to Mitchell.

After Brown’s ownership, the injection set’s whereabouts are uncertain until it was next known to be used on a Mitsubishi engine speedcar (SA#75) that was built by Rex Hodgson. In this format it was paired with a 300 Norman supercharger and a Mitsubishi Sirius 4G62T engine. When owned by Hodgson the #75 car was running an 80ci/rev Magnusson supercharger and the injection unit. It is believed that the Magnusson supercharger and injection were purchased as a unit from the United States, implying that the Norman supercharger and Brown’s injection were fitted by a later owner. Hodgson ran the Mitsubishi engine for only eight to ten meetings around 1985-87, as the supercharger had the tendency to melt drive belts. The car was then sold to Don Cave (from Highlander Crash Repairs in Holden Hill, South Australia), who jointly owned the unit with Colin Hennig. The car was driven by Steve Hennig and Ron Gates, with Gates driving in the early 90’s. The car was renumbered as SA#2 (the old WonderCar number) at this stage, after Rowe was contacted to relinquish the unused number. The car appears to have been still running the Magnusson at this time, as Gates remembers gears inside (the snout ended up being broken on the supercharger in any case). During this period the injection set was drilled in the middle throttle body, and an extra nozzle fitted to try to remove a top-end power issue (later found to be an electrical fault). The car had significant issues in running reliably. The Cave/Hennig partnership ended, with Cave retaining the car. The car was purchased by Max Monk (driven by Snowy White at Speedway City for a couple of runs) and subsequently sold to Rob Gilbert.

All up it has been an interesting journey piecing the puzzle together. I'm a bit wary though, as the story is a bit of a patchwork quilt - brought together from lots of different places. I would really like to talk to Bob and Marj to check the content. Until now I was not able to find any contact details for Bob and Marj, though a recent FaceBook posting from a third party suggests they are still alive and well. If anyone has contact details for Bob and Marj, I would really appreciate them.

The s/c Pug was rebuilt about 20 years ago and should have all its parts. My memory is blank on who restored it but it was done properly. Ian Gear owns the car currently.

I know of the Browns but do not know them. I feel Bob has died? I am very happy if he has not!

The Hennigs are both dead. As is Alec Rowe and Snowy White. And Braendler. Max Monk is in Murray Bridge

The Bohlander car is restored as it was with Chevy2, not Sesco. Changed hands recently, went to Vic I feel. I know the last owner Rob Smith and can find out.

I can not remember Rex Hodgson with a Blower on that Mitsi? Never very quick or reliable.

I too hope that Bob is still with us.

I spoke to both Hodgson and Gates about the Mitsi, so relatively comfortable that bit of the story is right (or as right as several decades of memory can be).

The Wondercar was restored in 1994 by Peter Demack in Pug format. It has gone through a hell of a lot of changes in it's time (it was originally Ford Consul, and had a rotary for a while after the Pug motor grenaded) so hard to define what the right bits are for it. I'm hoping that the injection set I now own spent some time on it, but will be hard to confirm without Bob and Marj's help.

By coincidence, Mark Bisset just sent me a pic of the Birrana S74... 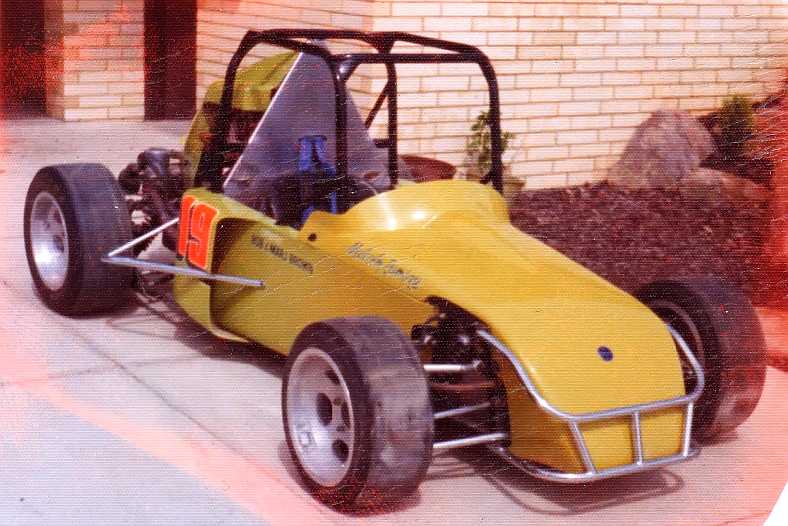 Can confirm that Bob and Marj are both still with us.

I too hope that Bob is still with us.

I spoke to both Hodgson and Gates about the Mitsi, so relatively comfortable that bit of the story is right (or as right as several decades of memory can be).

The Wondercar was restored in 1994 by Peter Demack in Pug format. It has gone through a hell of a lot of changes in it's time (it was originally Ford Consul, and had a rotary for a while after the Pug motor grenaded) so hard to define what the right bits are for it. I'm hoping that the injection set I now own spent some time on it, but will be hard to confirm without Bob and Marj's help.

Peter Demack! That is who I could not remember.

Did that car or the one after have the rotary? I feel it was the car after that started with Renault power. From vague memories I feel probably Three from Alec Rowe. The last one started with a rotary in the late 80s and was driven by Steve Stewart. And I feel Peter Maltby as well.

The first car was Consul then Pug powered. The next one I feel went to Fishers [and Cec Eichler] with the Renault with Bill still driving it. an then later Graeme Cowland.