And for the first time, starringthe likes of de Angelis, Gibernau, de Puniet, Terol and one of those chaps called Smith

I guess Bradley must be favourite for the MotoE championship, assuming the bikes are more or less equal.

Not sure if the races are being run on the Saturday or Sunday? Hopefully they will be televised, as although i'm not sure I would follow it closely, i'll certainly watch it to begin with.

Just seen that Moto 2 and Moto 3 qualifying will now mirror Moto GP, having both Q1 and Q2 sessions. Not sure I see that as a good move, but I guess we will get used to it quickly enough.

Can't wait already. I'm hoping, hoping, hoping that somebody steps up to take the fight season-long to Marquez, and for me that'd either be Maverick Vinales, Alex Rins or Jorge Lorenzo. Dovizioso has had his chance. He's done a Vettel the last two years. Petrucci isn't a world beater either so even if Ducati come up with what's probably the best bike again, it's not going to give Marquez too much bother. It's a shame. So move on, over to you Suzuki and Yamaha.

On Lorenzo.....initially when this move was announced I thought "Max Biaggi 2005" (went to Repsol and was sh*te) but the more I think about it the more I think I'm underestimating his talent. So he struggled on the Ducati, fine - but when they got it right for him, he bloody flew. And on the Yamaha, even in the Marquez domination era, you always knew that if Lorenzo was on form, got pole and got out front early on, nobody was going to get close to him. He's got a shot here if he likes the bike.

Also can't wait to see how Morbidelli does on the new Yamaha, which supposedly will be factory spec? Franco was great last year wasn't he, especially as MarcVDS imploded around him. This has the look of a real step up for him doesn't it? I wasn't massively sold on Morbidelli in Moto2, even as he eon the title I had reservations about him. But he did extremely well.

I'm hoping for a big improvement from KTM as well. Needs to be.

I guess Bradley must be favourite for the MotoE championship, assuming the bikes are more or less equal.

Not sure if the races are being run on the Saturday or Sunday? Hopefully they will be televised, as although i'm not sure I would follow it closely, i'll certainly watch it to begin with.

Sundays I think, mate, I shall be supporting Sete Gibernau.

Some decent riders in the field, obviously the issue is that guys like de Angelis and de Puniet are now quite a long time out from their best performances, whilst Smith should be well in his prime period. But I think making any predictions is setting myself up for disaster at this stage.

Very curious to see how Lorenzo goes up against Marquez. I also expected a stronger Rossi challenge.

Lorenzo’s progress on the Honda is what I’m most eager to see, the bike seems to be a better fit for him than I was expecting when it was first announced. Ducati have the best bike but will it be enough against Honda and Yamahas riders?

If the British weather behaves like itself then the race will be damp and drizzly, and Silverstone's unique wind will go straight up your trouser legs.

I want Repsol Honda to go back to this menacing look with the black horns! 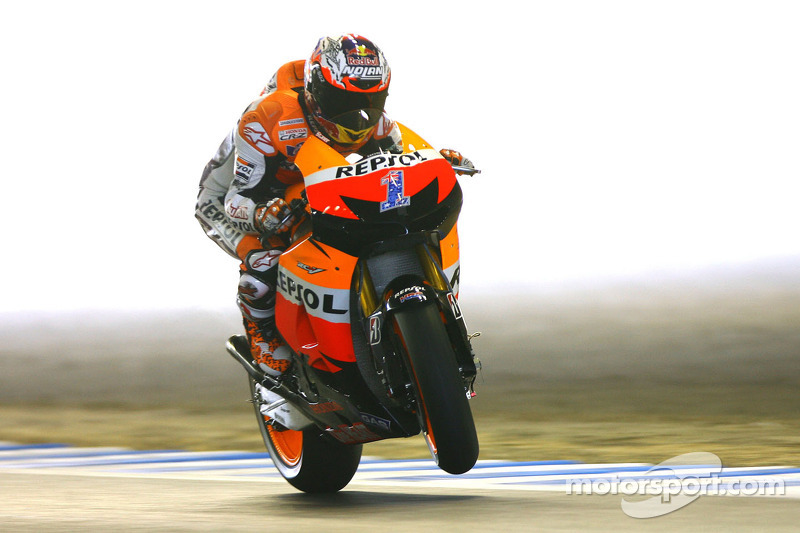 Between Paco Bagnaia and Joan Mir - which rookie is going to have a better season?  I think it will be Mir.  While he is a factory rider, he doesn't have the pressure that being a VR46 academy rider brings with it.  And the Suzuki looked savage to finish 2018.  I hope Rins is a genuine title threat this year.  If so, expect Mir to be the rookie of the year.

I want Repsol Honda to go back to this menacing look with the black horns!

The orange red and black (or is it very, very dark navy) Repsol Honda livery up to 2013 is probably my favourite MotoGP livery of all time, although rivalled by the West Honda Pons and Camel ones. It's nothing like as good since they revised it to orange red and white.

Mine too, they should have definitely kept the black. The navy blue I think was on their overalls? I liked that better too. 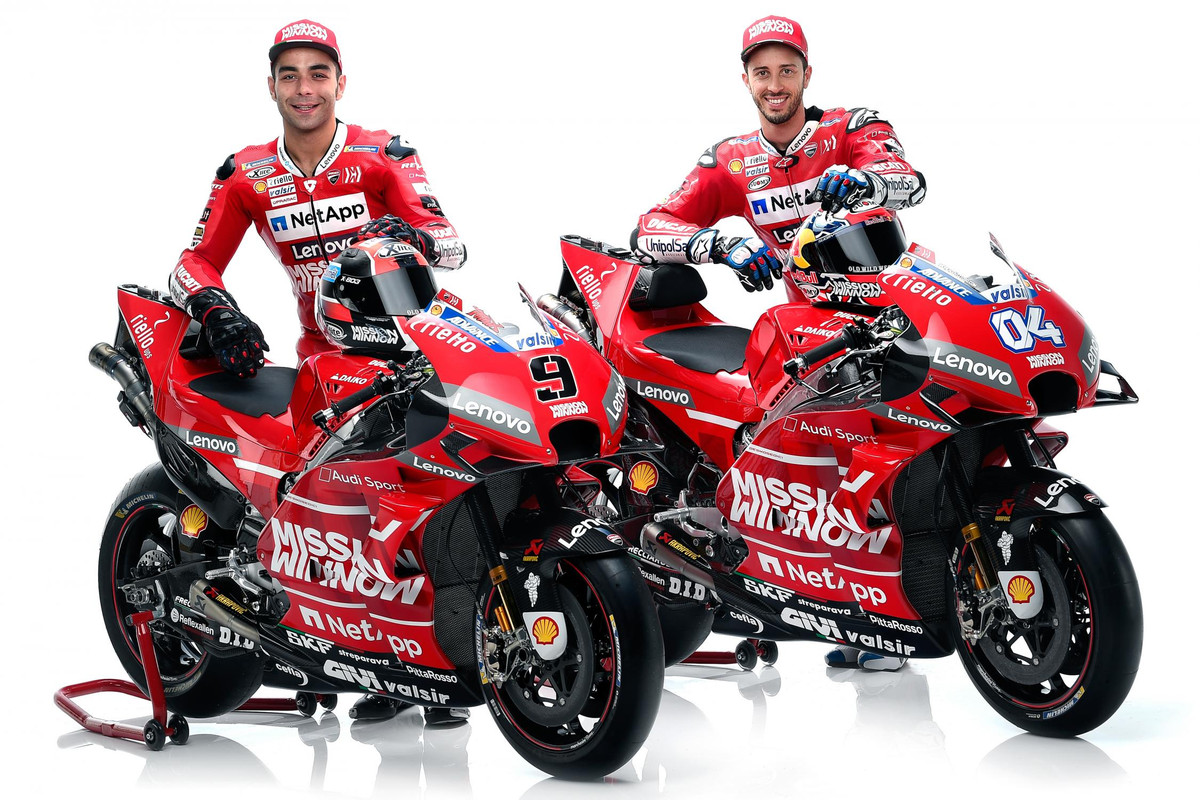 So while front wings have become banned, Ducati goes and has two sets of them...

When I squint my eyes I still see Marlboro. The GP8 with Marlboro livery is the most beautiful bike I have ever seen. Also shame on MotoGp for not getting rid of wings.

So while front wings have become banned, Ducati goes and has two sets of them...

I think this is last year's bike

Annnd Lorenzo is injured again jeez! I hope it isn’t going to be a long recovery, scaphoid fractures are not normally that straight forward. :/

Yup, that ain't gonna help him take on Marquez at Losail, is it.

I see your point but lets not forget JL99 is one of the greatest motorcycle racers of all time.  He knows what he is doing and will adapt.

I see your point but lets not forget JL99 is one of the greatest motorcycle racers of all time.  He knows what he is doing and will adapt.


Fingers crossed he can be back for Qatar

Better get fit and in top conditions, and comeback to win races later in season.

Nothing wrong in sticking with an iconic livery.

True that, given the impact and success it's classic in the making.

Especially considering the fact that Honda are sticking with the same crop of sponsora for years. Any minor changes in liveries for Yamaha and Ducati in recent years were a result of changing sponsors.

Na you can keep the basic design the same and still freshen it up. It’s nice to look at something a bit different to show the start of a new year.

Nothing wrong in sticking with an iconic livery.


Nah bring back the black

Na you can keep the basic design the same and still freshen it up. It’s nice to look at something a bit different to show the start of a new year.

Personally I would put the wheels on top of the bike.

I've been trying to figure out why Jorge's 99 looks so weird on the Honda...then I realized its the first time I remember it not being in red!! You can tell why though, it would have completely blended in

The heck is that tiny bike?

It seems that it is a Honda NSF100 that Márquez was riding to test his shoulder.

Marquez looks like he has beefed up over the winter

Looking forward to the Sepang tests next week.

Viñales would love that bike!

we are inching closer to the start of another season. looking forward to this one!

People saying the Repsol Honda livery looks the same have to make an appointment to their oculist. There's a new number on one of the bikes, how could you all miss that?

I find it just messy. 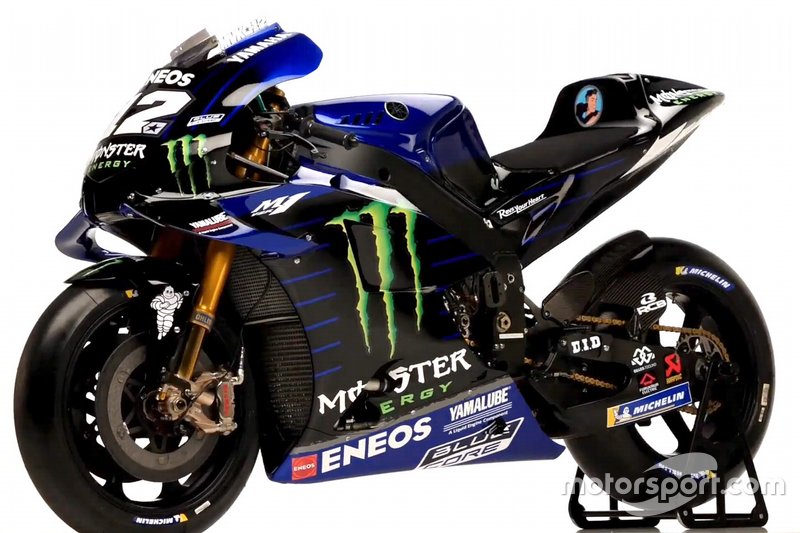 Think they have landed on size now 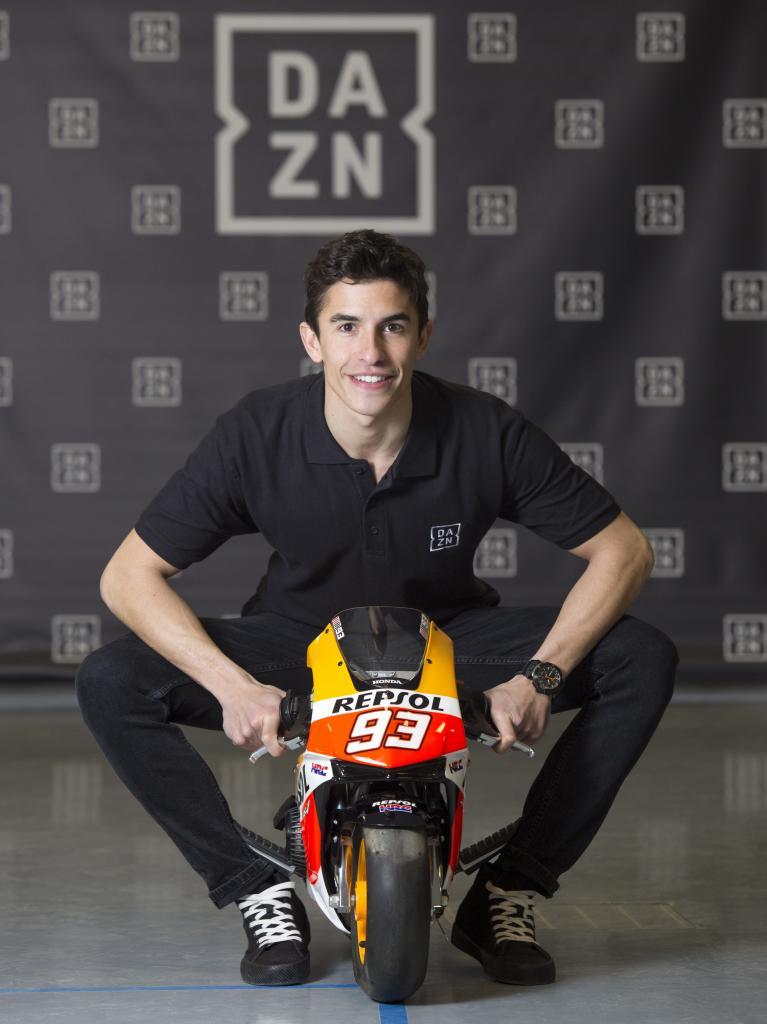 Yeah, kinda not that blue-ish anymore.

I find it just messy.

I think that's because of Monster logo. Ruins the "flow" of the livery, if there is any... And by itself this logo is messy. I don't really like it.

It somehow looks like a customer bike and not really like a factory bike. The livery looks cheap?

I don't mind it really, kinda breaks the monopoly of the blue and their own sponsors.

It works OK for me, and the other bikes unveiled look very samey, so this is a change.

Repsol need to do something different, their bikes are so boring to look at now.

Riding for the first time after shoulder surgery

These boys are made of tough stuff but that's going to take some recovery time to get over.