The PatBalDan, a "fixed" CVJ (Constant Velocity Joint) / Universal Joint of the ball type, is a 100% "constant velocity" joint capable for operating angles well exceeding the 60 degrees (the current world top is 54 degrees).
Quote from http://www.pattakon....onPatBalDan.htm :
To the question:
"Why the larger operating angles are preferable / significant / important?"
it replies the following quote from the officially published (2007) TECHNICAL REVIEW No.75 of NTN (one of the largest, worldwide, maker and supplier of car CVJ's and car transmission parts):
"Fixed Constant Velocity Joint with Super High Operating Angle of 54 Degrees
. . .
This maximum operating angle (54 degrees) for automotive driveshaft is currently the highest in the automotive industry.
The increase of 4 degrees in operating angle means that the minimum turning radius of an average medium-sized FF car can be decreased by approximately 70cm (13%) or the wheelbase of such class of a car can be enlarged by approximately 40cm (15%) while maintaining a minimum turning radius.
In other words, a medium-sized can feature a turning radius of a compact car or the passenger space of a larger car allowing designers more flexibility in consideration of layout and design"
End of Quote
Where the limitation of the maximum operating angle of the ball CVJ's comes from?
As the angle of the universal joint increases, the shaft secured to the inner race member hits on (or collides with) the tracks formed on the outer race member. From another viewpoint: at the greater operating angles, the tracks of the outer race member "cut" the second shaft limiting its diameter.
For instance:
With "arc-shaped" tracks, for a bending angle of 54 degrees each track on the outer race member needs to extend angularly for at least 54/2=27 degrees at each side of the bisecting plane of the angle formed by the rotation axes of the two shafts. At the maximum operating angle between the shafts (54 degrees), the one end of the track on the outer race covers 27+54=81 degrees, leaving the rest 9 degrees for the second shaft to pass, which means a total of 2*9=18 degrees "free" space for the second shaft to pass, which degreases substantially the diameter (and the strength) of the joint. With a, say, 70mm diameter of the arcshaped grooves, 18 degrees correspond to maximum possible second shaft diameter of 11mm (70mm*sin(18/2)=10.95mm).
This explains the need for unconventionally shaped tracks (arc+linear or arc+taper) in order to achieve larger operating angles (50 degrees in the first case, and the world top 54 degrees in the second case).
According the previous quote and calculations, the state-of-the-art automotive CVJ is impossible (geometrically) to operate with an angle of 60 degrees between its shafts.
The PatBalDan CVJ (or universal joints) 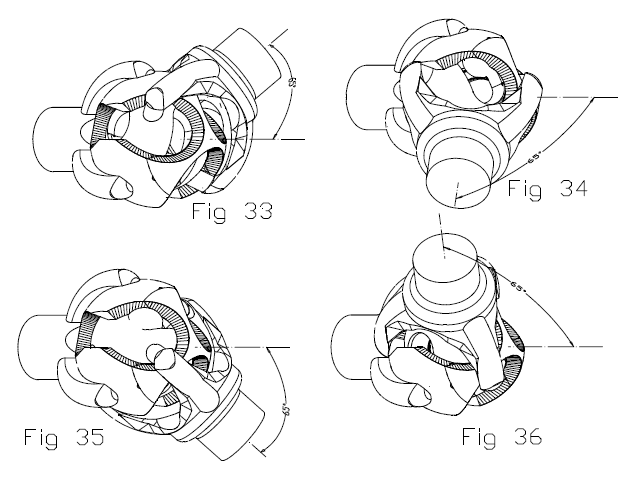 is capable, among others, for substantially higher bending angles, even for over 80 degrees (which is 50% larger than the current world maximum). And this can be done with any kind of tracks and/or offset (curved, curved+linear, curved+taper, axial offset, angular offset, cage offset etc).
According the "rule of thump" mentioned in the previous quote, with each 4 degrees larger operating angle, the turning radius reduces by 0.7m or the wheelbase increases by 0.4m.
Applying the above "rule of thump" on a medium size car equipped with the "Super High Operating Angle of 54 Degrees" CVJ's", the replacement of the CVJ's by CVJ's made according the present invention and having, say, 74 degrees operating angle (74=54+5*4) will reduce the turning radius by 5*0.7m=3.5m or thewheelbase will increase by 5*0.4m=2m.
A long-big car propelling its front wheels through PatBalDan CVJ's has, among others, smaller turning radius than a substantially smaller car, can U-turn in narrower roads, can follow narrower/steeper paths and can be parked substantially easier.
End of Quote.
As NTN claims for their TUJ cvj (that with the "Super High Operating Angle of 54 degrees"

1. Maximum operating angle: 54 degrees
2. Functions (strength and durability): equivalent to those of conventional fixed CVJs.
3. Transmission of torque is possible even at an operating angle of 54 degrees. 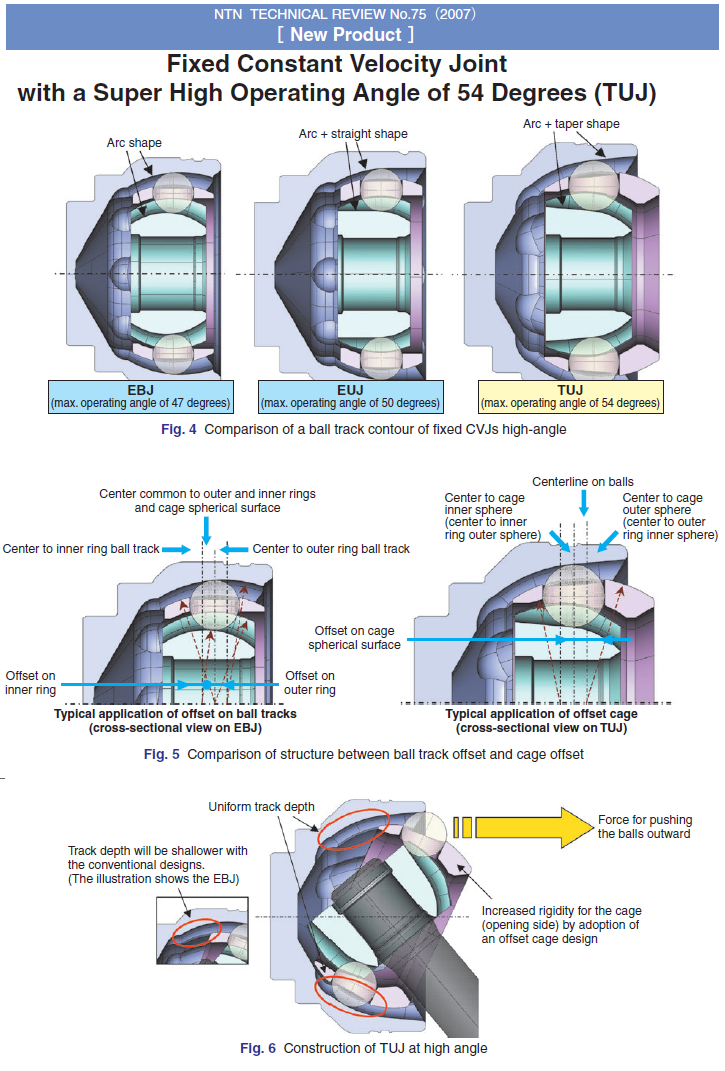 And here is a photo of five functional 3D-printed PatBalDan prototypes: 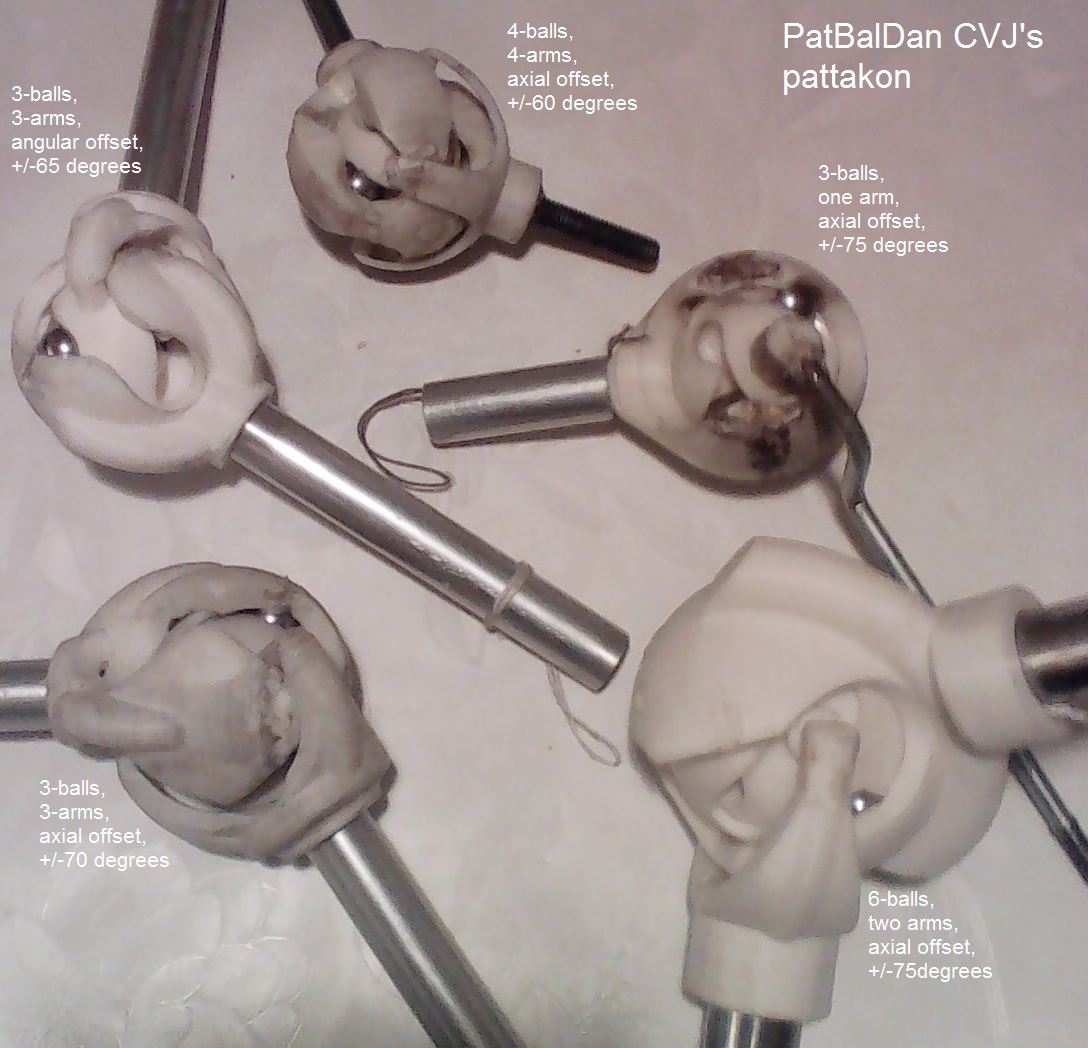 For more: http://www.pattakon....onPatBalDan.htm
Thanks
Manolis Pattakos

That would be very useful in steering columns. Getting the UJ angles optimised is a cause of constant aggravation (3 UJs floating in space with different pahsing for each one).

I'm sure you are aware of this but the torque capacity looks rather low compared with more conventional designs.

“That would be very useful in steering columns. Getting the UJ angles optimised is a cause of constant aggravation (3 UJs floating in space with different pahsing for each one).”

Interesting application; with three PatBalDan in series, the “direction” of the rotation can change more than 180 degrees (like “U turn”).

“I'm sure you are aware of this but the torque capacity looks rather low compared with more conventional designs.”

The following drawing shows the one shaft of a PatBalDan side-by-side with the NTN-TUJ: 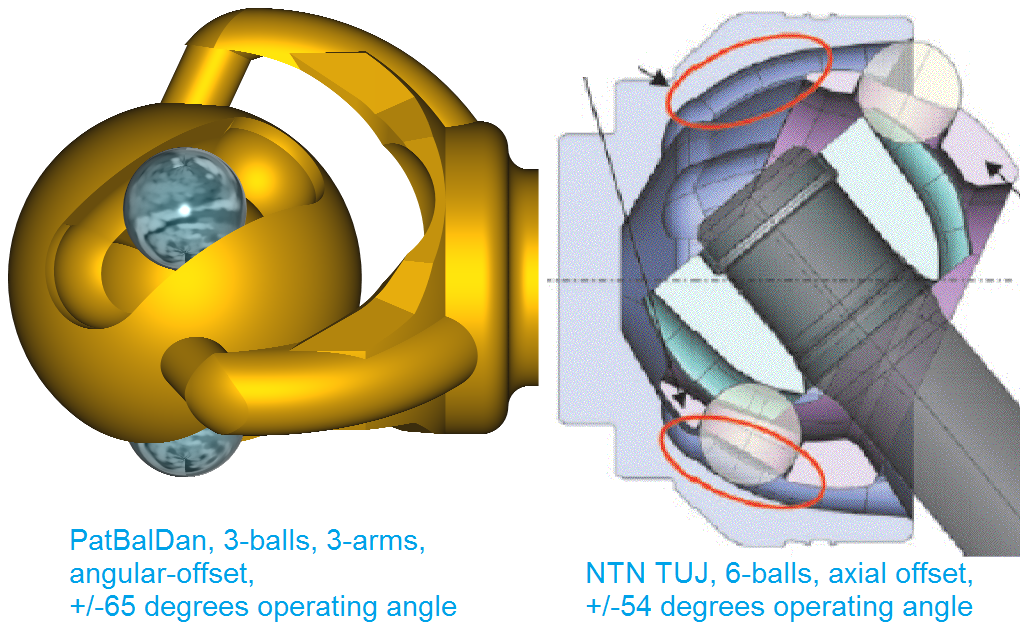 For the same external dimensions, the balls of the PatBalDan are substantially larger.

Here is the “cage” (“cage” in the meaning that it keeps permanently the ball centers on a plane passing through the center of the joint) of the above “angular offset” PatBalDan: 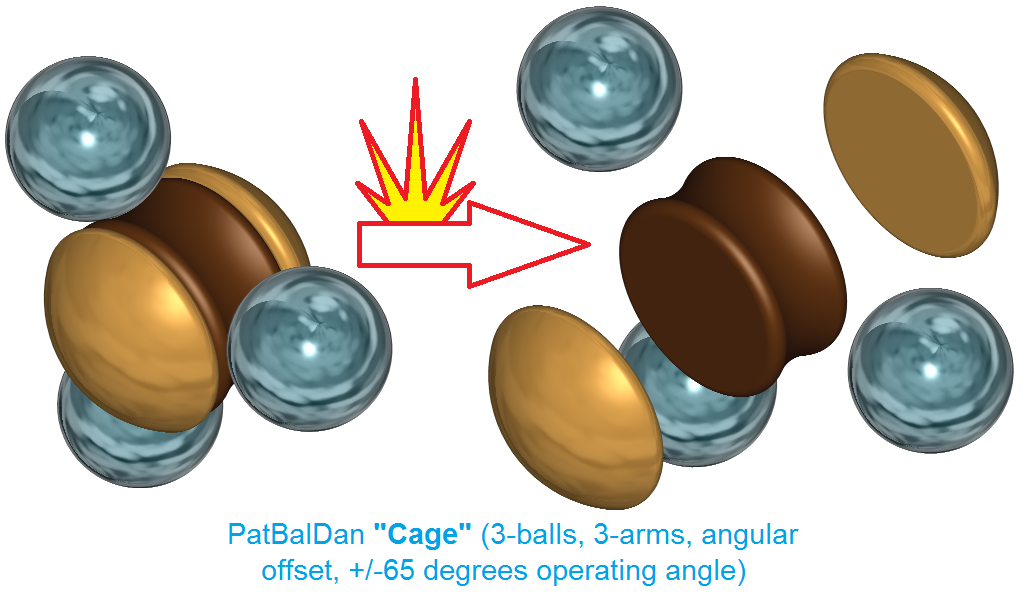 The fewer but larger balls, and the “linear contact” talk for increased torque capacity.

Yes, if necessary the "arms" (or fingers) can be bridged / webbed by an outer spherical cup.

Some other PatBalDan designs are already like "spherical cups".

Here is the NTN_TUJ for comparison: 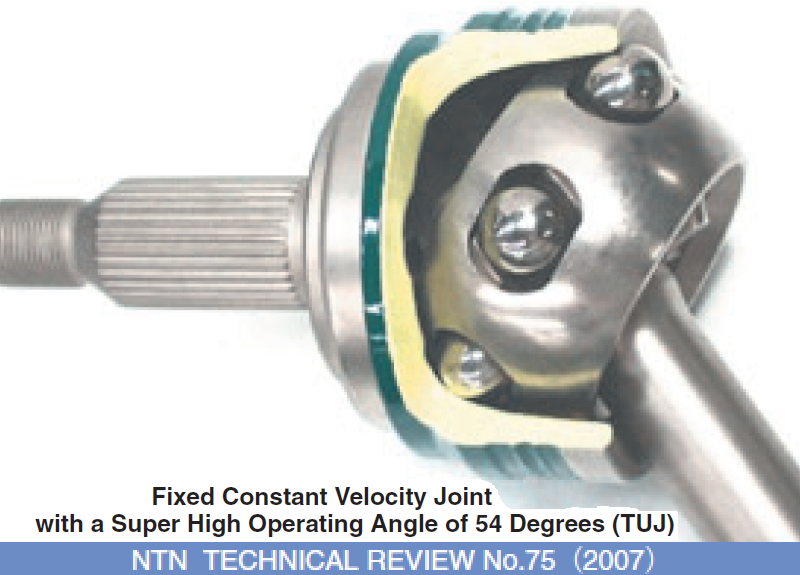 In both cases the "outer race member" is a "spherical cup".

I think it is more clear now.