The Payne-Baldwin Special (and other Baldwin Spls)

My fascination for chunky old Specials draws me to enquire about this one... 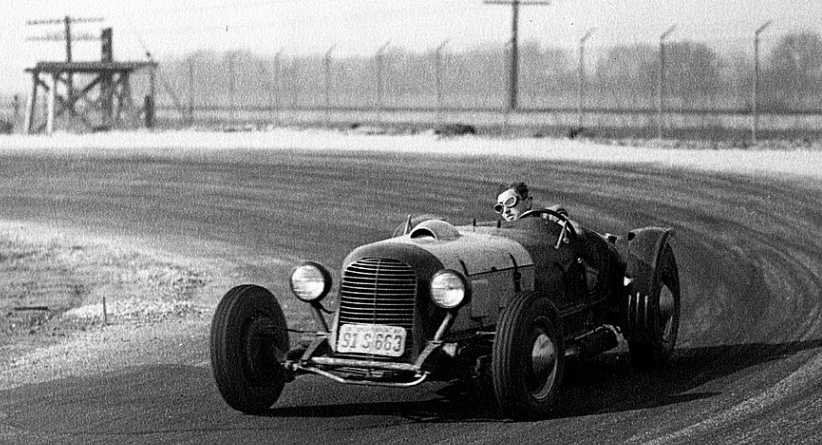 ...built by Willis Baldwin in the late forties and shown here being raced by Philip Payne in 1949 at Santa Barbara airport circuit.

From 'tamsoldracecarsite' comes this information:

This car is probably the most memorable “Sports Rod” of the early days of the sports car movement in America, being a typical example of a late 1940s "California Hot Rod", carried a step beyond what the normal hot rodders were doing at the time. Known in the States as an AV8, i.e. an A Type Ford chassis housing a Ford V8 motor.

In 1947, my late father, Philip Payne, drove across the States in a Brooklands Riley, before working at Roger Barlow’s ‘International Motors’ in Los Angeles. He became interested in the local sports car and hot rod scene and was an early member of the California Sports Car Club, as well as The Glendale Sidewinders (SCTA).

He purchased this Special (91 S 663) in November 1947, from Willis Baldwin of Santa Barbara – the “father” of road racing specials. Baldwin built this, the first of four specials, in 1947, using the frame of a 1932 Ford. My father quickly replaced the Cadillac side-valve, installing a hot 4.4 litre (268.4 c.i.) Mercury Flathead with an Iskenderian track-grind cam, Evans 9:1 heads and triple-carb intake manifold, producing some 175 bhp @ 5,000 rpm. Drive is through a lightened flywheel, 10 in Mercury clutch and three-speed Ford Pilot transmission with a home-built remote shift linkage to a 3.78:1 rear axle. The cowl covers a split-centre Ford radiator whilst the grille consists of curved lengths of welding wire. The bonnet is of 20 guage alloy and the air scoop is from a North American aircraft, whilst an Auburn dash is used. Front cycle-type wings were made from spare wheel-cover bands.

The “Baldwin ‘Payne’ Special” proved very competitive and successful in many Southern Californian events, ranging from circuit racing to hill climbs and dry lake trials. Returning to Portsmouth, England in October 1950, my father continued to sprint the car (FTP 348), gaining successes at Southsea Motor Club events, held at the famous Goodwood circuit, as well as Gosport Automobile Club speed trials. Bill Boddy wrote a very favourable ‘The Editor Encounters A Hot-Rod’ article in “Motorsport” of January 1952, having previously been very sceptical of the performance of Hot Rods – this lead to a very heated exchange of transatlantic letters in that magazine!

Naturally, the car has a very special place in the Payne household (Philip’s widow Vicky, and son Stephen), and is superbly maintained by Alan Collins, the Jaguar specialist, of Maldon, Essex. An overhaul was completed prior to the car’s appearance at The Cartier Style et Luxe at the 2001 Goodwood Festival of Speed, keeping the car as original to its’ illustrious sports rod heritage.

Baldwin apparently built four cars of similar style. Maybe someone has pics and details of the later ones?

It's said that a Cadillac V8 first nestled between the frame rails, I wonder why that was pulled out? Could it have been weight, or merely a lack of speed equipment compared to the Ford?

Nevertheless, my quest here is to learn what Bill Boddy had to say about the car in that January, 1952 Motor Sport article.

There is a comment somewhere that it's an 'Anglo-American' Special, but I see nothing in the description that's British - except for the mention of a Ford Pilot gearbox. Would not this have been a regular Ford 3-speed? Perhaps with the linkages on the other side?

In 2003, we were visiting family friends in Portsmouth.  My interest in car racing history came up in conversation.  I was told that one of their neighboring friends had some "old Ford thing."  Turned out to be Stephen Payne.  That year, he and Simon Taylor jointly shipped the Baldwin Payne Special and HWM Stovebolt Special to Monterey.  Stephen's car and another Baldwin Payne Special of the late Jim Herlinger were reunited at Laguna Seca.  Here is a photo of Jim with his car at Teretonga in 2006. 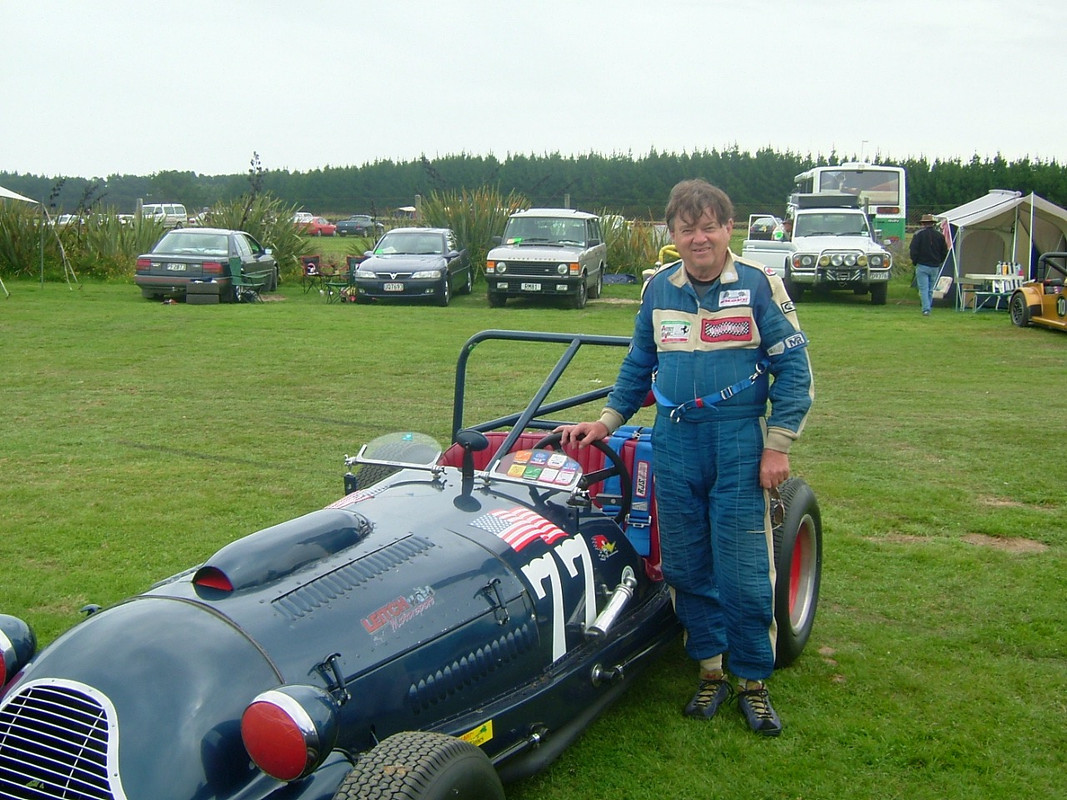 Hopefully, this link to Bill Boddy's article will work:

However, it's obviously been put on the net with a scanner reading the article from the magazine, there are some glitches and I wonder what this means?

The brakes on this Ford are normal 1939/48 Ford Lockheed, which are quite useful on a 30 cwt stock saloon and consequently are deemed adequate for a hotrod weighing under 18 cwt. Incidentally, differential 1 in by 11/2 in cylinders operate the front shoes.

Another anomaly is that Boddy writes that the axles are from a '39 to '48 Ford. The problem is that the 1946 models saw new wider axles fitted.

Yes, there were four of these cars, all similar to some extent.

The odd man out was the one about which I'm enquiring, it having had a Cadillac V8 in it before being changed to a Ford/Mercury lump.

I believe Jim Herlinger's car in the photo above is more correctly referred to as the Baldwin Mercury Special, not a Baldwin Payne Special as I said in my post.