Dakar to be hosted in Saudi Arabia in 2020

Sounds like a possibly controvertial decision, I've already been reading some concerns regarding possibility of female competitors being able to compete. It's going to be a challenge, especially on motorcycles, since apparently women drivers (remember, liaison is done partially on public roads so this is a valid concern) have to have male guardian with them at all times?

I got used to Dakar being in South America and all, Bolivia/Argentina/Peru are beautiful and challenging. I'm not keen on a move to the Middle East for a multitude of reasons, their attitude to women being one of them but the challenge and romance of the event being another.

EDIT:  From a dude that has run Dakar and is a professional rally raid racer and promoter.  It's official, here's the flyer announcing the press conference. 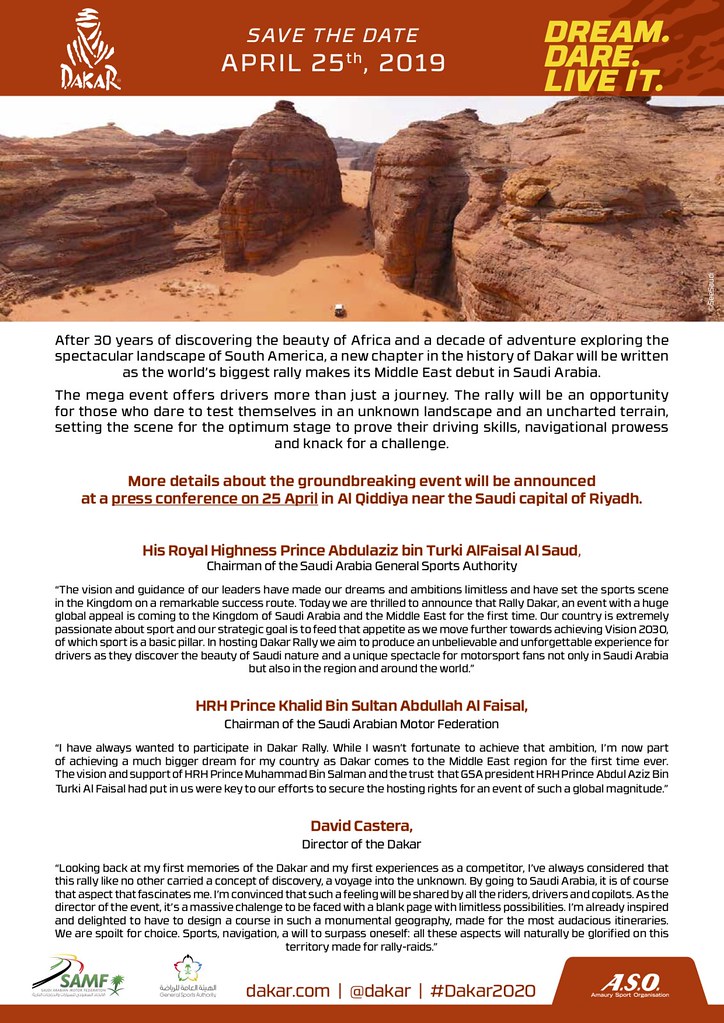 They have plenty of sand and even more money to throw at the event, its a no brainer!

They had to move from Africa due to threats from terrorists, so now they move to the middle-east where they all hang out....

At least it's not called Paris-Dakar anymore.

so that will be very difficult for all women there...

Should call it Dakar Challenge then, like UAE desert challenge.

I used to watch the African editions quite a lot actually. Always was a fan of the truck classement since Jan de Rooy turned up in 1987 with that INSANE 1000hp DAF with two turbocharged engines. Too bad that in the second year Theo vd Rijt crashed the second DAF in 1988. navigator Kees van Loevezijn got thrown out and was killed instantly

After that Daf pulled out until early 2000's, then after some issues with ASO rejecting their trucks De Rooy switched to Iveco's

I could understand the switch to South America, but it wasn't really dakar anymore. It still was exciting, especially the Chilean and Peruvian Desert. Argentina was mostly sprint rally. They were looking A) a stable country willing to pay the fee (check, money enough in the oil states) and B) a lot of sand (also check, knock yourself out).


That's it, isn't it. In the same way that F1 turned its back on Imola, Magny Cours etc for Bahrain, Abu Dhabi et al, now Dakar turns its back on the beauty of South America to go play in a massive sandpit with lots of money. It's a sad one, I think. I know moving to South America was controversial in itself, but Peru and Bolivia especially are awesome places. Where's the adventure going in Motorsport? Thank God for the TT.

Maybe they can call it the Burqar