39 replies to this topic

My apologies for this rather blatant piece of promotion, but I am delighted to say that a publication date of November 2019 has now been confirmed for my nine-years-in-the-writing book which details Niki Lauda's full competition history.

Further details can be found at https://www.evropubl...etition-history

It’s fair to say that without “TNF” this book would not have happened, as this community of enthusiasts and historians has been fundamental to sourcing many of the contacts who have helped to inform the text and images. They also provided me with the stimulus and encouragement to finish it. I'm rather proud of the result.

Great to hear, Jon, congratulations! Someone pass out the cigars?

Great to hear, Jon, congratulations! Someone pass out the cigars?

Not sure if I'll be buying cigars on the strength of it, Michael, but then it was never about the money; it has always been about doing the best possible job. Hopefully it's a fitting testament to a great man.

Good to see you've got what I'd call a proper publisher in Evro!

Congratulations Jon, that's a wonderful achievement and we will all await the results eagerly! Bravo!

Since it's not about the money as stated, make my cigar a Dominican Maduro. Thanks in Advance.

Good luck Jon. As I'm finding out with writing the Richie Ginther book, it's a wave of different emotions, both positive and negative whilst writing it but how good must it be to soon see and feel the effort in a tangible form. Hope it all goes well.

Congratulations on a huge and worthwhile achievement!!  I look forward to reading your work!!

Best of luck with it Jon, I'm sure it will be a cracking book.

Well, it's now real; a copy is sitting next to me on my desk and it's rather difficult to believe that after nine years of research and writing, it has all come to fruition.

I am hugely proud of the result, which has exceeded my expectations in all respects; it's a hefty thing, weighing in at over 2 Kg with 376 pages, 120,000 words and 500 photos (half of which which are previously unpublished and a fifth of which are previously unseen, having come largely from private collections). The photo reproduction in particular is stunning.

I am immensely grateful to the team at EVRO Publishing who had the faith in backing the project - from a completely unknown author. Sincere thanks to our own DCN who provided an insightful preface, and to the many TNF members and their contacts who have willingly offered information and archive material to enable me to complete the task.

Having been a reader of MotorSport since 1975, it was also rather surreal to see my work in there in the form of the 8-Page extract that they chose to run in their January 2020 issue (I'll forgive them for misspelling my forename!) - all told, it's been rather an exciting year.

Congratulations Jon. Having been involved in Michael Argetsinger's Bobby Marshman book and seeing it come to fruition this year, I can certainly appreciate your excitement and pride.

I can scarcely imagine the difficulty of writing analyses of Lauda's races, while a voice in your head comments: "That's b****y s**t!"

I look forward to buying a copy.

I can scarcely imagine the difficulty of writing analyses of Lauda's races, while a voice in your head comments: "That's b****y s**t!"

Spot on, Sterzo - Niki was famously uninterested in his own history. Although he did mellow slightly in later years, most interviews with him show him talking about "big picture' stuff rather than detail. I could imagine him asking me "Why are you interested in all this old s**t?" Hence the need to go back to original source materials, contemporary reports, local publications and the kind of archive material that so many TNFers have been kind enough to provide.

You even asked me for help on one small point, which showed me how determined you were to get the facts even if I couldn't help you very much.

You even asked me for help on one small point, which showed me how determined you were to get the facts even if I couldn't help you very much.

But you did point me in the direction of someone who could help me, Ray. That's the beauty of communities such as this, and so often we undervalue the power of our networks.

Hi Jon -my review copy from Evro arrived the other day and today I am enjoying  reading about Lauda's exploits at some East European circuits I'd never even heard of before. A full review will appear on speedreaders.info in due course

Hi Jon -my review copy from Evro arrived the other day and today I am enjoying  reading about Lauda's exploits at some East European circuits I'd never even heard of before. A full review will appear on speedreaders.info in due course

Thanks John - I would very much value your considered opinion. Good to see that the review copies have landed with the "right" people.

Though I do feel a bit like a schoolboy waiting to have his homework marked by the headmaster......

Just in time for Xmas. Well done for producing a racing biography from such a different angle.

Recently received my copy from Evro. Fascinating account of each race Lauda took part in, not just his F1 career. Many of the photos I have not seen before, hard to pick a favourite but perhaps the pitlane shot from the Monza Lotteria in 1971. Interesting and enjoyable Foreward from John Watson. A fitting detailed tribute to Lauda’s career, I wonder what he would have made of it?

I approach every new book with a mixture of reserve and cynicism. Too many have disappointed. I already have four books not merely about, but by, Lauda. However, I firmly believe that a gentleman's education is incomplete without a copy of "Niki Lauda: His Competition History". If asked this afternoon to list my favourite authors they would be:

It has been suggested that I acknowledge Sterzo's kind comments with a sonnet, but maybe best not to ....

I have just purchased your book from Book Depository, along with “Sharknose V6.”

I admired Lauda more than any other driver .I am both relieved and  delighted that this book does him full  justice . My review is now on speedreaders,info

Thanks to this thread, I've just ordered a copy - so there's another sale chalked up !

Dammit, I have no bookshelf in the Westy!

Congrats, Jon. Will order one in Spring anyway, to go straight into storage. Review promised by 2030.

My copy arrived today. Haven't managed to read it thoroughly yet but it looks superb.

Just browsed through it and the first impression is pretty good. A race by race account, even the most obscure ones at the beginning of Lauda's career not to mention those where he was supposed to be present and was not (reasons are explained). Seems some anecdotes are also spread around the book and the production is of very high quality. Pictures are fine, in particular those of the lower formulas. Clearly a work of love by an enthusiast but with every attention given to detail. For a first attempt, chapeau! Also liked the picture of the author with his model car's collection and the acknowledgment of the support received in this forum.

I bought it as a Christmas present from me to me. I assumed it would be worthwhile, a creditable effort, etc etc. But what a treat - my head has been buried in it for much of the holiday.

OK -  I'll admit I'm biased. The book neatly spans the exact period of my period of peak interest in motor sport ( 1969-1985 ) and I always took a keen interest in Lauda's career. When I saw it announced, the cynic in me noted two points : 'Competition History' - sounds boring, bound to have masses of lap-time graphs and so on. And 'profusely illustrated' - heard that one before !

Wrong, and wrong. It's very readable indeed. Plus, I had a personal 'litmus test' for the photos. I saw Ickx take Lauda around the outside at Paddock in 1974, and page 142 has the familiar but essential pic of that moment. But - would Niki's efforts in an Alpina CSL at the '73 Spa 1000kms be included ? If it is, it'll for sure be a grainy, indistinct black-and-white, I'll bet.

The photos and captions alone are worth the price, but there is so much more to savour here. Congratulations to Jon Saltinstall and publishers Evro who have produced my favourite motor sport title of 2019.

For anyone attending Race Retro this year who is not yet fed up with me banging on about the book, I'll be doing an interview with Gemma Scott on the Riel stage at 11.00 on Saturday 22nd, followed by a stint on the Hortons stand from 12.00. It would be great to catch up with any TNFers who are around.

Digital flyer can be found at : 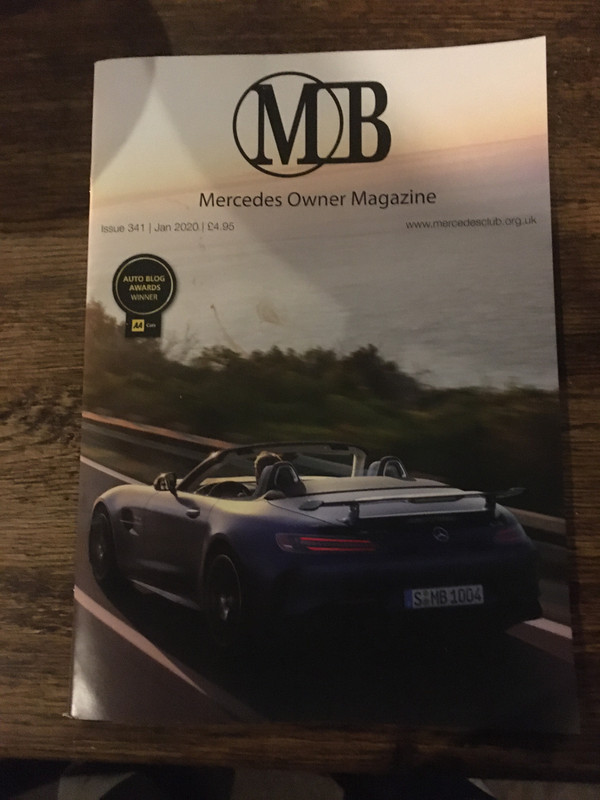 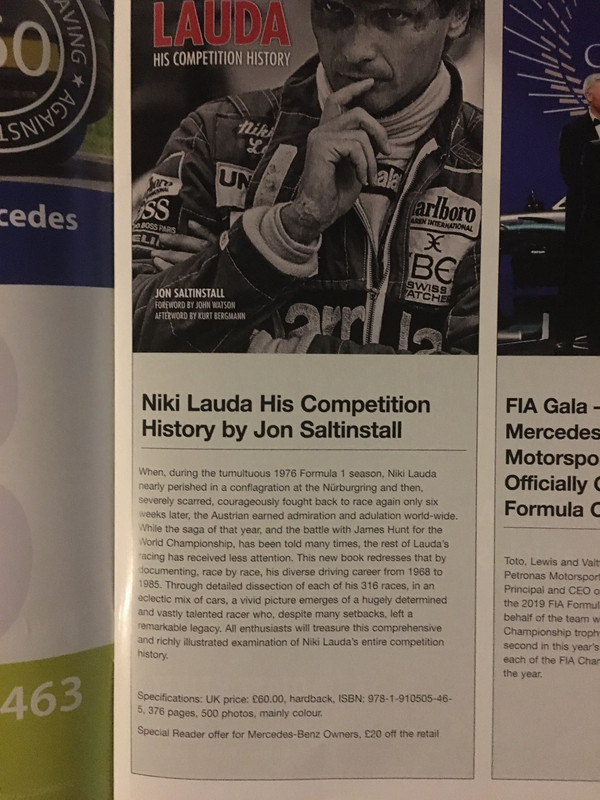 Nice to meet you at Autosport International Jon

Cheers Arti - looking forward to it.

I knew about the article in the Mercedes-Benz magazine, but hadn't seen it, so thanks for sharing.

One of the unanticipated consequences of publishing the book has been the tide of reviews that have been amazing, if consistently humbling, - this week's "Autosport" for example - 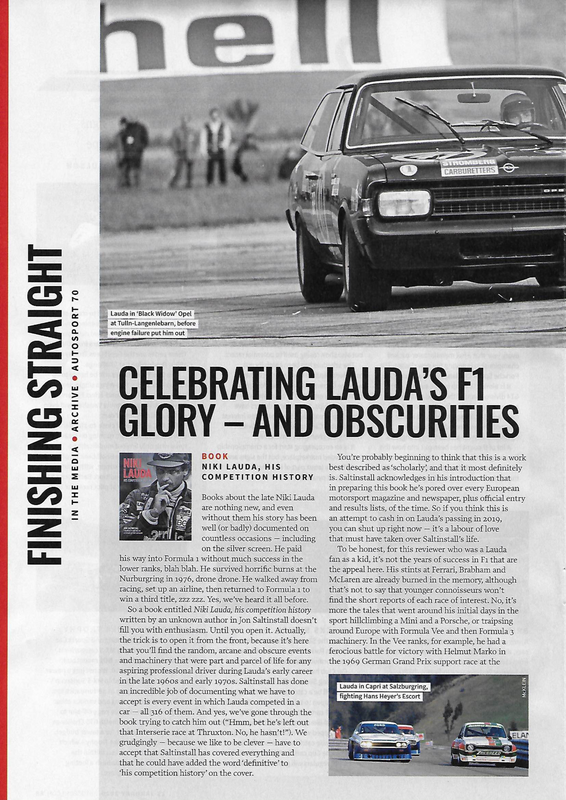 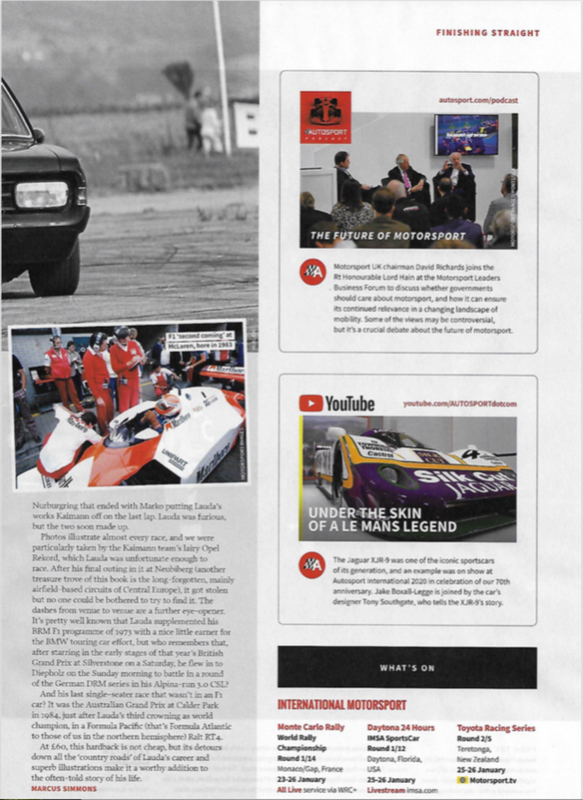 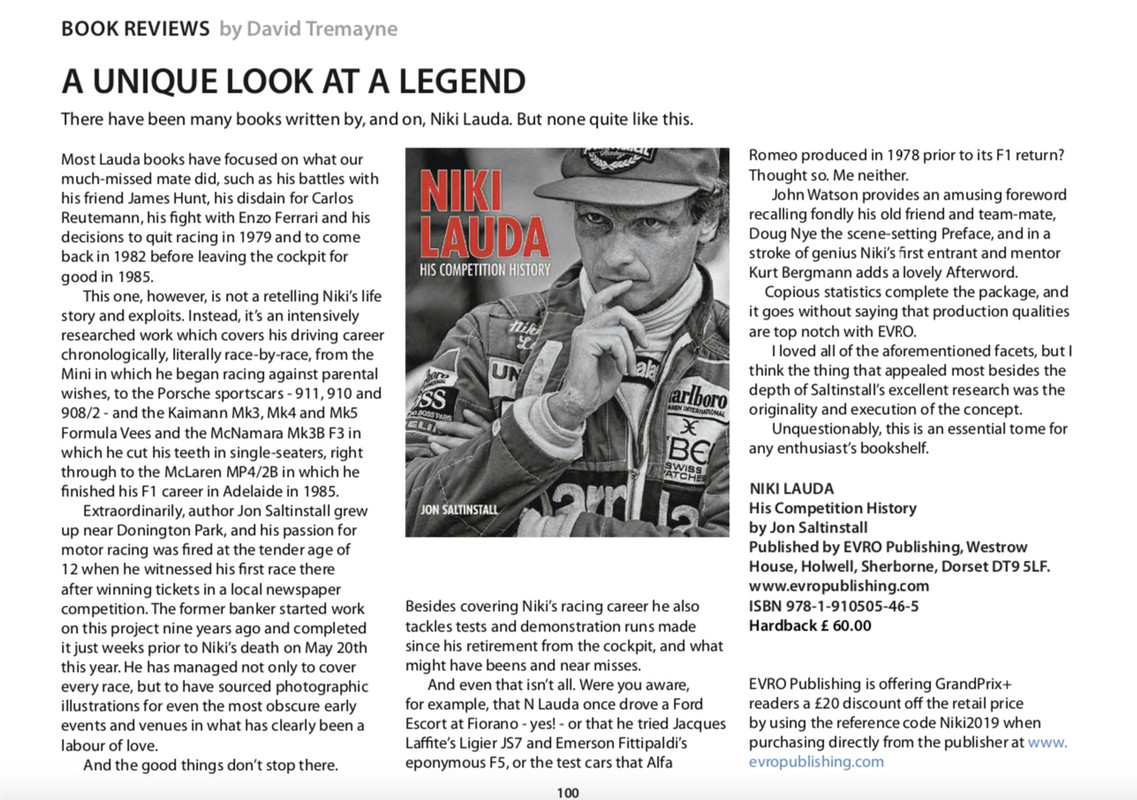 Thanks to Jim Houlgrave for this - yours truly "performing" at Race Retro, with Gemma Scott interviewing...

Apologies for the self-promotion! 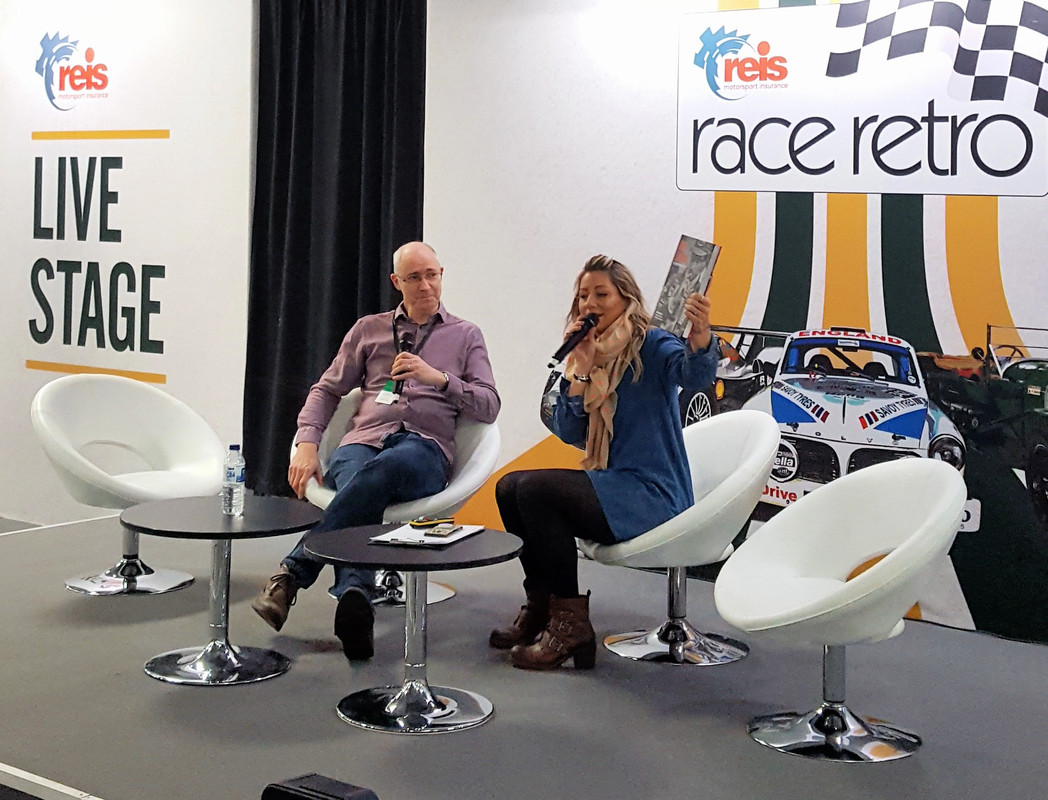