28 replies to this topic

My only sporting hero, ever.

Thanks for the memories. May you make the ton and more.

It's actually tomorrow, but who cares?

It's a great age to reach for anyone, let alone a man who's had a body that's suffered on occasion. To think that the fastest man of his time has reached this milestone when his peers are more or less all taken from us.

I was 11 years old that fateful day. I was inconsolable. Had to turn my favours towards N.G.Hill. It' so difficult to explain the Great Man to young Effwun fans.

An early Happy Birthday Sir, from me.

Happy Birthday, S. Moss, and thank you for entertaining a ten year old back in the fifties.

It's actually tomorrow, but who cares?

It's already tomorrow where Gary is!

Although he's obviously having a bit of a late night.

Hmmmm....My salutations from this morning seem to have disappeared, so I'll repeat my....


Warm wishes to Sir Stirling for a very happy birthday.....

Cheers with lots of "bubbly" to most likey the best all-round race driver of all times! I can only hope that he is well.

Susie Moss is touched, delighted by - and grateful for - the public support and warmth so comfortingly demonstrated at the Revival...

The (in my view) lovely archive movie edit found starting around 9:24 on this video link is the work of David Weguelin, of Motorfilms....

Thank you Vince and Doug - a lovely tribute which brought a tear or two to my eyes.

Happy 90th Birthday to the man who became my first-ever motor racing hero when I was around eight or nine years old.

I was too young to see him race...

But I'm old enough to acknowledge his significance!

I waved to him in 1997 as he drove a red Maserati or Ferrari past me in Basildon in 1997, and he waved back! Happy Birthday.

Should have seen him drive at the 2007 Brooklands Centenary but he didn't manage to helicopter there in time from a race at Le Mans.....

I saw him race in the late eighties/early nineties in that little sports racer that looked a bit like a Lola Mk1 (the name escapes me... Widi maybe?) at Brands where we were competing, he asked if we would mind moving over so he could drive past to the pits and my father came over all of a flutter, not something he did EVER in my experience, he is a hero to many, me included!

My childhood hero too.  Many happy returns Sir Stirling.

There must be a small army of us ex schoolboys to who Stirling Moss was a hero. Now he's an 'old boys' hero and always will be.

There must be a small army of us ex schoolboys to who Stirling Moss was a hero. Now he's an 'old boys' hero and always will be.

Not just old boys. One of the greatest moments of my life was to spend 10 minutes with Sir SCM in 2010.

Im sure there are others of my age that will also have similar blessed memories of the great man.

Here's a piece of nostalgia;

but he may not have seen this one as he only made a brief stopover in Perth, Western Australia,

In case the print is unclear, mechanic Tony Robinson is next to 15 y.o. Jill Blythe

who accompanied her father, Dick, to the airport to greet Stirling.

Dick was at the time the vice president of the WA Sporting Car Club. 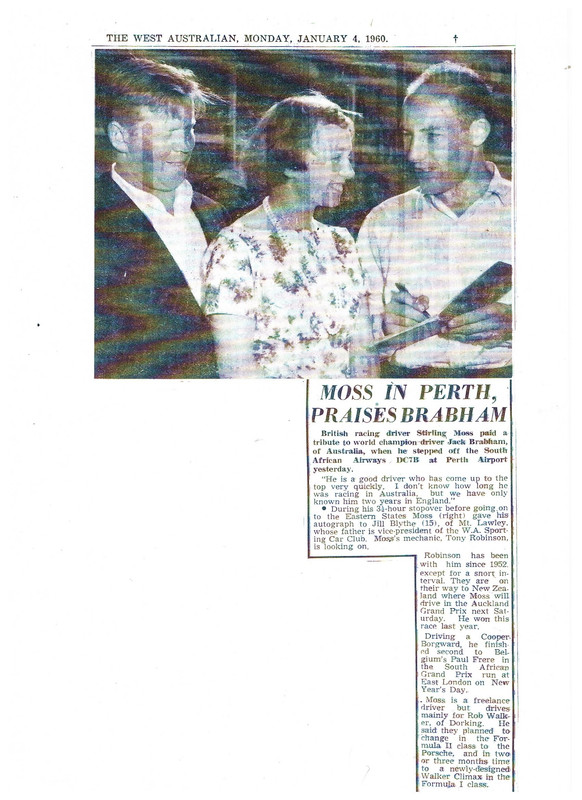 An example of just how important Stirling was (arguably still is) in the motor racing world was a Nigel Roebuck article in the 90s where he related Richard Petty's visit to the Autosport awards. Gathered there were luminaries from the around the world.....what was the highlight for The King? "I met Stirling Moss!"

Though my own meeting with him was necessarily brief, Sir Stirling was courteous and his signature on my book is beautiful...not some quick scrawl that you get from some celebrities. A legend on the track and off it. I hope he was able to enjoy his birthday.

Before the one public showing of the unreleased Fangio film in the seventies, in (I think) Kensington Town Hall, DSJ and Stirling stood chatting in an aisle. My wife was carrying my copy of DSJ's The Racing Driver (what are wives for?). I got as far as saying "There is DSJ -" before she rushed across, cut in front of a bemused Moss, and asked for DSJ's signature on the book. I still treasure the sheer delight on Stirling's face at being ignored in favour of Jenks.

Before the one public showing of the unreleased Fangio film in the seventies, in (I think) Kensington Town Hall, DSJ and Stirling stood chatting in an aisle. My wife was carrying my copy of DSJ's The Racing Driver (what are wives for?). I got as far as saying "There is DSJ -" before she rushed across, cut in front of a bemused Moss, and asked for DSJ's signature on the book. I still treasure the sheer delight on Stirling's face at being ignored in favour of Jenks.

Actually the Commonwealth Institute in 1976, (I think) and one of Cameron Millar's "CM" series of Maserati 250Fs (that got a slightly damaged nose when the Institute asked for it to be moved on its display area) was there too.    A few years afterwards, I arranged a showing at the National Film Theatre as part of a themed event that also featured films with either no, or very limited, release.  Hugh Hudson was the director and he  had been persuaded by the film's producers to make it more "popular" by including somewhat scenes of accidents most of which had no bearing on Fangio's career.   DSJ was there too and nearly walked out as he absolutely hated that version of the film.    I do not think at the time - and probably not now either - that a copy of the original edit existed.

Oh, and a very Happy Birthday to Sir Stirling.    He came along to one of our National Motor Museum events at the NFT when we recreated the 1958 BRSCC  "midnight matinee" film show!

In 2001 we had a young Jack Russell Terrier we named Moss... That year we took part in Ennstal Classic, knowing that Sir Stirling and Lady Susie would be there, too. So, equipped with some photos of our dog we took all our courage and approached them at dinner, saying excuses for naming our dog Moss and asking if SM would sign those photos. Both were delightful, SM saying, that even if it would be a pig - as long as it is called Moss it is great.

Shortly before Christmas 2001 we then had the idea of thanking them again, making a card with photos of SM racecars photoshopped with the head of our dog in it. Shortly later we got a wonderful reply letter, adressed to DOG TERRIER MOSS, c/o Ralf Pickel....

From then on for 15 years we did make a new card every year telling some racing adventure SM had with our dog.

Every time came a nice reply - and two of those cards even made it permanently on the official SM homepage.

When our dog sadly died, we did send SM and Susie a letter, telling the sad news. We then got a very warm-hearted letter, even remembering our first meeting in 2001.

I hope, my story here has not been too long and, of course, it is not racing related. It just shows the personality of Sir Stirling and Lady Susie - they really made our days when we got mail from them.

Above all, he has always been a fan - and in my experience of meeting him a few times, a thoroughly decent and humble bloke. (Er, Sir Bloke, I suppose, these days.)

Here's a snap I grabbed at Adelaide in the mid 80's. 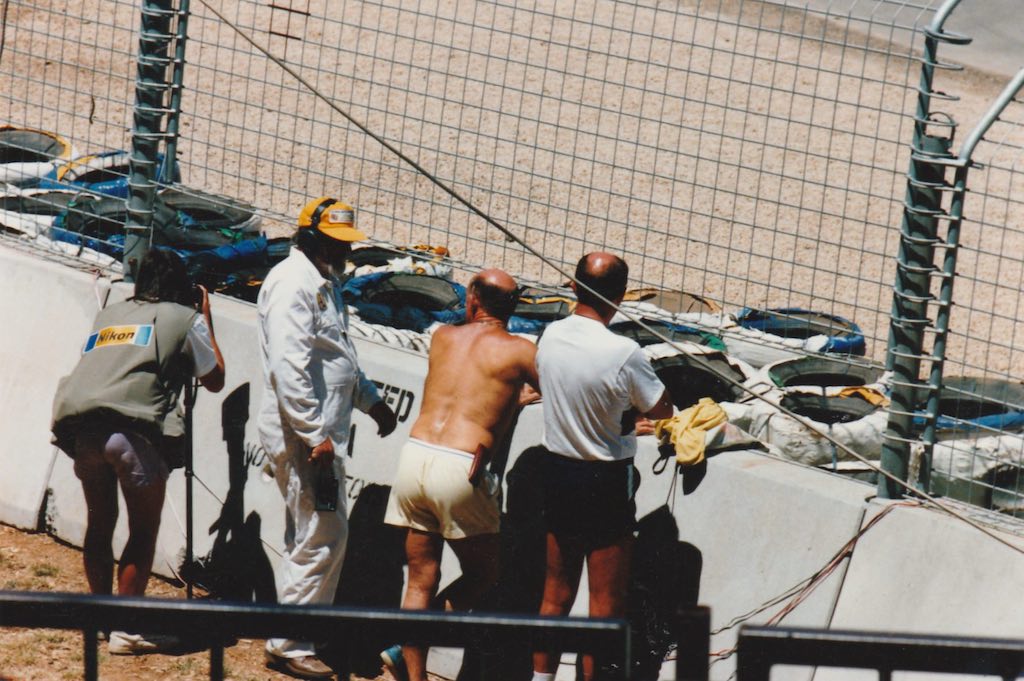 I saw him race his Widi MkII at Zandvoort in the Eighties, when I was a kid. Years later he signed my programme at the Spa Six Hours after I lurked for quite a bit - the only time I‘ve ever been starstruck, I think.

Thank, s for the memory,presently in Majorca waiting for final practise session to begin in Singapore.