27 replies to this topic 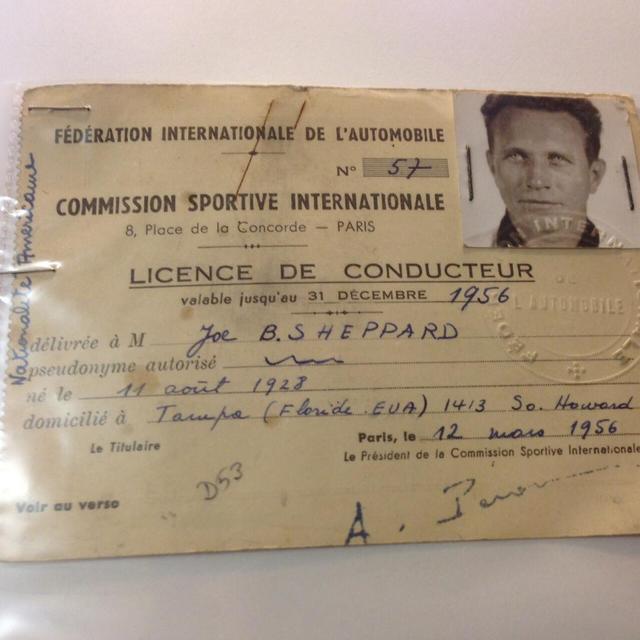 We are very sad having to report that Joe Sheppard, one of the best racers that Florida ever produced, has died today in Tampa, October 13, 2019. He was 91 years old and had been in failing health for the last few months.

Sorry to hear this news. Condolences to his family and friends.

Here are a couple of earlier threads on Joe, although most of the great photos posted by Jerry and others are no longer there:

Jerry, do you think you could repost the pics now missing from the original thread?

It is always sad to hear of the passing of a member of our sport.  I looked him up on the Racing Sports Cars web site and saw an interesting result for the 1955 Sebring 12 Hours.  "did not qualify (Started illegally >= flagged off)".  There must be a great story behind that.

This forum was introduced to Joe Sheppard because of his racing successes, twice co-driving at Sebring with Colin Chapman and being one of the people who put Lotus on the map in the USA. But he was especially gifted as a warm and kind human being, someone who was almost always immediately liked by others. Even the super-serious competitors he beat could only find nice things to say about him. He outlived almost all his friends though, so his generously long life had him at a lot of funerals.

Something he told me about his racing years, a period we celebrate on this forum was, "You just don't know what you missed. Those were such fun times." 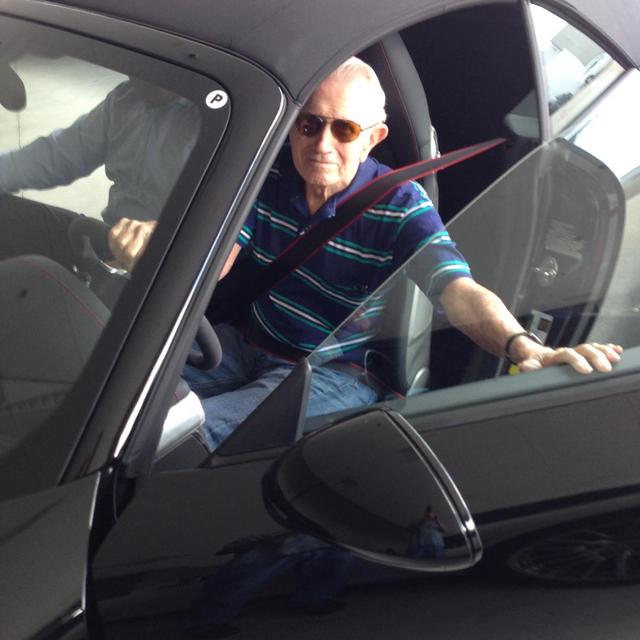 A more recent picture of The Tampa Hotshoe. 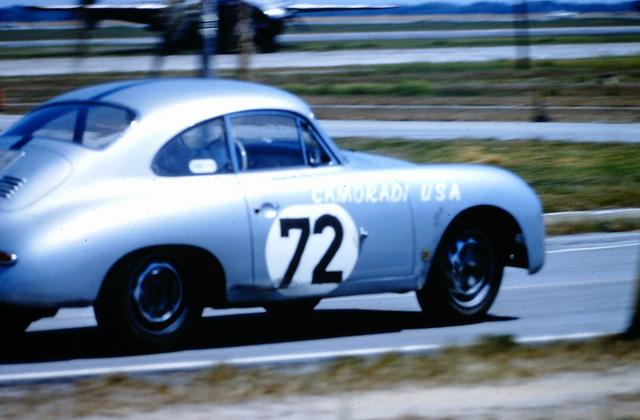 Sebring 1960. The CAMORADI-entered Porsche Carrera that Joe Sheppard and Dick Dungan took to ninth overall [first in class], in spite of running almost without brakes after four hours and losing fourth gear as well. 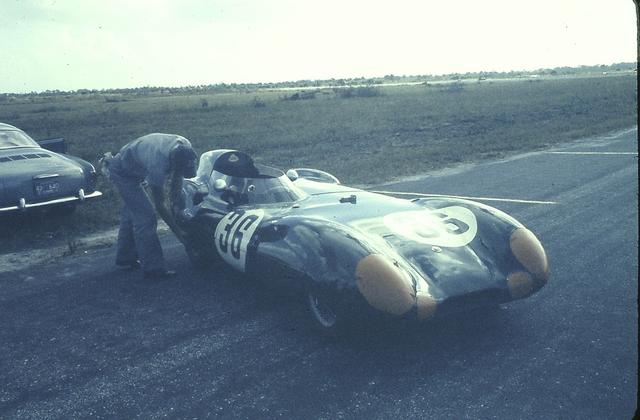 The Lotus Eleven in which Joe Sheppard was so successful in 1956 and 1957. It is seen here at St. Simons Island, on the Malcolm McKinnon airport track, in June 1957. Joe won the prelim, but the Climax engine threw a rod by mid-race while leading the feature. 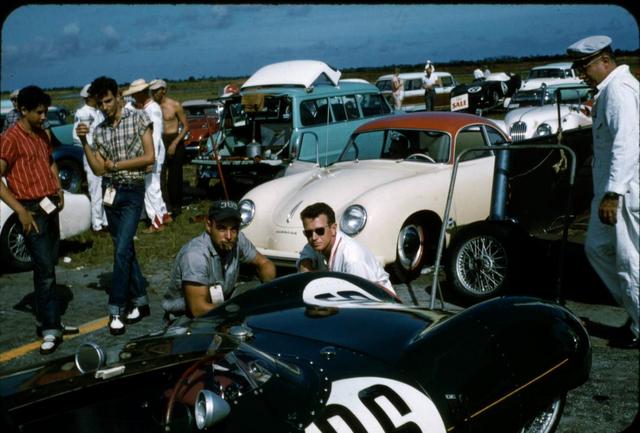 Another shot of Joe Sheppard and his Lotus Eleven.

I felt sure I could count on you. 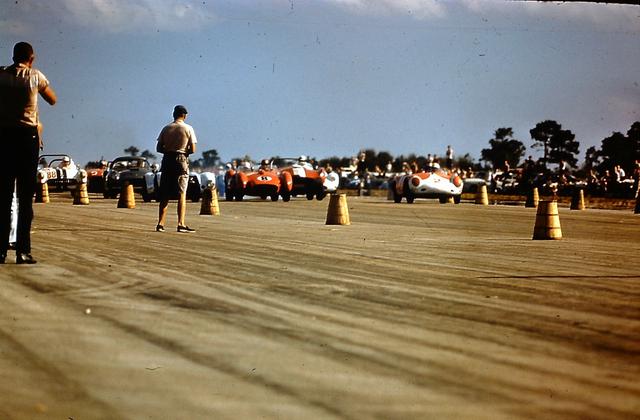 The start of the Cocoa-Titusville feature in February 1959, showing all the Florida regulars, plus one Canadian.

Joe Sheppard is on pole with his red/white 550RS, next to Jim Hunt’s 250TR and Bill Sadler in his Sadler Mk 3. The #88 Corvette belongs to Bob Kingham, the grey 250GT TdF has George Arents at the wheel and that Chevy-powered Arnolt is Ed Rahal’s. Sheppard claimed first overall over David Lane’s Maserati 200SI, the white nose of which can just be seen. 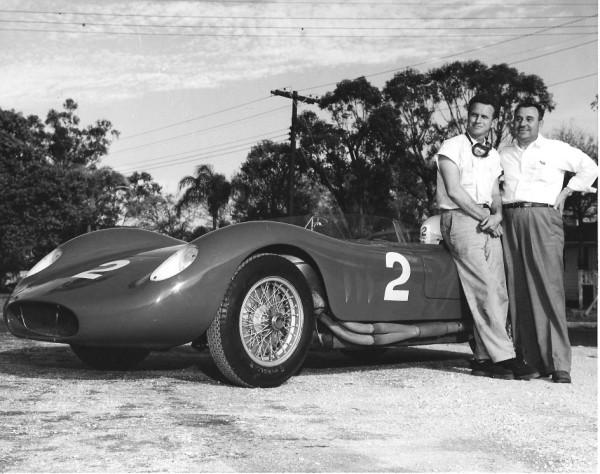 Joe Sheppard and car owner Gaylord Jackson with the car that Joe raced after his Lotus Eleven: a Maserati 200SI, chassis 2423, acquired new by Jackson from Carroll Shelby Sport Car Inc. Jackson was a furniture manufacturer from Chattanooga, who fielded a Jaguar D-type for other drivers before he bought the Maserati.

Sheppard made four appearances in the 200SI. In September 1957 he finished the prelim in third, after setting fastest lap but spinning next. In the feature Joe finished second overall, having to let Eddie Crawford’s Porsche 550RS go ahead in the pouring rain.

In the October 1957 Enoche at Gainesville he won both the prelim and the feature. In February 1958 Joe won twice again at New Smyrna Beach, winning the Paul Whiteman Trophy.

In March 1958, at Boca Raton, the car threw a rod in practice. The car was sent to Modena for engine repairs and it took a long time to be returned to Florida. This would be the start of Joe’s successful Porsche days. 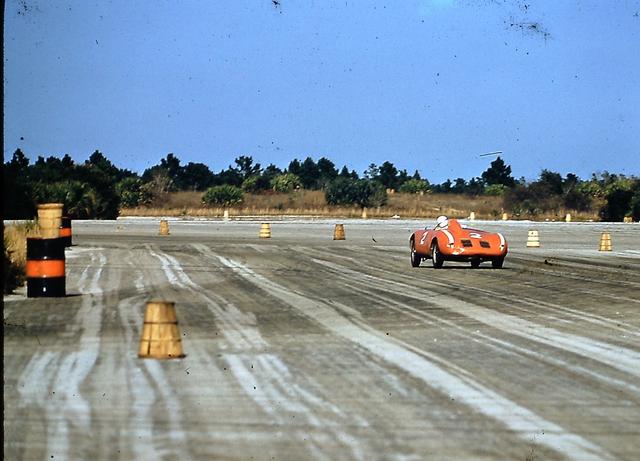 Cocoa-Titusville, February 1959 Joe Sheppard in his Porsche
The view that competitors would generally see when Joe Sheppard was entered. One of five Porsches that Joe raced in his career, the red 550RS with the white nose was bought from Johnny Cuevas. 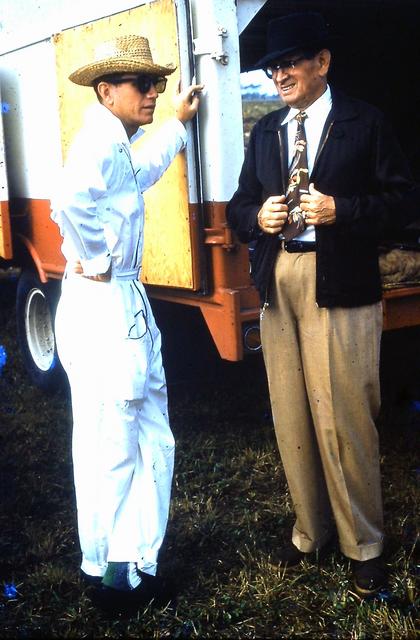 After Joe returned from the Korean War, he became interested in sports car competition. He asked his dad to buy him a Lotus Nine. Jack picked up the phone, calling Colin Chapman, and that is how it all began. 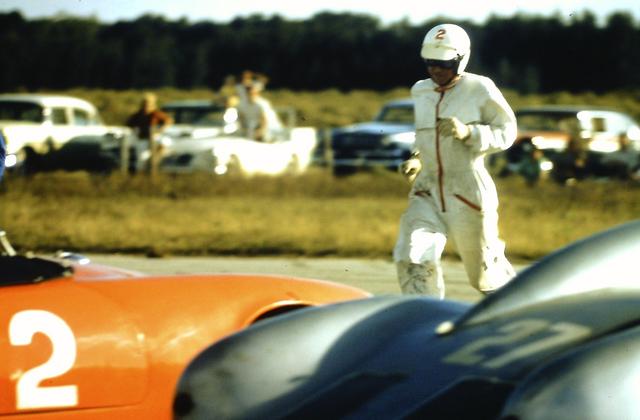 Dunnellon, Florida, in November 1958. Joe taking the Le Mans start of the 2nd Dunnellon Park Road Races. The silver Porsche next to his #2 belonged to Roy Schechter. 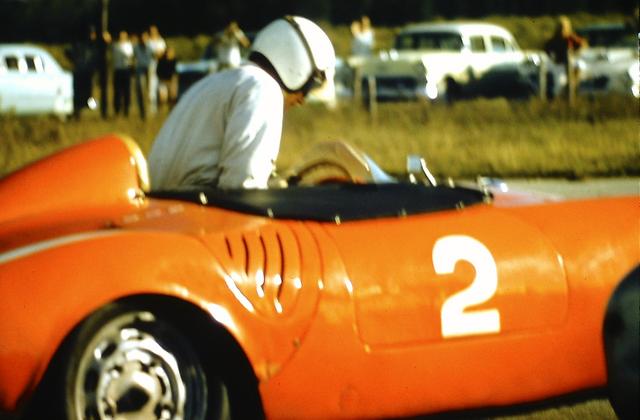 Dunnellon in November 1958 was not one of Joe’s better race weekends. Although he finished second in the prelim behind E.D. Martin’s Ferrari 250TR, in the feature he suffered two flats. In both cases it was the left rear, while nobody else had any tire problems. Lucky Casner won in Jim Hunt’s 250TR, while Joe brought his Porsche home in eighth place. 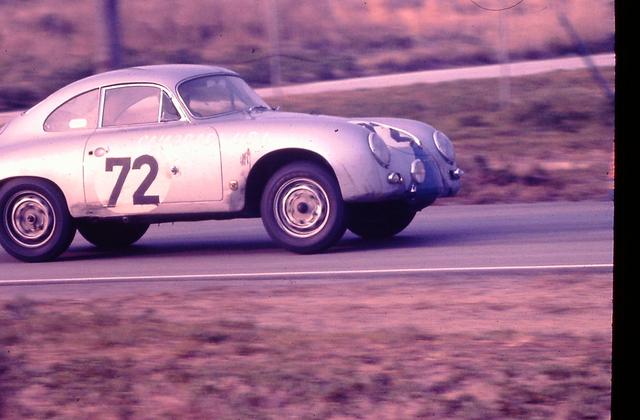 Another shot of the Porsche Carrera that Joe and Dick Dungan took to ninth overall at Sebring in 1960. 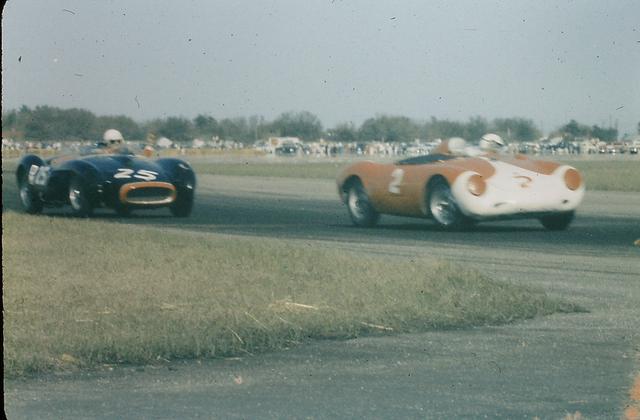 Pensacola, Florida in April 1959. Joe Sheppard battling Alan Connell and his 250TR. Connell spun out and despite setting fastest lap to make up ground, he had to settle for third behind the Porsche. 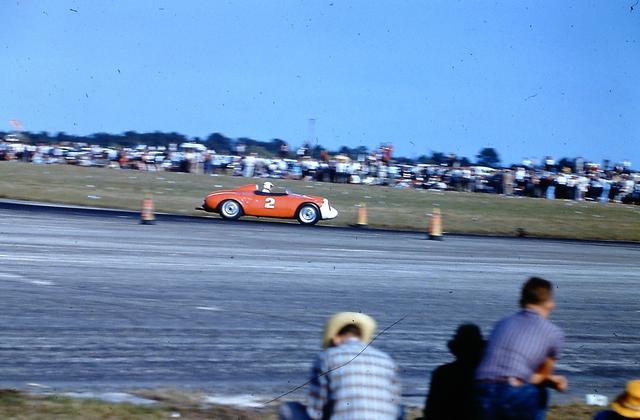 Pensacola, April 1959. The Fiesta of Five Flags event was an SCCA National. Joe Sheppard was only beaten by the powerful Ferrari 315S of feature winner E. D. Martin. 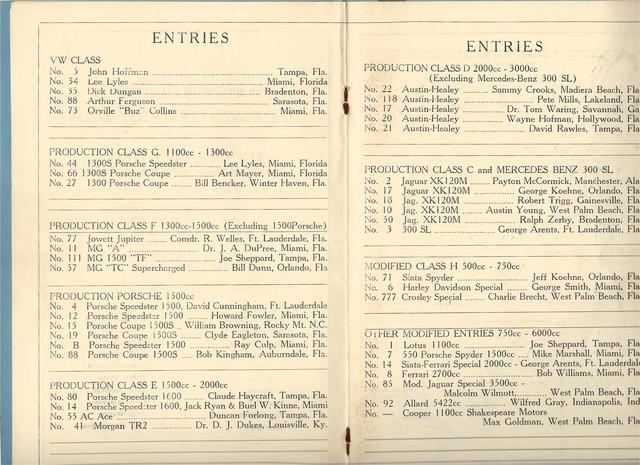 The entry list for the 1956 Punta Gorda races in Florida, where Joe Sheppard had entered both his MG-TF and his Lotus Nine. 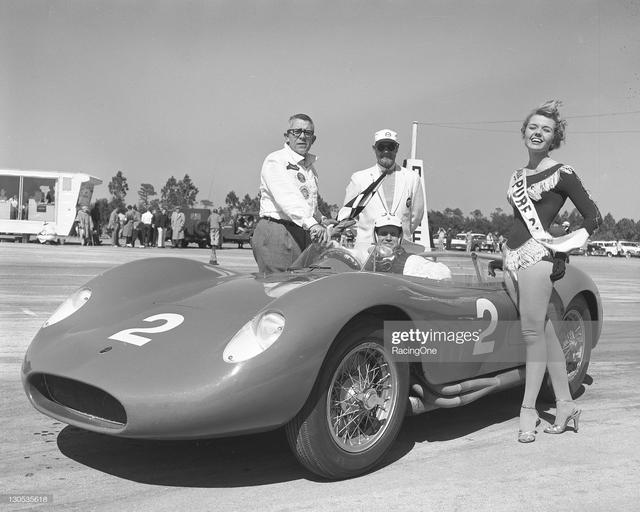 Joe Sheppard in his Maserati
New Smyrna Beach, Feb 1958.Joe is being congratulated by chief starter Jesse Coleman and the Lovely Trophy Queen. 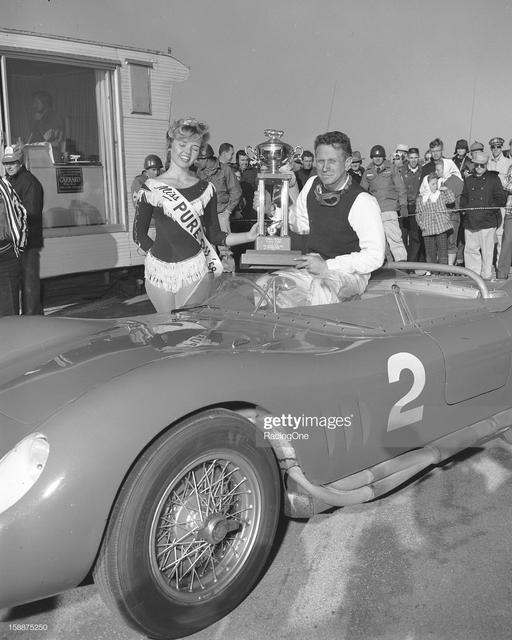 Another photo with Joe Sheppard and the Lovely Miss Pure Oil 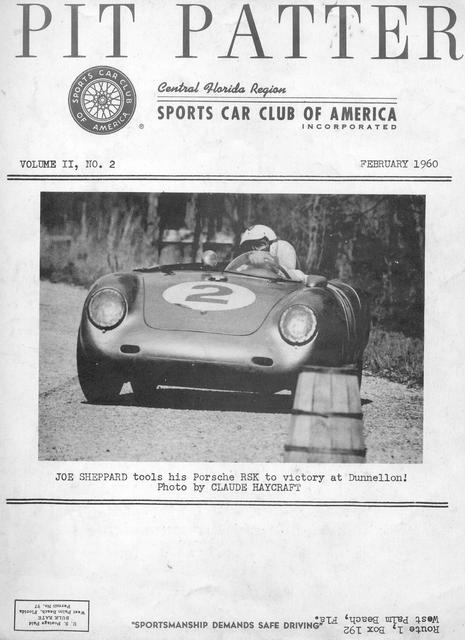 The February 1960 issue of Pit Patter, the magazine of the SCCA’s Central Florida Region, featured Joe’s silver Porsche 550RS at Dunnellon in January that year. Jack Sheppard had bought the car new at the factory and Joe never put a scratch on it during competition. 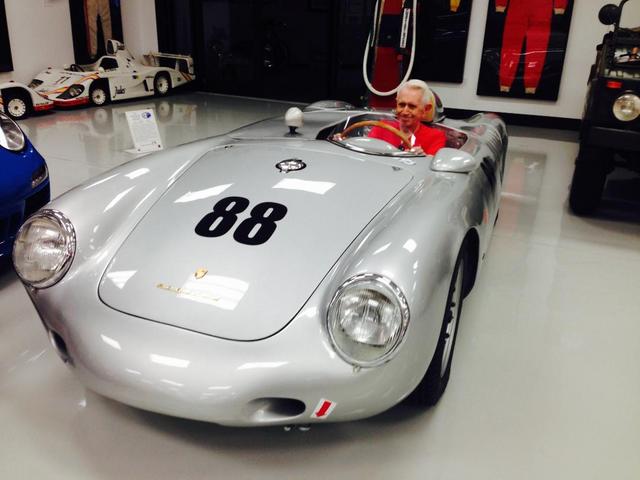 Joe Sheppard’s friend Jack Shea went the extra mile to get Joe back in a Porsche 550RS. This one belonged to the Carlos D. Quesada Collection, although not the one Joe raced many years earlier. A drive in a new Porsche 911 provided by Reeves Porsche in Tampa, with the sales manager’s son in the passenger seat, let the son comment afterward: “Boy, that man can drive!” 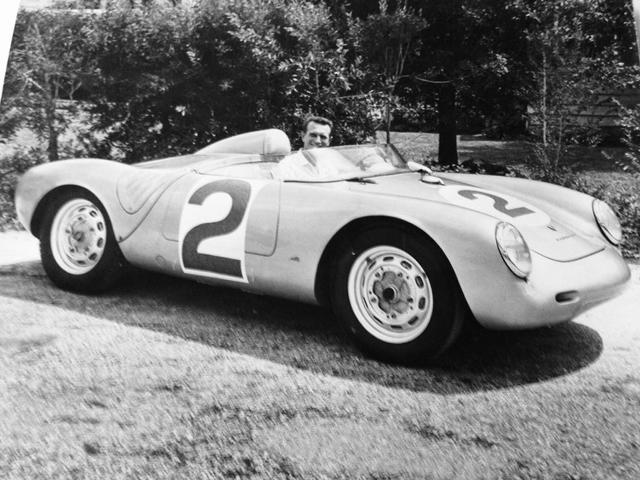 The silver 550 that Joe campaigned has an interesting history. Serial # 0144. It originally was to be sold to Jean Behra but his death led it to be set aside within
the factory racing dept. Fritz Schidel , Joe’s German born factory trained mechanic knew about 0144 just sitting idle. After hearing about the car, Joe’s father contacted
Porsche and made arrangements to purchase it for Joe. Photo is of it as it arrived in Tampa. The # 2 was utilized on just about every car during his career. 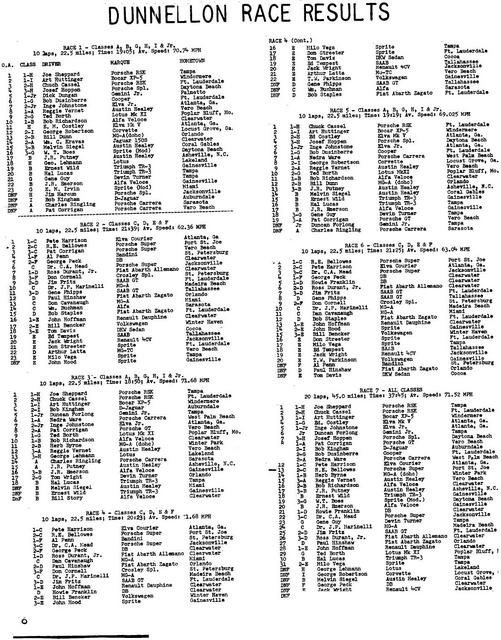 As the results show, Joe won every race he entered with the 550RS in the 4th Dunnellon Park Road Races in January 1960. 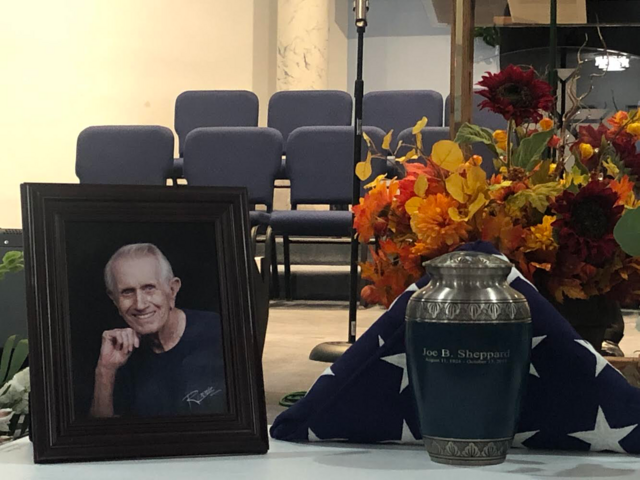 Jerry and Willem, thank you, great thread and tribute. I'm sure this was posted somewhere here at some point, but I thought I'd include this link.