More sad news from the BRDC, this morning...

We very much regret having to inform Members of the death of Andrew Cowan who passed away on 15 October at the age of 82.  He suffered a stroke a while back but it was the effects of a recent fall which ultimately proved fatal.

Born into a Scottish Borders farming family, Andrew’s enthusiasm for cars led to him joining the Berwick and District Motor Club where he soon befriended fellow young farmers and near neighbours Ian Scott-Watson and Jim Clark. As was customary in the 1950s and ‘60s family cars were pressed into all kinds of motor sport activity from races to rallies to hillclimbs and autotests. Andrew began with a Volkswagen Beetle which gave way to his mother’s Sunbeam Rapier which Andrew self-tuned and took on the 1960 RAC Rally, finishing 43rd out of 177 starters in his first international. Andrew’s father was suitably impressed and provided him with a brand new Rapier, beginning a long association with the Rootes Group. After winning the International Scottish Rally in 1962 and 1963 with his own car, Rootes stepped in with the offer of a factory rebuild for the Rapier and a contract.

It was not all about Rootes at this time, Andrew being offered a seat alongside Peter Procter in a factory-backed Alan Mann Racing Ford Mustang in the 1964 Tour de France Automobile. With Andrew driving the hillclimbs and Peter the circuits, they won the Touring Car category. David Murray’s Ecurie Ecosse, always keen to give a helping hand to promising young Scottish drivers, gave Andrew the chance to drive its mid-engined Tojeiro-EE GT in a handful of races in 1965 with best results being a win at Silverstone and a couple of second places at Ingliston. However, it was a couple of 1-litre Formula 3 races at Snetterton and Goodwood over the 1966 Easter weekend in a Team Lotus Type 41, at the instigation of his great friend Jim Clark, that convinced Andrew that his future lay in rallying rather than racing although 10th place at Snetterton in a very competitive field was not unimpressive.

Rootes products which were rallied in the mid ‘60s ranged from the muscular Sunbeam Tiger to the diminutive Hillman Imp but it was with a rather less obvious vehicle, a Hillman Hunter, that Andrew achieved worldwide recognition when he won the first London to Sydney Marathon in 1968, three up with Brian Coyle as co-driver and Colin Malkin as third man. Nine years later, Andrew won the second running of the event, over a rather different route which included a challenging, right round Australia section , this time in a Mercedes-Benz 280E, with Mike Broad ‘on the maps’ and again with Colin Malkin. In between Andrew won the International Southern Cross Rally in Australia in 1969 and then five years in succession (1972 to 1976), New Zealand’s International Heatway Rally twice (1972 and 1976) and the International Bandama Rally in the Ivory Coast (1977). One of the most gruelling of all was the 1978 South American Marathon, covering 18,500 miles as it visited all corners of this continent from which Andrew emerged as the winner in a Mercedes-Benz 450SLC.

Despite several attempts, Andrew never won the East African Safari. He was leading in 1976 when he was forced into a mud hole to avoid another car and the time lost dropped him to third, his best ever finish. He was fourth in 1977 and 1979. Also in 1977 Andrew won the Guild of Motoring Writers Driver of the Year Award, the Jim Clark Memorial Trophy for outstanding achievement by a Scottish driver and the BRDC’s John Cobb Trophy.

It was after the 1971 Southern Cross Rally that Andrew was approached by Mitsubishi, beginning a relationship which worked so well that it lasted 30 years.  In 1983, the year in which he won the Marathon class for production-based vehicles in a Mitsubishi Pajero SUV on his first attempt at the Paris-Dakar marathon, Andrew set up his own preparation business which soon became Mitsubishi Ralliart Europe of which Andrew was initially European Team Manager for the World Rally Championship team. In 1997 he was appointed Motorsport Director for MRE which in 1990 was responsible for the Mitsubishis in the World Rally Championship. With the extraordinarily talented Tommi Makinen as the teams’ principal driver – the Finn won 22 World Championship rallies for Mitsubishi – the team won the driver’s World Rally Championship from 1996 to 1999 and finished second in the Manufacturers’ Championship in 1995 and 1996 before winning the title thanks to the late Richard Burns in 1998 who won the East African Safari, the RAC Rally and in New Zealand.

As a rally driver, Andrew did not qualify for BRDC Full Membership although in 1977 the Club did present him with its John Cobb Trophy for outstanding success by a British driver. Some 20 years later, in 1997, proposed by Peter Procter and seconded by Eric Liddell, Andrew became an Associate Member.

In 2003 Andrew sold his interest in Andrew Cowan Motorsport, around which Mitsubishi Ralliart Europe had been based, to the Japanese manufacturer and retired to his arable farmland in the Scottish Borders. He retained his interest in rallying by acquiring and restoring the Hillman Hunter with which he had won the London to Sydney Marathon and for which he will always be remembered as one of the giants of marathon rallying.

Apart from the 1968 London-Sydney, the Southern Cross rallies were a good reason for Andrew to be very well-known in Australia...

We haven't seen him for a long time, but I know there are many here who will be thinking of him at this time.

Sad News,John Bryson,his navigator in the Southern cross Rallies will be upset.

I can always remember seeing him in a couple of his Southern Cross wins, unfortunately disposed of the pics long ago!! Reunited with Freddie 'the winch' Gocentas .....

Sad news.  One of the bastions of British rallying, both behind the wheel and behind the team.  He will be mostly remember for the Marathon win, but his versatility as a driver and his success in building up Mitsubishi from an odd-ball Japanese marque into the greatest force in rallying show the depth of his talents.

I very great man in rallying, he had such a strong link to Mitsubishi, both with driving and then as a manager and the Ralliart linkup.

Also used to do the odd event still, which is something I always liked.

Possibly not the strongest on what most would call normal rallies, but certainly one of the very best at the long distance and Safari type events. And could drive just about everything!!

He did for Mitsubishi really what Colin and Prodrive did for Subaru, so much so that both marques were able to sell thousands of cars they might normally sell as a result of wins and the like, still now the Lancer is the go to GpN car, despite not being made for years and Lord knows how many Evo's have been on stages, I would expect a huge percentage!!

Yet they could so easily have built a pup like the Sunny GTiR and not had all of that, so easily done back then. I would like to think Andrew and his team helped that along 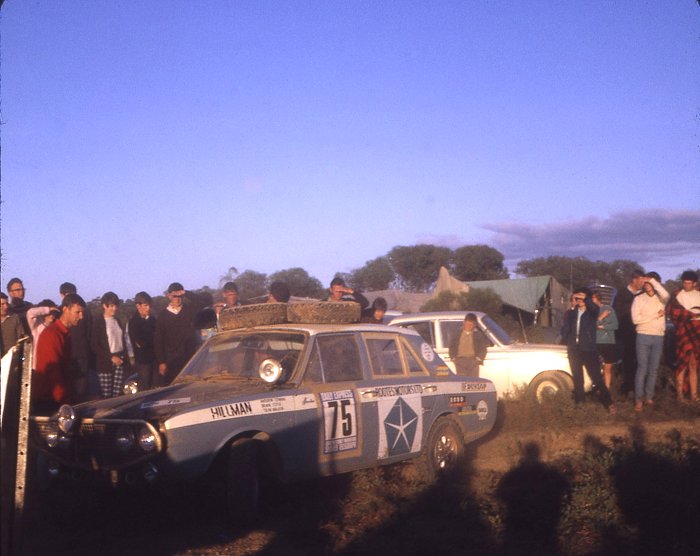 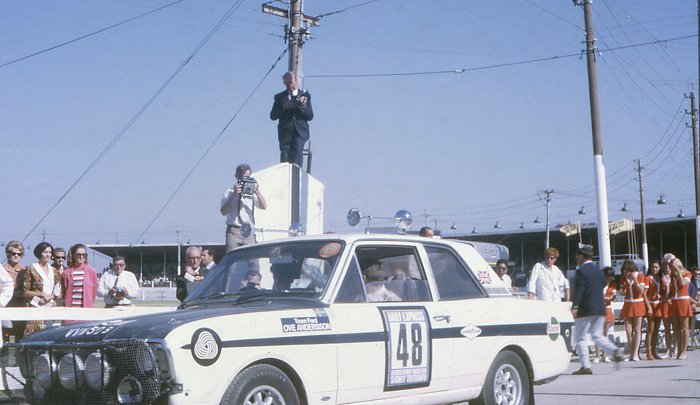 R.I.P. Andrew!
Thanks for your historic Tour de France rally win with the Alan Mann Mustang DPK-7B .
You did prove the new Ford Mustang family car was "Sporty" indeed.
You always will be a hero for me. THANKS! 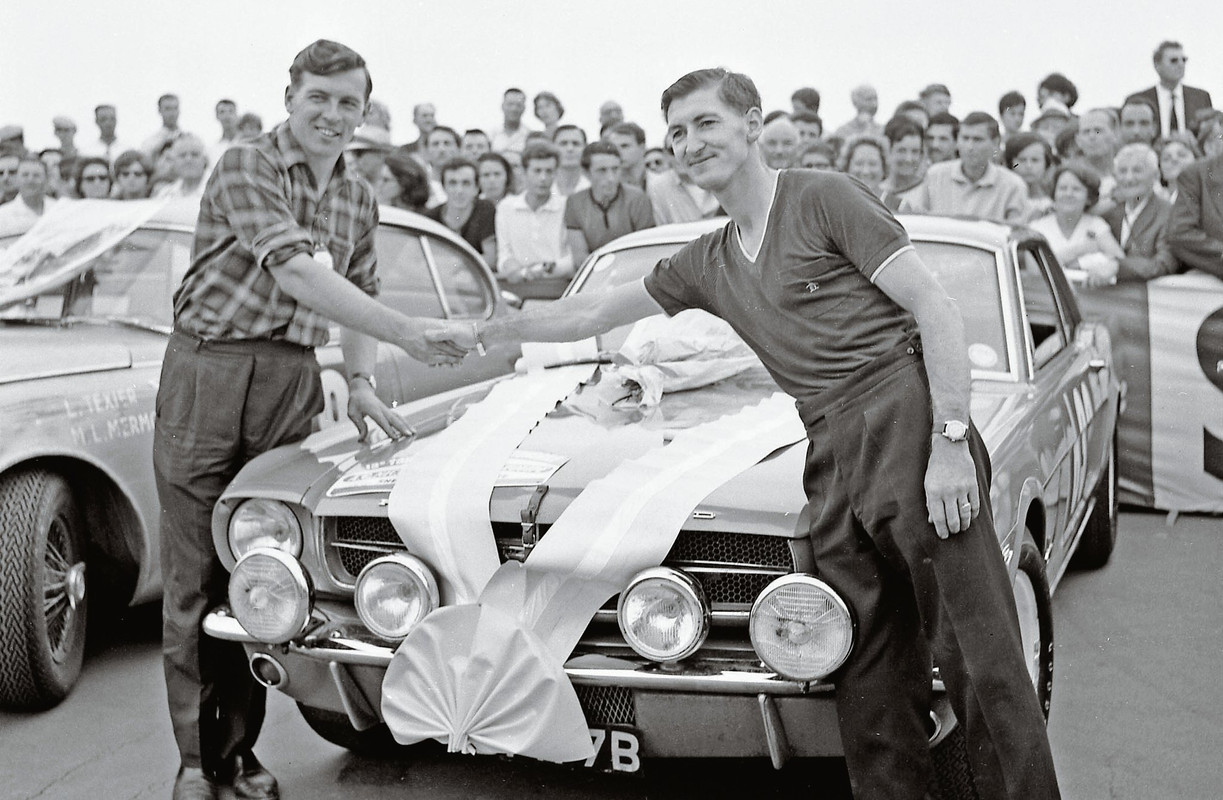