26 replies to this topic

Sorry to report the passing of that great motor sport character and enthusiast, and man of many other parts, Keith Schellenberg, who died on Monday.

The former Laird of Eigg, and placed 25th in the 1964 Olympic Luge, he was certainly larger than life. Driver of an AC Cobra in period, and a VSCC stalwart first with Riley,and later with the Barnato-Hassan Bentley, also taking part in the 1968 London-Sydnety Marathon in his 8-litre Bentley, with Norman Barclay and Patrick Lindsay.

I suspect we will never see his like again. RIP Keith

Yes , a somewhat larger than life figure who I often used to see at Croft . I confess he was so old school toff that I thought he'd probably left us years ago

As John says, larger than life. One of the characters in club racing in the 1950s/60s not just in the Barnato Hassan but in a C type Jaguar inter alia. At some time he owned the yacht formerly the property of Kaiser Wilhelm II.

In 2004, when the VSCC celebrated an anniversary based in Harrogate, we were able to visit Keith's home and motorhouse on one of the events - and meet the sociable and interesting man himself.

As mentioned above I thought he had died long ago, RIP Keith.

He also had an ERA (R6B) in the 1950s. He was a prominent figure in the 1950s motor sport scene in the North East of England being one of the founders of Catterick Hill Climb along with Alan Ensoll and my father, who was stationed at Catterick at the time with the Royal Tank Regiment.

RIP Keith. Great memories watching you battling the Napier Bentley and Bugattis in the Barnato, and aviating it at the top of the Brooklands Test Hill!

I think it was R14B, Dutchy, which he owned briefly with Norman Barclay

Many,many years ago, I was rounding Malden roundabout on the A3 Kingston by-pass in my Cooper S 970cc, when a vintage Bentley came round behind me.  I accelerated away thinking that an old crock like that was nothing to worry about only to be comprehensively burnt off by the Bentley.  Driven by Mr Schellenberg, who waved in what I hope was a friendly, rather than derisive, manner. Definitely an old school eccentric, of the sort now in short supply.

Sorry to report the passing of that great motor sport character and enthusiast, and man of many other parts, Keith Schellenberg, who died on Monday.

The former Laird of Eigg, and placed 25th in the 1964 Olympic Luge, he was certainly larger than life. Driver of an AC Cobra in period, and a VSCC stalwart first with Riley,and later with the Barnato-Hassan Bentley, also taking part in the 1968 London-Sydnety Marathon in his 8-litre Bentley, with Norman Barclay and Patrick Lindsay.

I suspect we will never see his like again. RIP Keith

I was working for H. R. Owen in 1968 and we had the Bentley in Owen's small service, clean up and general prep, tax discs etc., for Astons, Rolls Royce/Bentley et al at Pavilion Road, Knightsbridge London.

It was a seriously large and impressive car that was having a problem which I cannot recall now which was attended by somebody that might have been the Hon Patrick Lindsay but the passage of time has long since abandoned me. 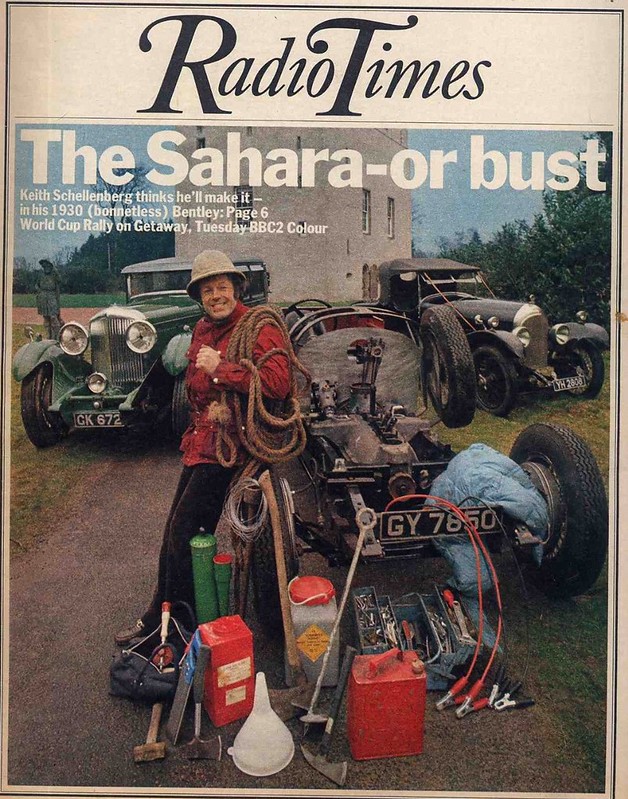 As John says, larger than life. One of the characters in club racing in the 1950s/60s not just in the Barnato Hassan but in a C type Jaguar inter alia. At some time he owned the yacht formerly the property of Kaiser Wilhelm II.

In 2004, when the VSCC celebrated an anniversary based in Harrogate, we were able to visit Keith's home and motorhouse on one of the events - and meet the sociable and interesting man himself.

Keith Schellenberg, did indeed buy the steamship Scharhörn, originally Schaarhörn, in 1976 and it's an interesting story. The vessel was originally built as a survey ship, though with various added semi-luxury features to make it suitable for other duties as well. I've often seen the boat  described as "Hitler's state yacht" as well as the Kaiser Wilhelm connection that Allan mentions, though both tales appear to be a myth, there's no evidence that either men ever even saw the vessel, let alone set foot on her decks. I found the information below in a German publication. The North Sea voyage sounds like an interesting trip, though it's not told whether KS was on board.

... in those days, a Scottish millionaire appeared on the scene, bought the old steamer in 1976, and patched her up for her most adventurous voyage ever. Going to England, the SCHAARHÖRN got into bad weather, waves were five meters high, sea water flooded the engine-room, coal ran low. After 75 hours, the English coast was finally reached the UK. SCHAARHÖRN sailed into the small Scottish port of Buckie, where the voyage ended. Well-kept at the beginning, the SCHAARHÖRN then gradually rotted away in a remote corner of the port. Vandals destroyed the furniture, thieves took away everything they could carry. In 1979, SCHAARHÖRN in her pitiful state was purchased by two enthusiasts, who repaired her so she could be taken to Maryport in Cumbria, where she was laid up again for some years. 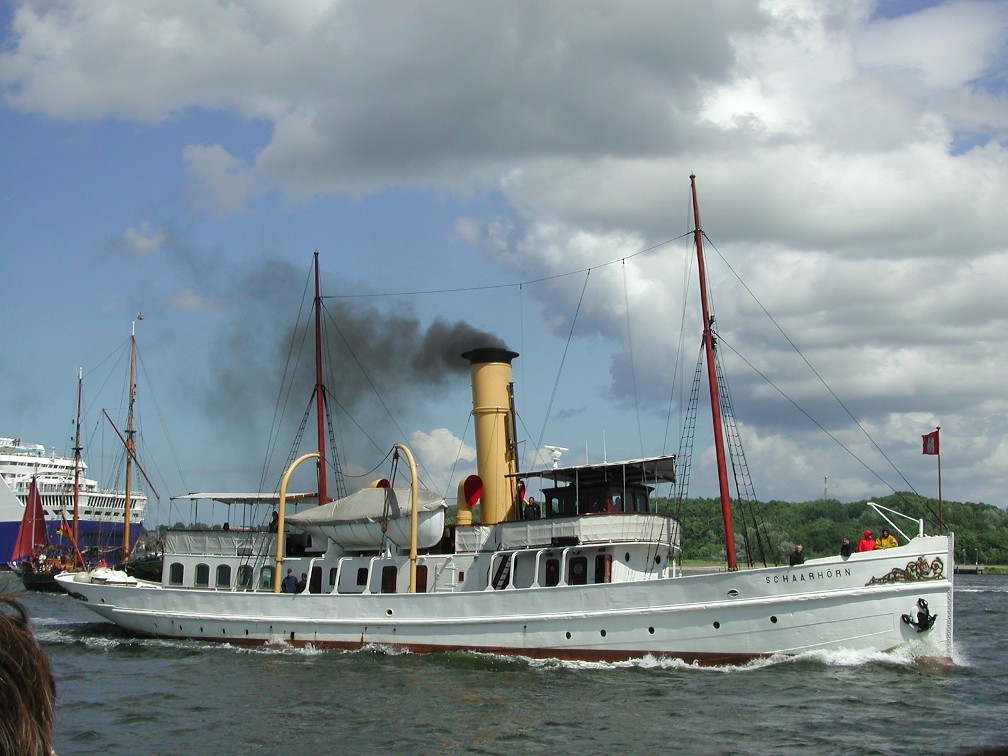 As far as I know, Scharhörn was eventually properly restored, and returned to its original home in Hamburg. It was still sailing happily along the Elbe until quite recently, though it may now be enjoying a well earned retirement ashore in the care of a German voluntary organisation, on a short visit to Hamburg around 2010, I could not find any sign of the vessel. As originally built, and in Keith Schellenberg's time, Scharhörn was powered by a pair of  coal-fired triple expansion steam engines, which makes the voyage to Buckie even more of an achievement, it must have all been quite exciting, I'm glad I wasn't on board.

A real character and I well remember him from the various VSCC meetings that I attended long ago, as Alan alluded to at the start of this notice. If he was entered it was always well worth looking out for him and whatever he was racing.

I too thought he had passed away some time ago, but we are running out of characters like Keith.  Very sad and I fear we are not capturing their experiences and thoughts in some way.  With all due respect, it is never best to write someone's biography after they have died.

But can you imagine the races they are having wherever it is we end up...?!   RIP.

An entertaining personality, I suspect there are not many more like him coming down the line. However, regarding his ownership of the island of Eigg, let's just say there were "issues". Fortunately all sorted out, all these years later.

I saw Keith racing at my first visit to Croft in 1965, where he drove a Cobra, Mustang and vintage Bentley - an impressive combination.

I had a vague idea in my mind of a link between him and de Portago and his death prompted me to look further. It turns out that they were friends brought together through competing at the Olympics bobsleigh event. After de Portago's death in the 1957 Mille Miglia, his family offered Keith his Tour de France winning Ferrari 250GT, but he felt he couldn't accept it as a gift, so made an arrangement to buy it. There's a good article by Graham Gauld which gives the full story:

Use Irfanview if you need to change the extension...

Open the pic, click on 'save as' and then change to a .jpg file type.

Keith pops in at the start of the 1993 London Sydney Marathon. See my vid below...

I must admit I thought he had died some years ago. There was a bit of a scandal about him some years ago when he was round cruising in a red light district and the case was dismissed due to his dementia if I remember right.

Interesting the yacht getting to the "English" coast near Buckie!   When it came down here to Cumbria it was to be part of a  ship museum in the revamped Maryport harbour. There were I think four boats but there was never enough funding and all the boats kept getting vandalised by the local yobs. All were sold off about 15 years ago.

He was also involved in Drag Racing in the early days

My local paper, the Darlington and Stockton Times  , has a long , nearly full page obituary on Schellenberg today. If anyone wants it pm me and I will put it in the post .

A quite interesting full page Keith Schellenberg obituary in The Times yesterday. The content was interesting on his social life, and it briefly mentions his crossing from Hamburg to Buckie over a stormy North Sea in his newly acquired steamship Scharhörn, though it's a little disappointing that the paper couldn't manage a proper ö in order to spell the vessel's name correctly, Scharhörn, originally spelled Schaarhörn, is a small island off the mouth of the Elbe. This episode in Keith's life is dealt with in just a single sentence, and I'm surprised that the storm conditions, and the fact that vessel had to have its boilers stoked continually with shoveled coal throughout the rather bumpy voyage wasn't mentioned. We are told though that Keith spent the trip on the bridge, stylishly dressed in the uniform of an admiral in the Imperial German Navy. Sadly though, it perpetuates the entirely untrue claim of a Kaiser Wilhelm connection, though fortunately, they didn't compound the error by adding Adolf Hitler's name to the Kaiser's, as I've seen in the past.

From the obits I've read (Times and local N Yorkshire paper) he sounded like the sort of chap his friends would describe as 'larger than life , life and soul of the party ' etc but to humble civilians like me (and many residents of the Isle of Eigg )he appeared  an  overbearing and privileged ****. See also Alan Clark - but at least he wrote  beautifully . ,

There was very little in the programme on his motor sport career - only a brief mention of his driving his Bentley in the 1968 London-Sydney rally. They said he retired due to a broken back axle, whereas the car actually fell down a ravine when the road gave way due to the car’s weight, and was essentially undamaged when finally retrieved.

A special person indeed (see the post hereunder from Bakeryman).
Another racer/owner of one of the Alan Mann Mustangs passed away.
R.I.P. Mr. Schellenberg...