Can anyone help me with some background on this subject?

In 1967, Frank Stark approach BRM via his old friend Raymond Mays with a proposal to build a bifurcated port cylinder head for BRM's H16 F1 engine.  This was considered alongside a 4-valve head project being conducted by Amherst Villiers and an in-house 4-valve project led by Tony Rudd.  It was not Stark's first involvement with BRM, as his company had been involved in a project in 1964 in which Stark clearly felt BRM had not treated him properly.

This Leander cylinder head was built by C. J. 'Jack' Williams, formerly head of the competition and development department of Associated Motor Cycles, who had later worked for Bristol Siddeley until his division was closed down after the Roll-Royce takeover.  He was apparently in demand from Lotus, Brabham and John Surtees - at least according to Stark.

Leander had done some work on a 4-cylinder Lotus-Ford 1600cc engine, which was apparently very promising, but the head they did for one of BRM's F2 P80 engines in November 1967 gave 10% less power than a standard P80.  Leander took it away to work on it, but I have not yet located the box in Rubery Owen's archives that will tell me what happened next.

I have been trying to google more about this company and its principals, but keep hitting references to that much better-known American engineer Tony Stark, who I am confident is unrelated.

If you look at the Frank Stark patent GB1033551 (you can download it here: https://worldwide.es...R=1033551A&KC=A ) filed in 1964, you will see that he is describing three embodiments of a desmodromic valve mechanism which he is claiming allows the valve to be driven harder and thereby allows improved breathing and volumetric efficiency than spring-returned valves (I think that you will find that not everyone agrees with that position).

Figure 4 shows the bifurcated inlet port that you mention, presumably to exploit the improved time/area opening achieved with his mechanism.

Figure 1 in conjunction with his later, 1968 patent US3557766) suggests that he was a believer in a wide 90° valve included angle, probably to accommodate the bifurcated ports.

Ah, very interesting.  I have pulled out that Fig 4 and pasted it below, as I found it a bit hard to access.

In the last correspondence I saw, Stark was saying that BRM's cams were holding the valve open longer that Leander had expected, and this might explain the poor performance.  They were intending to revise the cam.  Reading between the lines of Tony Rudd's report, Leander might have underestimated the work already done by BRM with Shell on maximising this sort of efficiency. 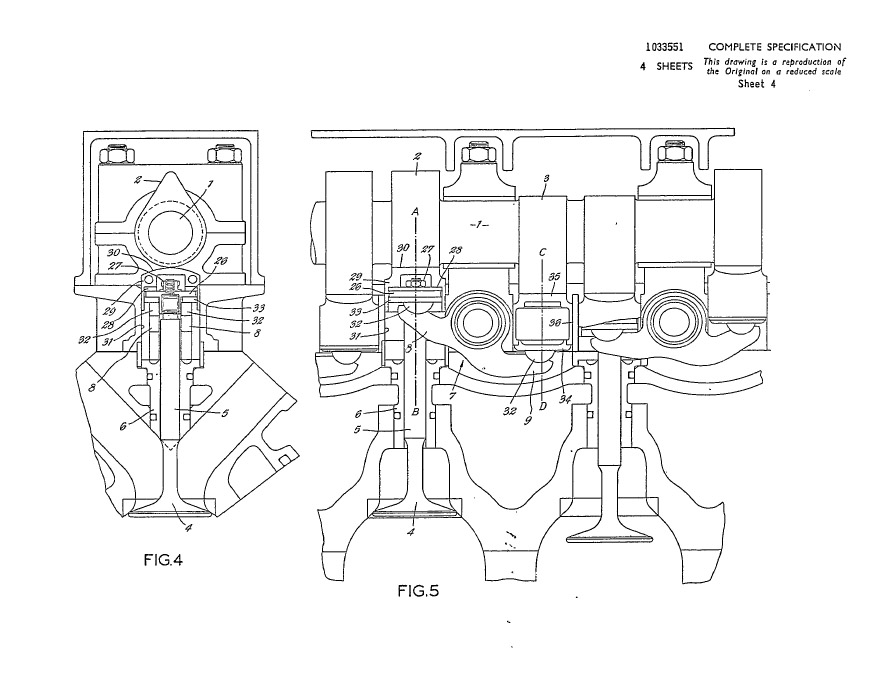 Anyone have anything else on Frank Stark's career?