I've recently been contacted by some family members of Les' in Hong Kong and they would like to know more about his life and times in England before he moved out to Hong Kong in the '70s. My late mother was very good friends with his first wife Doreen, but I don't have any way of contacting her.
Unfortunately all I know is what I can find on the internet (so not always trustworthy!!) and I wondered if anyone had any other information on his war time, his jazz music, his shortish and very successful racing career, where he lived and of course his very successful business - it seemed every race car in the '60s and '70s had a Les Leston steering wheel!!

I hadn't realised until I searched online that he was also a BBC pit lane commentator for the Grand Prix in the '60s, so anything on that would be interesting also and it sounds like his life in Hong Kong was very interesting also?!
If it helps jog a few memories, I found this fantastic article on the 500 Owners Association website http://500race.org/people/les-leston/ and also below is his obituary from The Telegraph:-

Les Leston, who has died aged 91, was a motor racing driver, jazz musician, broadcaster and businessman who enjoyed great success on the track before building a successful automobile merchandise business.

One of the true characters of British motor racing in the pioneering decades of the 1950s and 1960s, Leston was crowned British Formula Three champion in 1954, drove in three Formula One Grand Prix and was a regular victor in various track classes, winning more than 160 races in all formulas.

Perhaps his greatest contribution to motor racing, however, came after his retirement from the track, through his pioneering of flameproof equipment and state-of-the-art helmets for drivers. He was the first businessman to market flameproof overalls and gloves at a time when burns were one of the primary causes of death and injury among drivers.

He was born Alfred Lazarus Fingleston at Bulwell, Nottinghamshire, on December 16 1920, to Henry and Kay Fingleston. Henry, known as Monty, was a fourth generation immigrant from eastern Europe. A coal merchant and general trader, he moved the family to London in the mid-1920s, and in 1927 he anglicised the family name to Leston, becoming Harry Leston while his son became Les.

Aged 16, Les took part in the Battle of Cable Street, fighting alongside fellow Jewish residents of the East End against police and members of Sir Oswald Mosley’s Blackshirts.

By this time he had taught himself the drums, and at 17 he was playing with three successful big bands, including that of Bert Ambrose (Ambrose was credited with discovering Vera Lynn).

Leston also played with The Clay Pigeons, the band led by Belgian trumpeter and racing driver Johnny Claes, and in 1940 he was billed as “Britain’s best jive drummer”.

His showbusiness career was cut short by the war, when he served as a mid-turret gunner in Lancasters and rose to the rank of sergeant.

He flew in the so-called “Thousand Bomber raids” over Germany in the summer of 1942; owing to illness, he missed one raid during which the entire crew was lost.

Before another mission, to Berlin, he inscribed a 4,000lb “cookie” bomb “Greetings from Archer Street!” — a reference to the West End location where musicians would meet to socialise and seek work before the war.

After the war Leston and his father established a company trading in aeroplane spare parts. He began his motor racing career alongside contemporaries such as Stirling Moss and the future world champions Graham Hill and Jim Clark.

In the British Formula Three Championships, Leston won seven races in the 1952 season to finish runner-up. He also won the Luxembourg Grand Prix, defeating Moss in the Formula Three event, and was subsequently featured on the front cover of Autosport .

After challenging for the title in 1953, Leston became national champion the following year, winning eight times in a works Cooper and clinching the title in the final race of the season on Boxing Day. He also raced in three Formula One World Championship Grand Prix, the first in 1956.

Leston raced in the Le Mans 24 hour race and rallies, and in the 1960s enjoyed great success in the British GT Championships, driving a bright red Lotus Elite with the number plate “DAD 10” — a nod to the jazzman’s nickname “Daddio” by which he was known on the big band circuit.

The same name would later appear on his yacht, DADIO2, and finally on his coffin when he was laid to rest.

By the late 1950s, prompted by a major accident in the Grand Prix of Caen in Normandy, Leston had turned his attention to his accessories business. Initially specialising in “aftermarket” accessories such as steering wheels and gear knobs, he began developing flameproof equipment in the 1960s.

He had been inspired by an earlier accident, in which the half-shaft of a Connaught he was racing punctured the fuel tank, and he was burned as he leapt clear to escape the flames.

Motor racing in the post-war years was extremely hazardous, being administered by men whose concept of danger was shaped by their experiences in the First World War, and contested by men who, like Leston, were veterans of the Second.

So prevalent was the threat of fire that drivers competed without seat belts or harnesses, preferring to run the risk of being thrown out of the car in a crash to being trapped.

Leston’s products offered protection to drivers who were previously vulnerable to fire. He experimented by treating overalls with the substance used to make West End theatre curtains fire-retardant and then promoted new materials, Protex and Nomex.

Operating from a shop on High Holborn in London , Leston counted many of the greats of the sport among his customers, among them Jackie Stewart, Juan Manuel Fangio and Mike Hawthorn .

His innovations were promoted by powerful advertising, notably in a campaign supported by the driver Peter Proctor, horribly burned in an accident at Goodwood in 1966. Proctor allowed an image of his scarred face to be used in an ad that demonstrated the dangers drivers encountered.

Leston remained a feature in the Grand Prix pit lane, working as a commentator and interviewer for the BBC. During Monaco Grand Prix weekend he could also be found running a book in the Tip Top Bar, where he set up a blackboard and chalked up the odds.

In 1973 he moved to Hong Kong, where his accessories business continued to do well and where he presented a Sunday morning radio programme . He returned to England in the 1990s, settling in Kent.

With his first wife, Doreen, he had a son and a daughter. With his second wife, Ding Lu, he had another daughter . He had no children with his third wife, Kit.

Here are a few earlier threads about Les and his accessory business:

Funny you should raise this topic as I had been thinking about him in recent days, having seen this:

have taken over the Les Leston

and Autocrat accessory shops in

a surprise move to bring the

group's London interests up to 11

He was entered #4 on the Avon Motor Tour in 1974, Chevrolet Camaro, with Bob Ridgard.

Raced the Camaro, aged 53, in the Castrol Production series in 1973, close second to Stuart Graham at Oulton Park, 21 July 1973. Not so short career?

Leston was a regular at the Macau Grand Prix in the 80s/90s in his blazer. Was he in the B.R.D.C?

He was indeed a BRDC member - here’s their notice of death for him:

I know Les's son Nick, he is a some-time racer and also works as a plumber - I should know as he kindly fixed my boiler a few months back !

Nick has remained in Kent and was a childhood buddy of Damon Hill. The Hill connection with Kent was the Hill's holiday home - a beautiful Tudor house in the countryside near Brabourne - funnily enough I drove past it yesterday and smiled.

After the British GP at Brands Graham would invite the GP circus down to Lord Brabourne's estate at Mersham le Hatch for the annual cricket match. Les played in at least one of these games.

Cyril Linstone (Emeryson, his son Mark is racing historic F3 at the moment) knew Les very well and his wife Phyllis was Les's secretary, they will have plenty of memories.

If you don't have them you can find Mark's contact details through his Linstone Classics business near Salisbury.

Bob Ridgard was a South African.

Quite a programme - complete with winning driver autographs!

Motor Sport says: "Try as they did, Cripps in his four S.U., Chrysler-engined Cripps-Special and Leston in white helmet and a 2½-litre Jaguar with rather soft rear springs, never closed on Bartlett."

Leslie Onslow-Bartlett was a very talented engineer and driver. Study of his specials makes interesting reading. ISTR that Motor Sport , that is to say Bill Boddy, did a fine piece on him years ago.
Roger Lund

Les must be one of the last "geezers" from that era who have not had a book written about them.

We used to chat to him in The Woodcock in Iden Green either at the bar or at the next table in the dining area. He was great company.

"Les must be one of the last "geezers" from that era who have not had a book written about them."

I read somewhere recently...Octane, perhaps...that a book is is in the pipeline....

Posted on behalf of Weaverbird, with her text and captions:

Once Les was settled in Hong Kong, he started up his race accessory business with all his goods made in China. He had a terrific junk and whenever we went over to the Macau Grand Prix, he would take us out for picnics around the harbour. The favourite time was the year Gene Hackman came out - great time with Gene, his then wife Fay, and Chris (his son who was racing in UK) 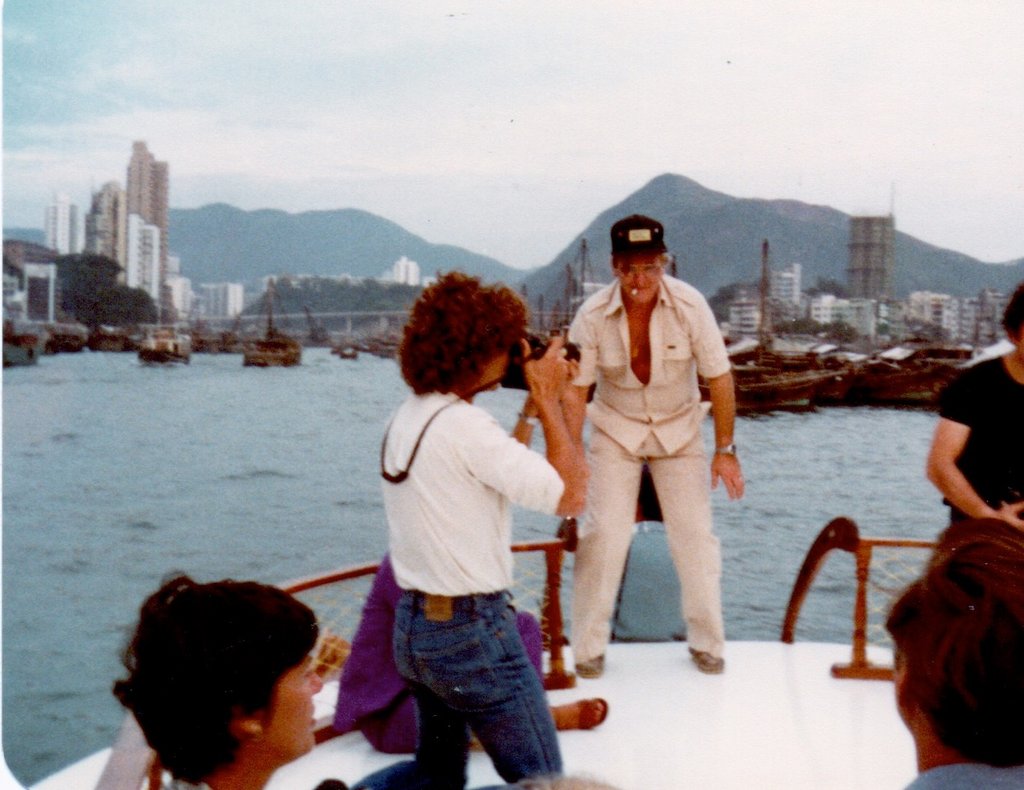 Chris Hackman - with Les getting his sea legs 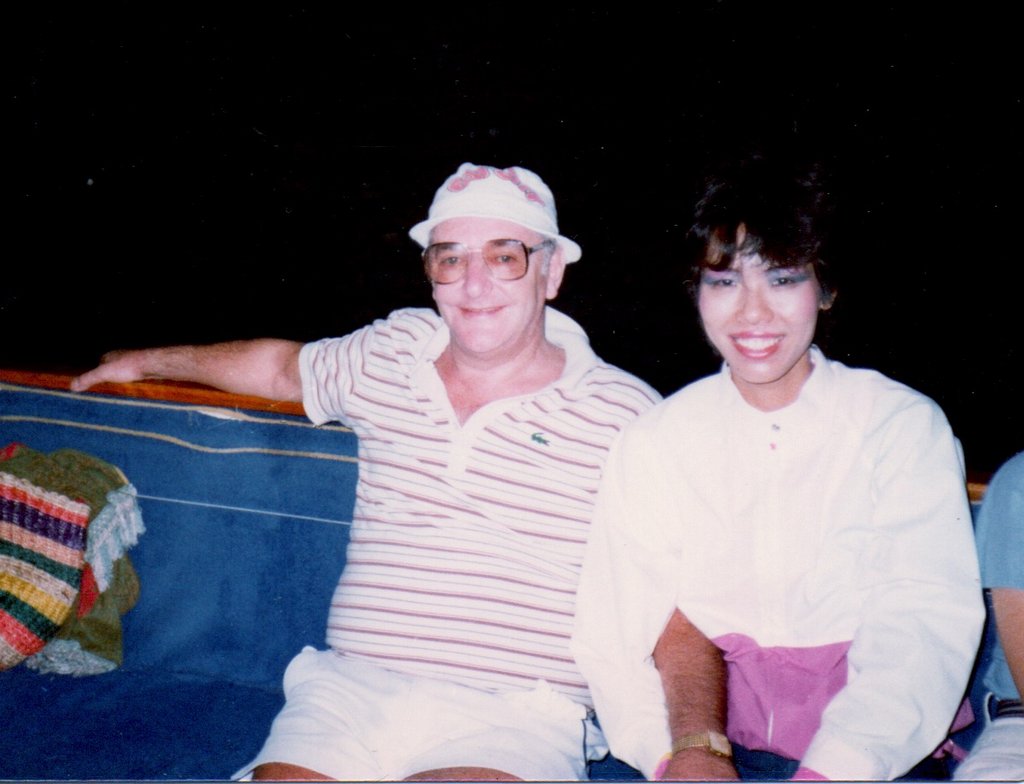 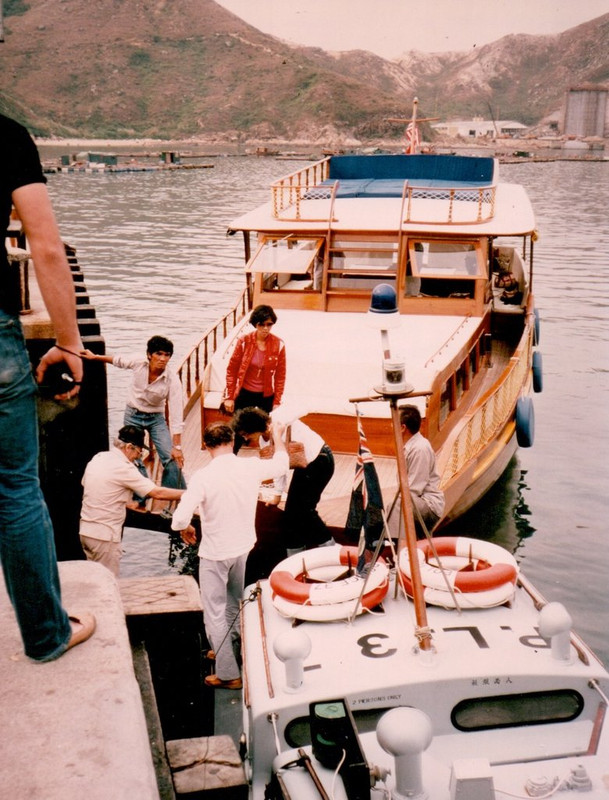 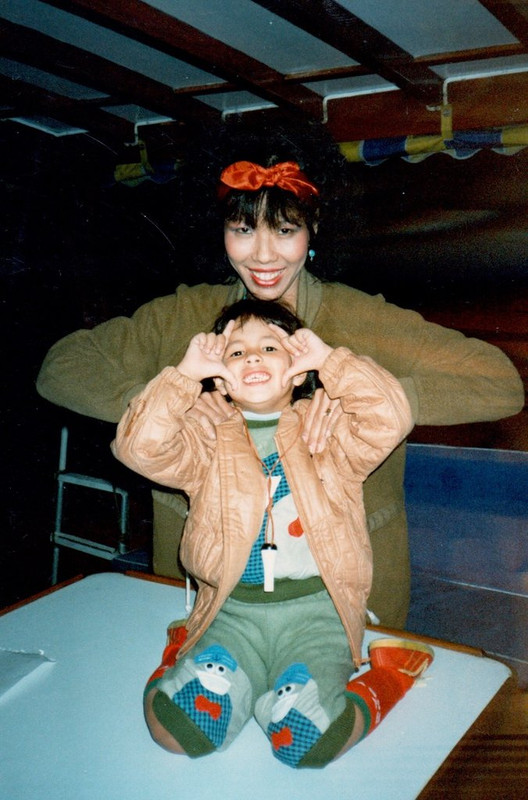 Ding Lue with their daughter 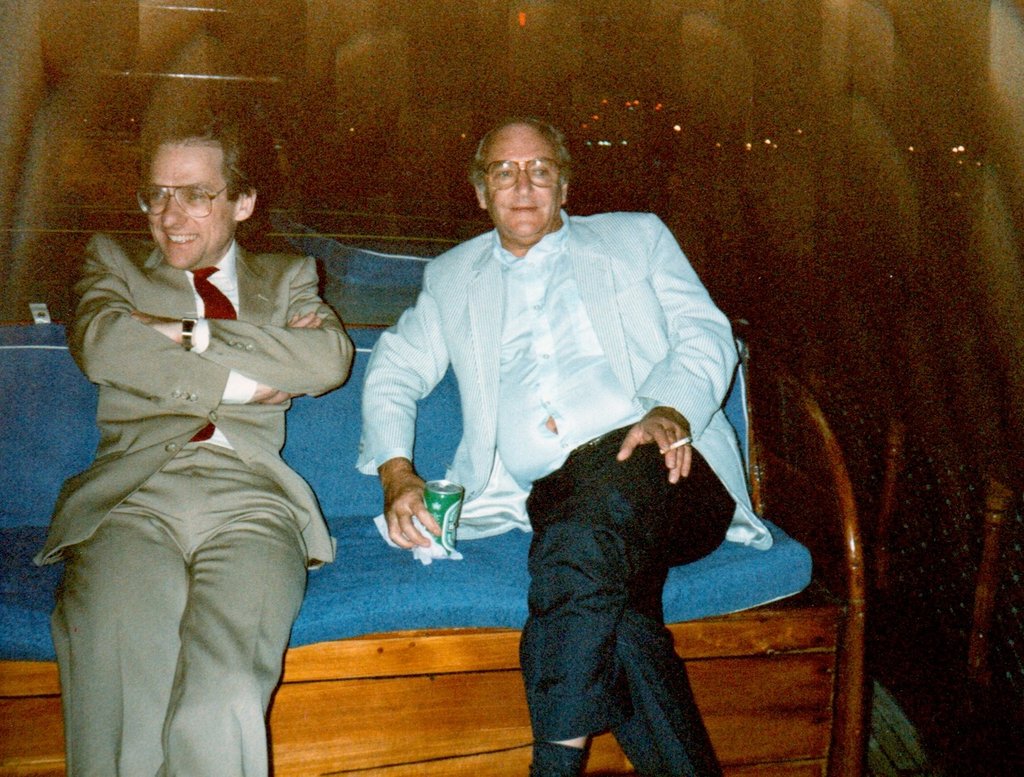 With Simon Taylor on board

(I also have photos of his son, Nick, who raced for a while and would be able to fill in any gaps for the forum)

WILLY MAIRESSE and Colin Davis, who

attribute their survival to their per-

which are manufactured exclusively by