I am currently making slot car models of the 4 SLRs. I have a foiled bare metal one, with the humpier front wings, the red one and the green one. I have also modified one into the shorter TR4 based car and thought it was green, but three photos I have off the 'net make it look like a slightly bluish grey metallic.  Can anyone confirm what it should be?  I thought it was a darker green than the "normal" one.

Probably no help at all, but this man-with-cheese-sandwich recollection from Brands in 1967 is of a dark murky colour, probably a greyish blue. Not sure which car it was.

Would be very interested in your slot car activities, Paglesham. Confessions welcomed.

Well, gents. Blue or white???!  And it differentiates twixt TR4 and Morgan versions, but I have never heard of a white one!  Pictures tend to show a slightly darker green than the Morgan based green one.  There has been, it seems, a replica built on a TR4 chassis and that seems to be the metallic greyish greeny blue, but that's not the one I want info on. In fact I have seen more pictures of green than owt else, so, because I ain't a patient man, I put a darkish green enamel over a nearly black self-etch primer and I like it.  Just different enough for the comparison twixt it and the "normal" green one. The others I have done in red and bare metal (using aluminium tape).  I have modified three of the four to better represent the different cars built, so the bare metal one has more curvaceous front wings and the TR4 based one I shortened and flaired the front wings a bit more.  The model is essentially the green Morgan based one (258 TOK). The others have slight mods to grille openings. I now have nice slot car models of each car built.

The models are a new release in resin from RS Slotracing in their British Sports Car series, all from my patterns. (My tally so far of slot car patterns is somewhere over 75)

No idea how to put pictures up on here. Why do some forums make it so difficult?

Thanks for your help, chaps.

No idea how to put pictures up on here. Why do some forums make it so difficult?


Martin, your photos have to be on a website, either your own if you have one or one of the image-hosting sites such as Postimage. There's a useful guide on how to use Postimage on the forum title page:

If you'd rather avoid all the hassle I'm happy to post them on your behalf - PM me to arrange this.

Here are a couple of Paglesham’s photos. He says that the first picture shows the three colours with the bare metal one being done with aluminium foil tape after increasing the bulbousness of the front wings. The red one is untouched and the green one is the TR4 based car with a shorter wheelbase and more faired front wings as the wheels on that one will be wider wires. The normal green one was just sprayed, so not in the picture: 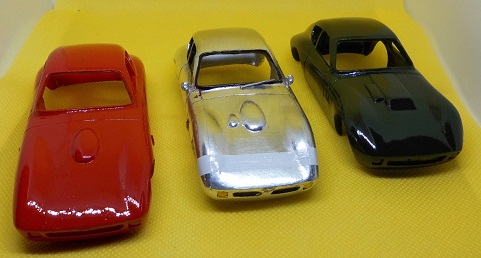 The other picture shows the bare metal just applied and the vacuum formed window patterns in their early stages. The models will be available from RS Slotracing and include interior tray and glazing: 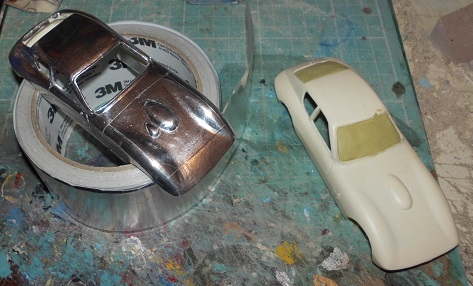 (photos posted on behalf of Paglesham)

Originally posted by Paglesham
....Why do some forums make it so difficult?

It's not so difficult, really...

Once you get the hang of it it becomes almost second nature. I'd imagine I've posted more than 8000 pics on forums by now and Postimage is easy, you can have separate folders for your pics there and you can go back through them easily if you want to repeat a posting.

There is just one forum I use which doesn't allow externally-hosted pics and I feel that posting pics there is more of a problem than using Postimage.

Thanks for doing that Tim.

Ray, after the hassle with Photobucket and earlier an American one that wiped all my pictures in an instant I am very wary of photo hosts.  I am on so few forums now that I don't generally bother if they can't allow immediate uploads from my PC.