That's shitty. Pete was my instructor at racing school. I remember debating Williams v Ferrari(1997) as we did road car laps around Elkhart Lake.

A few years later I ran into him on a race weekend and he gave me a tip about a corner I was struggling with(but wasn't entirely aware I was struggling with it). It was pretty simple but he could immediately tell I didn't 'get' it so expanded his answer and gave me a bit of theory. I really 'hooked up' after that and led my first laps, set the fastest lap of the race, my first podiums, etc, etc.

He was a genuinely gifted coach, a lot of guys just tell you "You need to do X" and move onto the next thing or person. He gave context.

Sad news. I met him a few times when he raced Formula Ford in the UK in the late 70's - early 80's. A really nice guy who never seemed to stop smiling!

I knew Pete was unwell and things had been up and down of late health-wise. Pete drove me around the track at Watkins Glen a number of times -- at speeds I could never even imagine coming close to on my own, much less as a passenger. Pete told that if he killed me, Mike, J.C., and his father, Cameron, would not be happy, so he backed off a little. However, I never blinked because Pete was so good at what he was doing. Plus, there were a few laps around the original course that Pete and Mike, with me along for the ride, that were made with what Mike always termed, "great haste." They were both remarkable in their own ways and both were great to be around. Pete was very modest and always seemed to be so upbeat and positive. As Alan points, he was one of the few people I knew that always seemed to be smiling. Pete's 70th birthday was only two weeks away. That leaves J.C., Rob, and Duke, along with Louise, Marya, and Getchie. As with Brian, my heartfelt condolences to Shelkia and everyone in the Argetsinger family.

"Racing since the early ’70s, with over 200 starts in Formula Ford and Formula Three in Europe. German Rookie of the Year for FF in ’74, British Driver of the Year in ’78, British FF Champion in ’80, and European FF title with Team Royale in 80. Drove Amoco Lola in IMSA Camel GT Series in ’85. Competed in multiple 12- and 24-Hour races including Daytona, Nurburgring, Spa Francorchamps, Sebring and Watkins Glen. Winner, ’98 Petite LeMans GT3 at Road Atlanta, and ’00 GRAND-AM Cup at Watkins Glen. Was head coach or lead instructor for Brands Hatch, BMW, Audi and Skip Barber schools, and private coach to a number of pro drivers for over 20 years, including Damon Hill and Juan Pablo Montoya."

Wonderful memories within the sad times Ray; thanks for sharing. Thanks also to Don, I never got in any really quick laps with Michael around the original Watkins Glen circuit, but I had some door-handle squeezing rides with him in Chicago! What I'd give for another of those. I know the family is appreciative to all for their remembrances and kind thoughts. B²

"We are saddened by the loss of Peter Argetsinger and our condolences are with the entire Argetsinger family. Peter was an important part in carrying on the legacy and tradition that his father Cameron, and family started here in Watkins Glen. He will be remembered for his passion of auto racing and his continued desire to make this community a worldwide staple as an international racing destination."

Friends and past pupils comment on Peter at the rennlist Porsche discussion site:

Very sad news. But to be honest, I think Peter's achievements in racing mean he should deserve his own thread rather than this be in with Michael's. Both were distinctive men in their own right.

The posts above were originally posted in the Michael Argetsinger thread.

Thank you Tim and Richard for the suggestion for Peters own thread.

Sjoukje, that sounds very Dutch, or more correct, Frisian, coing from the county "Friesland" within the Netherlands

She was a Dutch exchange student that Peter met in high school. from what I understand they stayed in touch after she returned home made a couple of visits back and forth and have been married for many years.

When I last spoke to Peter Argetsinger a few months ago, he didn't tell me he was ill. Rather, he told me everything he could about his brother's Elden Mk10B, all the details- so we could get it right in restoring it. I only found out days later that he was sick. Today, I found out he has passed, and he leaves an enormous void.

I only met Peter twice, but he was as kind and full of life as his older brother Michael. As I said, he had a huge part in helping us identify and trace the history of Mike's Elden, as well as sharing his own history with Eldens through the years.

When Michael returned to the US in 1974, Peter went over to Europe (as seen below) and took over the Formula Ford series he had been running, bringing with Miller High Life sponsorship, which he sported on the sides of his Elden Mk10C. Once returning to the states, Pete raced an Elden Mk10A, fully equipped with Falconer fiberglass, before returning to Europe for FF and Formula 3 competition.

The brothers shared driving duties in a few cars, but most notably in the GTP Lights Torlon/Polimotor Lola T616 on June 9, 1985 for the 500km of Mid-Ohio. Although they failed to finish, I recall Mike years later stating how wonderful it was to share such a neat car with his brother in an endurance event.

I had the opportunity to ride in a car with Peter Argetsinger on one lone occasion.

It was the first time I ever met him, yet as opposed to many folks encounters with Peter, we didn't meet at a racetrack. The car we were riding in wasn't even running. Yet, it was a thrill, and something that absolutely captures the man.

It was July 5, 2008. The day previous, my Dad and I, along with the late Loyd Haslee, ventured east to pick up AAR Eagle #8101 out of a damp shed in Connecticut. We then drove north to pick up Fred Egloff's priceless 1937 BMW 328 Roadster in Watkins Glen, New York. The BMW had been on display at the International Motor Racing Research Center in the Glen for a season and needed to be brought back to Fred's place in Chicago. No worries, it was on our way.

Upon arriving in Watkins Glen, we were told the car wasn't at the IMRRC, but instead at the Argetsinger homestead. Peter would be there to meet us.

We rolled up with our 40' gooseneck trailer and Peter walked down the driveway to greet us, the way only an Argetsinger could- warm, gracious, 'tell me about your adventures getting here' etc... I had known this brand of kindness from his brother Michael, but was taken back by Peter’s graciousness. He asked if we wanted sandwiches for lunch, to rest up at their home before we ventured back to Wisconsin…supreme kindness that is not common.

...and then he broke the news. Fred's car was up the hill in the garage, but it would not start. Also, Peter was not too sure about the brakes, but thought we could get it down the hill if we pushed it off in neutral and then used the gears as brakes if need-be. The car was a priceless 1937 BMW 328 racer that was so sought after the Nazi's spent a good deal of time and effort trying to find it during the war. They never did, the then-caretakers hid it under a bunch of wooden deck chairs in the basement of a castle in the Netherlands. A castle the Nazis occupied during the war. Insert Nazi joke here.

So up by the garage Peter got behind the wheel and I gave the BMW a mighty push and quickly jumped in, while Dad and Loyd waited by the trailer with some wooden boards just in case we got into real trouble and had to stop in a hurry.

As we started rolling down the driveway, two things caught my attention. The first was how absolutely stunning the view was from the Argetsinger family homestead. I have witnessed some amazing places in the world, but Watkins Glen, New York is what the earth was intended to look like. Hilly, partly cloudy, and breezy. The kind of breeze the runs like waves through the nearby crops, yet doesn’t affect your hairdo.

The second thing that I noticed was the rather alarming speed we were headed down the driveway. Now don’t quote me on how fast we were actually going, but it felt like 45 mph. Every time Peter hit the brakes, a great squeal would come up from underneath the car, with little-to-no success in slowing the beast, though he seemed supremely in-control.

As the car came down to the road, the speed tapered off and Peter was able to slow the machine by going through the gearbox until we rolled up the ramp of the trailer and into place behind the Eagle. I asked him what he would have done had he not been able to slow the car. He replied with a smile and said if he felt we were in danger, we would have had to jump out. I should have poked at that answer, to see if he meant it, but I never did. Hearing the stories others had with him since makes me think he was joking, and I’m glad for that.

A wonderful story, Jacques, thank you so much for posting it. I appreciate your once again telling us all about the infinite kindness exhibited by the Argetsinger family. They all were and are wonderful human beings. 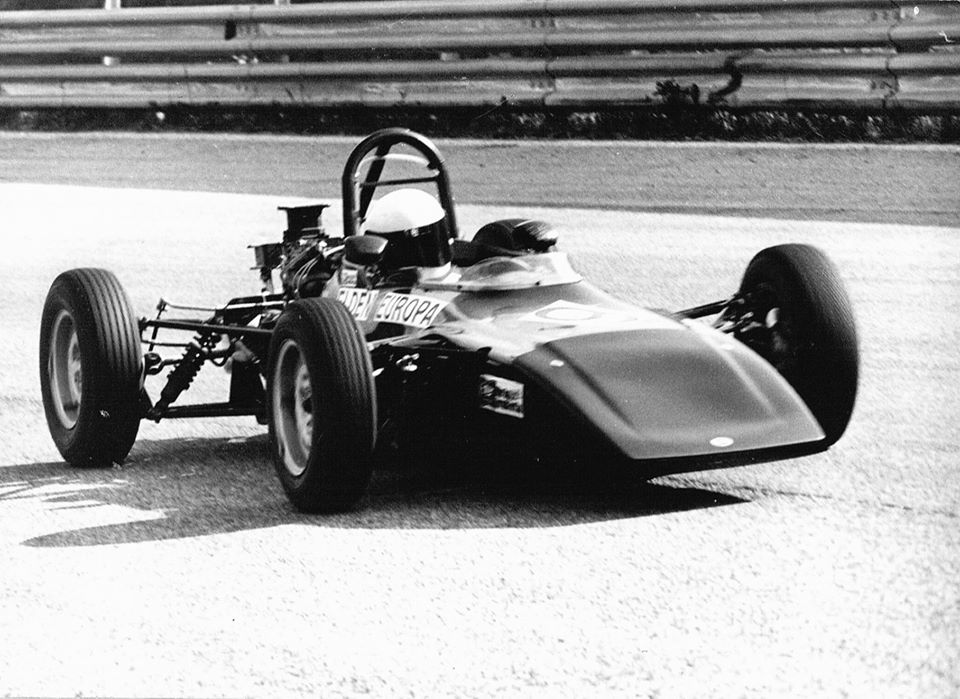 Peter at-speed in 1974 aboard his Elden Mk10C in the Miller High Life Formula Ford Cup.

Peter aboard the Ralt RT3/81-Toyota he used during the 1982 British Formula 3 season with the H.A.R.T. with Pharmacin race team. This photo was also used for the March, 1982 fold-out centerfold of Autosport magazine. 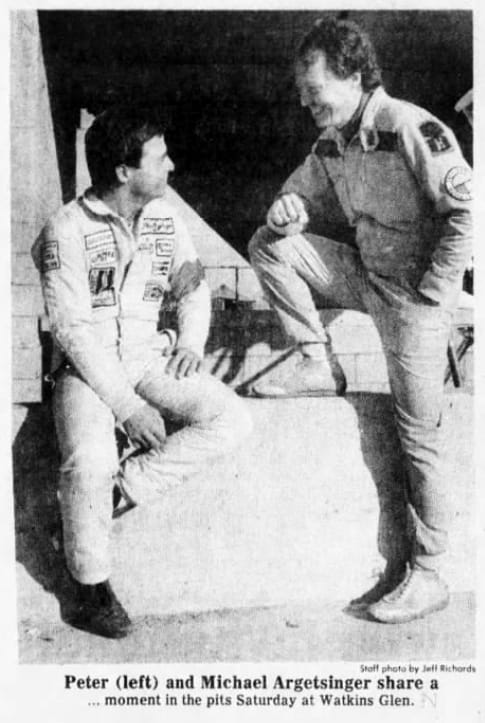 Thanks for the nice photos Jacques.

From the International Motor Racing Research Center in Watkins Glen: