nice pic by a sponsor 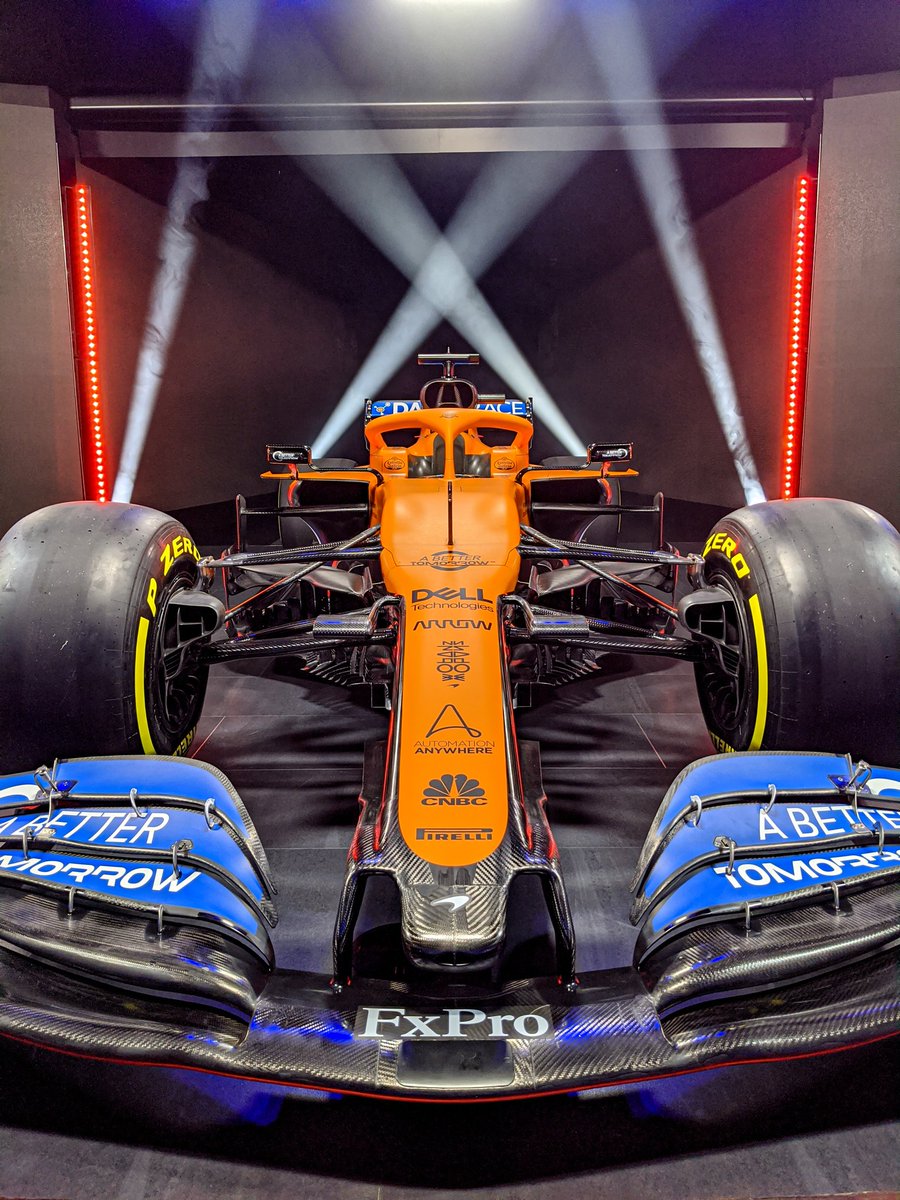 Reasonable expectation is securing 4th place in WCC thoroughly. Last year we were 5th or 6th fastest in some races.This year I hope we will be clear 4th fastest.

The leading edge of the floor is something else, I don't know if anyone else has really gone that extreme there? Past success is no guarantee of future, but I bet Mclaren will cause i  a few more headaches for the big guys this year.


Im staying with the 1968 model for now.
Re: the livery - I like many liked last year’s. But isn’t there a saying along the line that an ugly winning car soon becomes beautiful in the eyes of the beholder? If 35 exceeds our realistic expectations and 34 then we will see it as beautiful. Not yet iconic.

Reasonable expectation is securing 4th place in WCC thoroughly. Last year we were 5th or 6th fastest in some races.This year I hope we will be clear 4th fastest.

That's also my hope, but consistently getting ahead of the RB B-team may prove difficult. Last years RB was pretty handy.

Bardgeboards on the presentation were already slightly different from the studio shots, featuring turning vanes devided in 4 groups, similar to what Ferrari and RedBull did. 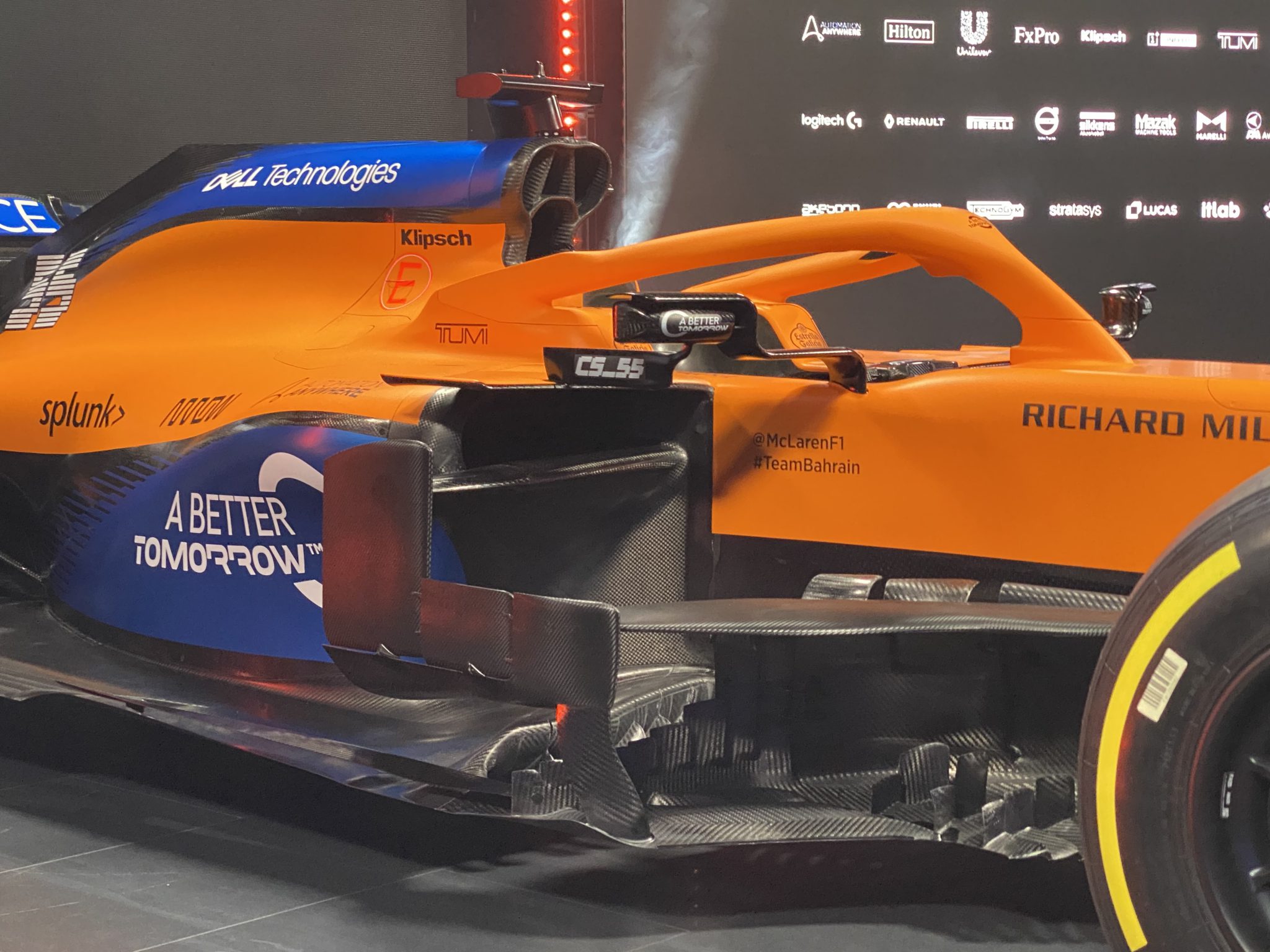 This is the shot I am so happy to see.

I believe that 35 will bring McLaren the 4th,

That's also my hope, but consistently getting ahead of the RB B-team may prove difficult. Last years RB was pretty handy.

STR/AT already seem to have decided 5th place is all they can reasonably expect.  While no-one is mentioning it, I also would imagine that Renault will have moved closer to Ferrari and Mercedes with their PU, and kept Honda behind them - at least for this year.

Boomerang wings look new to me here. What do you think?

At the other end of the scale, we’ve got a new relationship with Unilever, and they won’t be on the car at all, because they’re not looking for brand exposure. They’re actually looking to integrate with us to improve performance – a lot of our partners want to be part of making the car go faster and that’s an amazing story to be able to tell.”

Hello Daniel. Thank you very much for your words. The numbers tell us that much better than the MCL34, so hopeful that it is a good base with which to be able to go on giving enough war. 👍🏼

Yes its updated, better pictures can be found on f1tech

Boomerang wings look new to me here. What do you think?


I haven't seen such a bold claim from him before. Let's hope it translates into the lap time on track.

Who knows, maybe they're developing a combination floor wax and fuel additive.  Sounds like BS to me - probably more like a McLaren wanting as much to put their name on their partner list as Williams charged for a title sponsorship.

I haven't seen such a bold claim from him before. Let's hope it translates into the lap time on track.

I haven't seen such a bold claim from him before. Let's hope it translates into the lap time on track.

btw, when people are making comments like that I'd bet it's based on the targeted Melbourne spec, rather than the launch spec.

Haha, I’ll be hitting the refresh button constantly too!

I assume that testing aero parts are perhaps directly out of 3D printers with no ideal structural strength, so indeed I wait till AUS.

I put my belief on McLaren.


Looks and sounds gorgeous on track!

Looks good! But what about the sponsorship of BAT? Not visible at the car? What happened? Its a filming day. I like the livery better than last years.

Looks good! But what about the sponsorship of BAT? Not visible at the car? What happened? Its a filming day. I like the livery better than last years.

The logos can be added later if needed for whichever territory- some don’t allow these kind of sponsorships.

The logos can be added later if needed for whichever territory- some don’t allow these kind of sponsorships.


You mean a kind or virtual adding via special effects and CGI?

I played it like ten times in a row! 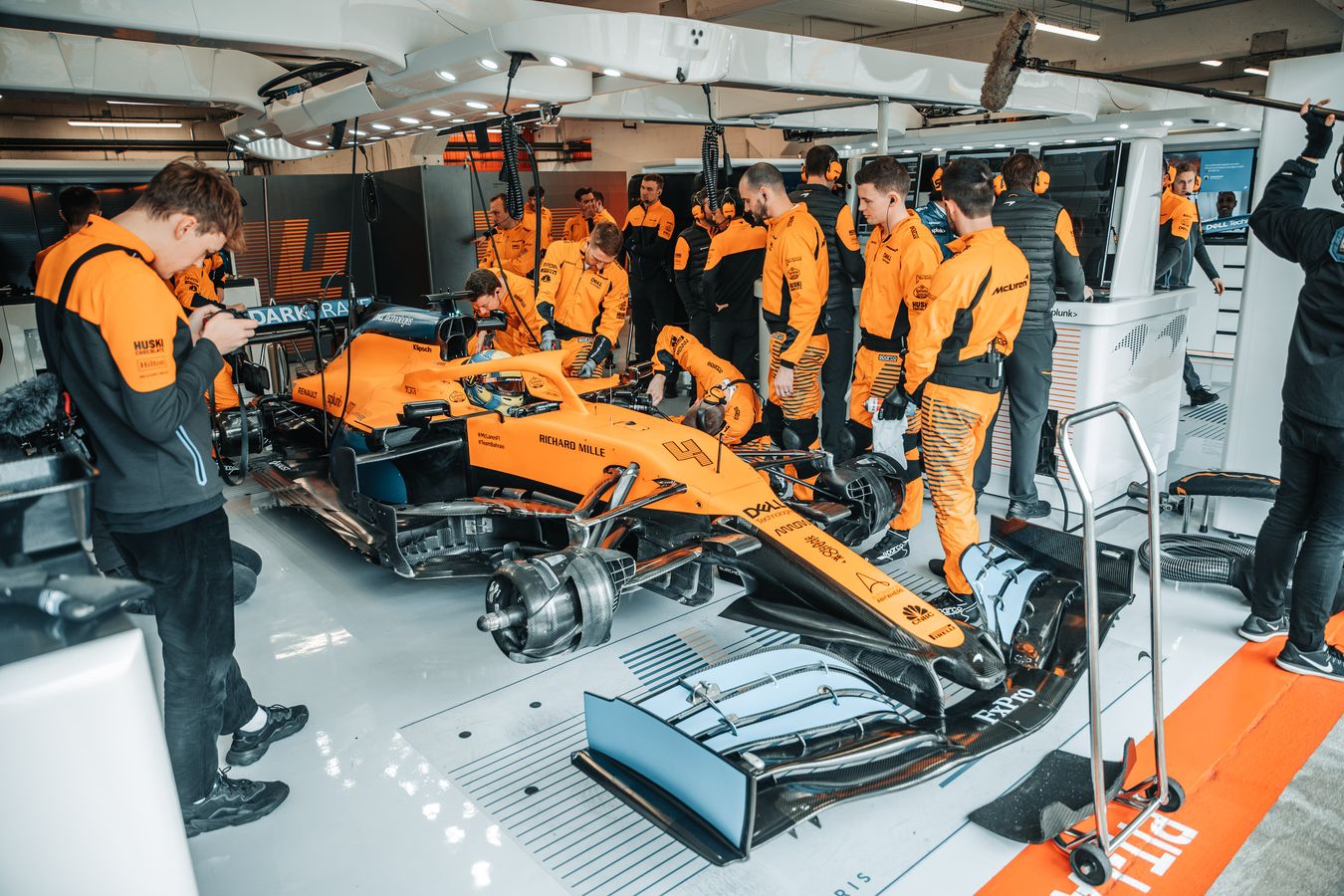 Seen this in F1 technical. Lots of detailed changes.

What happened to the blue color !! Have to say ontrack the matt papaya and that non blue blue look really dope. All the best.

I've got to say I'm very impressed with the side-pod under-cut on the '35'.  Also the side-pod inlets are tiny!: 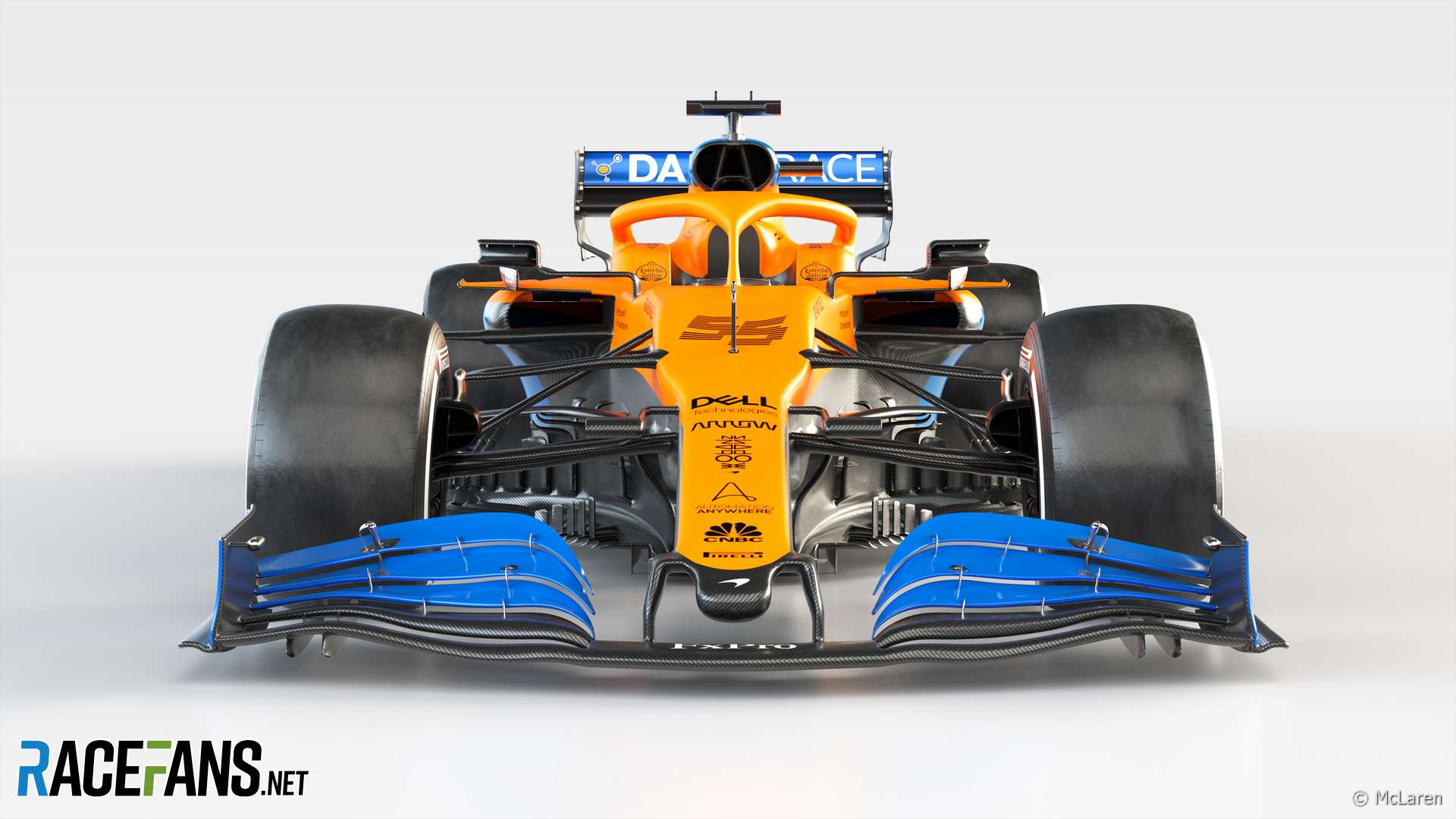 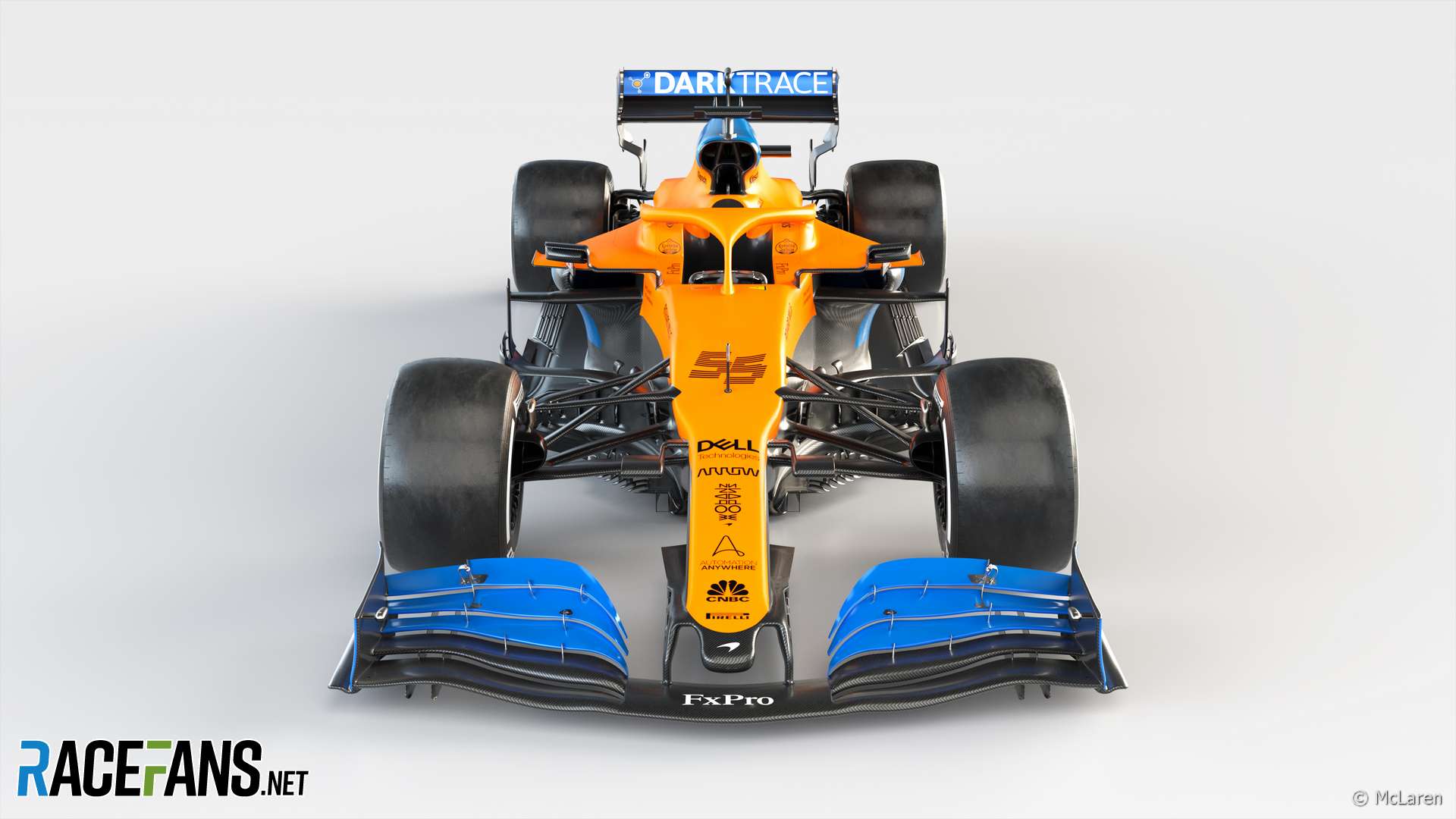 Things which are not to change without crash testing and homologation.

Things which are hard to change through the season and involve big timelines.

Cooling too, though perhaps you included that under "internal packaging".

Things which are modular and bolt on, parts which can be upgraded with relative ease.

Anyway, nice list. I suspect that either come the first race or the Spanish GP, all of these items will look different to end of last year. (Some already do of course) Essentially the changes are coming in waves, with the core changes coming first. It's not the only way to do things but also suggests to me that there's not an awful lot that was wrong with the MCL34 in terms of the parts that can be changed easily.

James key talks about narrow sidepods which they have managed to achieve because of improved packaging, he talks about rear suspension and also certain changes which they could not do with MCL34 because of the geometry. Clearly Mclaren have focused on getting those fundamentals right which cannot be changed or hard to change during a season. In F1 timelines a new batch of upgrades are in parallel design process even as the current designs go in to production. So the some or all  bits i have mentioned in the easily upgradeable category may have a totally different outlook come Melbourne.

It is the fundamentals like weight, packaging [ which has huge aero benefits] and suspension where top teams really hold a big chunk of their advantage and clearly This is what Key refers to when he says as to how Mclaren and their midfield rivals concede ground in similar areas when compared to top teams.

One of the interesting comments Key made is that the team did an analysis on what the other teams have or don't have and that there's something in common of the midfield - they all seem to be missing something that the top 3 have. And so the design team have particularly focused on that missing something, whatever it is. It's probably not something you can really point to in terms of physical features, though there may be various hints if we knew what to look for. In short, there's probably "something" already on the MCL35 (or combination of somethings) that is especially significant, if only we knew what to look for.

Don’t feel too special. They like to spread themselves around, including the Renault thread. Most are escapees from the drinks company team.

Oh, definitely. This happens with every team's fans. And with 'journalists' who write nonsense about the cars based on taking a look at launch cars and photos of them, etc. So, these knobs think they can decipher how well the car is going to perform by just looking at it? These savants should all be F1 aerodynamicists then, I guess,...

Velo branding on the car now after this morning when it was empty...

Ah yeah so they’ve done promo work and swapped sponsors through the day. Love that

The blue looks much nicer in natural light than in studio shots. Well done!

Velo branding on the car now after this morning when it was empty...

Got a good feeling about this year. Just want to see the team cement fourth early on and the switch focus to 2021. Really would be a waste if they miss on a next years big opportunity because they had to keep pushing this year.

it really does look amazing on track, much nicer livery then last year


I can watch this all day long.

The complexity of the front end of the floor in combination with bargeboard, boomerang wing its flaps, under nose turning vane, al those appears to me, be so meticulously coordinated. Hope those will add more performance compared to 34.

Kinda amazing how fragile the both front ends of the floor are. I fear performance losses at the first corner incidents.