"Oddicombe Hill Climb was last run in 2003, when Torbay council deemed the Hill to be no longer privately owned, therefore public highway.

Thus needing an Act of Parliament to lift the 30mph speed limit, a few years earlier we clocked cars at over 75mph."

This event ran for some 50 years then quietly bowed out to the bureaucrats.

(Why not established use?)

Let us record the history here!

Remember popping across to see the Oddicombe hill climb back in the '60's. Oh and Peter Bow was my dentist.

This event ran for some 50 years then quietly bowed out to the bureaucrats.

(Why not established use?)

The law was the law, but now the law is different and there is no reason why Torbay MC can't get a road closure order and run the event again.  There have already been four different closed-road rallies run under the new rules and a rally needs a load more work to organise than just a short hill-climb.

Right here is a question - when was the first event?

Something is telling me that the event was around before 1963 and that 1963 was the first time I went there but I would have been only 14. I may well be wrong. I suppose there may have been more than 2 events a year if 1965 was the tenth running. If you had asked me I would have said it was only once a year.

Regarding re-establishing the event, I seem to recall that it was a very tight little track within very close confines, it may not be considered at all suitable in this day and age. I also suspect that it may be in a poor state of repair now, but I currently have no evidence for that. Strangely enough I was in Torquay only yesterday and thought of visiting Oddicombe but I didn't. I'll have to see if I can get over there again soon.

The second episode of the second series of C4's Great British Car Journeys includes an ascent of Oddicombe, with Peter Davison at the wheel of a Morgan, racing the cliff railway, in which Christopher Timothy is travelling. Go to 34 minutes:

at Oddicombe on Sunday, were

I attended the hillclimb twice, first time in 1999 and again the following year. The track was getting worse due to land slippage and was becoming very bumpy.

A friend of mine competed at Oddicombe in an upgraded Formula Ford ( Royale RP16 from memory ) and mentioned how difficult it was to control the car due to the front wheels pitter-pattering over the bumps due to the roots of the trees which lined the course affecting the road surface. Single seaters were limited to 1600cc.

Coincidentally I bumped into Howard West this morning, he had been MSA Steward in the latter years. He confirmed that the venue was abandoned due to the road surface suffering from the effects of coastal erosion. Also the road at the top, which was a public road, had to act as a sort of upper paddock which was just no longer acceptable.

I had forgotten about the Channel 4 programme. Bit of nostalgia seeing them crossing the River Teign via Shaldon Bridge and driving along the "corniche" type road from Shaldon to Babbacombe. Totally off subject but I recall driving along there once, glancing left and realising I was being overtaken by a Shackleton flying below me!

What does Motorsport Explorer say about Oddicombe?

No problem with quoting from Explorer MCS.

The first note I have on Oddicombe is from Autosport in 1963. It is, of course quite possible that an earlier event took place which was reported in the local press. We have to bear in mind that club events were reported by local enthusiasts, and sometimes they didn't think to include national magazines, or they felt too diffident.

One of my old friends used to phone reports from Shelsley Walsh to the Birmingham Mail to catch their Saturday edition. Getting the report across to a bored and uninterested Sub-editor was quite often frustrating and sometimes hilarious.

For what is is worth the entry from Explorer reads:

Directions: Held in a council owned park by the sea. Adjacent to B3199 (Babbacombe Road) in northwest Torbay. SX9265

Description: Initially 650 yards (594m) later increased to 849 yards (777m) rising steeply through wooded slopes from the paddock on the seafront. The track was narrow and bumpy, but the good surface offered reasonable grip allowing the use of slick tyres in almost all weathers. The hill was one of the steepest available and was very demanding with 4 tight hairpin turns, the outer edges of the road were lined with low stonewalls, which were in turn protected by straw bales.  Oddicombe also offered spectators the facility of a cliff railway as an alternative way of reaching the top of the hill.

History: The first meeting seems to have taken place on a sunny Sunday 20 October 1963. 53 entries ran and John Grafton’s Lotus Seven-Ford set btd with 37.55secs. The hill record was broken twice on 12 October 1967 when Grafton driving his powerful Cooper-Monaco with a V-8 Buick engine set btd with 36.72secs ahead of Gerry Smerdon in his 1293cc Mini-Cooper S with 37.6secs. After these early runs the Torbay MC settled into running events twice a year, normally in March and October up to 2004 (and beyond?) Racing cars were limited to 1600cc. Entries included classes for motorcycles and three wheelers. Kevitt Payne’s Ensign was perennially successful at this hill along with most west-country climbs in the 1980s.  Hillclimbing is exciting for competitors and while all motor sports are dangerous, fortunately serious accidents are few. It is therefore sad to report that John Morgan of Babbacombe was killed on the hill in 1979

Now the entry was less than the manuscript notes I took as I was trying to keep the book within reasonable limits. I was originally contracted for 200,000 words, the final version was cut down to 400,000.

I think we can be fairly certain that the first event was in March 1961 (followed by Oct 1961) - what we need is the evidence.

I submitted reports to "copy-takers" over the phone to the Daily Telegraph from Fuji, Japan. My lady was highly skilled and did an incredible job - I had to hang around at the races and wait for the desk to open in London - usually last man out. 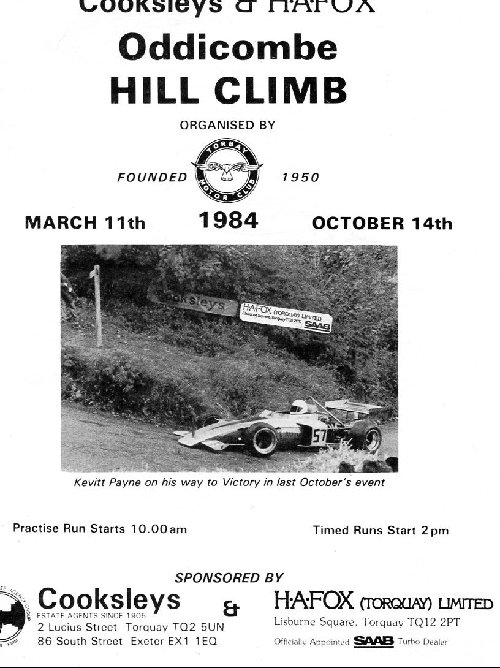 Julian might have tried this already, but the Torquay Herald Express - available on microfilm in Torquay Central Library - would no doubt have covered some or all of the earlier events. Of course that's not a task for the faint-hearted ...

Julian might have tried this already, but the Torquay Herald Express - available on microfilm in Torquay Central Library - would no doubt have covered some or all of the earlier events. Of course that's not a task for the faint-hearted ...

When you have a fairly clear idea when the events took place not too hard either - I could dream about visiting Torquay Central Library, stopping at Fawlty Towers - but it is a long way from Vancouver Island!

(I do have a trip to Gaydon to look at Autocar and The Motor in prospect.)

I have a copy of the entry list for Oddicombe 29 October 1961 which was reported in Motoring News but not Autosport.

I don't have the complete programme so I do not know if it gives any indication as to it being the first event.

There was no class for racing cars

Many thanks to RAP. So now we need the Last Date (no connection to Floyd Cramer) which has to be in March 1961? 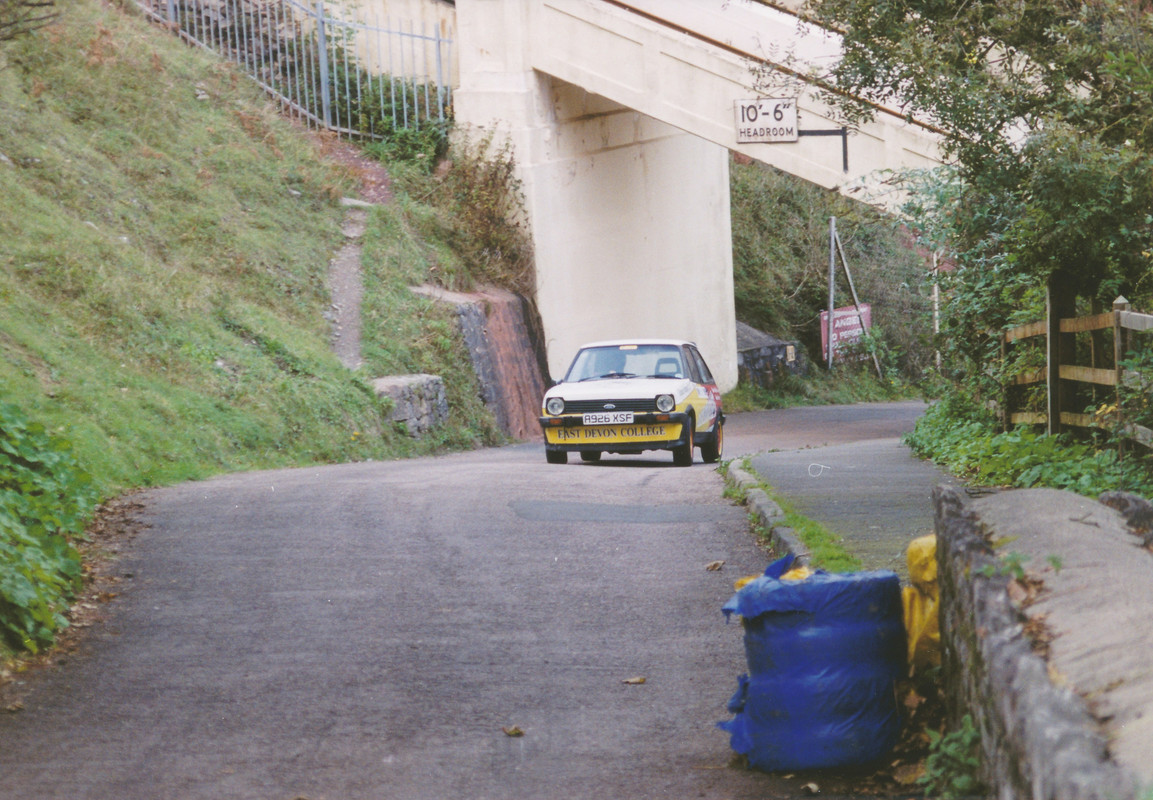 1999 and a Ford Fiesta passes under the funicular railway

The only other reference I can find to B. Whitmarsh and his Lister Jaguar is an entry at Goodwood:

Does anybody know any more?

The car that sticks in my mind was a pretty little Cooper Manx, vague recollection of that Cooper Monaco-Buick.

"This year the hill's length has been extended by about 100 yards by having the start on the promenade."

"The season was now practically over

but not before the Torbay M.C. had 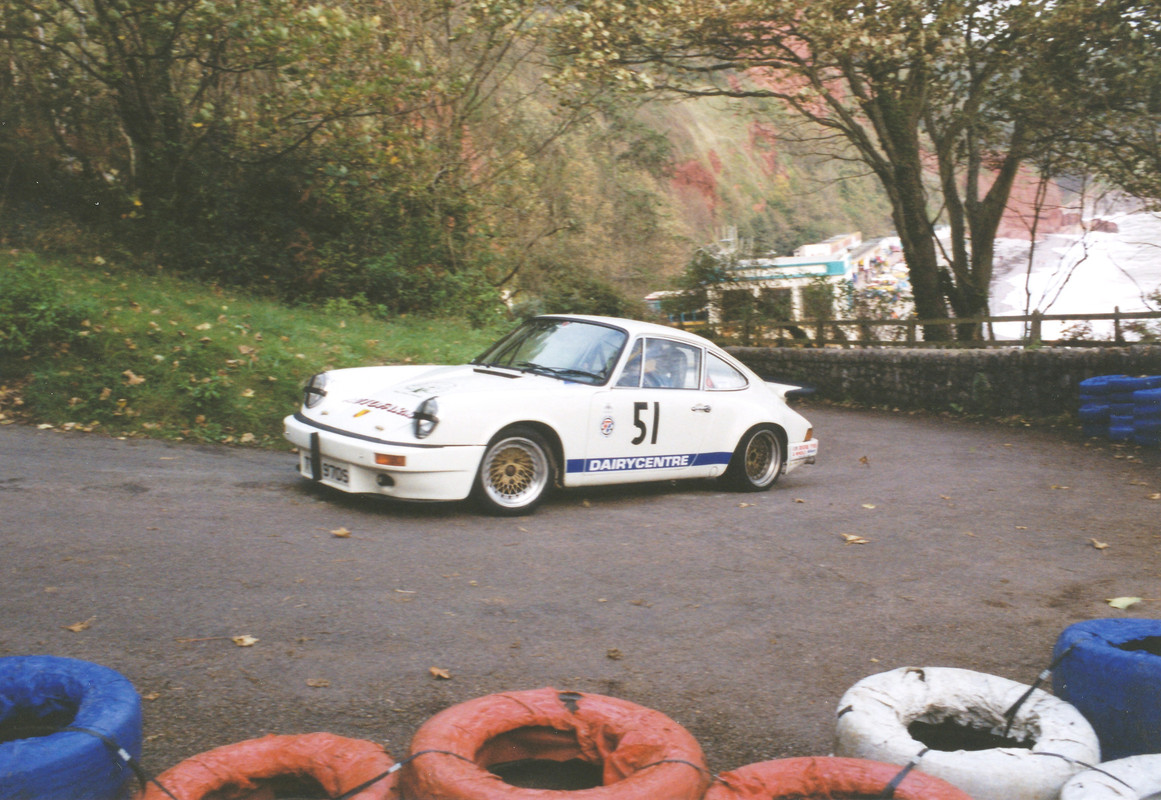 Jonathan Williamson rounding the first hairpin in his 911 - you can just see the sea in the background.

Would the R.A.C. Blue Book, sometimes mentioned on here, assist us with Oddicombe 1961?

Would the R.A.C. Blue Book, sometimes mentioned on here, assist us with Oddicombe 1961?

For what it is worth it is listed in the 1962 RAC Motor Sport Year Book & Fixture List:

ODDICOMBE (Devonshire) Adjacent to B3199 (Babbacombe Road) in N.W. Torquay

A round of the Shell Oils A.S.W.M.C. Hillclimb Championship.

"A true clubman on a club hill, Richard Mullis at Oddicombe." #36 Mini on cover.

"Always one for the unusual Colin Amos contested Oddicombe in a Honda Acty Pick-up." #2.

The car that sticks in my mind was a pretty little Cooper Manx, vague recollection of that Cooper Monaco-Buick.

Here is talk of a Cooper Manx, and what about the Lola Special?

"With the demise of John Pugs-

ley's rapid DRW in practice the

specials and clubman's class was

a Lotus benefit with the Super

7 of Norman Trotter leading all

the way with a first run time of

42.79s which he further reduced

Ken White, having sold the in-

Steer, appeared in his front-

engined Lola Special, but did not

appear too happy with the hand-

ling, and did not appear in the

My time at Oddicombe would have been mid sixties, all I can really remember is a little Cooper Manx not even who drove it or how it went. Remember Peter Bow there with his Midget, also at Wiscombe. But then he was my dentist and also went to the same school as me although before my time. Also remember that early '70's some Torbay MC rally stalwarts took part, Dennis Marchant and maybe Dave Lowen spring to mind. Both from Torbay.