The JWF Story - Italia and Milano

Bruce Polain has sent me a copy of a new book entitled as above...

After doing an autobiography, Bruce conspired with (or is it convinced?) his old friend Sam Johnson that it was time to detail the exploits of the JWF business and the cars they built. And they have completed this in a relatively short amount of time. 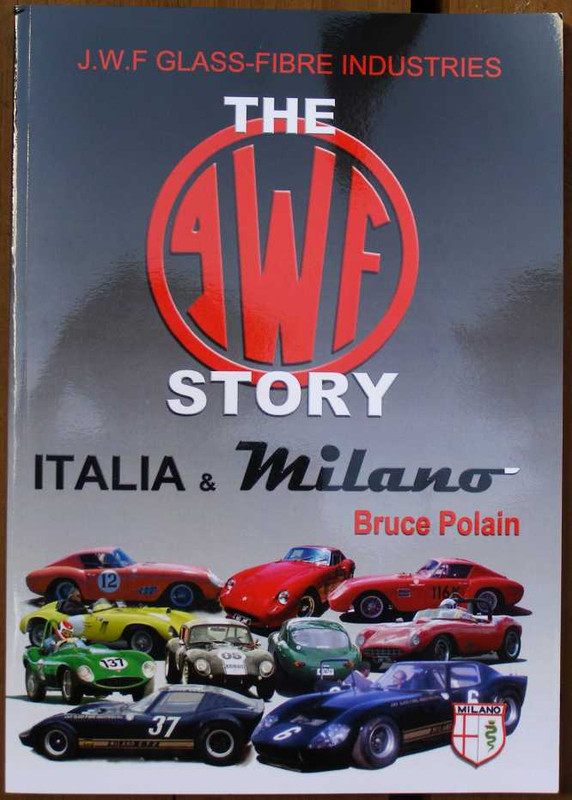 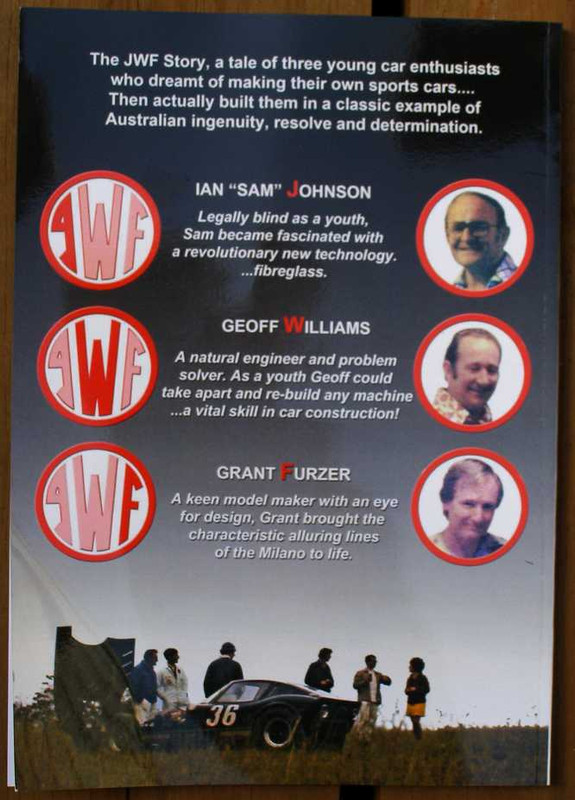 Back Cover. Again from Brian Caldersmith's desk and explaining how the team came together to start the business on a background of what looks like a remote corner of the Oran Park paddock area.

The format of the book is to tell the history of some of the individual cars built. 'Some' because it would be impossible to track down the whole lot of them, over 300 having been built either as bodies or kits, with just a few complete cars. Many of the owners along the way have told their own story, which is interesting too.

Largely it's about the Milanos, the most numerous of the cars. And mostly it's about the Milanos which raced, with a heavy leaning towards the many which raced with Holden engines. But it doesn't begin or end there, as originally many bodies were sold to fit on Austin 7 chassis, extended versions were sold to fit on MG TC chassis and then others had other ideas about how to put them together.

This page, for instance, is all on Milano GTs with 179 Holden engines: 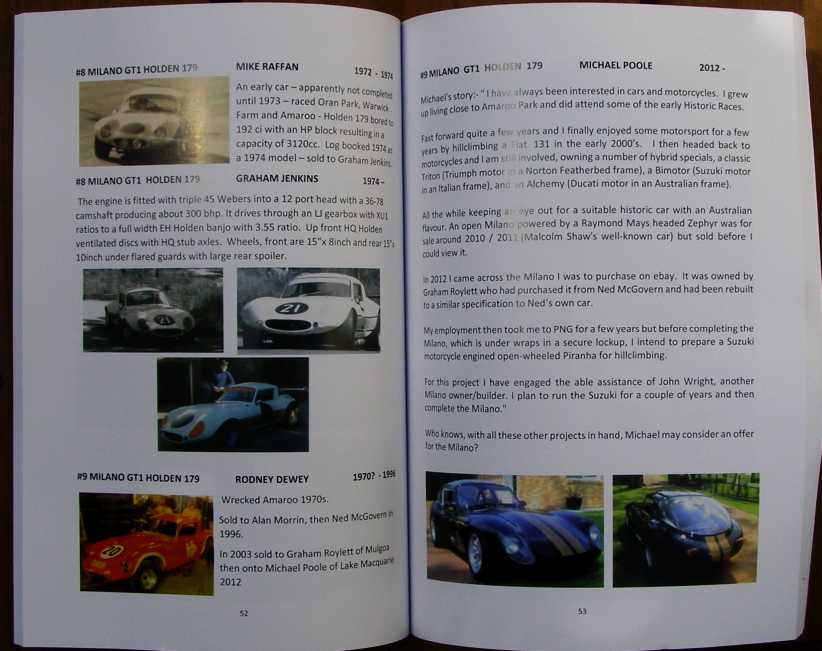 Milano GTs with 179s. Both of the cars on this spread feature engines with better than 250bhp, they'd be exciting to drive on any circuit.

And this one is a bit more eclectic: 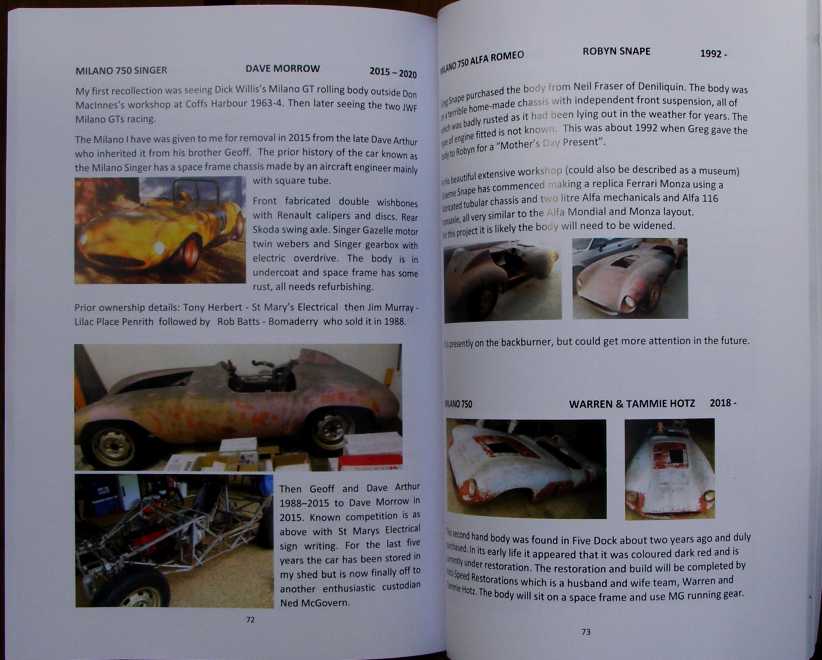 Variety. One car built on a bespoke spaceframe designed by an aircraft engineer with a Singer engine unlikely to produce half of the Holdens' output and driving it through a Skoda swing-axle rear end, another which is a project to get an Alfa 2-litre one day and a third which will see an MG engine installed in its spaceframe chassis.

Once you get past the preponderance of Holden-engined cars there is a fascinating array of individuality, all told with a background of long silent spells when many of the cars were kept in sheds and left incomplete - or awaited restorations. A Jowett Jupiter chassis sits under an Italia coupe body that was made six inches shorter than was needed, this clearly being a mistake made by the original buyer who therefore never finished the car.

Of course, space is devoted to the 'works' cars, the Milano GTs raced by Bruce Leer and Sam Johnson in the mid-sixties. Then to the team of GT2s they raced with such success in the early seventies. These cars left an impact on many a racegoer.

Particular attention is paid to the several cars which have migrated to the UK. Three Milano GTs with 'red' Holden motors, an Itala body on an Austin Healey 100 chassis and an early Milano open body on an MG J2 chassis with a 1500cc XPAG engine.

So the Milanos and Italias found homes for many different specifications of chassis and mechanical components. Some Nota chassis were supplied early on to suit them while the ultimate Milanos, the GT2s, had nice spaceframe chassis with fibreglass inner panels bonded to the tubes which made them very rigid cars. Engines from Austin 7s to supercharged Ford Zephyr - not to mention a couple of V8s - were to be found in addition to the multitude of Holdens.

The book proves that there must still be a lot of Milanos (in particular) lying around in sheds somewhere. Just waiting to have lives like many of those dredged out of such places and finding a place in Bruce's book.

The JWF Story tells of a Special Builders' paradise where the difficult part of building your Special, the body, was taken care of for you. In those much more laid-back days many of these bodies saw service on the road, replacing heavy original steel bodies and giving young owners of old cars a more modern-looking and sporty car with which they could attract young ladies. Not that young ladies didn't own them either, as the book details two such cars daily driven about by young ladies.

And to start the real discussion, I'll add that Dick Willis - who owned and raced one in the mid-sixties - contributed a lot of detail and history to provide a bit of a 'backbone' on which Bruce and Sam could build to make their book more complete. He can tell us a great deal more, I'm sure.

Thanks for the build up Ray, a great story on special building in much simpler times when a home mechanic could build a sporty looking car using a JWF body and easily get it road registered. Consequently many of the 300 or so bodies produced never had a racing history but were used on the road for the pleasure of of their constructor and then eventually, disappeared into oblivion.

I'm in for a copy.  Like I need more books

Your contribution, Dick, must have represented a lot of effort over a long time...

And not knowing the book was going to come from it either. Anyway, while you're here, why not tell us about what it was like to race and hillclimb one 'back in the day'?

Will do Ray, but perhaps we should reacquaint watchers to the Milano GT pages on here which we did several years ago, can you post the link ?

There's an awful lot of photos missing from that thread...

But it is good reading. Possibly the likes of Lynton, Peter, Ken, Rod and so on can repost their photos on this thread and we carry on from there?

The release of the book has brought more cars and pictures out of 'the closet' and Bruce has sent me these: 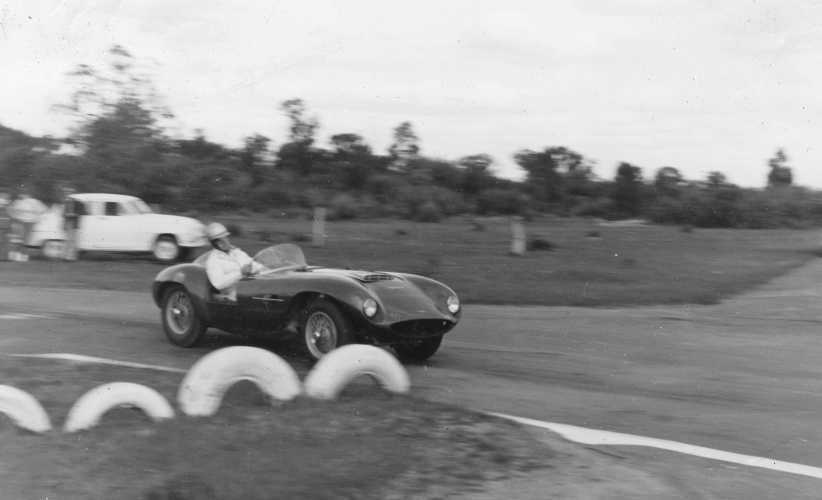 WA Importer. Noel Aldous in the MG-chassised Austin-Healey-powered JWF he built up in 1961. Noel was the WA distributor and five Milano 750 bodies passed through his hands between May, 1960 and November, 1961. This one, however, he crashed. 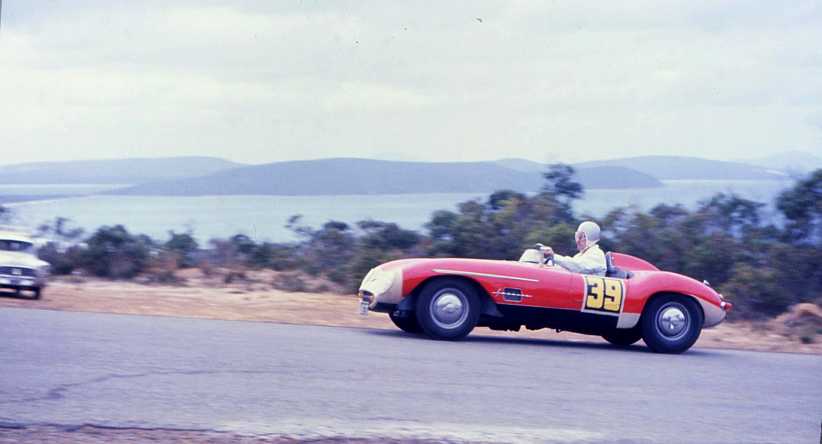 With Holden bits. Fred Coxon became a customer of Noel's and built up this car using Holden power. The 'Special' badge on the side is from an FB or EK front guard, while the background shows the picture is from Albany hillclimb.

Does anyone know if this car has survived? Pics are by Ken Devine, by the way. 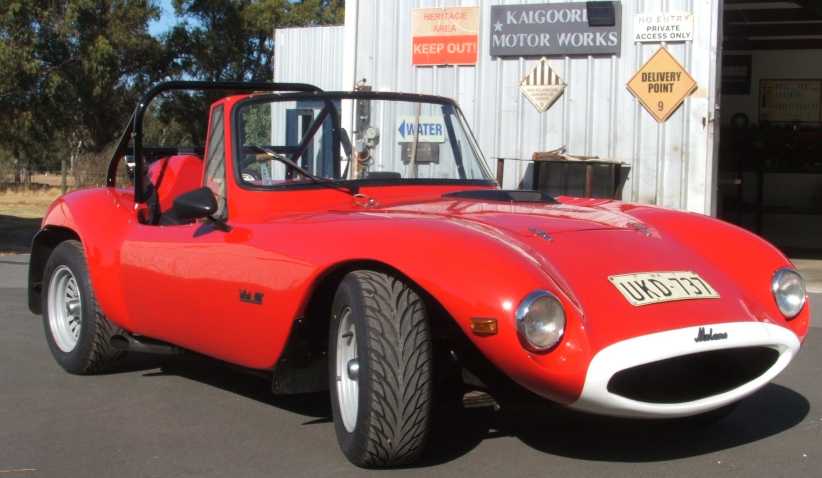 Private import. This car has always, as far as it's known, been a road car. Sold directly to C V Davies of Kalgoorlie in November, 1961, it's now owned by Steve Williams.

JWF records show yet another body went to R Ullrick at Mullewa, about 100kms East of Geraldton. It was a Milano 1000 body but fitted with a Milano GT front and is understood to also have only been a road car.

Here is another "found"

Built in the late 1950’s by a young Gymea enthusiast, John Shaw. His long time buddy, Ray Mitchell helped him along the way and it was finally finished around the end of 1963.

The basis of the car was a 1956 Skoda sedan which had rolled over whilst being delivered to Brisbane on a trailer, this donated the entire running gear, chassis, engine suspension etc. At the time a young company called JWF were producing fibreglass bodies, mainly to fit Austin 7 and MGTC  type running gear. So a body was sourced from JWF and the boys found the chassis was way out of proportion to the body, no problem, they just took 10 inches out of the length of the torque tube connecting the front to the back, they then cut the body into 4 corners, laid it over the chassis / wheels and joined the corners with more fibreglass. Basically that is how the car is now, except as can be seen it has a bonnet bulge.

The bonnet bulge came about in the quest for more power than the 1100cc Skoda engine could give, and a Holden FJ motor, better known as the grey motor, was fitted for a time. All this work was done by John and Ray. John competed in the car from late 63 all the way through till he sold it without motor and gearbox in early 1966. The venues that John raced it at were Warwick Farm, both long and club circuits, Oran Park and Amaroo Park. He also did a lot of Hill-Climbs and the venues were Lithgow, Amaroo, Bathurst, Silverdale and just down the road, Huntley. And finally quite a few standing quarter miles at Castlereagh drag strip.   The car achieved 3rd in class in the 1965 NSW Hill-climb Championship.

As mentioned above John sold the car – to Jeffrey Stone in early 1966 after removing the Holden engine and gearbox but as Jeffrey’s father had a garage specialising in Skoda’s it quickly was restored back to its original specifications and about a year later Jeffrey sold it to his brother, Cecil – it was registered KWF-437 and it carried that registration for the next 53 years till purchased by current owner, Ed Holly who put the car on Club Plates.

The car will now be restored sympathetically, and repainted back to its original maroon colour. The bonnet bulge will probably stay as it is a big part of the car’s history competing for 18 months with that Holden engine.  Incidentally, it consistently ran the quarter in 16.0 seconds and achieved a best of 99mph at the end, not bad for an Aussie Special. Sadly John Shaw passed away in 2008 after competing in other cars including a very quick Jaguar XK140. One story Ray related was when the Holden engine was installed, it was difficult to control the wheelspin, so John filled the spare wheel, carried over the rear axle inside the bodywork with water, and that helped a lot.

Photo courtesy of the Shaw family. 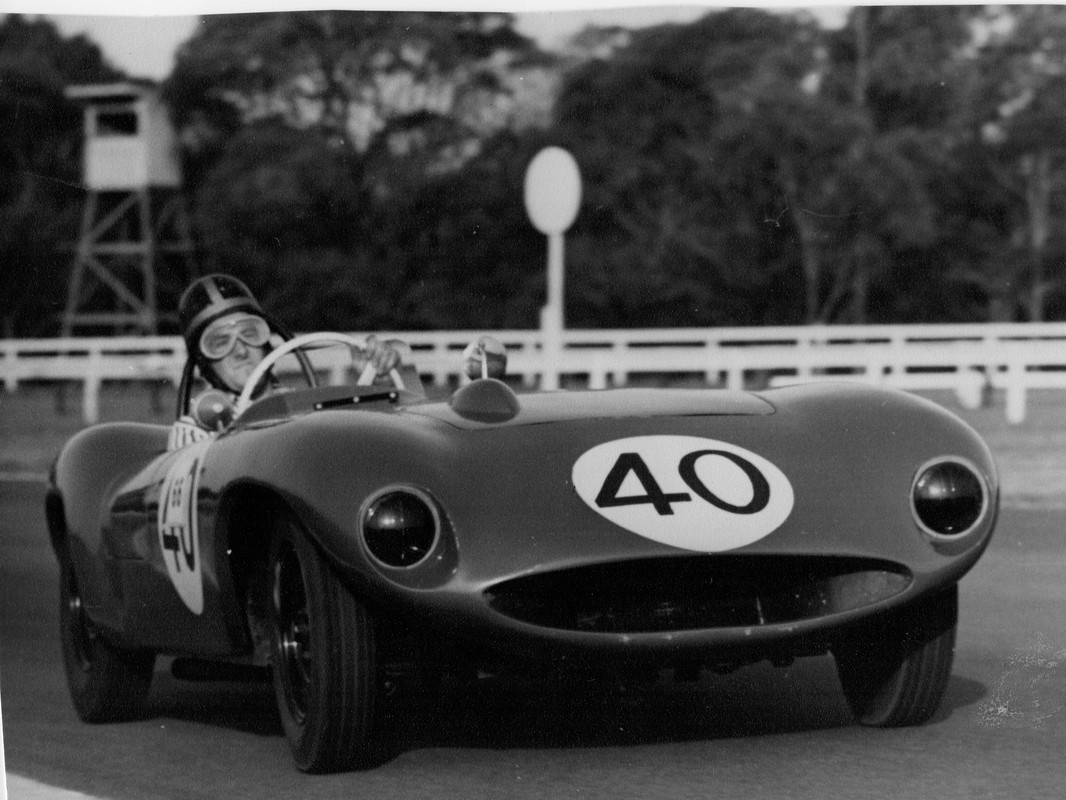 One thing that caught my eye, was it perhaps Geoff Stone who bought the car? Geoff Stone later raced Formula Vees and (I think) FFord.