I am very sad to inform members of the recent death of our friend (and regular contributor to this forum) Paul Collins.

Here is a tribute to Paul that was posted on Facebook today by Barry Wood:

Many from the local road racing community, especially within the Manx Grand Prix, have been saddened in the last day or so to learn of the passing of Paul “Stealth” Collins following a short illness. He was a popular and much respected gentleman in road racing and was responsible for helping many riders over the last 30 or so years.

Paul was originally from Waltham, near Grimsby. He was a very competitive racer in his younger days, mainly at his local Cadwell Park. He was a staunch member of the Grantham Pegasus club and regularly helped out with many other jobs including scrutineering. He always hoped to compete in the Manx but, typically, he spent most of his time helping others to achieve their MGP ambitions instead. Among the bikes he raced were an ex-Tony Head Honda 500 and a few TZ Yamaha’s, one of which was a 374cc for him to compete in the 500cc class.

He first began attending the MGP regularly in the mid 1980’s with fellow Lincolnshire racer Ian Tunstall who competed in the Manx several times. They were based in a garage in the lane behind Marathon Drive, not too far from the MGP paddock. Paul often used to say they were rarely out of the garage, such was the workload keeping the early TZ’s running for two weeks at the Manx. His only “escape” was a walk round to the little shop which he fondly remembered as “Arkwright’s” as that was what it reminded him of. They sold anything and everything! Sadly, the shop disappeared some years ago, but Paul often would pop in there many years later for a chat with the shopkeeper.

He was an absolute master working on racing two-strokes. He told me he learned a lot from being friendly with the RAF lads as they were very meticulous and much of their advice was incorporated into his own preparation. He also was notoriously laid-back and even the biggest blow-ups caused him little worry. Just the sort of person you needed with you when the chips were down and you were struggling to qualify.

Paul loved the MGP more so than any other meeting within road racing. In particular the two- strokes. He loved having a chat with anyone else who was running a TZ or RS and knew many of the riders well, often listening to their tales of woe and suggesting a solution, very often getting his own hands dirty to get someone out in the next practice session. When Ian Tunstall stopped coming to the Manx, Paul spent a few years helping Willaston rider Barry Wood. He provided invaluable assistance to Barry during those years and even helped pinpoint a TZ 250 for Barry to buy near Market Rasen, not far from his home. Then he began

helping out mutual close friend Russell Henley and finally, following a typical “all-nighter” working on Russ’ bike, was first there in the winners enclosure to congratulate Russ on winning the Lightweight race in 1996.

Paul became close friends with Martin Bullock and Alan and Mike Kelly of Mannin Collections. He continued as a key part of their racing teams for several years. He also struck up a great friendship with Laxey rider Nigel Beattie and was a great help in his Mountain course career.

He always said that one day he hoped to be able to live on the Isle of Man where he had spent so many happy years and eventually he was able to realise this personal ambition. He started his own Health and Safety consultancy business and moved into Ashfield Lodge on Glencrutchery Road where he lived for a few years. He loved telling people the story that he lived at more or less the spot where John Hartle’s works MV Agusta burnt out at the TT in 1958.

Lately Paul took great pleasure in assisting all the MGP Newcomers in their Pit Lane briefing, prior to their first race on the Mountain Course.

Paul “Stealth” Collins will be missed by many within the local road racing scene. He was always there in the background, helping out wherever and whenever he was able to. Many MGP riders have much to thank him for.

Paul’s funeral service will take place on Friday 2 October at St. Ninians Church at 11.00 am 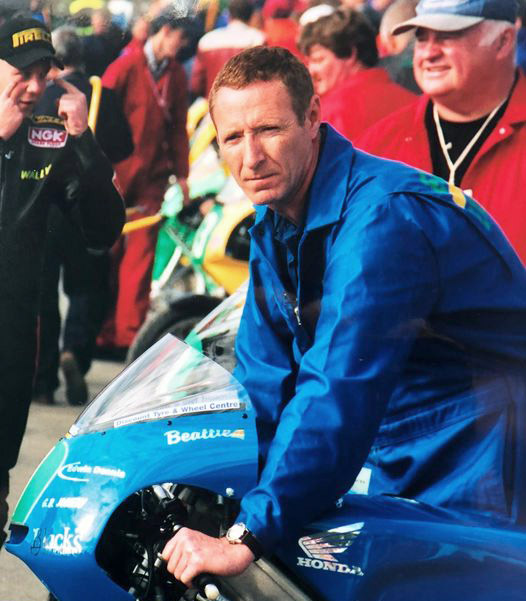 Sad news, it only seemed like a few years ago that Paul said “just spent an enjoyable 20 minutes reading through those results” for Crystal Palace, that was  2015. Have enjoyed reading through Pauls old posts.

Although I only knew Paul via the forum it appears he had good knowledge of motorcycle sport and will be missed by his friends in the sport.

My condolence to his family.

So sorry to be coming back to this site for a catch up and hearing this sad news.

I have only just seen this sad news. RIP Paul.