Who was this British racing driver?

I am reading Left Bank by Agnès Poirier, which is about artistic/intellectual/political/sexual goings-on in the Quartier Latin during and after World War II. My attention was caught by a passage concerning the arrival of the American-Canadian writer Saul Bellow in Paris in 1948. He chose to live with his wife and child on the bourgeois Right Bank (later renting a small apartment for assignations on the Left Bank), in an ornate apartment at 24 rue Marbeuf (8th Arrondissement):

"Saul had brought a new Remington portable typewriter in his luggage, but the French landlady (married to a British car racer) demanded it as a gift."

Who was the driver?

The book is rather good, mostly, in my opinion. I have not quite finished it yet but so far there is no mention of another motor racing connection: there are many references to Juliette Gréco, who fell off the perch recently, but none so far to one of her lovers, Jean-Pierre Wimille. It was by no means an exclusive club, but he was undoubtedly among the most important to her. She was pregnant with his child when he was killed, but miscarried. I shall return and do a Mea culpa if Wimille appears in the pages I have not yet read.

I'd have thought Taso Mathieson and Pat Garland would be the most obvious 'suspects'.

Taso married Mila Parély in 1947. The only marriage record I can trace for Garland is from 1953 in London, but that's not to say he hadn't been married before, of course.

Agree with Richard: Mila Parély (nee Olga Colette Peszynski) and Taso Mathieson as her husband and a British racing driver is the most obvious answer. And by the way tomorrow is Mila's 103rd would-be-birthday.

In the last photo Mila is pictured with Taso Mathieson and their pet dog at Victoria Station in London on the 25th January 1948.

Referenced in "The Life of Saul Bellow: To Fame and Fortune, 1915-1964, Volume 1". The "British car racer" was named Pope, who "had broken all racing car records between Nice and the English Channel". H.R.Pope, who drove Itala cars, I would guess.

This Motor Sport article about Itala confirms that H R (Henry Richard) Pope, who sold Itala cars in the UK although resident in the South of France, was well-known for his record-breaking runs in Italas. 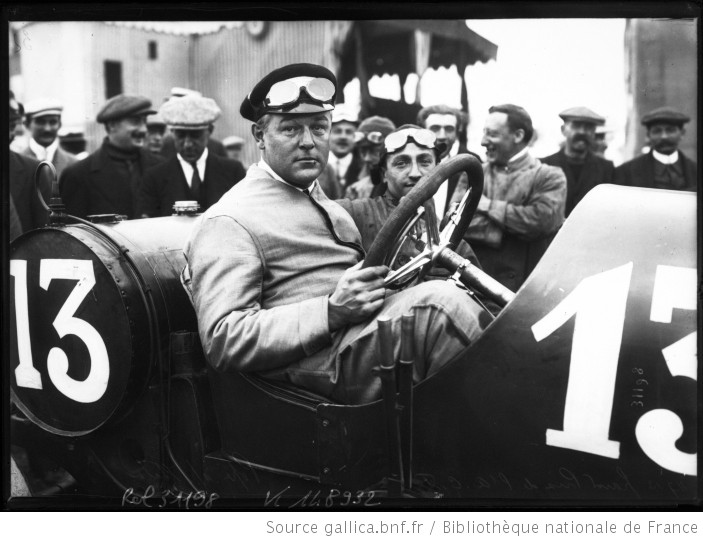 So it appears to be H.R.Pope, a driver from pre-WWI era. Here comes the proof directly from the above mentioned book: