This one has me stumped does anyone know what it is? 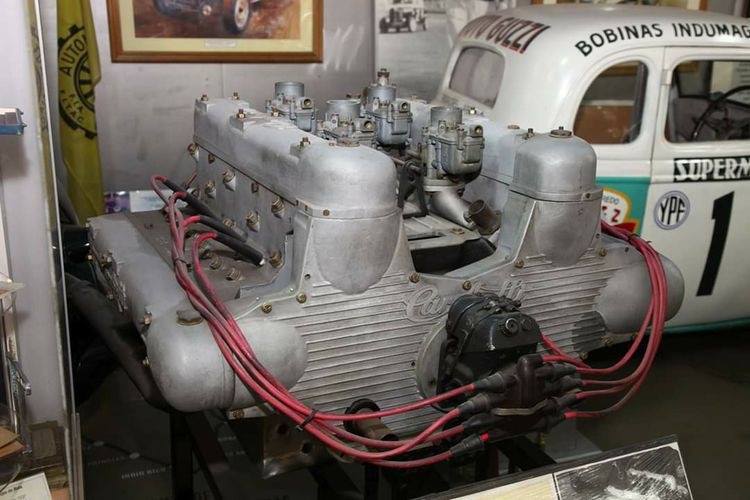 It would be helpful for research to know where the photo was taken.

It would be helpful for research to know where the photo was taken.

Yes it would be very helpful.

A  couple of observations , the distributor is in the same position as a Ford side valve V8 and looking between the cylinder heads the block appears to higher than the heads , so my guess is ford SideValve V8 based, or maybe Ford "Y" block , that has a similar detail to the top of the block, the car in the back round has a YPF logo on it so maybe look at Argentina, trying to decipher the logo cast in the front

Strange thing. The YPF sticker suggests Argentina, the flag at the back doesn't contradict that (but it is not clear)

The paintwork on the car behind (better than new) suggests a sort of museum setting.

It is obviously a 90 degree V- engine, quite probably a V-8. However if you follow the center lines of where the pistons should be, they cross very low in the block, maybe even below, which leaves me with the question where the crankshaft would be.

Finally there is a name on the engine, Car....tti (partially hidden). Maybe someone remembers the missing characters.

The Bobinas Indumag signage suggests Argentina too. No cooling fins which you might expect for a stationary or aero engine. A marine engine?

The flag looks to be the logo of the Automovil Club Argentino. You can find another version of it here, although note that the picture below is slightly different, in that it includes the intials of the AIT (Alliance Internationale de Tourisme), which don't seem to be on the flag.

Here's a car badge without AIT on it: https://www.catawiki...-good-condition

However, it appears the ACA didn't actually join the AIT until 1999, so the flag isn't going to be much use for dating!

A shame there's only one photo.

Using a bit of lateral thinking I've found the car - or at least a model of it! It's a 1961 TC Ford, used by Oscar Galvez.

I'd been thinking along the same lines as Charlieman about marine engines. When wheeled motor sport finally ended in Argentina in mid-1942 several of the established stars took to racing on water instead. Fuel shortages weren't quite as much of a problem in Argentina as in the rest of the world - what they didn't have in quantity was tyres.

It's a shame the bottom of the scene is missing as it appears there is an explanation of what the exhibit is. Unless the photo has been cropped by Catalina Park to test TNFers!  I regret that I have no idea what the engine is. But I am confident that someone on here will tell us.

It's a shame the bottom of the scene is missing as it appears there is an explanation of what the exhibit is. Unless the photo has been cropped by Catalina Park to test TNFers!  I regret that I have no idea what the engine is. But I am confident that someone on here will tell us.

I think it's now just a question of working out which Argentinian museum that Ford lives in. Doesn't seem to be in either the national one in Buenos Aires or the Fangio in Balcarce - both of them have sections dedicated to Galvez, but that car doesn't appear to be in either collection.

The name Spadafora rang a bell as associated with racing car restoration, but I wonder if that museum still exists? This recounts a visit in 2010 ...

Luis Spadafora is one of the presenters of this video, which shows us round the national museum in BA:

The museum is or was about 30 blocks from my house. I promise I will go and see if it still exists and if it does, the pandemic has not closed it to the public.
Stay tuned.

Translating the reference to the engine makes it plain enough that it's on a side-valve Ford V8 block:


Regarding the Emiliozzi, I base myself on photos from Mrs. Irma Emiliozzi's book, and on information that the Hermanos Emiliozzi Municipal Museum kindly provides me. In addition to overhead valves, which is what is always cited, that engine had overhead camshaft, like those of Pián and Carabelli, (more or less contemporary), only those of the latter had two per bench [bank], the of the Emiliozzi only one per bench.

Carlos Carabelli on a Ford V8 block, in Buenos Aires, in the 1950s, developed double tree tops at the head, for Mecánica Nacional, the engine is in the Museum of the friend Spadafora.

Many designers, planners or preparers for years before had chosen this system for their realizations, which obviously gave and gives very good results.

Delage, Alfa Romeo, Maserati, Bugatti, among other high-performance engine builders had adopted leading tree or trees for thirty years, in both inline and “V” engines.

The valve angle is incredibly wide, possibly looking for some valve size on the heavily undersquare engine, the shape of the chambers would be of interest.

I was looking through the collection of "Velocidad" magazines from the 1950s that my late father gave me many years ago. As I have read them several times, I remembered a note about a "Fuerza Libre" with a 4 overhead camshaft engine. Here is the newspaper report and the cover of the magazine that contains it.
I promise you a translation in a few days.

Here is a rough translation, I hope it is useful.

As our readers will recall, we have on several occasions

Carabelli's Formula Libre, in an article

In an article that appeared in this magazine in issue 22 we had the opportunity to describe, albeit briefly, the characteristics of the

of the four cylinder covers of the Ford engine that equips this machine.

There were many rumours and opinions about this

opinions have been voiced about this “Fórmula Libre” car,

which we prefer to call Formula

Free, as well as preferring to call it Formula

National Mechanics", to replace it with the simpler

We have already stated the reason for this preference between the two names, and we are sure that it will not be long before this theory will be universally adopted.

The Carabelli car is undoubtedly the product of an intelligent

product of an intelligent effort, and we believe

that this effort will reap its rewards in due course.

Some say that its chassis is.

Maserati. In a certain sense this is true. At

In fact, the chassis of the machine we are going to

described here is the result of a project by Mr. Rugge ri,  a Scuderia Milano technician, and on the basis of the

and the structure was built on the basis of his plans.

The suspensions were already built and applied to the chassis according to the drawing.

As for the engine, it is a simple Ford engine, but the most important part of the

except for the crankshaft, which will be replaced shortly.

will be replaced shortly, has been built in the Carabelli industrial

dustrial workshops. We are referring to the cylinder

head, the timing system, the fuel system and the carburation.

which were originally 4 and are now 2, are normal Ford carburettors.

Although there are lazy people among our special car makers who aspire to follow the European school, trying to approach, among other things, the international

international formulae, it must be said that Carabelli has resolutely embarked on this path

With the realisation of its Grand Prix

which is, by the way, very modest in

The necessary experience of years of testing in this field is still lacking.

the necessary experience of years of trials in the field, from a practical, rather than a

from a practical rather than a theoretical point of view, Carabelli's

Carabelli wanted to begin its journey in the field of

Of course, this is a figure based on theory, as it has not been possible to check it.

on the test bench.

This is the engine( made by Mentasti, an ingenious

and capable technician, who may be able

to tune it further and achieve a higher number of revs and more HP.

As for the chassis, we have already told you where it came from

its origin, and - we can only applaud

Carabelli's initiative in this respect, for the reasons explained above.

It is a two-sided tube beam of about 10 cm in length.

5 cm minimum diameter, according to the perpendicular and horizontal cross-section

The front suspension is by parallel longitudinal torsion bars, one on each side, and

It is therefore independent. The rear suspension

The rear suspension is quite interesting.

sant. It is independent, the differential being fixed to the chassis

The rear suspension is independent, with the differential being fixed to the chassis and the two axle shafts being telescopic.

The wheels are hinged to two air arms, but are telescopic.

Porsche system, but without a transverse torsion bar).

torsion bar). The suspension itself is provided by a transverse

The suspension itself is achieved by means of a transverse elastic lower link, which is attached to the chassis at the

The suspension itself is provided by a lower transverse spring, which is attached to the chassis at the centre of the chassis

and to the wheels by means of two very strong twins. long. The cushioning is provided by shock absorbers.

The damping is by arm dampers.

and the front and rear wheelbases measure 1350 mm.

mm, while the ground clearance is 11 mm.

which is very little indeed. The normal demultiplication

(reduction of the number of turns on the axle shafts) is

at the rear. According to these data, and if the engine

the engine speed of 5500 rpm. in direct running, the

in direct gear, the maximum speed of the co

che would be 238.700 kms/h., considering the percentage of centrifugal

the centrifugal increase of the wheel diameters and the counter

Overall, it is, as can be seen, an interesting and innovative machine, although it is still at an experimental stage,

although it is still at an experimental stage. No

the characteristics of the engine are improved and its

and its resistance is increased, while improving the bodywork line.

the body line, which plays an important role at high speeds.

Perhaps other machines can be developed from this machine,

adjusted to a different formula. We hope so and

and we recommend it. The rest will be determined by the possibilities of the Carabelli

Carabelli, which is a small, but well-run and well

The Ruggeri mentioned is presumably Arialdo of that ilk, who - as mentioned in this Bonhams description of the unfinished Milano-Speluzzi, which was sold at Goodwood in 2014 - found himself in the position that his 'financial problems had finally overwhelmed his resources, and reputedly he resolved them by emigrating to Argentina.'

Thanks for the research. I suppose it must be some sort of pent roof , hence the whacky rocker cover alignment.

The engine looks huge, the car next to it looks small. Camera angle I guess.

But all of that on a side valve Ford.

This pic should join the others on the thread for modified SV Fords.

Which came from the Speedway Motors site