One Driver, One Race Competition 2021


70 replies to this topic

For every race, each member will pick one driver and the same driver may not be picked twice before all drivers have been used. The member will get points according to the finishing position of the driver, so win is worth of one point, 2nd place worth of two points etc. After all classified drivers, the list is followed by retired drivers followed by disqualified drivers followed by non-starting drivers.
The initial prediction has to be made before FP1 starts at Bahrain. These shall not be altered unless new driver is entered for any race, that driver can be entered for any event, with original prediction moved to the next race where there is no driver named.
As there are more than 20 races in the schedule, the original predictions include only first 20 races.
After all the drivers have been used, drivers may be used for the second time. However, only one result per driver can be counted for overall standings.
The number of races counted to the overall standings is at least 20, but it may be greater depending of overall amount of drivers competing during the season.
If any race is cancelled, the driver originally selected for the event may be used later.
Additionally, each member predicts how many points Fernando Alonso will score during the season. This will act as a tie-breaker. If no prediction is made for this part, it will count as zero points.

The initial prediction to be filled:

alekracing had no Norris and driver missing from Singapore, so I placed Norris for Singapore
Marklar had Norris twice and no Vettel. By a draw, Norris was put in Belgium and Vettel in Portugal
Grayson had Latifi twice and no Ricciardo. By a draw, Latifi was put in Singapore and Ricciardo in São Paulo.
Here are the predictions listed, please check everything is ok for you. 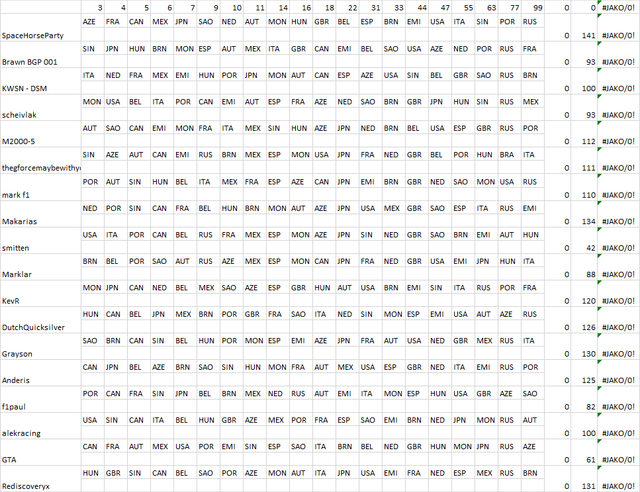 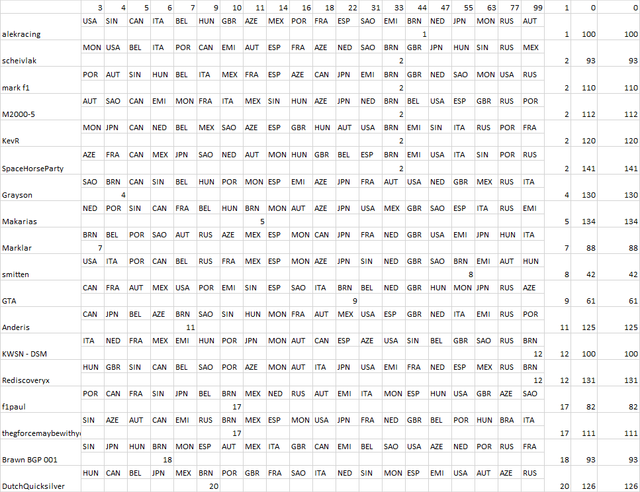 Verstappen was the most popular choice and he took 2nd place. alekracing was the only one to pick the winner here. I assume big disappointments for f1paul and thegforcemaybewithyou for Gasly. Everyone else much closer to the positions where they were expected to be.

Ouch, decided to pick Mazepin for race one, to get that out of the way. Bad choice

Emilia-Romagna: alekracing predicted the winner for the second time. Predictions very much divided. Couple of pick for Williams drivers in the race which was the worst possible for them.
Portugal: No one predicted winner, the best result was Bottas's third place. Gasly was the most popular pick and it awarded tenth place. Bad result for scheivlak with Räikkönen. KevR and SpaceHorseParty were joint leaders at this point.
Spain: F1paul and DutchQuickSilver had Hamilton for this race and it was a victory. Home race hero Alonso was the most popular pick but it backfired with tyre troubles putting Fernando down to 17th.
Standings: 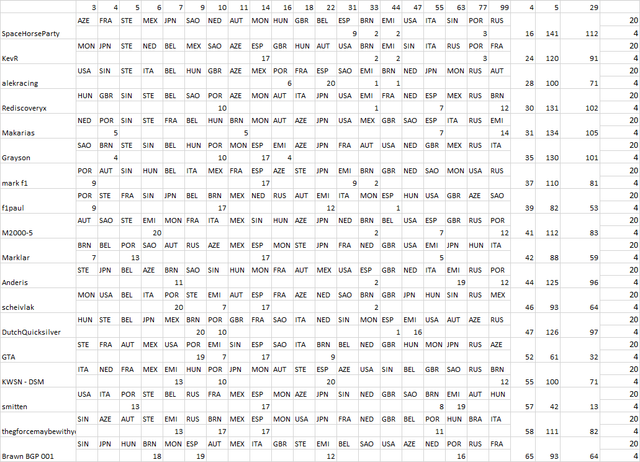 Calendar changes: Original Canadian GP predictions now apply to Styrian GP. However, I allow each one to swap that prediction for another unused driver until the beginning of Monaco Grand Prix first free practice. 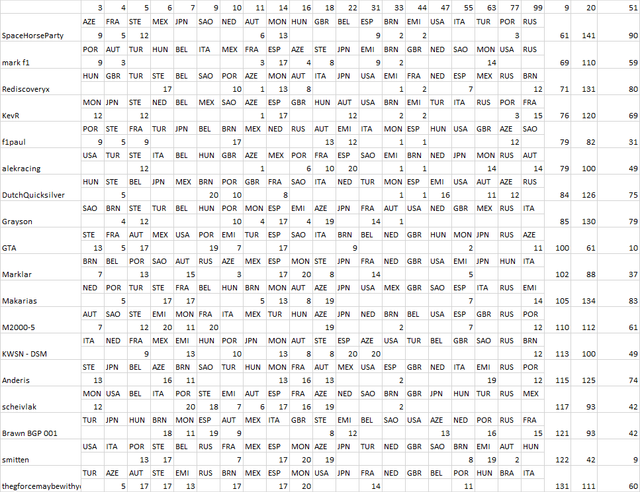 Original Singapore GP predictions applied to Turkish GP. However, I allow each one to swap that prediction for another unused driver until the Sunday/Monday midnight CEST after British GP.

Original Singapore GP predictions applied to Turkish GP. However, I allow each one to swap that prediction for another unused driver until the Sunday/Monday midnight CEST after British GP.

I have a hard time figuring out how to read that image, other than I appear towards the bottom.

I have a hard time figuring out how to read that image, other than I appear towards the bottom.

Numbers on the upper row 3 to 99 refers to drivers.

Por 3 under 77 means that Bottas was selected for Portuguese GP and he finished 3rd.

On the top right 9/20/51 refer to Alonso. He has 20 points after 9 races which on average would mean him scoring 51 points over the season.

Numbers from 61 to 131 refer to overall points so far. Next to it is point prediction for Alonso and next to it difference between that prediction and aforementioned 51.

Man my Leclerc guess was inspired.

Man, it was so close to my Hamilton guess backfiring horribly. But it didn't. I'll have my Hamilton-Verstappen average at 1.5. so at least I've avoided the biggest possible disaster.

If it is any consollation, I think more than half the participants scored badly this round.

If it is any consollation, I think more than half the participants scored badly this round.

But quite a few picked drivers who got their best results of the season. For example markf1 gained big with Latifi.

It's races like this that decide overall standings for this game. And today I was on the wrong end of the swing of luck. Probably not going to recover considering I wasn't going great up to this point in the first place. 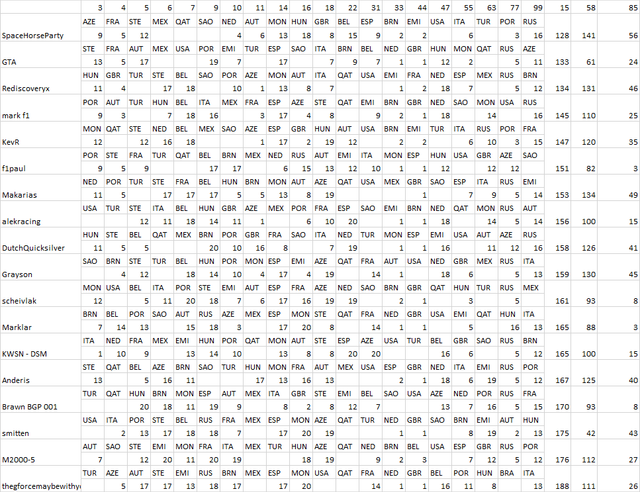 It's SpaceHorseParty still on top. GTA is close but has some drivers who are expected to get better results still to go.

Note: All Japanese GP predictions are transferred to Qatar GP.

So I'm near the bottom of the standings but still have Mazepin scheduled for a future race. 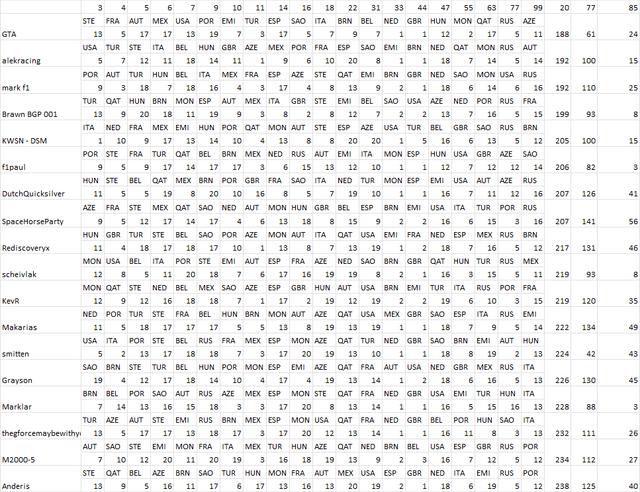 Two races to go and here are the standings.

Each member will choose one driver for each remaining race, a different driver for two. The better of driver's result will be counted for overall standings. So if Anderis picks Perez for Saudi Arabia and he finishes 3rd, the points will decrease by 14. (as Perez has 17 points in current prediction of the member). If Perez will end up 20th, (through being first retirement of the race) points will remain the same.

So two remaining races, copy/paste this and add drivers preferred.

I plan to notify everyone who has not made predictions by next week.

I think my choices are clear cut:

Not expecting much though.

It seems all the good luck I had in the Shareholders game is being balanced by bad luck in this game.

Fun fact- if we all chose our guesses at random, the average expected score would be 210. But our actual average score is 214. So it seems we're neither particularly skilful nor lucky at this game.

Well, those of us who are scoring less than 210 might argue that we are skilful at this game and those who are higher than 210 are not...

A case could be made that I'm the least skilful of all and drive the average down. I'm however very curious what skill makes you able to predict events such as Perez having his only DNF of the year in Hungary half a year in advance.

Well, those of us who are scoring less than 210 might argue that we are skilful at this game and those who are higher than 210 are not...

Strangely that makes me skillful.

Well luck wasn't on my side with with two 20s, two 19s and two 16s (Latifi, Mazepin, Leclerc, Gasly, Stroll, Alonso and Schumacher). Though Schumacher's 16 was kinda lucky. So I could have been around 205-210, which is the average.