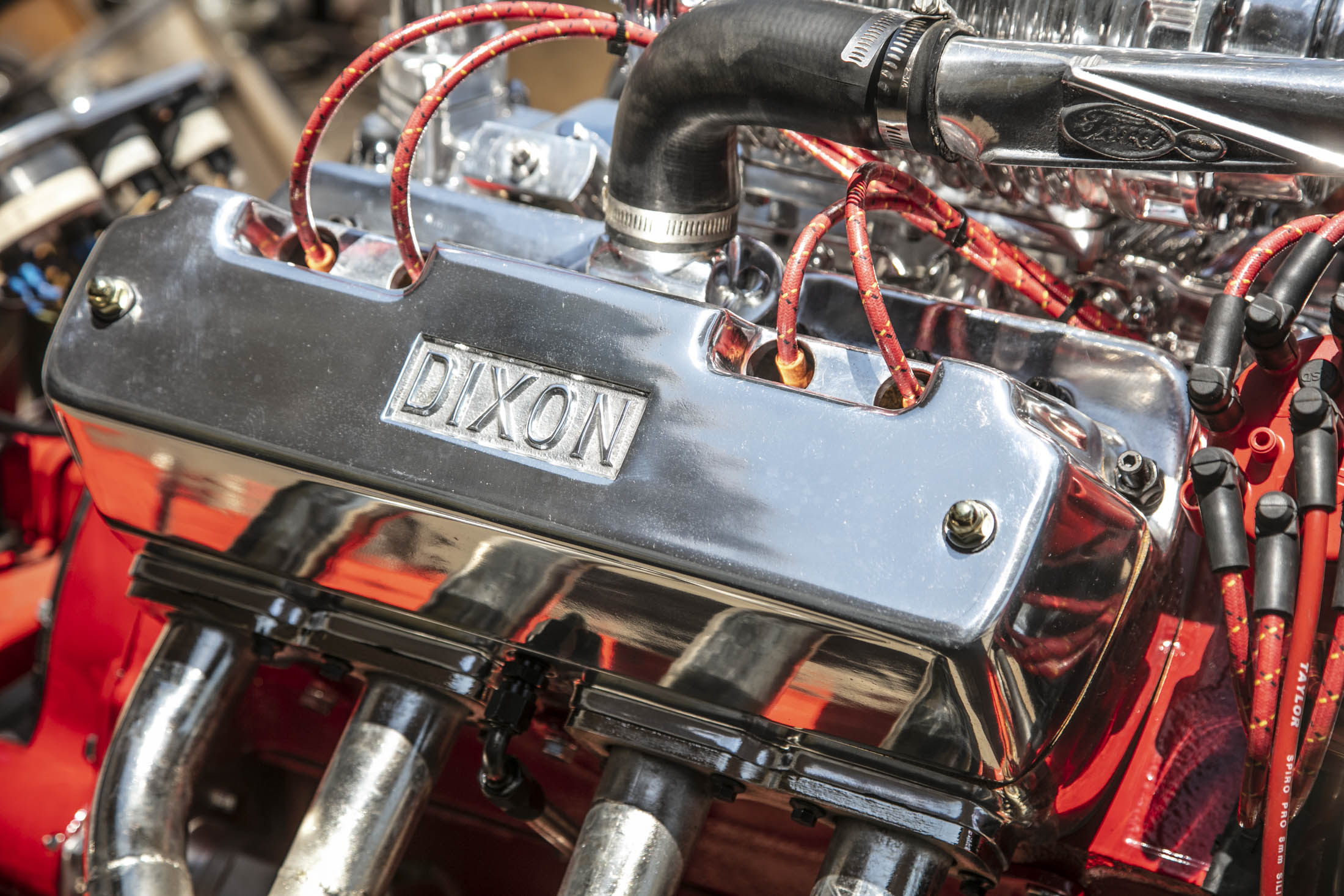 There were thousands of them cheap.

New ohv were not tearing up flat tracks or speed runs, at that time.

Thanks Bob. So there is no current market for OHV conversions - just some historical interest - yesteryear's aftermarket.

That is a bit like asking someone who drives a car from the 1930s  (or whatever)  why they do it when a modern car is so much better.

An internet friend of mine used to commute through LA in a model T.

An internet friend of mine used to commute through LA in a model T.

Very brave. I have ridden in a T and the brakes are a suggestion of retardation.

I guess for HotRodders the Ford core was cheap. And accepted.

By 52 or 53 the sidevalve was history,, but 65+ years later people are still racing them. Though an early 50s Caddy was never going to be as good as the Mopar hemis, SBC and Y block, all available in 53 up. Though ofcourse very little hot up parts available.

These days however quite expensive wheras SBC, Windsor stuff is available at the chemist shop. Cheap!

Though SBC stuff is getting harder to get as everyone is playing LS.

No self-respecting hot-rod builder would use a small or even stock-type (non-mountain displacement) big-block over an LS if they were pursuing power. They are now officially in the realm of the flat head - used by people who want period appearance, or for tradition or because that’s what they know. It’s not that those engines can’t be quick but all things are relative and the LS has moved the bar rather substantially.

I’m sure they’re out there somewhere but the ratio of LS engines in drag-racing Mustangs to Coyote engines in...whatever GM people are running is heavily skewed in the LS’s favour. Not unlike the number of Chevy small-blocks in cars once powered by flat head Fords.

The LS family has no power advantage over a small block except larger source  of better factory cylinder heads due to hype and money Chevy put into it during Corvette race program, it is no smaller or lighter in alloy versions.

Chevy (GM) hyped the LS hugely for a decade.

The ignition set-up was an advantage but you can now buy gear needed to run an LS with a distributor, and DIS systems for older cars.

The fact the LS is what it is has little to do with it being a better engine but the result of GM spending money to hype the market.

Magazines get ad money from factories depending on how are hyping what the factory wants them to hype; if Chevy is pushing the LS powered Corvette they sure as hell are not going to run a lot of articles on the best of the old small block which is probably why now that Chevy has the LT, in the Corvette,  the LS hype is greatly reduced and more articles are showing in hi-po magazines about other engines with the " new Dodge " Hemi is now get a LOT of hype in magazines.

I wonder if Dodge now  pushing hard on the radical Hemi powered Challengers and Chargers has anything to do with that.

I was surprised to see an article recently of what it takes to hop up the iron block, truck,  version of the LS recently though.

There is a large variety very high performance factory cylinder heads for the small block but they were  created for the NASCAR versions of the small block, which means they are not cheap nor common.

After market, variety is HUGE.

A Chevy big block can easily out perform either the small block or LS with far less effort and in alloy versions small weight gain.

Small block Ford canted valve versions match or exceed any thing Chevy has, and the fact Ford used the tall block Windsor version in NASCAR as long as they did shows as far as horse power there has never been a better U.S. push-rod engine.

There was an article in  Race Engine Technology several years back and the people from Ford were divided over building the new NASCAR FR9  or staying with the Windsor;   the FR9 won because the money to develop it was already in the budget so why not do it.

They had compared the two head to head and the FR9 had no performance advantage.

The canted valve Ford was superior to the point over the Chevy small block that the Canted Valve heads are no longer allowed in WoO racing, and the new Ford  dedicated sprint car engine was forced by rules to use a wedge head; although WoO is now semi-spec., the same cancer that has made most racing same ****, different pile.

To show the LS had not ruled engine builders world.

A Chevy big block can easily out perform either the small block or LS with far less effort and in alloy versions small weight gain.

With respect, as I'm always open to new information, this doesn't seem to be borne out by the marketplace. There's a reason that it's become so utterly cliche to do an LS swap. Now I could be wrong but it doesn't seem likely that in a world where almost any engine is available from any source - import, domestic, European - that all of these people are swapping in LS engines because they're all diehard Chevy fanatics such that they're passing up cheaper (or equivalent) engines that produce more power. That doesn't make sense.

Very brave. I have ridden in a T and the brakes are a suggestion of retardation.

I have a stock 1926 Ford T roadster and I can tell you that 42 mph in it is more frightening than 185 mph in a Corvette. Four contact patches the size of a half-dollar.

I suspect he was spinning a tale, on thinking about it.