Officially announced a little over two years ago at an event in London, Extreme E is about to become a reality.

And it’s pulled in some serious names from the world of motorsport to back up their serious ambition.

The idea is reasonably simple. It’s electric off-road racing in some of the most extreme and remote areas in the world - areas damaged by climate change. Teams are comprised of one male and one female driver who share duties equally. The entire race day infrastructure and transportation network has been designed to have minimum impact on the environment. They transport all their freight on a former Royal Mail Ship, the St Helena, and the tracks are marked out with flag gates. Cars are charged up by green hydrogen fuel cell generators. Extreme E also hosts climate research programmes and carries out legacy programs to help combat the effects of climate change.

Who will be racing?

ABT Cupra XE | No. 125 | Mattias Ekström and Claudia Hürtgen
The long-running association between ABT and Ekström continues in Extreme E, joined by GT and touring veteran Claudia Hürtgen

Where are they racing?
There will be five events through the year facing Desert, Ocean, Arctic, Rainforest and Glacial conditions:


What’s the race format?
It’s following a general round robin format with qualifiers, semi-finals and finals. Drivers from each team will each complete one lap before handing over to their teammate to complete the second lap.

Where can I watch it?
For Extreme E’s  summary of the event timings and broadcast options click HERE

The first event timetable is as follows (times in GMT):

What can I expect?
….. I actually have no idea!  I guess we shall find out. 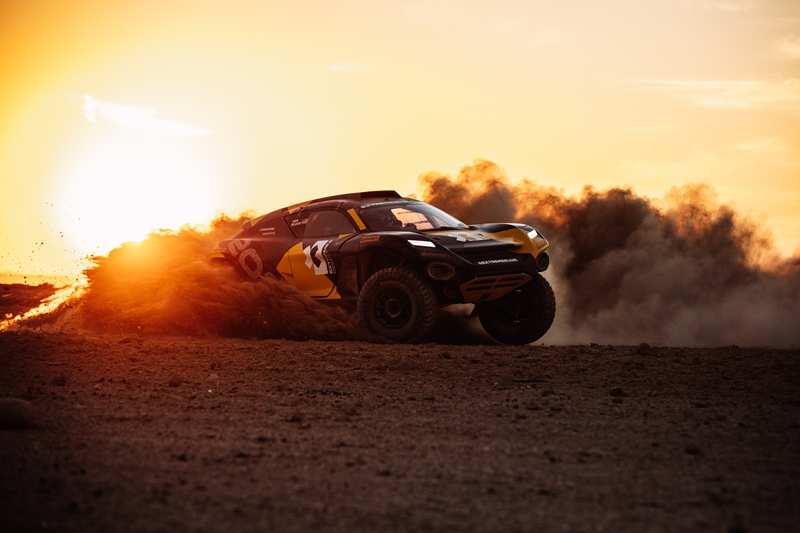 Here's the thread containing all of the news and discussion from the earliest rumours of this series up to today:

And here's the livestream of the shakedown session from earlier today:

Nice one Ben.
I’m kinda curious but as it’s Round 1 Season 1 I won’t be too judgmental.

Really a new chapter in Motorsport and curious to see how it will look tomorrow & on sunday as the things gets serious.

The track looks stunning, with some huge elevation drops. 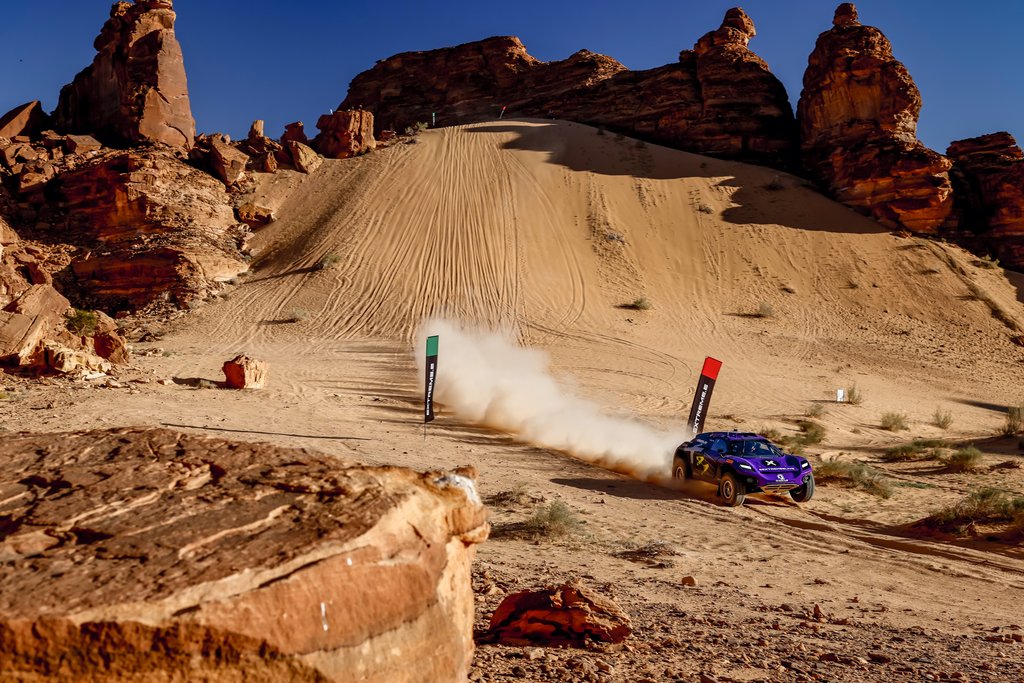 It's definetely a challenge, and Chip Ganassi already starts on the backfoot!

Kyle Leduc shunted his car into a rock, big damage & a lot of work to do overnight. 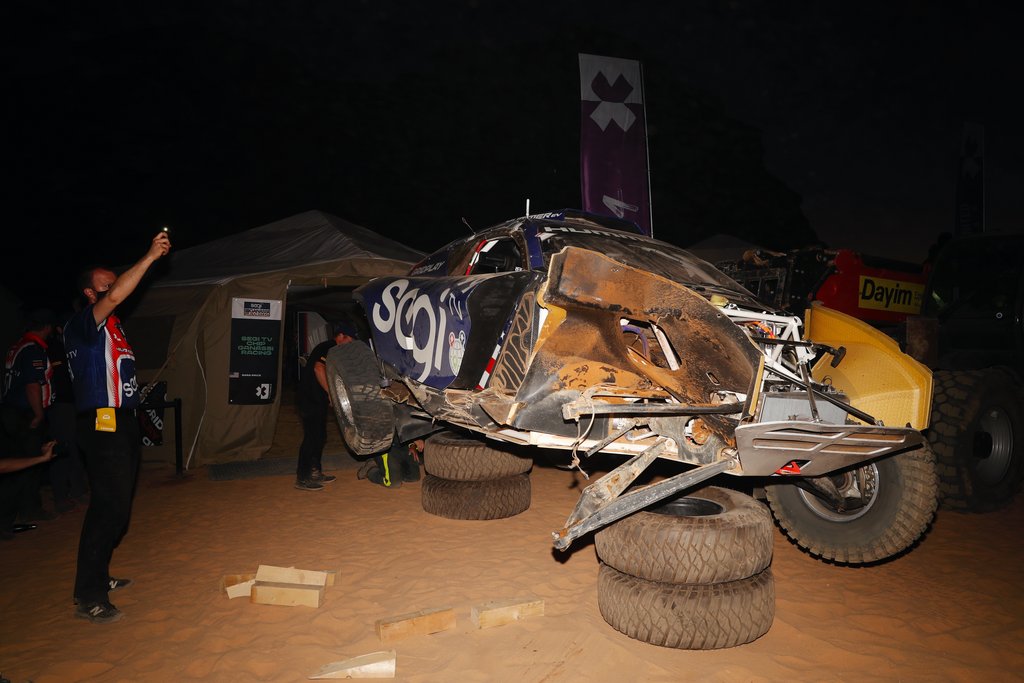 And bit of a VLOG from Oliver Bennet, driver of the HispanoSuiza Team

Just watched the two preview episodes on Sky 👍 well up for it, love the 50% women/man thing, and the fact they have a "legacy" team at each venue devoted to fighting environmental issues in the area

Also glad they got a good long segment on Top Gear, hopefully this will attract some audience

Really curious to see how this turns out. It's really exceeded my expectations in terms of the calibre of participants and level of coverage.

The track looks pretty spectacular in all honesty, and that massive elevatin change is a hell of a feature.

Now we find out how it actually works as a broadcast product.

Is not a sentence I was ever expecting to write...

Loeb about to start!

What happened to Buttons run? Isn't this live? Did he go first?

Damn, there's a LOT of money into the production of such a starting series.

I'm already sold on it now

What happened to Buttons run? Isn't this live? Did he go first?

I think this is on delayed/edited replay, they made reference to it being 07:00 local time which would have been 5am UK time.

I generally dislike non-live stuff, but to be honest there's a better chance of me getting up at 7am than 5am these days

All of this is sooo fresh.

My gratitude for the great OP, Ben!

Loving it so far

Mad lap from Munnings with that puncture

Aaaaand another, different shade of 'go big or go home' mode from Sarrazin.

Quali over for the Veloce esports

Well I wouldn't describe this as boring

Sainz now on the course

Good so far,except the not live part,but i understand it.

Button was behind Loeb before switch,around 20 sec for sure hard to tell not enough timing info.JB switched at 5:30(2. driver at the door),Loeb stopped around 5:00-5:10 then 2. driver running to car.

Edit : and the car before end stopped,had to restart thats why the +1:30m time

A bit of a shame we don't have sector times?

time to eat humble pie: this looks way more amazing than I thought

Do you think there will ever be a day where Sainz wakes up one morning and thinks 'you know what, I think I'll do something else bar some rallying today'.

A bit of a shame we don't have sector times?

I do like the whole show and idea. But the fact that you really have to wait for the end of the lap to see how good someone is tends to make it less trackable/interactable.

Gonna continue watching though. Race should be brilliant

Oh, now there's some timing during the lap (shows gap to leader).

Is someone from the sport here in the forum?

We seem to be getting live splits on the second laps?

Oh, Nico is on the ground on location

I was however apprehensive of Rosberg's lineup as Kristofferson is a BEAST.

Nico's interview as boring as being a F1 driver. 'It's still a long weekend, we learned a lot bla bla bla'.

Come on Nico, this is exciting new stuff, give us a bit of enthusiasm and better than you standard media quotes!

Nico's interview as boring as being a F1 driver. 'It's still a long weekend, we learned a lot bla bla bla'.

Come on Nico, this is exciting new stuff, give us a bit of enthusiasm and better than you standard media quotes!

Probably the slowest person on the course yet?

Although clipping that flag just now was very cool haha

Woohoo! Go Molly. That’s commitment. Doin’ it for the Aussies!

That was a massivveeee roll by her, damn, how did that happen??

Oh crap. I hope Claudia is ok. That was big.

2 rolls out of 8 cars on the track, that is a very high percentage.

Course too dificult, or are they taking too much risks?

Can anyone beat Team Rosberg's time in this Quali 1?

2 rolls out of 8 cars on the track, that is a very high percentage.

Course too dificult, or are they taking too much risks?

Could be a mix of difficult course, competition risks and a relative lack of practice time?

Damn, there's a LOT of money into the production of such a starting series.

I'm already sold on it now


Agreed. Their production team have done a super job so far, especially on the live coverage.

Zonca with the right amount of hype and attitude right there!