WTCR season and everything TCR worldwide 2021


54 replies to this topic

As the BTCC race #3 at Thruxton came to a competitive close, I got reminded that there was other Touring car fun happening around in the wider Motorsport world, namely the first round of TCR Europe at the Slovakiaring.

You can enjoy the races here:

Feel free to post anything from any TCR championship from all across the globe, big or small here on this thread alongside the main WTCR content.

Oh, are they still flogging this dead horse?  I had hoped it had shuffled off into the shadows and died.

If I think back there a tcr Australia now

Oh, are they still flogging this dead horse?  I had hoped it had shuffled off into the shadows and died.

I'm not sure what you're talking about. TCR has created affordable touring car racing in many regions. OK, WTCC died out. But touring cars never seem to work on a global level like that. It was never going to challenge the BTCC because the NGTC regulations are very strong. But as a European category (something which traditionally does work) it seems to be going OK.

TCR has been a flop.  It hasn't produced good racing, just processions with occasional bouts of car damage.

I couldn't disagree more, BRG. It has proliferated Touring Car racing all over the globe similarly to GT3, just with less coverage, kept the WTCC alive in another skin and brought in so much new talent.

What bitterness?  It is a poor racing series. Aren't we allowed to say so?

It is no worse (in terms of spectacle) than any other racing series around, not particularly processional, not crazy overtaking everywhere either. And WTCR seems to have locked an 18 car grid full time at least, which is not that bad considering things looked grim at the end of last season (with Hyundai threatening to quit to focus on ETCR, Lynk & Co considering downsizing to two entries and Audi supposedly out of the TCR equation VW-style —until they decided to resume development on the evo version of the RS3)

Oh, and I've been watching TCR Australia in Motorsport.tv and that has been pretty exciting TBH

What bitterness? It is a poor racing series. Aren't we allowed to say so?


Don't be ridiculous, of course everyone is allowed to criticize and voice their opinion.

Saying stuff like flogging dead horses and shuffling off shadows to die does however sound enormously bitter. Take a step back and read it out loud my dude.

Don't know what's up with all this rigid defensiveness and passive animosity.

WTCC is crap the race distances are awful 12 laps or 8 lap races  whats the point throw in safety cars hardly any racing.

Don't be ridiculous, of course everyone is allowed to criticize and voice their opinion.

Good. Then kindly stop with the garbage about 'bitterness'.  It is nonsense.  What on earth do I have to be bitter about, even if WTCR is rubbish?  It is no skin off my nose.  It is just my opinion.  But you seem to be bitter about that...

Good. Then kindly stop with the garbage about 'bitterness'.  It is nonsense.  What on earth do I have to be bitter about, even if WTCR is rubbish?  It is no skin off my nose.  It is just my opinion.  But you seem to be bitter about that...

I don't know, but it doesn't seem to stop you from coming here and slagging the category off for no reason. That kind of negativity isn't born out of nothing.

I don't know, but it doesn't seem to stop you from coming here and slagging the category off for no reason. That kind of negativity isn't born out of nothing.

No reason? I have an excellent reason.  WTCR isn't any good. That's what it is born out of.  The formula hasn't provided good racing.  It's a World Championship and we deserve better.

If nobody is allowed to say so, then it will just go on being rubbish.

I'll post as many W & TCR races on here for those interested in Touring Cars that are not the BTCC and all are welcome to voice improvements and qualms.

With that being said, there's a obvious difference between criticism and malaise. Can't let you stumble in here and take a good ol' nasty s*** in the middle of the room without calling you out.

Cause and effect - If you decide to bring that kind of negativity anywhere, don't be surprised by the pushback. Your words, your decision. Moving on.

The interesting thing is that nobody has spoken up for WTCR, it has all been 'bad, negative BRG'.  You  may count this messenger as well and truly shot.

Wow, Huffy is back in WTCR with Zengő Motorsport and Cupra, this is huge news for Hungarian motorsport, a WDC in our most known team is a pretty big deal.

Btw, it's also hard for me to understand this general 'every other form of touring cars beyond BTCC is pointless and should question its own exsistence' consensus here. There is human life outside the UK as well, you know. For example, on the other side of Europe, both WTCR and DTM are hugely popular, meanwhile the BTCC has zero coverage and kinda has a bad overall reputation regarding driving standards, to put it mildly.

Nobody has even mentioned the BTCC in this thread.  Why so defensive?

And incidentally, the BTCC's driving standards are pretty good these days due to proper enforcement of the rules, so your little poke is rather off-beam.   Oh, and had you noticed that the DTM just collapsed and is now a GT3 series?

Btw, it's also hard for me to understand this general 'every other form of touring cars beyond BTCC is pointless and should question its own exsistence' consensus here. There is human life outside the UK as well, you know. For example, on the other side of Europe, both WTCR and DTM are hugely popular, meanwhile the BTCC has zero coverage and kinda has a bad overall reputation regarding driving standards, to put it mildly.

It's not a consensus by any means. It's just one rather grumpy individual.

Though it sounds like you last watched the BTCC in 2005. It has live coverage on terrestrial TV and driving standards are enforced nowadays.

I can see why someone would not like Wtcr, but the TCR concept in itself, and the various series all over the world, is exactly what touring cars needed at that time.

Wow, time flies this year, the WTCR season opener is next week at the Nordschleife of all places. I wonder how much of a challenge it is to return to racing at the Green Hell after a six-month break. The field certainly looks stronger and more balanced than last year, the calendar is also promising, we have two new models, hopefully it will be an interesting season. Unfortunately, it looks like the usual moaning has already started by Lynk & Co about the new Elantra's BoP, so we will get that kind of stuff as well.

EDIT: well, they call it round 3 cos it's the third race of the season (on the second racing weekend of the year for the series), but you get me

So WTCR 2021 season first round is here with us. Néstor Girolami qualified on pole for race 2 ahead of Vernay and Guerrieri. Müller gets pole for race 1 (reverse grid) ahead of champion and nephew Ehrlacher. 3 Hondas, 4 Hyundais, 3 Lynk & Cos, no Audis and no Cupras in the top 10.

Fantastic racing and a famous win for Monteiro. So happy for him. I thoroughly enjoyed that ^^

I'm a bit bitter about Norbi's start, but quite fun race regardless, probably the best on the Nordschleife so far. Happy for Monteiro as well.

Now that start was messy. Unforced errors and poor judgement all over the place. 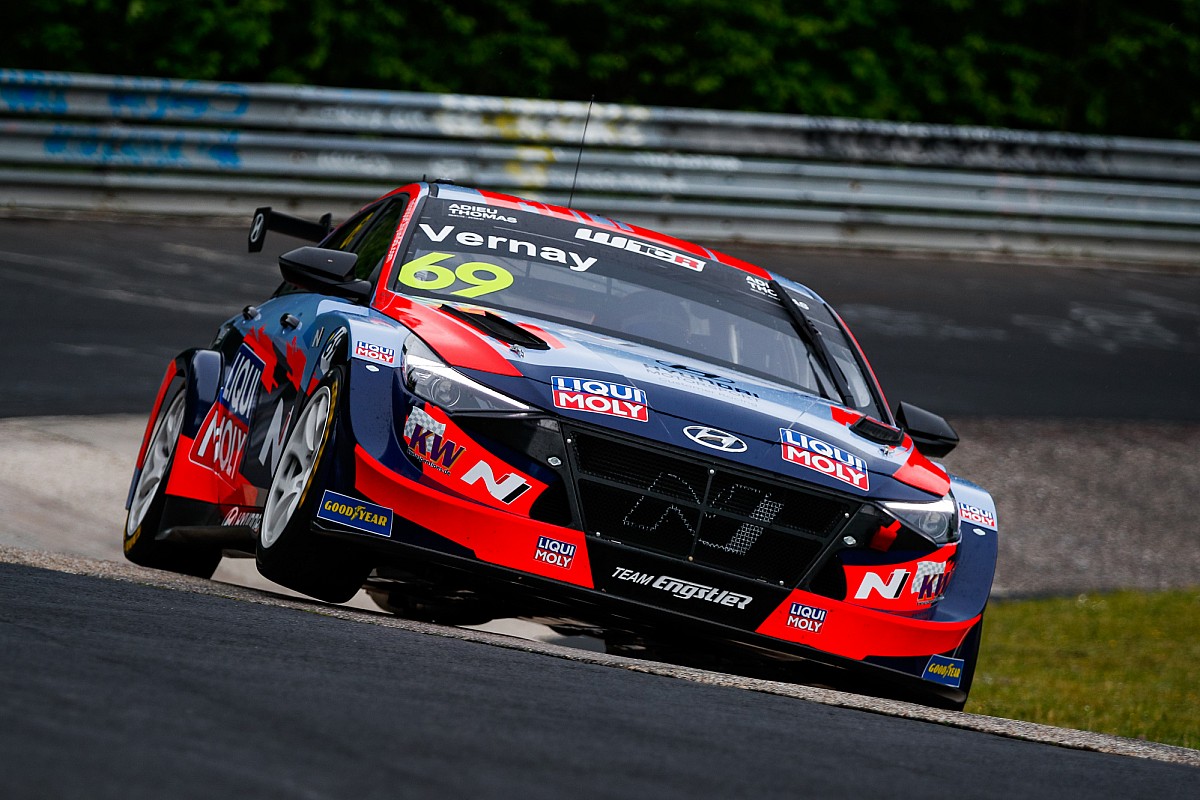 Yaknow what ? This is a cracking touring car, and picture as well.

I am supporting JK Vernay this year. I still miss him not driving an Alfa. That was epic.

Happy that the season started and looking forward to more.

Pure ETCR gets going this weekend with its first ever round at Vallelunga. Will be interesting to see how well the electrified TCR rules works, especially since the plan is to start to export the technical model out to various regional and national championships to make electric racing more widespread and more accessible.

And 2/3 of the field is getting prepared by Hungarian teams, what the heck.

The race format they've gone for is a little strange, but perhaps it will work quite well. I guess we shall find out this weekend!

First ETCR broadcast is in 1 hour

Ok so that’s an audio only live stream!

Visuals are on Eurosport channels.

I tuned in to see the three cars very far away from each other, so my initial impression was a bit strange, but then it turned out there was an accident in pool B.

Seems like they’ve got a basic push-to-pass style system which they can use at will through the race?

The grid is getting set up for the WTCR Race #1 at Portugal! On Eurosport 2.

Was busy today and couldn't be here to tend to some Touring Car hype but some nice soothing WTCR races in Aragon. After so much Aragon in last year's season I wasn't to keen on it to be honest but cool to see Vervisch win in that great lookin' #22 Audi and also the Antedilluvian entity himself, Gabi Tarquini wins his first race in 2 years marking his 8710th year of competitive wins in Racing.

Most, Sochi and some circuit called Pau-Arnos which doesn't seem to be the famous Pau street circuit are confirmed as replacements

I was a bit busy giving my energy and attention to a damp mall car park outside of Istanbul but WTCR is back in action at Most Aufodrom!

F1 was when Race 1 was happening but Race 2 is live in exactly 20 mins time since writing this. Enjoy some Touring car action y'all together with the BTCC at Donington!

A couple of weeks ago there was the Monza round of TCR Europe and watching both races I remembered people saying TCR is boring and does not produce entertaining racing alla BTCC because those races really were exciting (the Azcona - F. Girolami rivalry got real hot). Azcona deservedly won the title this weekend at Barcelona (last round of the season) and skipped Sunday's race to be at Most on WTCR duty (where he took pole for race 2). Right now there's a red flag with Norbi having passed Mikel for the lead at the start but several cars are out of the race for typical first corner chaos.

I've read that Monteiro missed today's running due to feeling unwell and now he's been hospitalised, any more news regarding that?

Bacterial chest infection it is, hopefully nothing too serious:

Rain, and a first lap monumental crash by Guerrieri.

Title goes to Erlacher, another great season for him

Seriously, how can they mess up so badly the communication about the schedule everytime ?

Yeah, it was an unusually intense finale, the rain helped a lot.

Some odd mistakes here and there, but I was happy to see the Zengő guys getting some success after a pretty difficult season. I mean, it could have easily been a double 1-2 here as well, so even this weekend was a sort of missed opportunity.