From the BRDC this morning:

With great regret we have to advise Members that Life Member John Wagstaff died on Wednesday 26 May at the age of 88. He had been suffering from Alzheimer’s for some time. Proposed by his Team Elite team mate and Lotus F1 driver Trevor Taylor, and seconded by a self-effacing James Clark Jnr, John was originally elected to Full Membership in 1963 and served as a Board member from 1992 to 2002.

John was most associated with Lotus cars although he began racing with his road car, a Triumph TR2, in 1956 at Mallory Park, his local circuit. Encouraged by some good results in 1957 against purpose-built sports-racing cars, for the 1958 season John acquired the ex-Tommy Sopwith/Gawaine Baillie 1.5 litre, Coventry Climax FWB-engined Lotus Eleven and began to make his mark on the national scene.

During 1959 the mercurial David Buxton, the Lotus dealer for central England and based in John’s hometown of Derby, hatched a plan to run a team of the new Lotus Elites in national and international sports car racing including the Le Mans 24 Hours, with works support. Colin Chapman, who was fully occupied with Team Lotus in Formula 1, welcomed the idea and so Team Elite was born, John and David being joined by Liverpool Solicitor Bill Allen who had been campaigning a Lotus Eleven and latterly a Formula 2 Lotus Type 12.

Team Elite’s first appearance in April 1960 at Oulton Park rewarded John with third place behind the Elites of Chris Summers and Tommy Dickson before a trip to Montlhery for the Coupes de Vitesse provided Team Elite with the first two places ahead of numerous Alfa Romeo Giulietta Sprint Veloces, David Buxton finishing ahead of John. A week later at Aintree John claimed a notable third place overall, and victory in the 2-litre GT class, behind the Aston Martin DB4GT of Jack Sears and Dick Protheroe’s Jaguar XK120. For the Nurburgring 1000 Ks John was joined by Team Lotus F1 driver Alan Stacey to win the 1300 cc GT class and finish 20th overall in a field of over 60 starters. A month later Alan lost his life in the Belgian Grand Prix at Spa-Francorchamps after being hit in the face by a bird. One week after the ‘Ring Team Elite had been at Spa where what looked likely to be a great success turned into disaster when John was caught out by the vagaries of the Ardennes weather at the penultimate corner of the last lap and spun off on the unexpectedly wet road surface. The closely-following Porsche 356 Carrera of Karl Braun veered sideways only to be knocked straight by Bill Allen in the second Team Elite car whose car barrel-rolled before coming to rest upside down in a ditch while the Porsche carried on round La Source hairpin to win.

For Team Elite’s first foray to La Sarthe in 1960 John was joined by multiple British Hillclimb Champion and accomplished Formula 2 driver Tony Marsh, the prime objective being to win the 1101 to 1500 cc GT class. A year earlier the ACO had introduced an Index of Thermal Efficiency and, for this second year of the award, the prize money for the winners was second only in amount to that won by the overall winners of the race. At the end of the 24 Hours, John and Tony were declared winners and happily accepted the prize money. However, they had not won their class which had been taken by the French-entered Elite of Roger Masson and Claude Laurent who had finished one place and four laps ahead of the Team Elite car. Seven days later, after the ACO had carefully gone through all the time sheets and lap charts, it decided that Masson and Laurent were indeed the winners. However, reimbursement and return of the trophy were not requested, the ACO forking out the same rewards for a second time to give to the French drivers.

In 1960 the Team Elite cars had sported a dark British racing green livery but for the following season the team’s Elites appeared in what has become the iconic white with one broad and two thin green stripes along the length of the bodywork. Under the team’s chief mechanic Ron Bennett, the cars were superbly prepared. In the famous race at Oulton Park in April 1961 which gave the sensational new Jaguar E-type its first victory in its first race at the hands of Graham Hill, John’s sixth place overall behind two E-types, two Ferrari 250 GT Berlinettas and an Aston Martin DB4GT was rather overlooked but it was a notable achievement. As various personalities came and went over the next few years, John stayed at the helm of the Derby-based team, overseeing its re-launch as Team Elite ’62. For the 1962 Nurburgring 1000 Ks John was joined by Pat Fergusson to finish 16th overall and second in the 1300 cc GT class whilst in the Montlhery 1000 Ks at the end of the season, this time with Gil Baird as team-mate, John again finished second in class to the very rapid Simca Abarth of Hans Herrmann and Mauro Bianchi.

John and Gil were together again for the 1963 Nurburgring 1000 Ks where they won the 1300 cc GT class and finished a remarkable ninth overall after being joined for the later stages of the race by Trevor Taylor and David Hobbs whose sister car had suffered engine failure. At Le Mans a month later John was joined once more by Pat Fergusson, the former Colditz prisoner giving himself plenty of spadework on the very first lap of the race when he went off into the sandbank at Mulsanne corner. Despite this early setback John and Pat pressed on to such good effect that they finished the race 10th overall and winners of the 1300 cc GT class. At the end of the year John headed for the Nassau Speed Week where he won his class in the Governor’s Trophy and finished 16th overall.

By 1964 the advent of Colin Chapman’s new brainchild, the Lotus Elan, meant that the writing was on the wall for the Elite in the main international and national races. At season-opening Oulton Park John finished fifth behind the Elans of Jimmy Clark and Graham Warner, and also the Elites of Chris Ashmore and Derek Bennett. At Zolder in July John was an honourable ninth behind eight 2-litre Porsche 904GTSs whilst in the 2-litre race supporting the RAC Tourist Trophy at Goodwood a month later John’s Elite was the first 1300 cc car to finish but was eighth overall behind the Elans and Porsches. At Le Mans, this time with Clive Hunt as team mate, the now outpaced Elite’s swansong produced a sixth class win for the model in 22nd place overall, albeit there were no other starters in the 1300 cc GT class!

This was not John’s last appearance as a driver at Le Mans. In 1967 he shared a Team Elite Lotus 47, the racing version of the mid-engined Europa, with David Preston. After breaking his back in a bobsleigh accident at St Moritz during the winter, John was obliged to wear a plaster corset during the April test weekend. Come the race, the brakes proved troublesome but it was the head gasket which failed after just three hours, precipitating an early retirement. The 47 was retained and raced regularly through 1968, principally driven by Trevor Taylor, but was now up against the Chevron B6/B8s with their 2-litre BMW engines so success was hard to come by. After so many years with Lotus machinery, a Lola T70 Mk 3BGT was acquired for 1969 and raced in a plain blue livery since the original iconic white and green colours had been taken over by Sid Taylor. Best result was victory for Trevor in the RAC Tourist Trophy at Oulton Park but it was on a desperately sad occasion as the race had to be stopped short when Paul Hawkins’s T70 crashed in flames at Island Bend and the popular Australian was killed. Team Elite saw out the season, Trevor finishing sixth in the Swedish Sports Car Grand Prix at Karlskoga, but closed its doors for the final time at the end of the year. John had been there from the beginning to the end. Without his enthusiasm it is doubtful whether Team Elite would have endured for as long as it did.

To John’s wife Jill, his daughters Charlotte and Helen and son Tim the BRDC offers its most sincere condolences. 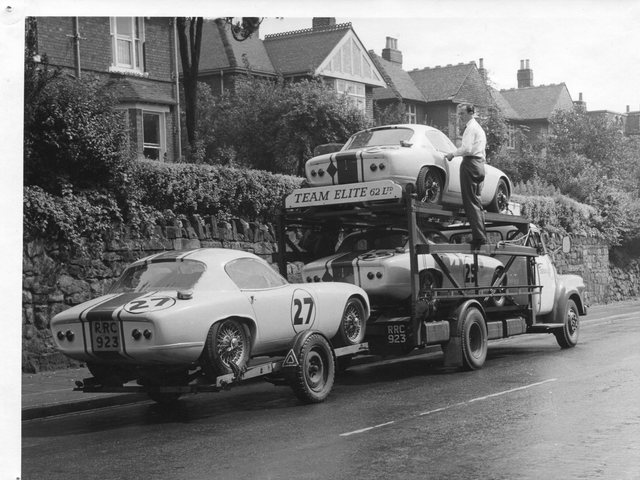 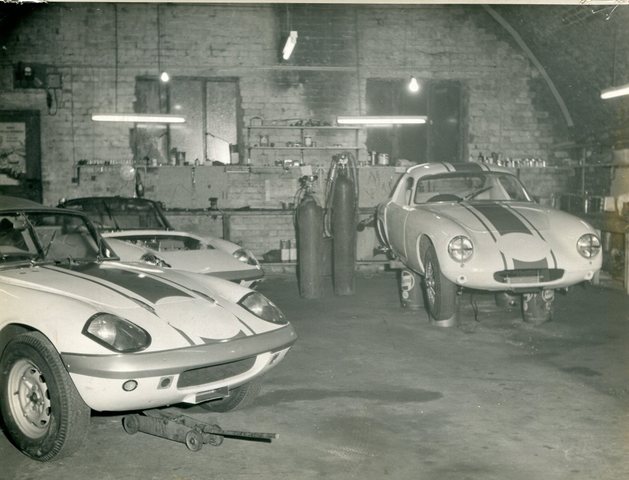 Sorry to hear of the passing of John Wagstaff. I last saw "Waggy" during a visit by Margaret Thatcher to his successful automotive electronics factory. Nice to hear mention of Ron Bennett who, thankfully, is still very much with us. An important part of Derby motorsport history has gone. RIP. 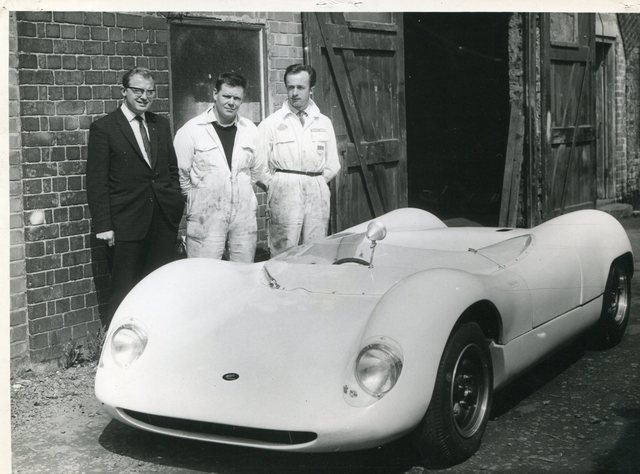 When the team took delivery of the Brabham BT8 that eventually went to Sidney Taylor Racing, along with it's mechanic, Ron Bennett.