A friend and I feel this car is so familiar to us we should be able to recall what it is.  Frustratingly - tip of the tongue style - neither of us can retrieve the identity.  I am confident someone here can put us out of our misery.  Help? 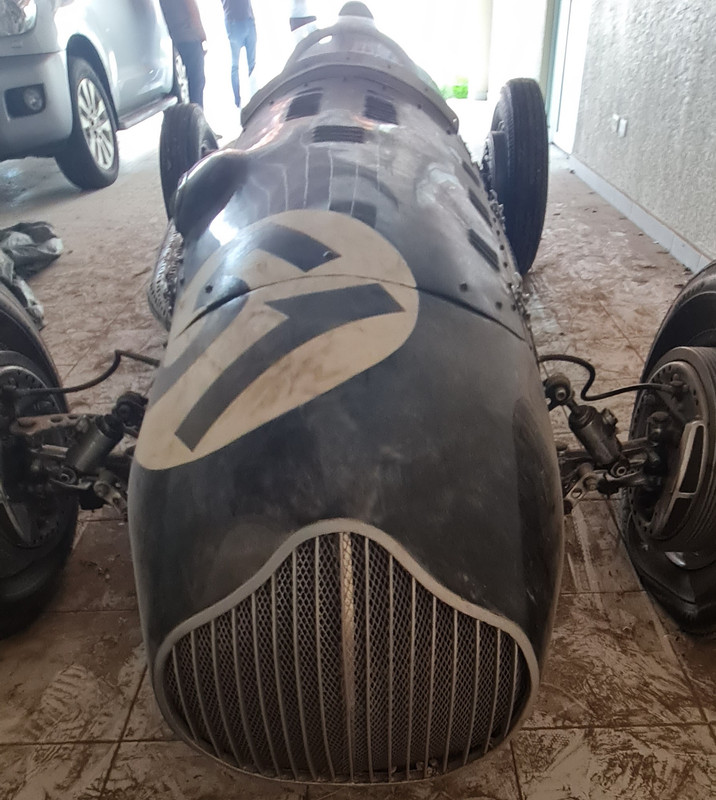 Does your queery originate here Doug?

Nope - not that I know of - a friend sent me the series of photos asking for an ID.  It's bugging the hell out of me...Vanguard Spl, RRA, Peter Darley suggests a mucked about Alta???? - that 'individual' front suspension form, somewhere, somewhen, I have seen this before...  I am confident that those TNFers more up to speed with Historic race entries than I am will recognise it in a flash.

Initially it looked Alta-ish to me, but the steering linkage reminded me of old Indycars, but then, relatively, I know bu**er all about that era. Lack of friction dampers might point somewhere.

The radiator  grill reminds me of Harry Lester’s Lester MG, and I recall hearing that  a Lester chassis was in someway linked to the start of John Tojeiro’s marque.  Could this be some sort of Lester/ early Tojeiro single seater special, rather akin to the cars built by Paul Emery et al in period?.

I don't recognise it but, as it seems to have either a beam axle or swing-axles with a transverse leaf-spring, it can't be an Alta. Looks a bit fancy for a Ford 10 Special but could be something of that sort, perhaps with a Ballamy involvement.

I recommend the photos at Bloggsworth's link above. The more photos you see, the weirder it gets. The build quality of the car is quite varied. There's an electric gauge that looks like it came from a 1970s family saloon, the dashboard generally looks like an afterthought. Then you look at the bodywork and seat which are very well put together. An interesting special in many ways.

(Arghh, this thread has got me hooked now!)

With intake and exhaust bot on the right hand side of the engine, MG and Vanguard engines are logical...

And there is definitely a Bellamy look about the front suspension,.

Various different photos have been posted in several places on Reddit. I’ve tried to gather them all together here, but if anyone knows any I might have missed, please chip in. 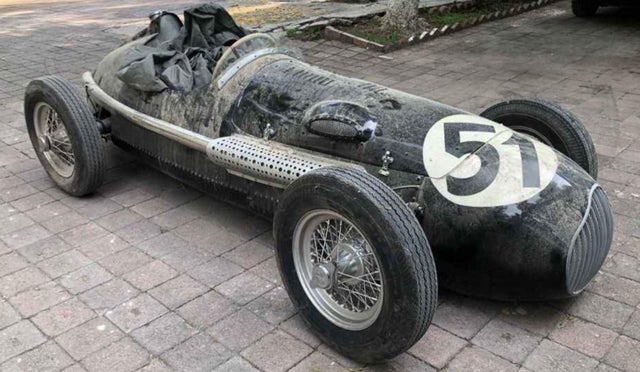 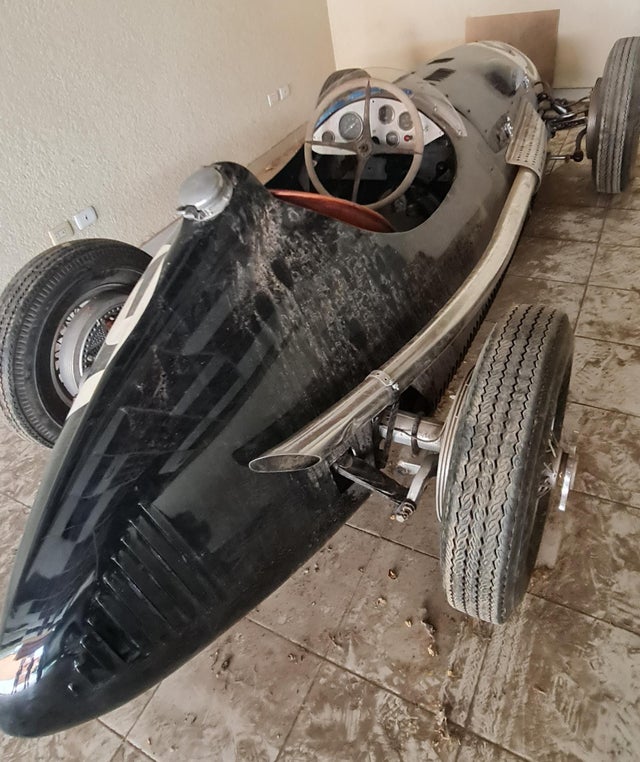 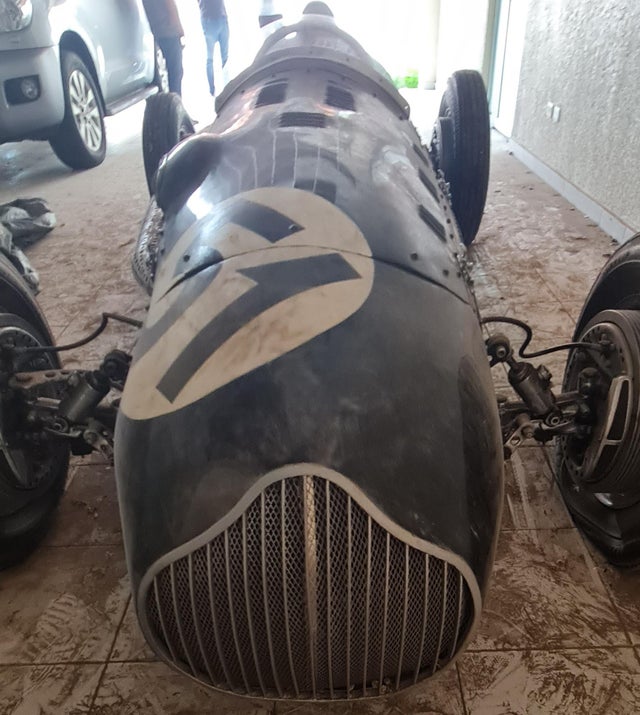 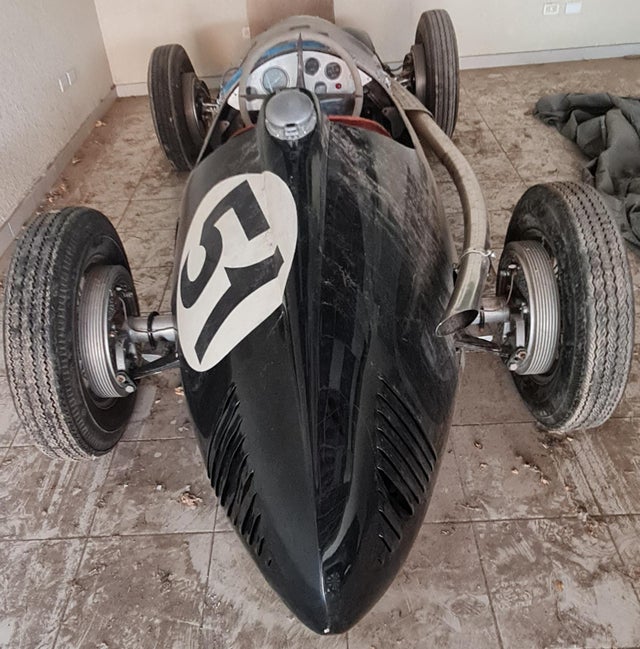 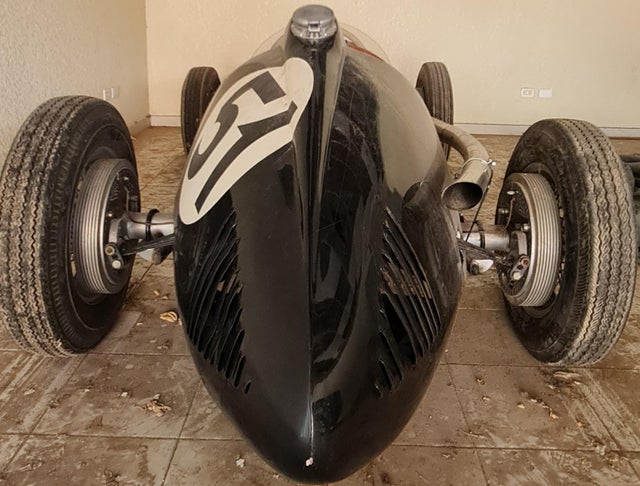 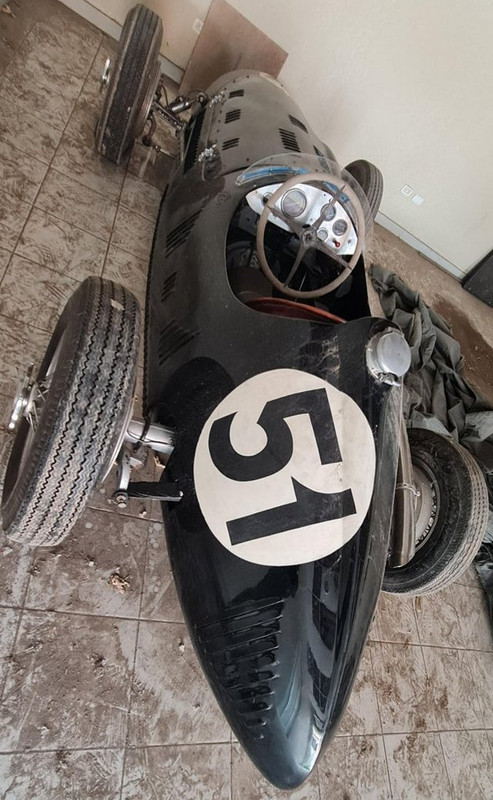 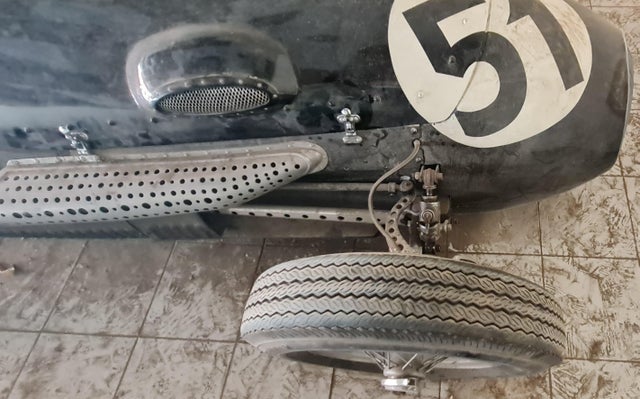 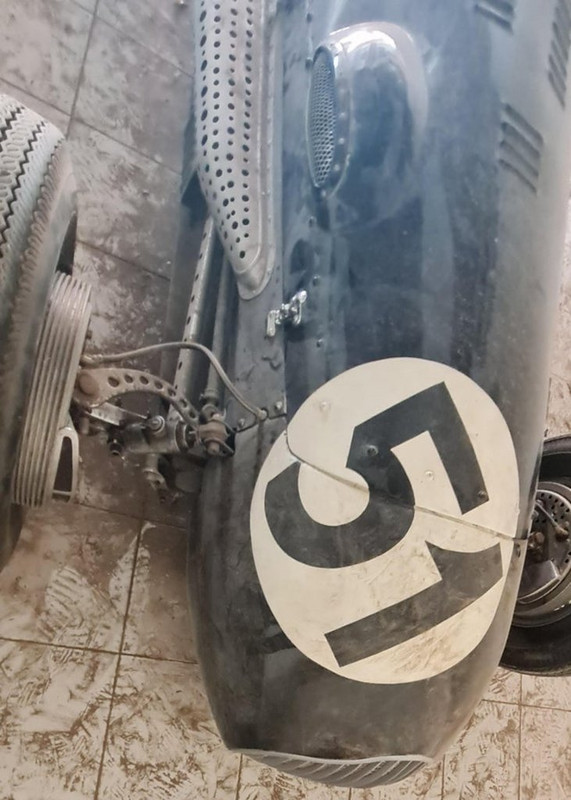 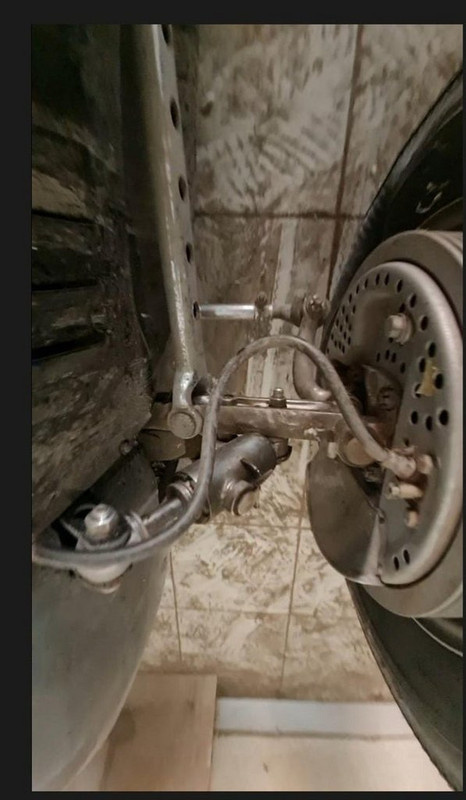 A couple of people have suggested that the engine is a Ford Falcon D21, and Reddit poster ‘background-fluf’, the person who appears to have originally posted these photos, has said the following:

Engine was replaced some time in the 1970's unfortunately ...

The original owner and the only person with complete knowledge of the car passed away and unfortunately the provenance seems to have disappeared into the sands of time, I would dearly love to uncover it's full history once more.

Currently located in North America but not in the USA, believed to have been imported form Europe some years ago.

I keep thinking it's a Mecánca Argentina car, some of which were used well past their sell-by-date. Falcon engines were popular there, too. Can't find a suitable candidate, though.

"The chassis seems to be from an Alta.  It is powered by a Ford Falcón engine.  It should be in Argentina and have raced in F1 National Mechanics (an Argentinean series)
"The first piece of info was given by the journalist Juan Fazzini
"The one about the Alta, by Oscar Filippi - Mar del Plata Navy base spokesman and historian on Cars, planes and ships...".
An Alta was sold to the Argentine and came back to the UK some years ago, then was sold - I seem to remember - to the US.  But I do not recognise the front suspension at all.  Ho hum...

"The different cylinder head clearly doesn’t have the integral log-type intake manifold of the US Falcon sixes."

Page down to engine pic:

If the car is in North America, but not the USA, then presumably it is in Canada? Where is David Birchall when you need him?

'Shorty Wolf' and 'Built by F.H. Sullivan' painted on its flanks. 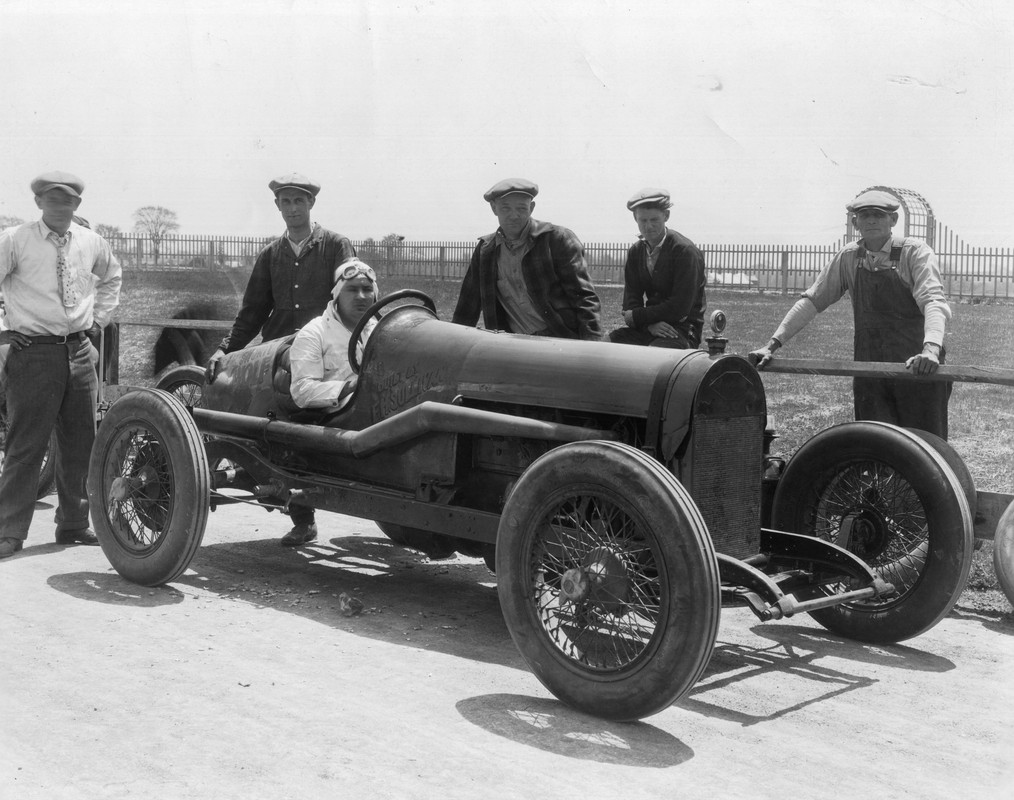 The 1926 season review on Darren's site has a few mentions of Shorty Wolf (sometimes as Wolfe), mainly racing in Ohio. Variously in a Hudson or (once) a Chrysler - the latter possibly wrecked on May 31st at New Kensington PA. One result gives his initials as WB.

Probably coincidentally, there are also results for a Barney Sullivan in a Chrysler, variously in Wisconsin, Indiana and Minnesota.

He also seems to have been responsible for this, the Wolf-Hisso, which looks a tad later: https://kansasracing.../Wolf_Hisso.htm

Shorty Wolf (I always assumed Wolfe to be the correct spelling) was a long time driver, mechanic and car owner from Columbus/OH, starting some time in the twenties, and continuing right up until the fifties. There was a Fred Sullivan, also from Columbus, racing a Fiat and then a Marmon Special in 1919/'20 - probably our "F. H.". Shorty was William B. Wolf in real life, but there was already a Billy Wolf racing out of Altoona just over the stateline in Pennsylvania, so to avoid confusion he was stuck with the sobriquet. This appears to be an early car, so perhaps the Hudson Special he drove mostly though the latter half of the twenties. Later, he also drove Fronties, Chevies, maybe a Dodge Special (could be a confusion with Billy Wolf, though). Around 1935, he built the Hisso Special which became quite a successful car in the hands of drivers like Clay Corbitt and Vern Faler, Postwar, he ran a Vance Special for Faler, Herb Collins or Billy McGee until 1953, it seems.

Barney Sullivan was from the Chicago/Milwaukee area (probably the latter), I don't think there's a connection. One of the early drivers for Billy Schoof, later Indy 500 entrant. Another interesting anecdote, regarding Shorty Wolf, is that he was one of the main perpetrators in the infamous New Bremen riot on September 20 in 1931, along with future Indy 500 winner Mauri Rose. This was a typical independent race of the era, and an argument arose between the leading drivers (Rose, Wolf, Bill Chittum, Larry Beckett, Bob Carey and Mark Billman) and the promoters over the purse. With the stands full and a paltry purse, the drivers went on strike, at which the crowd began a riot, culminating in the burning down of the grandstands - quite a bit of a mess. The police was called in, and Wolf and Rose were arrested on charge of arson - Wolf spent the better part of two weeks in prison, while Rose was released on bail even later. They were both indicted, along with two other participants, in October, but the case still dragged on in November and I never found a final verdict. Perhaps time to look into this again.

"The chassis seems to be from an Alta. It is powered by a Ford Falcón engine. It should be in Argentina and have raced in F1 National Mechanics (an Argentinean series)

"The one about the Alta, by Oscar Filippi - Mar del Plata Navy base spokesman and historian on Cars, planes and ships...".

An Alta was sold to the Argentine and came back to the UK some years ago, then was sold - I seem to remember - to the US. But I do not recognise the front suspension at all. Ho hum...

If the chassis did originate from an Alta it must have been a very early one as the frame is channel section.