Mallala Motorsport Park is celebrating 60 years this weekend 28/29th of August 2021.
There is a few racing events as well a Supersprint and displays of both racecars past and present including Clems Charger Sports Sedan.
And even some RAAF involvement, Mallala like so many venues is a former RAAF base
Spectator entry is $10 I presume for each day and $25 to display your classic. Which may well include my 71 Galaxie.
For anything else see the 'Mallala Motorsport Park' website. Unfortunatly no calender of events on there but for anyone interested in the place or motorsport in general I feel sure it will be worth the trip.
From what I gather entry has to be booked online and the usual Covid forms etc have to be filled in.
As someone who has gone there as a competitor and spectator since the late 70s and my one visit prior the the closure in I think 69 the place has many memories to me.

A real tribute to the men who made it happen...

The SCC of SA and one I know was really heavily involved, Steve Tillett. And then, possibly to a greater extent, the energy and determination of Clem.

Without Clem getting the caveat off the property there would proably be nothing left. Even in the late 70s the place was very rundown. As you would expect from a property abandoned for over 10 years.

I started to do circuit sprints  there in around 78 and even then some of the buildings had been removed or fallen down. Most noticeably the hangar.

Which improved spectating quite  lot. It is what is now the burnout pad inside [the current] turn 1.

The northern hairpin of the original circuit was a little further out into the now crop paddock behind the track.

Clem had an ariel picture of the airforce base taken I believe late 40s in his office. There was also one as it was as a race track in the 60s.

So much of the airforce base is still there. The spectator area toilets are still th originals, though one has had a tinshed built over it!  The parade ground is where the start line is now. The old clubhouse was I believe the mess.There is large drains running through the centre of the infield that had a wooden decking. The half concrete building renmant was I believe the weapons/ bomb store.

The concrete and bitumen in the turn one pit area was hard standing for the various workshops.

The original gates were about 500 metres beyond the current one, and yes they are still there.

My favourite track, was lucky enough to meet Clem there a while back. 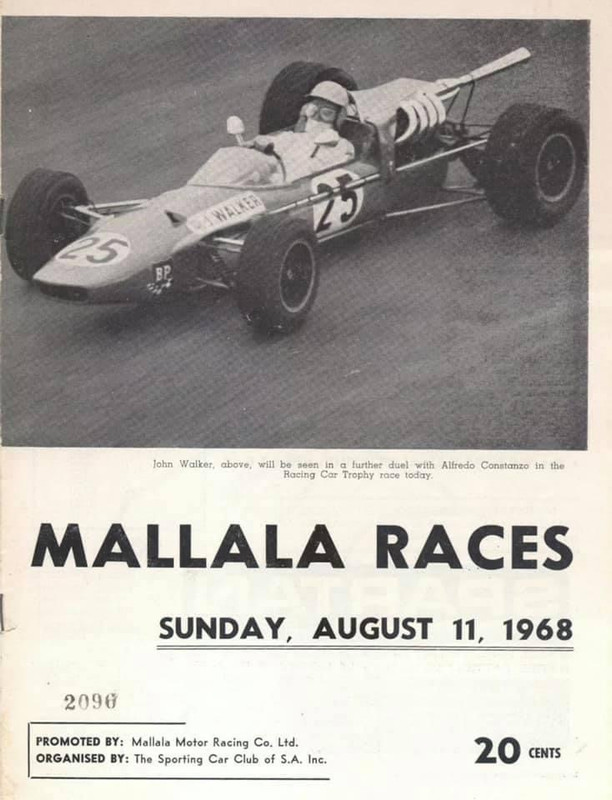 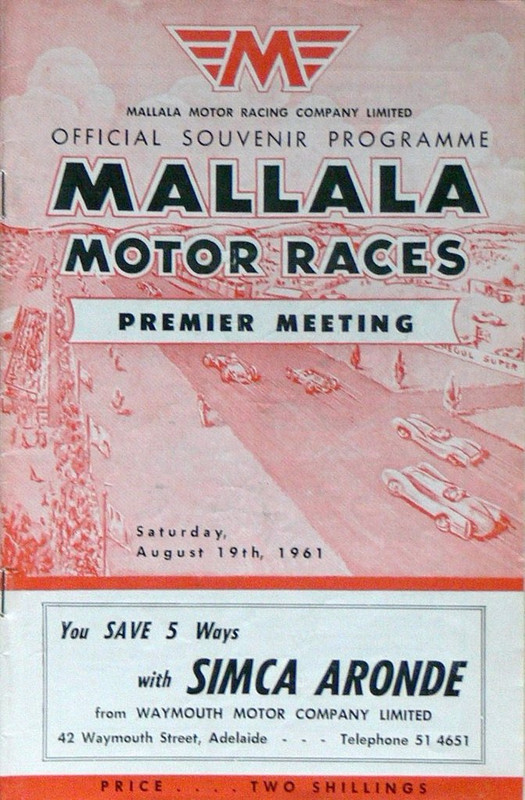 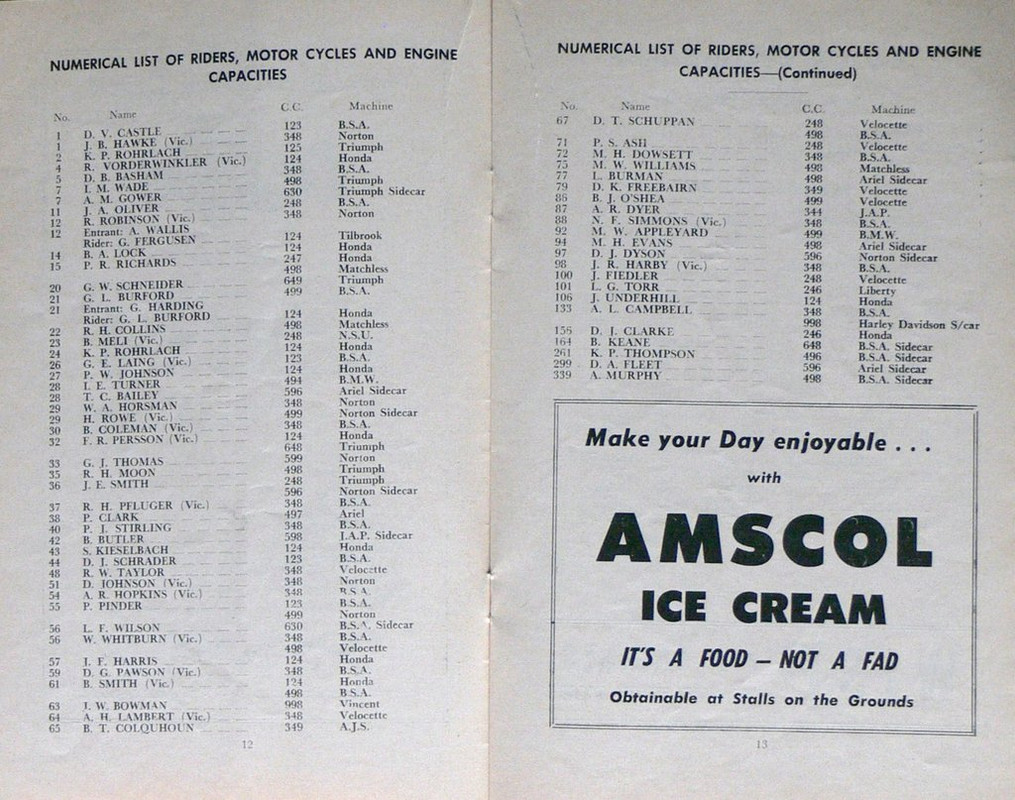 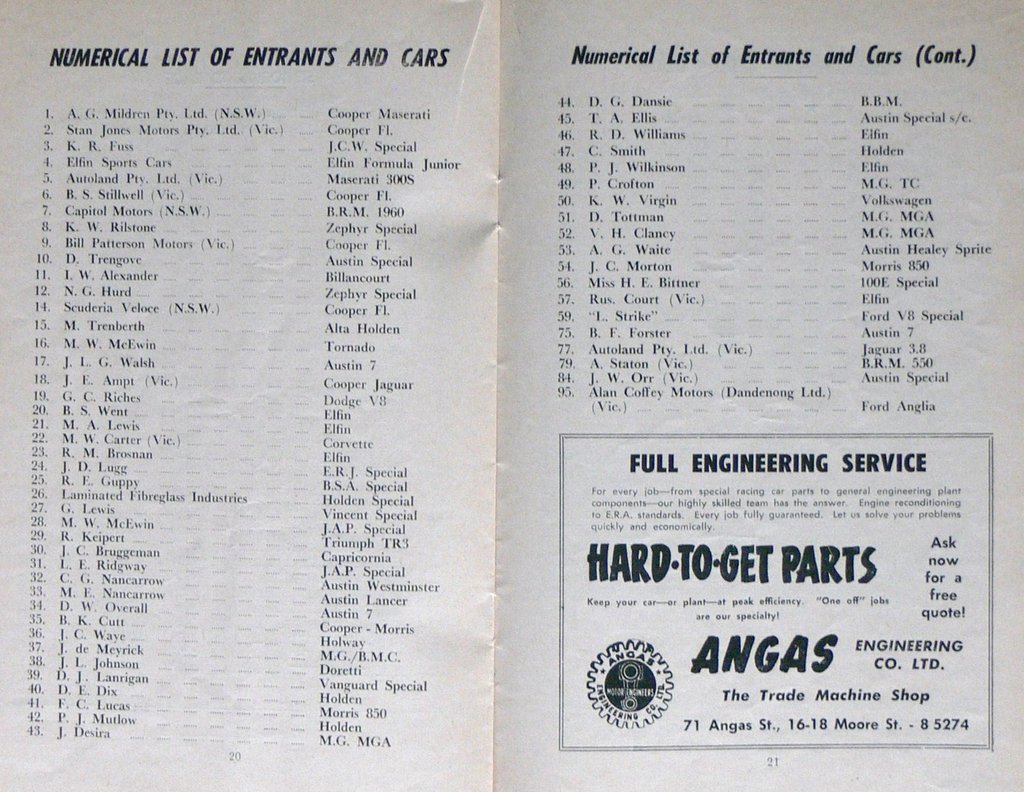 With the Glass BRM already crashed out before the circuit was officially opened.

As the 'Zephyr Special' entered by Keith Rilstone was the Eldred Norman car...

I wonder what the 'Zephyr Special' entered by Noel Hurd was?

Ray, brief details are revealed in the Oct 61 AMS report.

"Second race of the day was a five lapper for division 2 machinery, and this provided an impressive debut for Noel Hurd and his body-less Zephyr special - a 3 carb Zephyr in an Elfin type frame, very low and fast."

No pics, I guess.

As the 'Zephyr Special' entered by Keith Rilstone was the Eldred Norman car...

I wonder what the 'Zephyr Special' entered by Noel Hurd was?

The Noel Hurd built Zephyr Special!! A car still around I think.

I must be old,, I know more names on that list than a current one.

In the bikes, Dave Basham, a very good scrambles rider,

Murray Williams, a very good sidecar rider at scrambles. I once shared a room with him in the Royal Adelaide Hospital.I was in for minor surgery and he was in after crashing his midget at the speedway. And I believe still racing and he has probably a decade on me!

As for the cars, so many names. Doug Trengove, in an Austin Special I feel a friend had for some period and Helene Bittner probably the only woman racing in that time.

Oh and bloke called Smith whose name hung around for decades. In a Holden. But not no 46, his usual number. Or No2 as his Terraplane was at the speedway.

As for the event, I went out Sunday and was disapointed. An ok event hilighted by Hyundias. I really did not see a great number of people I knew or even cars.  I left around 3 pm with a few events to .go. The normal August meeting is always quite good.

A car of note was Bernie Van Elsen's Bolwell, though going slowly. And I feel about the only car I ever raced against. With Sports Cars and Sports Sedans running together, and that was at AIR. I almost ran over Doig as he went under me on the reverse camber. Just saw his helmet.

As for Doig? A part of the furniture at Mallala [and SA racing] for decades and he was not there. Or 2Bob either.