Who is making this presentation?

Can anyone assist with identification, please? I feel as though I should know this, but I am admitting my failure... (I'll be happy to provide a formal acknowledgement to whoever spares my blushes in the new Ickx book!)

Who is making the presentation (or perhaps just posing with) the Belgian Touring Car Championship Trophy with Jacky Ickx in November 1966? 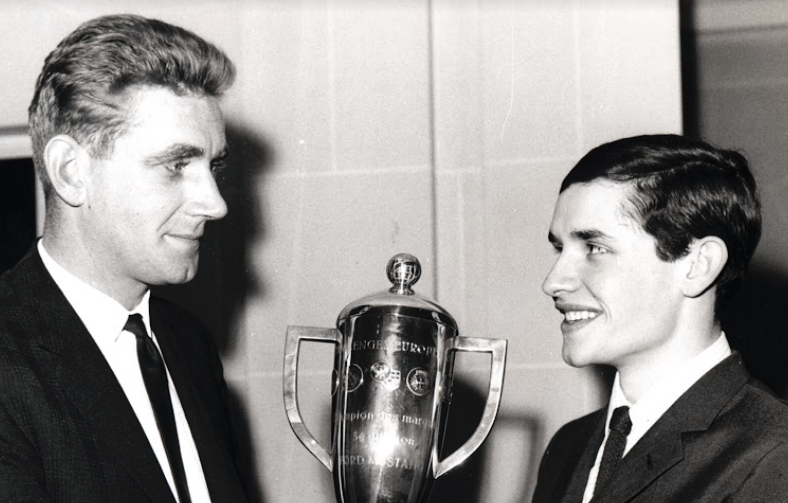 Macca's quite right. Alan Mann. But it took me a while to recognise him!

The photo is interesting. Presumably, Jon, you know the cup to be Belgian Touring Car Championship Trophy? And Jacky certainly won the championship that year, but driving a variety of cars: a BMW in the Spa 24 Hours, a works Lotus-Cortina, and Alan Mann's Mustang.  I can make out 'Ford Mustang' towards the bottom of the trophy, and '......Europe' at the top. Is that 'Champion des Marques' across the middle? '3ème position'?

I wonder whether it's a trophy rewarding the Mustang's results in the ETC, in another championship, or in a specific race. Presumably it could be a Belgian Touring Car Championship Trophy, celebrating Alan's Mustang rather than Jacky's driving.

Actually, scratch the above! I think the photo could be 1965 not 1966! Jacky won the same class at Zolder that year. And Ford Mustangs ultimately took the championship division, with the only other scorer being Pius Zünd's winning Scuderia Filipinetti entry at St Ursanne. Beating Bo Ljungfeldt's Alan Mann entry.

Getting in close to the cup, the inscription says:

I think Vitesse2 has therefore nailed it - this is a 1965 shot of Alan and Jacky posing together as champion entrant and his winning driver, rather than a presentation. Very much appreciated!

Alan and Jacky were, obviously, major figures in mid-1960s touring car racing but were probably mildly embarrassed to be receiving this trophy at all. Adding to what Vitesse has written, in 1965 the Alan/Jacky/Mustang combination hardly entered any ETC races, and Zolder seems to be the only time they finished. The hillclimb events look to have only scored half points so Pius Zund's win wasn't enough for him to share the title. And I believe Zolder and St Ursanne were the only two of the nine ETC events where 3ème division category cars scored points! (Frank's site is usually accurate, but I can't work out why the Pierpoint/Neerpasch Mann Mustang, which finished second at the Nurburgring, doesn't feature in the points table).

But who minds? (apart from Pius Zund!)  Mann and Ickx deserved every accolade going.