28 replies to this topic

This month will see the 50th anniversary of Jo Siffert’s death at Brands Hatch.  Especially in a 908/917, Lotus 49 or BRM P160, Jo was such a charismatic driver – and an engaging personality out of the car.  At Brands that day, having been enjoying the celebration of the peerless JYS’s second championship, the sight of that pall of smoke signified a chilling abrupt end to the event.

But, rather than dwelling on the tragedy, I wanted to establish an upbeat record of his '71 season by writing an account of the forty one races Jo contested that year prior to the Brands 'Victory' meeting.  This takes the form of succinct outlines of Jo's performance/results in each race and is now posted at: https://davidbuckden...ast-season.html

This is a video about Clay Regazzoni, but Seppi's funeral procession is featured at the end, including the 917.

Thanks David, I appreciate you posting this. I had forgotten it is 50 years down the track since that  sorrowful Oct day.

Seppi's last Canadian GP promised great things, but a 1st lap contretemps with Ronnie, left his visor mud covered and his BRM in the ditch at corner 2.  So when he came by 1st time, he was in 17th with the nose badly askew. That was it; all he could do was soldier on to a 9th spot, when a podium or better was definitely in the cards. (He was just .2 back of Stewart's pole time)

I agree it is best to focus on his many achievements.  Seppi is fondly remembered all over the world, one of the most popular racers of that classic era.

Just reminded by an article on the front page of Autosport it was 50 years ago today we lost Jo Siffert.  I'd gotten interested in motorsport in the mid 60's probably thanks to Rob Walker's articles in Road and Track,  and "Seppi" became my favourite driver.  Was lucky enough to see him race in the Can-Am at Road America in the late summer of 1971 not knowing what was just around the corner...

I won't forget watching a late newscast on TV that night (while taking a break from studying during my freshman year in med school) and hearing the awful news... long before the internet.

Visited his grave in Fribourg while on a trip in Europe in the summer of 1982  (just after the Zolder race weekend, but that's another story)...

Seppi was one of my favourite drivers, and I was in heaven at the pairing of Seppi & Pedro in my beloved BRM

I was at Brands the day we lost Seppi (24th October not 21st) and it remains one of the saddest days of my life.

24th October is one of those dates permanently etched in my memory. I grew up in the Channel Islands, so didn't manage to get to a Formula 1 race until I was at uni in England. The 1971 Brands Victory Race was my first, and one of my favourite drivers was on pole, in the glorious-looking BRM P160. As we know, he made a poor start, but was fighting back from 5th position. This was what I had wanted to see 'in the flesh' for years; this was going to be a tremendous race; Jo was going to come through and win - and then ...

RIP Seppi - never to be forgotten. Amazing to think that it’s now been fifty years.

I'd avoided all radio and TV that afternoon so as not to spoil watching the TV coverage from Brands. It opened with a very sombre Raymond Baxter piece to camera ...

Bonnier, Siffert and Clark interview (en francais for the Jos) at the 1965 Villars-sur-Ollon hillclimb, from the archives of the Swiss RTS:

Failed to rendezvous with my group of friends that day, so watched from Paddock as the plume of smoke rose and silence descended. My friends at Hawthorn witnessed the marshals' struggle with inadequate fire extinguishers. Arguably, though, the moment of someone's death is the least significant point of their lives, and Siffert's win for Rob Walker and his hustling of Porsche 917s make for much better Brands Hatch memories.

Was it really 50 years ago? I too was at this race, standing at Clearways. I remember it was a beautiful Autumn day, sun shining brightly and a great race in prospect. At the start Jo was briefly nudged onto the grass at Paddock, but was gaining ground...then.....the memory of the pall of black smoke and the sounded almost complete silence silence still haunt me.

Clearways - same place for me.

I also remember Stewart & one or two others driving back with their helmets off - probably confirming the worst.

I later went to the paddock & saw the car remains being off loaded into one of those lock up garages they had in that era.

Years later a friend told me he was there with a French exchange student who was a Siffert fan. It was his first time at a motor race and he witnessed the whole thing.

Failed to rendezvous with my group of friends that day, so watched from Paddock as the plume of smoke rose and silence descended. My friends at Hawthorn witnessed the marshals' struggle with inadequate fire extinguishers. Arguably, though, the moment of someone's death is the least significant point of their lives, and Siffert's win for Rob Walker and his hustling of Porsche 917s make for much better Brands Hatch memories.

I was spectating at Paddock too and I can hardly believe it is 50 years on Sunday.   I, along with evryione around me suddenly became aware of the silence descending and that plume of black smoke over the trees.   I remember the BRM being loaded into one of the Paddock garages as well.   The day before, I was lucky enough to be in the pits during the Ford Escort practice where the team managers were driving.   Tim Parnell for BRM and Seppi was there too.  He borrowed my race programme to check on who was driving the other cars!   Sad day indeed but memories of a truly great driver live on.

R.I.P.  The circumstances of his sad passing have long stimulated a question that I think I'll start a thread in order to ask.

Seppi was one of my favourite drivers, and I was in heaven at the pairing of Seppi & Pedro in my beloved BRM

I was at Brands the day we lost Seppi (24th October not 21st) and it remains one of the saddest days of my life.

Correct with the date.  I started a thread on this previously - here - and I hope it might be of interest to look at my post which focuses on the many upsides of Seppi's 1971 season rather than the tragedy. 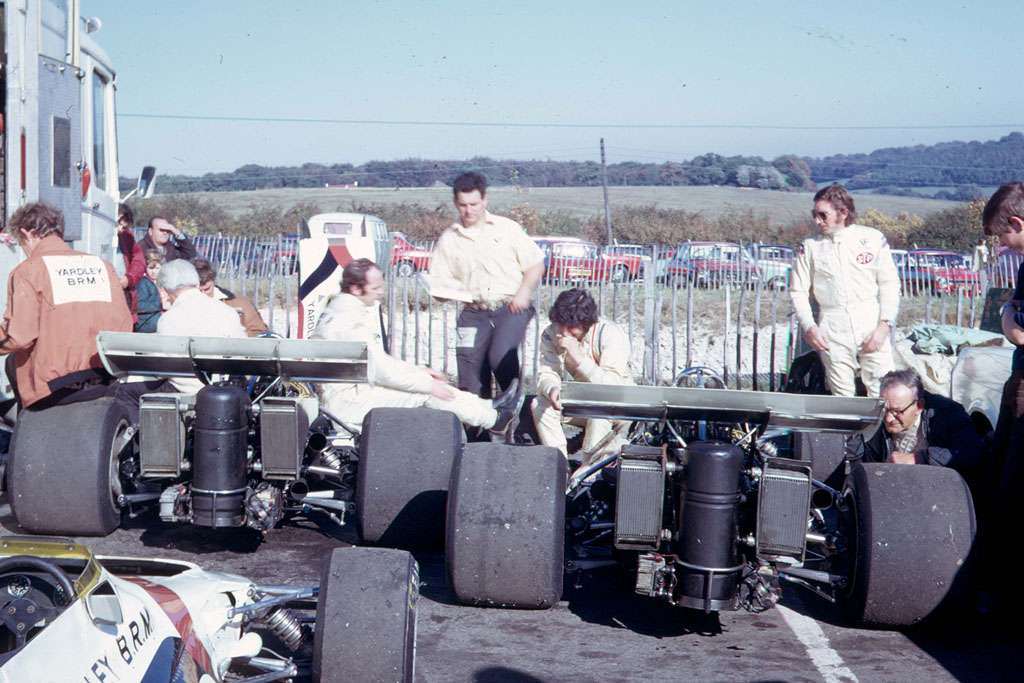 (I meant to include my photo in my original post)

Thanks for posting your poignant photo again Rob.

Such an informal, low-key early seventies scene. I guess drivers, teams and we spectators tried not to imagine that tragedy could be just around the corner.

Great picture and good to see again.   Is that Tony Rudd inspecting something on the far right?

The thing I always remember is the wonderfully warm and sunny autumnal weather that persisted throughout the meeting ( the photo above portrays this well) , and my thought, albeit illogical,  that horrible things like this shouldn't happen on such a beautiful day.

David, thanks for reposting that. Can't believe I missed that review of his last year the first time.


Thank you, I was starting to doubt my sanity. The timing issue was my second thought, the first being that it doesn't look like him anyway!

The Fribourg ice hockey team of the Swiss National League had a special ceremony to honor him before a game (Warning: Porsche 917 being driven on ice) :

It seems that a lot of people who regularly post on this forum were at Brands on that tragic day.  I was too, my father and I having, unusually, decided to take a walk out into the country to watch the racing at the back end of the circuit.  Normally we stayed in our seats, but the weather was good and we decided to get a more varied perspective, despite the excellent view of the first and last parts of the lap we were getting from the startline grandstand. We got to Hawthorns immediately after the terrible crash, when the BRM was fully ablaze and marshals were fighting vainly to control the fire.  I'm afraid that the evident distress of one of the marshals, wearing the full shiny asbestos suit, who had waded into the blaze to try to get the driver out, will forever stick in my mind; as will the sheer number of people making their way towards Hawthorns as we walked away.  It felt, at the very least, wrong and disrespectful to stay on the scene of what was obviously a fatal accident, yet many people were deliberately heading there to see what was going on.  Seppi had featured strongly in my early motor racing experiences, having seen him try to demolish the chicane at Goodwood in 1965, then that fabulous win for Rob Walker at the first British Grand Prix I ever attended, in 1968, winning the BOAC 1000 in 1969 in the Porsche 908 and seeing him in the 917 in the 1970 and 1971 runnings of that event.

I just wish dad and I had stayed in our grandstand seats as we would normally have done, as seeing what we saw close up was very, very sad.

A photo taken earlier in 1971.  By 1973 all three will be lost.  For all the happy nostalga of the times there were some very dark times as well   Thank goodness safety has progressed so much. 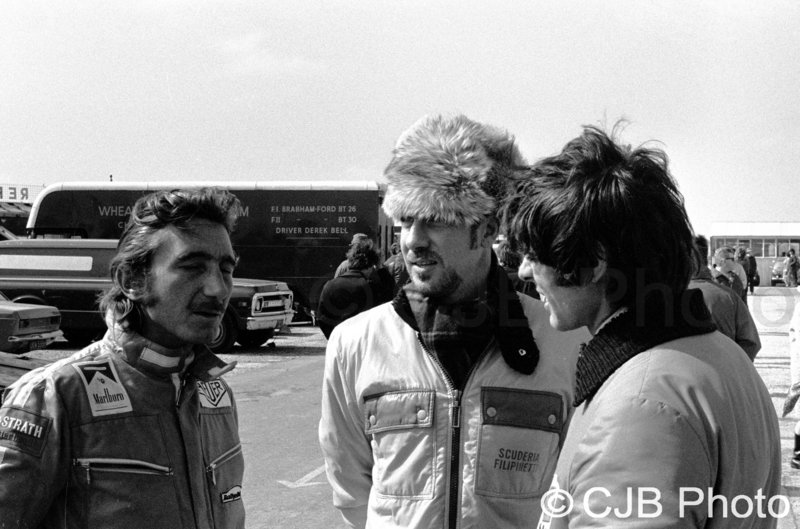 Yes, possibly.  Whilst I am aware of the timings - as per Collombin's post - I thought it might have been Rudd given the "casualness" of that era and the fact that he was obviously well known known to BRM.

I think it looks too old for Aubrey Woods at that time and I don't remember him wearing spectacles ?  It is more like Tony Rudd  and as MCS says he would still be on good terms with BRM.  If not it could just be spectator.

Great picture and good to see again.   Is that Tony Rudd inspecting something on the far right?