Many of you know that I build and race slot cars from earlier times.

I am currently running a 1952 series.  The Maserati A6GCM was a late addition to the series and the earlier version of this car was very similar to the 4CLT, which made it easy for me to create a body of that as I already had a 4CLT buck to work from.

However, the 1953 version was quite different.  As far as I have discovered, there is no commercially produced 1/32nd scale bodyshell of this car, so I set to to make my own.  Google images offered me an excellent side on view of the car and I based my wooden buck on this, with the 4CLT wheelbase as my base line and every other dimension scaled up from that.

Recently, I bought a commercially produced Ferrari 500 shell from which I have cast seven cars to be used in my races.  I got quite a shock when I looked at the Ferrari shell because it looked so big.  I checked the dimensions of the real car, which are available on line and found that my Ferrari is just about spot on for size.

Unfortunately, when I put my Maserati next to it, it looks like a toy car, being miles smaller than the Ferrari.  So, I think I have got it sadly wrong, but there seems to be no information available on line that gives accurate dimension of the 1953 A6GCM.

The odd picture that shows Ferrari and Maserati in close company seems to show that they were not that much different in size.

Is there anyone out there who can point me in the right direction for Maserati dimensions?  Just the wheelbase would be enough as I can scale everything else off that.

What Maserati published for the A6GCM was - original model 2,280 mm (90 inches) - 1953 'improved' version 2,310 mm (91 inches).  From personal experience the truth is that there was considerable variation of individual set-up wheelbase lengths, on some often battered, much repaired examples variation in wheelbase from one side to the other...

2310mm is also the figure given by Pritchard in Maserati - A Racing History (p248), although unlike Doug (and Wikipedia) he doesn't differentiate between the 1952 and 1953 models. His figures for front and rear track are also the same as Wikipedia quotes for the 1953 version.

I'm amazed to find that I had it right all along.

When I build up one of the Maseratis, I will put a picture on here for comparison purposes.

Well, gentlemen, further to the above query, I confess to still being amazed at the difference in size between the two cars.

I checked the available dimensions for the Ferrari and extrapolated them to suit 1/32nd scale and it seems that the two slot car bodies in question really do come out as different as the sizes would suggest.

I offer the following evidence.... 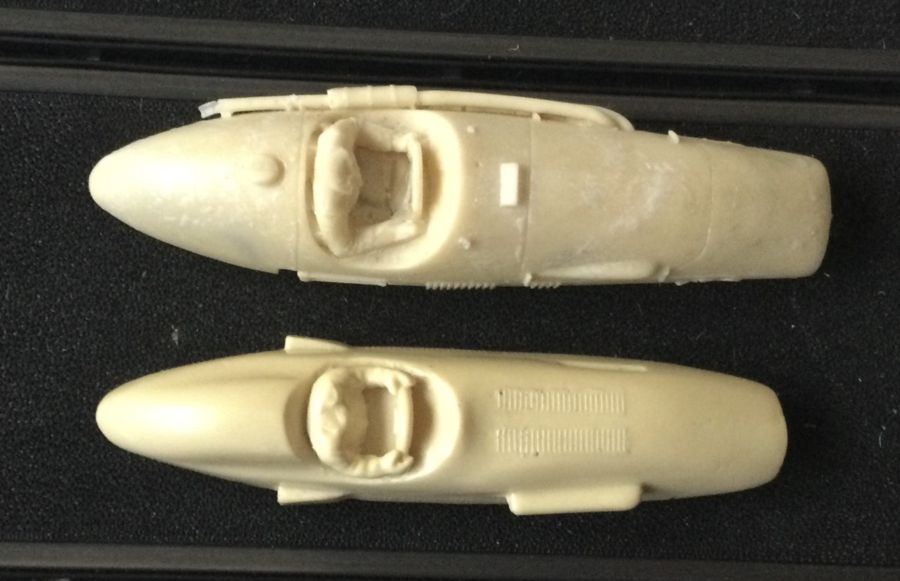 The strange thing is, the wheelbase of the Ferrari is quite a bit shorter than the Maserati.  I guess the Ferrari was all nose and tail!

Blimey, ls the driver of the top car some kind of superman! Look at the width of those shoulders...

It doesn't surprise me that the Maserati is shorter and lower than the Ferrari (whose graceful tail extends to a point). However, I am surprised that the Maserati bodywork is so narrow. I was expecting it to be closer to early 250F width across the cockpit. (Also, the Ferrari body looks wider than the one I made long ago, though I've never been happy with my own effort).