A longtime family friend of my spouse who hails from Kent recently sent us a print of this image, which she believes she shot at Brands in 1965 – or possibly '66. She's not a gearhead, and doesn't recall the details of her visit to the track, other than she and her boyfriend at the time arrived late in the day, and spent their time walking the paddock looking at cars. Nonetheless, she's particularly fond of this image, even though she relied on us to identify the driver for her.

We'd hoped to provide more of a backstory for her, but we're stumped as to which race this might have been. Here are the facts we know (or think we know):

So, can anyone shed some light on what race this was, or why there's a #6 BRM behind him? Alternately, does someone recognize the trophy that JYS is holding? 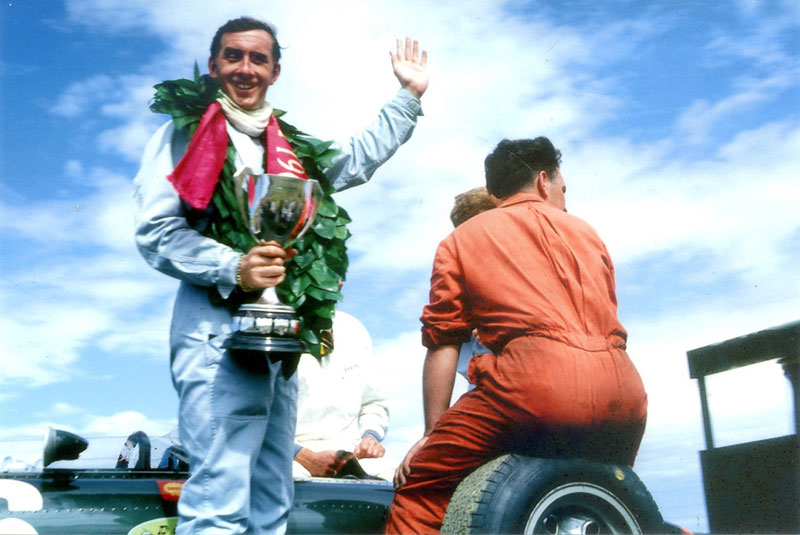 There are various photos of the actual Lady Wigram Trophy available online, and it’s a different design and larger than the one in the photo. My vote therefore goes to Teretonga 1966, but with luck some of our Oz or NZ members will have better info.

Edit: here’s a photo of Bruce McLaren receiving the Teretonga Trophy in 1959. The lid seems to have been lost by the time it got to Jackie seven years later, but otherwise I’d say it’s very similar to the one Jackie is holding. 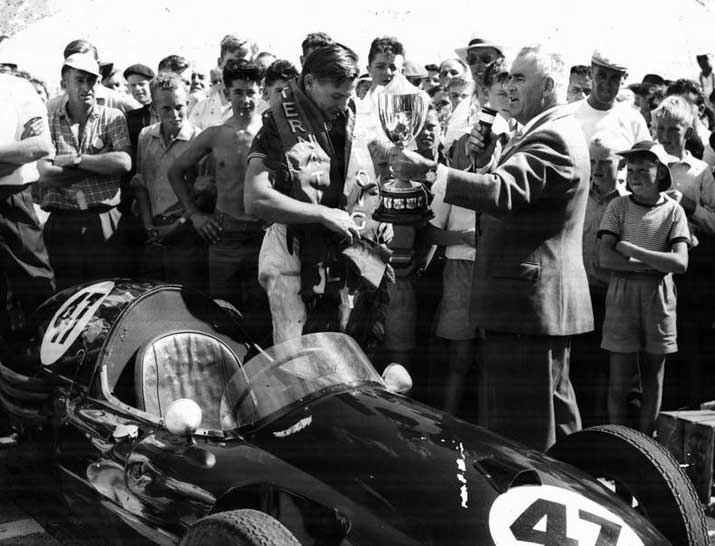 Further edit: in BRM Vol 3 there’s a photo of Jackie after his Teretonga win, wearing the laurel wreath and sash and holding a glass of bubbly and the trophy. It’s definitely the same trophy.

Tim's comments seem to make sense. My comment is that she must have had a bloody good lens on that camera.

Tim's on the money, so hopefully wildman's friend did visit NZ?

The No 6, Shell and Dunlop decal positions fit for 29/1/66 Teretonga Tasman meeting.

These decals only appeared at the four 1966 NZ races. Photos show that they were obviously not permitted at the Australian races, and would certainly not have been allowed at any UK F1 event before 1968.

Could she, or the long lost boyfriend, have bought it some kind of concession stand at Brands?

Leaving aside how a trip to Brands Hatch netted a photo of a race winner in NZ, I wonder why the red sash on the laurel wreath appears to have the year 1961 on it?  When neither the car nor the driver would have been there?

Sorry, I am not really Alan Partridge!

Then the question is why is Jackie wearing the wreath upside down?  Or is that just a Southern Hemisphere effect?

I imagine the wreath orientation was determined by whoever put it round his neck. I hope Doug won’t mind my quick snap of the photo in BRM Vol 3 mentioned above: 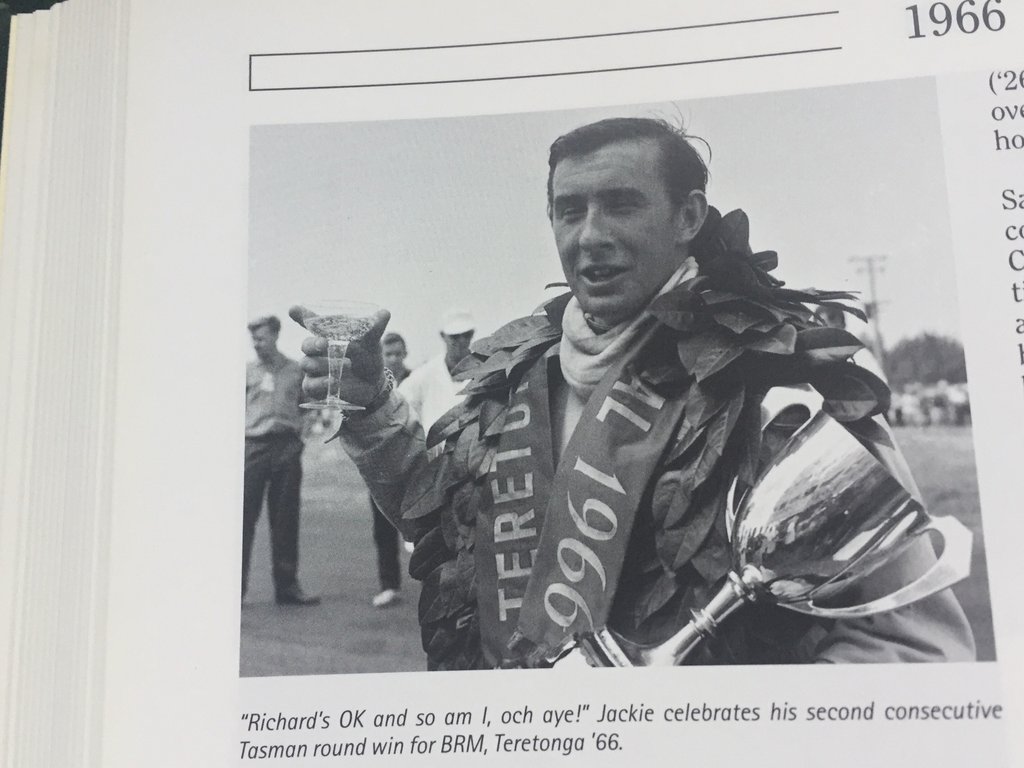 Could she, or the long lost boyfriend, have bought it some kind of concession stand at Brands?

Either the photo might have been bought at a concession stand at Brands selling photos, or perhaps it was some sort of free hand-out being given out by the BRM team to spectators?    In American racing that was fairly common, I don't know if Lord Stanley would have paid for free PR handouts like that.  Did JYS have an organized fan club then?

It seems highly unlikely that wildman's friend, a Kent native, would have confused a trip to Brands with a trip to New Zealand (which she quite possibly never made)!

Either the photo might have been bought at a concession stand at Brands selling photos, or perhaps it was some sort of free hand-out being given out by the BRM team to spectators?

A free hand out seems the likely explanation. Possibly a Shell or Dunlop freebie.

I imagine that only local photographers would have ventured as far south as Teretonga so I cannot imagine photos ending up on sale at Brands. Euan Sarginson's pics were used by Autosport in those days.

Yes, who is this Pommy nouveau arriviste with nothing but the Italian Grand Prix to his name?


Yes, he only had numerous Formula 3, Formula 2 and sports car wins, the 1965 BRDC International Trophy and the 1965 Italian Grand Prix to his name at that time.

I think Ray was joking about the 'upside down' wreath.  I am sure he knew very well that Jackie had already arrived on the scene properly.

I think Ray was joking about the 'upside down' wreath.  I am sure he knew very well that Jackie had already arrived on the scene properly.

Of course he was joking. After all JYS had added the Lady Wigram Trophy and the Teretonga Trophy to his collection by the time he arrived in Australia.

More JYS Champers celebrations... although this time in Oz. 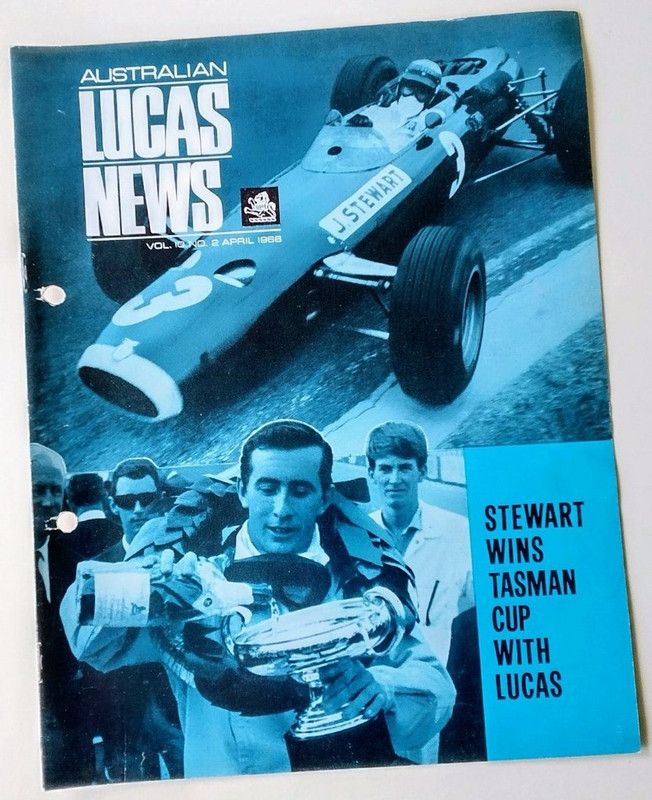